Czech and Slovak Festival at the Bohemian Hall and Beer Garden 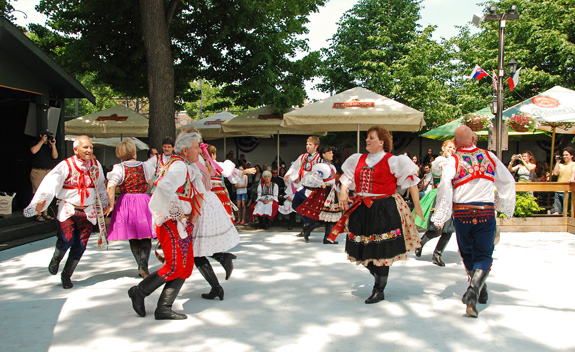 It’s worth mentioning the Bohemian Hall’s long history. At the end of the 19th century, many Czech and Slovaks fled Austria-Hungary and settled in Astoria. In 1910, the community purchased farmland and turned it into an authentic European beer garden, which has survived for over 100 years. 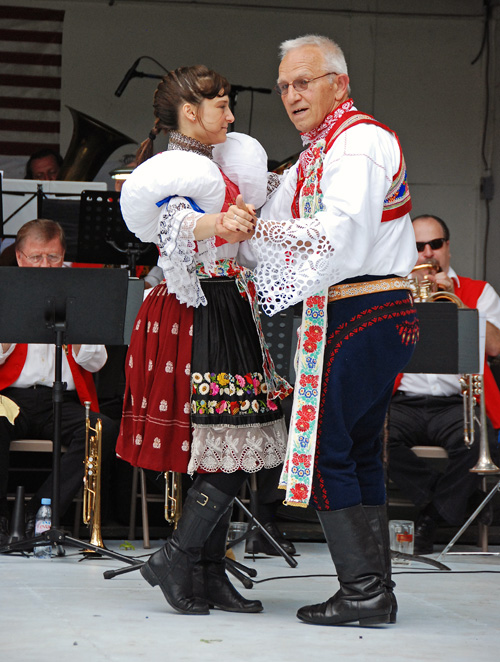 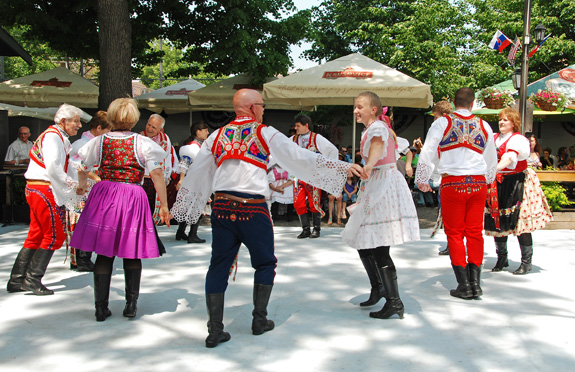 This being Memorial Day weekend, we were also administered a triple dose of national anthems — Czech, Slovak, and American: 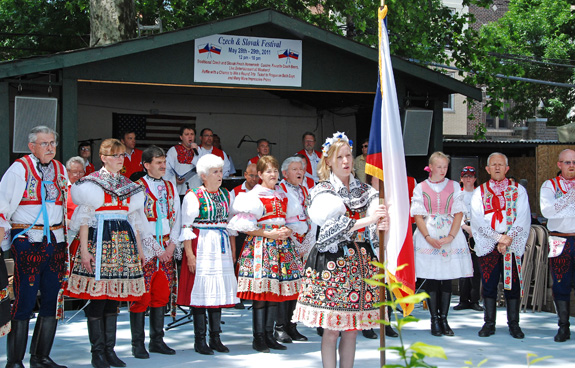 Some traditional dancing revolved around the valaška, or shepherd’s axe: 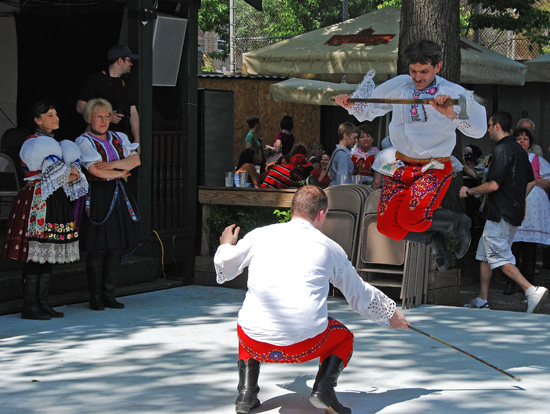 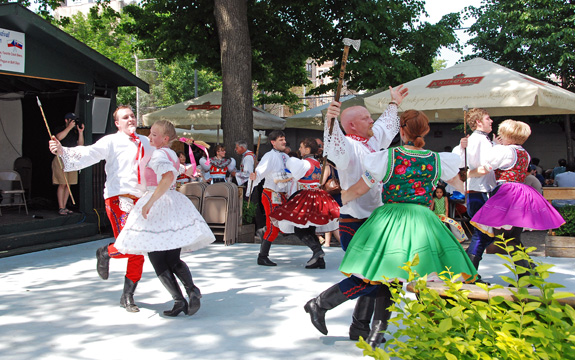 Of course, we didn’t come just to watch grown-ups gesticulating with hatchets. We were also there to taste the food, and the Bohemian Hall offered a special menu for the duration of the festival. Since the dishes were prepared in advance and kept on a steam table, it would be unfair of me to make a formal review. So here is a short account of the things we tried.

The pierogies came with two fillings, potato and mushroom. While the smaller mushroom ones were a little bit dry, the potato half-moons were moist and greasy (in a good way): 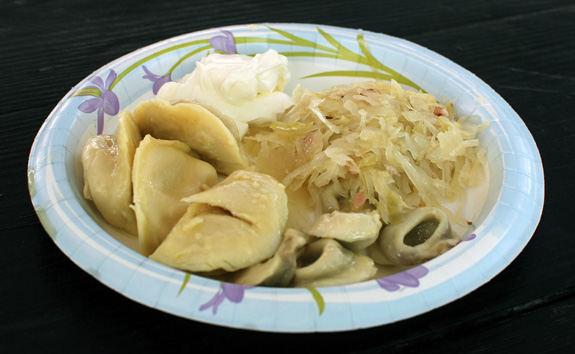 The homemade potato pancakes, served with a classic apple sauce and sour cream, contained way too much garlic: 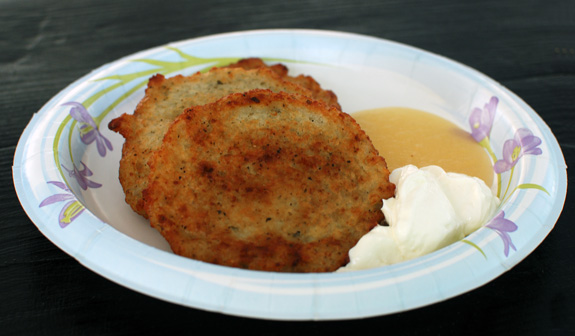 The Moravian stew, with its traditional bread dumplings, consisted of tender cubes of pork in a caraway sauce. Quite nice. 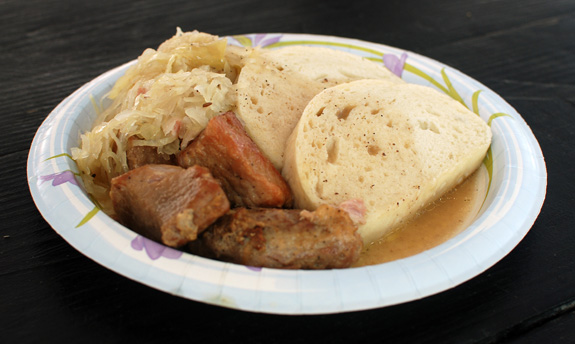 Later in the afternoon, a long line formed as the outdoor grill started serving sausages and burgers. Here’s the country klobasa with fries. The klobasa was smoky and juicy, just how I like it. The crispy fries weren’t bad either! 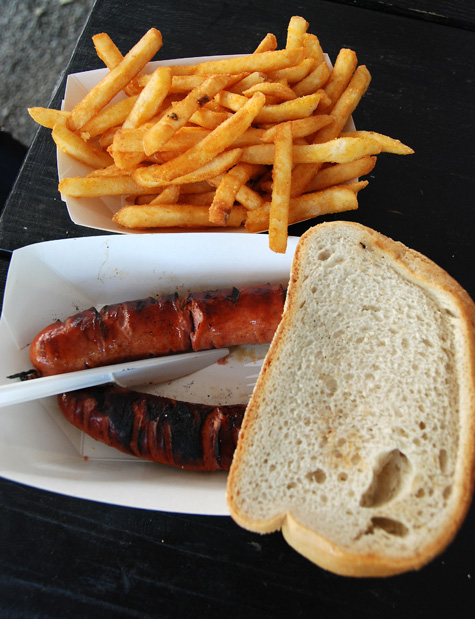 There was even a welcome dessert stand, selling apple štrúdl, prune and cream cheese koláč, and a mixed berry cake. We only had room for the strudel, which, unfortunately, was dry and embraced the unpleasant American habit of drowning all apple desserts with cheap cinnamon. 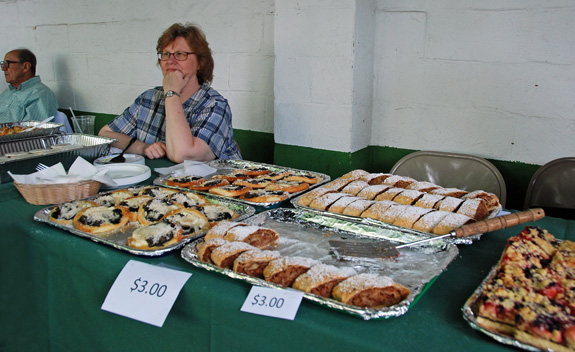 All in all we had a very nice time at the Czech and Slovak Festival. But one final complaint: $8 for a shot of plain vodka is way too much money!

The beer garden in Astoria was a favorite spot for my wife and I, we frequented it quite often during the summer months. The food was decent, I only wish the menu was more extensive.

[…] flour of the Bohemian National Hall. And unlike its compatriots (such as the nearly homonymous Bohemian Hall) this is not a beer garden. Far from it, in fact, as I would regard Hospoda as the first attempt at […]

[…] which means chalet in Slovak, is located in Astoria, not too far from the Bohemian Hall and Beer Garden. And as you can see from the frontage, it bears the peculiarity of serving cuisine from a country […]

[…] are also special menus for certain events, like the Czech and Slovak Festival that I wrote about a couple summers ago. Or the annual Porkfest which I’m going to talk about […]