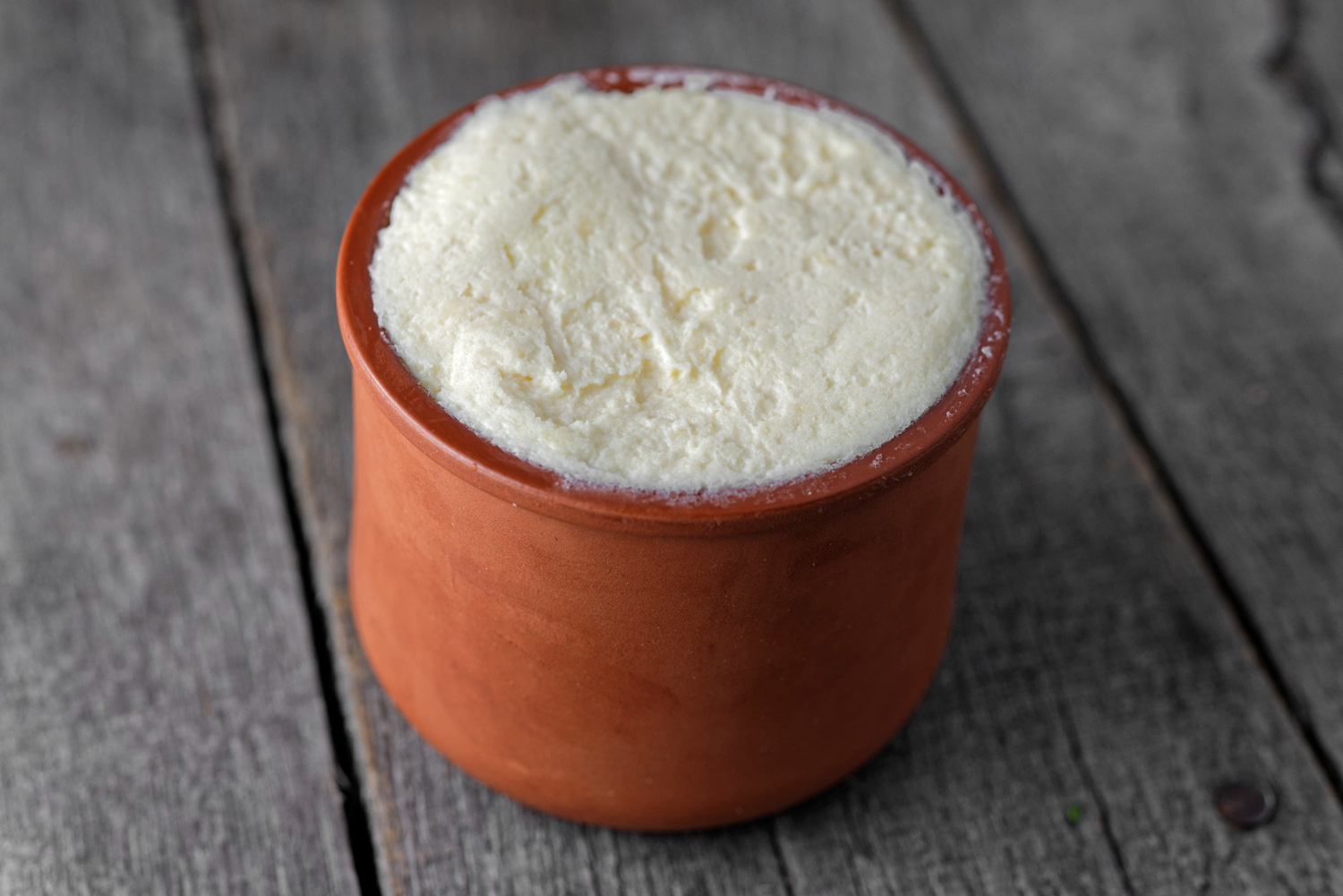 With my series of posts on Montenegro now well under way, there’s one essential ingredient I need to talk about in more detail: kajmak. Also known as skorup in some areas, kajmak is to former Yugoslavia what butter is to France: you spread it on your lepinja for breakfast, melt a dollop on top of your pljeskavica or Njeguški stek, and mix it into cornmeal to make cicvara (recipe coming soon). You can even make baklava with it! There’s only one problem: you generally can’t buy it anywhere else in the world.

If you’re familiar with English food at all, you might say kajmak is essentially a variation on clotted cream, wherein the starting ingredient is milk rather than cream. As Harold McGee explains in On Food and Cooking, heating the cream (or milk in our case) in a shallow pan “accelerates the rise of the fat globules, evaporates some of the water, melts some of the aggregated globules into pockets of butterfat, and creates a cooked flavor.” In the process, some of the milk proteins also coagulate, and the fat globules cling to the film that they form. After letting the pan rest for 12 to 24 hours, you can collect from the surface an almost solidified layer of protein and fat. Mix it with salt, let it drain, and you get kajmak! The final product is a rich, firm spread, halfway between cheese and butter, that will melt easily on your favorite hot foods. Want to learn even more about kajmak (if you speak Serbian)? Read this! Or check out this video to see young kajmak in the making:

Go to Podgorica‘s Green Market, and you’ll see row after row of farmers selling their cheese and their kajmak. The young kind is now often sold from plastic tubs that replace the traditional karlice, a long shallow wooden bowl that doubles up as a cooling vessel for the heated milk during the fabrication process. But the mature kind is still kept in a wooden vat called čabrica, so that during production, layers upon layers of salted kajmak are stacked until the vat is full. Mature kajmak can ripen for several months, and the bottom of the vat generally allow for the drainage of any additional liquid.

Unfortunately, real kajmak seems impossible to find commercially in the US. Maybe if you have Serbian friends – I recently asked the staff at Kafana in New York where they got theirs, and they implied to me that Serbian connections in the area prepared it for them. Otherwise, based on what I explained above, a decent substitute would be clotted cream mixed with salt. The Devon Cream Company‘s products are now pretty widely distributed in the USA, even if some folks complain that they’re not as good as the homemade stuff. Many cooks also choose to create a kajmak-like mixture by combining various dairy products such as feta, cream cheese, and cream (I have previously done this; see my recipe here).

But today I’m putting on my Manhattan dairy farmer hat and making my own! There are very few kajmak recipes in cookbooks or online, perhaps because once you know what to do, this is pretty trivial: like churning butter. Literature in English is even scarcer, as hardly anybody even knows what kajmak is outside of former Yugoslavia. If you’re not Serbian, you’ll probably find that this post is the most exhaustive article on the subject! Let’s go through a few preliminary notes before the recipe:

Thanks! My first taste of kajmak was the authentic stuff made by a farmer in Serbia so the butter/cream cheese spreads US stores try to pass off just doesn’t cut it! I bought RAW organic Jersey cow milk from a nearby Amish farmer. Kajmak doesn’t work with homogenized milk (because they break up all the fat into tiny globs to distribute it more evenly through the milk). Not to mention there is just a lot of food fraud in industrial farming in general so the stuff off the supermarket shelf will probably disappoint for this recipe. I tried the oven method and stovetop. Both worked for me but you do start to get caramelization of the milk solids on about the third heat. I think two heatings is the limit. Also, being an impatient sort, I skimmed early and often so I don’t think I got as much kajmak had I just waited the 24 hrs. If you use raw milk, this recipe works to make authentic kajmak.

Hey, would you mind helping me out, I’m a home style chef out of Brooklyn, I use to get this all the time from my Cro/Bosnian friends back in the day, and they used to always say how hard it was to make it but I’m going to do all three the Kaymak the Lepinja and the Cevapi from scratch. My question is after you skim the top do you re do the process with the same milk or do you have to keep using new milk.. Kick ass article too beautifully laid out !! Great Work!!!

Hey Thomas, glad you liked the article! You use the same milk over and over.

Do not ask Bosnians and Croats for Cevapi, Kajmak and Ajvar. None of them knows how it was really made, as they started to make it with the formation of Yugoslavia (in Bosnia), and in Croatia after 1960.
– Cevapi were made to avoid Turkish taxes over non-muslim population. Muslims were making kebabs on long skewers, and Serbs on the other hand, formed cevapi (cevapcici) by hand.
As they were smaller, Turks have did not tax them. The length of cevapcici was equal to the palm width, and their diameter was what you get by joining the first knuckle of your pinky finger and the tip of your thumb. They were made by apprentices (12-16 year old) as they have smaller hands.
– Ajvar is coming from east, south east Serbia. Traditionally made to substitute expensive sturgeon fish roe – the caviar. Hence it is ether hand chopped 0.4 -0.6 cm or minced to the same size. Original Ajvar has only red pepper, oil (or lard) salt and vinegar.
– Kajmak was made all year round to be used for cooking, as a spread and in pies. As cattle was in highlands (land in the valleys was forcibly taken from Christians), the only way to save milk was to make cheese, and while milk fat (butter) was used for cooking and as the cattle was high in the mountains, and there was no time to churn butter, they were making kajmak.
Although all 3 words are coming from Turkish, you will not find any similar product in Turkey in terms of taste, ingredients, look and shape.

Actually neither ćevapi, ajvar, or kajmak are Serbian. Ćevapi are the Bosnian version of the generic Turkish kebab, a type of meat patties. Ajvar was actually first produced in Serbia in Belgrade however it was invented by a Macedonian cook who was the owner of a restaurant in Belgrade. As he was of Macedonian origin he was importing large amounts of red peppers which are grown abundantly in Macedonia (but are not commonly grown around Belgrade) for serving the customers of his restaurant and used them to invent a new dish which he named ajvar which is the Turkish word for caviar. Kajmak is very common across all the Balkans, Anatolia and Middle East and nobody really knows where it originated, but it is definitely older than the Serbian people are. The origins are probably in the Byzantine or Persian empires. Now it is made everywhere from India to Slovenia. In former Yugoslavia, the traditional kajmak producing regions were South Bosnia, Southern Serbia and Montenegro (all heavily mountainous regions). In most of Serbia (northern and western Serbia, Vojvodina, which are all flat) kajmak was never produced traditionally but spread there only recently.

Thanks for the recipe Florian, I really love old Kajmak. Is there any way to store it to age it or do I just add the higher salt content and leave it in the fridge for a longer period?

Hi Lewis, I think you should be able to age it in the fridge. Maybe keep it in a colander over a bowl, covered with plastic wrap. Don’t increase the amount of salt (the kajmak will naturally become saltier as it becomes drier).

probably a silly question but – why not just salt the milk and cook it like that? wouldn’t that ensure even distribution of salt through kajmak?
i also remember, many decades ago, when i had original kajmak from the market in belgrade, that it was not uniform in colour, so i don’t think that it was mixed after it was scooped off? it also had very different texture to that pictured above.. more like on this page

Hi Sabina, mixing the kajmak or not is up to you. I think that most if not all of the kajmak I saw at markets was mixed. The first picture in the article you sent looks like the skin that forms on top of the milk, without mixing. I think the skin is thicker in that picture because the farmer would be using raw milk. Adding salt to the milk would produce an inconsistent product because you don’t know ahead of time how much kajmak you’ll have exactly. It could also be that the salt ends up being more concentrated in the skin or in the remaining liquid.

Hi Florian,
Im going to try a scratch meal of Cevapi, Leskovački Ajvar (no eggplant), Lepinja, and now Kajmak. Ive made Cevapi and Lepinia before. The Kajmak and Avjar doesnt seem too difficult.
There are a few dairy farms around I can try for fresh milk from. Holstein cows. I can by 3% milk in the store.
Anyway, can I make half batches with this heating method?

Is there any reason it has to remain at room temperature for that long as opposed to just going into the fridge after it cools? I’m curious what your thoughts are on this?

Hi Tony, I think that the higher temperatures help the thick layer form on top of the milk. The two hours in the fridge are only meant to make that layer more solid and easier to skim out. The timing was also adjusted to have 24-hour cycles, which makes things much easier for the cook. You might be able to obtain similar results with less room temperature time, and maybe you can even avoid having to wake up in the middle of the night to repeat the steps… Let me know!

Thank you so much for this excellent recipe, Florian. I stayed with a family in rural Serbia a few years ago and put so much kajmak on everything that they joked that they should get me a bigger spoon. Now that I can get raw Jersey milk from a nearby Mennonite farm, I can make my own real kajmak, thanks to your help. My first batch finished today and I am looking forward to sharing it (well, some of it, anyway). It is fabulous. Many, many thanks.