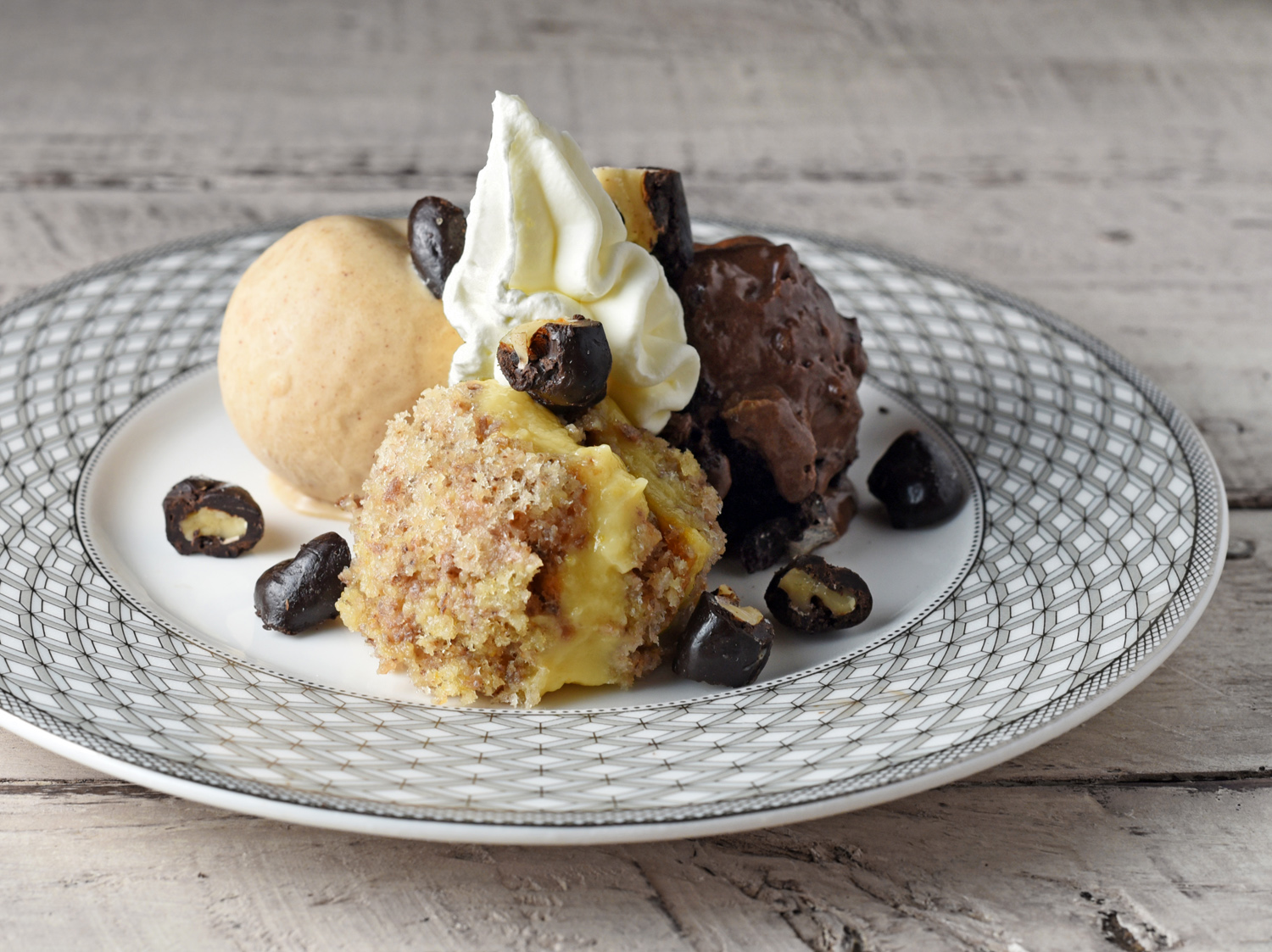 You’ve probably never heard of Somlói galuska, and yet it is one of the Magyars’ favorite desserts. For some unfathomable reason, it doesn’t even appear on the menu at André’s Café. The name translates as “Somló dumpling” in English, Somló being a town near Lake Balaton, famous (moderately) for its hill and its wine. Calling it a dumpling is a tad misleading, as what we’re really talking about starts as a trifle-like cake made of several layers of sponge, custard, and raisins, and is then scooped into balls and served with whipped cream.

The Somlói galuska (shall we call it SG?) was invented in the late 1950s by Károly Gollerits, long-time head waiter at the famous Gundel restaurant in Budapest. If you think about it for a minute, this hardly sounds like a guarantee of quality. Gundel in the ’50s had fallen victim to nationalization, the quality of the food sharply declining against a backdrop of sociopolitical repression, economic turmoil, and plummeting standards of living. Also, correct me if I’m wrong, but dishes are generally created not by the front of the house, but by the back (you know, the people who actually learned how to cook). So far, this all seems more like the ultimate shortcut taken by an aging waiter, pushing the boundaries of communism’s sloppiness by dumping lumps of cake onto a plate instead of bothering to cut normal slices…

Not so fast! It turns out star waiter Gollerits merely imagined the dessert. The execution was handled by pastry chef József Béla Szőcs, who, before coming to Gundel, trained at the equally famous Patisserie Gerbeaud. Szőcs decided to name the creation after the place he came from, where he apparently operated his own pastry shop as well — the Somlyó hill in Fót, on the outskirts of Budapest, a hill that’s technically too small to really be called such, and which was declared a nature preserve to protect its 1,500 species of butterflies. That’s Somlyó with a Y in it.

The dwarf hill of Somlyó had nothing to do with the more legit hill of Somló, until Brussels decided otherwise. At the Brussels World Fair of 1958, SG was served at the Hungarian pavilion. Legend has it that at some point there, the name was misspelled, and Somlyói galuska became known as Somlói galuska, advantageously trading the obscure hummock for its viniferous near-homonym.

A typical SG is nothing simple, which voids any suspicion of sloppiness. It contains three different sponge cakes: plain, chocolate, and walnut. The sponges are arranged into layers, alternating with pastry cream and raisins soaked in rum. Then you grab your scooper, and serve three scoops (always three: Christian country –> Holy Trinity –> three of everything, I suppose), garnished with your favorite toppings.

There are many places where one can try SG in its natural habitat (Hungary, that is). In Budapest, for the two entirely opposite ends of the spectrum, head to Gundel for a take on the original Somló Sponge Cake à la Gollerits, or to Onyx for the more modernist Somló 21st Century.

I haven’t been to Budapest for over ten years, unfortunately, but I did have the opportunity to try SG in a couple places during a recent trip to Sopron. The Erhardt Restaurant and Pension is where I had my first SG ever. Erhardt delivers a solid execution of the classic recipe: three scoops topped with a mound of whipped cream, chopped walnuts, and chocolate sauce, though I can’t tell if there are really three different sponges or only two. This in fact encapsulates my first impression of SG: a quite unusual dessert where it’s pretty hard to identify all the elements and flavors. The pastry chef at Erhardt is quite scooper-happy and also serves the chocolate mousse in scoops (this isn’t unique, but you’ll see later that it got me thinking).

Out from the center of town, the Harrer Chocolate Factory isn’t just a chocolate factory that offers guided tastings (although that’s certainly the main draw), it also hosts a café serving a variety of pastries. There seems to be a trend to serve Somlói as a cake rather than dumplings, and that’s how it’s done at Harrer. The layers are clearly apparent, which certainly helps me figure out what I’m eating. From bottom to top, the layers are: boozy chocolate sponge, pastry cream, walnut sponge, pastry cream, plain sponge, macerated raisins, and cocoa powder. It tastes very good, probably better than Erhardt’s, but conceptually, the cake approach feels more like a step back than a step forward.

And that’s the thing about SG. The pairings are very classic — even tired, you might rightfully say: chocolate, walnuts, raisins… However, for me, the appeal lies elsewhere. The SG is a rare example of a plated dessert, not just a slice of cake served à la mode, or a crêpe that obviously couldn’t be eaten if it wasn’t served on a plate, or a couple of ice cream scoops in a bowl. The SG is something that starts as a bona fide cake — a rather complicated one — and is deliberately turned into something else.

So I’ve tried to tackle the issue of the boring flavors pairings, while still preserving the quintessential scoops of the original Somló dumpling:

This is definitely a lot of work, but each element isn’t that hard to make in itself and can be prepared ahead of time. One quick note about the egg amounts: I’ve measured the eggs in grams for better accuracy. If you’re wondering how many eggs you need, one large egg without the shell weighs about 50 g (15 g yolk and 35 g white).

I had a chance to sample it when I visited Budapest earlier this year. It was DELICIOUS! So glad to have the recipe now! Thank you 🙂

The first sentence I read is “You’ve probably never heard of Somlói galuska”. I looked it up without knowing how to spell it when I was reminded of it by a segment on Better Homes and Gardens about Hungarian dumplings. I had somloi galuska in 1976 when in Budapest and have never forgotten it. So pleased to now know what ingredients were in it and to have a recipe. Just need the health & energy and I will be able to try making it myself.