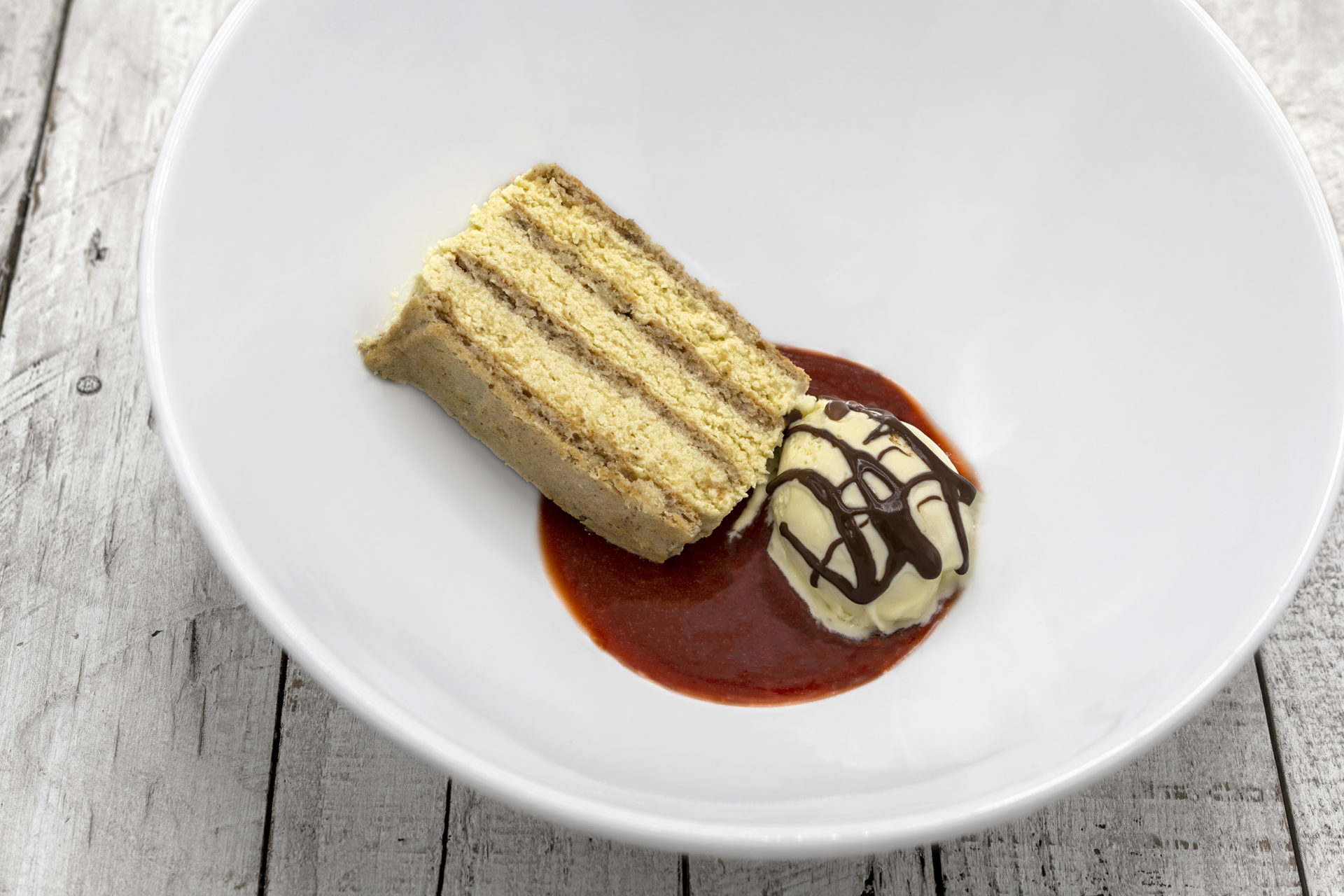 The Esterházy torta is one of Hungary’s most famous desserts, alongside the Rigó Jancsi, the Somlói galuska, the Zserbó, and the Dobos. With its buttercream and macaron-like nut cake, it’s a very classic layered confection. Yet its origins are rather unclear…

Budapest, first half of the 19th century. A Hungarian noble family with roots in the Middle Ages, the Esterházy dynasty distinguishes itself by its consistent loyalty to the Habsburg rulers, its extensive landholdings, and its wealth. Unlike most of his ancestors, who served as military officers, Prince Paul III Anton Esterházy de Galántha (1786–1866) pursues a career in diplomacy. After occupying posts in Paris, London, and Dresden, he returns to Hungary in 1842. Known for his fabulous extravagance, he manages to spend beyond even his considerable means and supposedly ends his life in comparative poverty. And just like that, the story goes, some unknown confectioner in Budapest, at an unknown date and for some unknown reason, decides to name a cake after the man, and it quickly goes viral throughout the entire Austro-Hungarian nobility…

The Esterházy torta consists of flavored buttercream sandwiched between layers of a cake made with almond and meringue, then iced with a white fondant glaze and decorated with a characteristic chocolate striped pattern. But since its creator never published the recipe, variations abound without anyone being able to claim that they hold the true original version. First there’s the cake. In Hungary, the original almonds have been widely replaced by walnuts, although as recently as 1964, the famous chef János Rákóczi, in his book Konyhaművészet [Culinary Art], still listed “almonds or hazelnuts” as the proper ingredients. Debates also rage over whether there should be four layers or five. Then there’s the buttercream. Is it really a butter cream? Do you mix it with pastry cream? Do you use egg whites too? What is it supposed to be flavored with: rum, amaretto, cognac, vanilla, coffee? And does the flavoring really go into the buttercream, or is it used to soak the cake?

If you remember my review of Textúra in Budapest, the chef there has revisited the Esterházy torta: coming down on the four-layer side of the fence, he serves a cake slice laid down on the plate, topped with whipped cream and cocoa powder, accompanied with walnut ice cream; the obligatory white fondant with its dark chocolate pattern is relegated to a little square, a mere garnish.

From Textúra’s creation, I’m keeping a couple of ideas: an Esterházy torta that’s not a traditional round torta but more like a schnitte (or szelet in Hungarian), i.e., a rectangular slice; and the notion that the iconic fondant-chocolate pattern should be present but really isn’t all that exciting – it’s just sugar with a pattern drawn on it! Instead of the walnut ice cream, I’ve tried to come up with interesting pairings: white chocolate and sour cherry. Wait, what? White chocolate, that junk that’s not even real chocolate? Has he lost his mind?! I know, I know, I’m more of a 70+% dark chocolate kind of person myself. And yet, I tried both white and dark chocolate ice creams, and I must admit white chocolate works better here. Not only that, but in ice cream, the highest-quality white chocolate, the kind with 35% cocoa butter, doesn’t taste as good as the (still high-quality) 28% kind, such as Callebaut’s. It kind of makes sense, since white chocolate’s flavor mostly comes from the powdered milk it contains, magnified by a generous amount of sugar. A drizzle of dark chocolate sauce on top of the ice cream (recipe adapted from Ice Creams, Sorbets & Gelati) both reinforces the actual chocolate flavor and ticks the box regarding the signature decorative pattern.

As for the cake, I’m mixing both almonds and walnuts into the batter. The buttercream, flavored with cognac, vanilla, and almond extract all at once, is spread in thick layers that are kept light and airy by mixing the butter with a chiboust cream (a pastry cream mixed with a meringue). There are surprisingly few Esterházy torta recipes available in English, and those tend to be either unimpressive or bizarre. I would argue that mine is not only delicious, but strikes the perfect balance between tradition and innovation – and I’m totally objective.