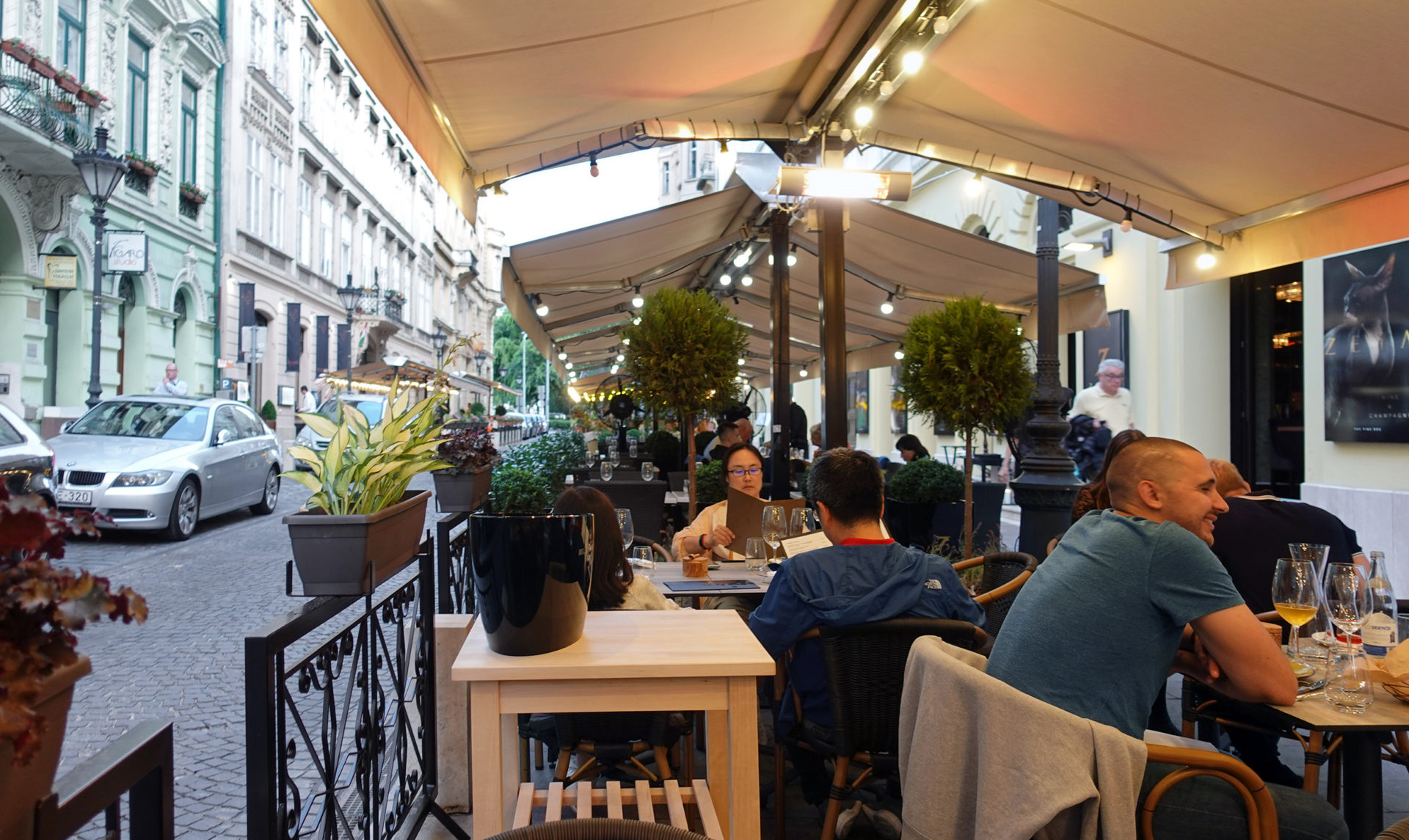 Few restaurants in Budapest have a Michelin star. One of them is Borkonyha (“Wine Kitchen” in Hungarian). The famous red guide awarded it the coveted macaron for the first time in 2014, and makes the following comment: “Skillfully executed, eye-catching dishes have subtle Hungarian influences; the kitchen keeps things simple by sourcing top-class ingredients and allowing them to shine.”

One of Borkonyha’s owners used to work at Bock Bizstró (which I recently reviewed here), and the large selection of wines and the elegant but not too formal atmosphere that he found there were an inspiration. The helm of the kitchen was given to Ákos Sárközi, an alum from Alabárdos restaurant, a 50-year old institution housed in 15th-century buildings opposite the Buda castle that features classic dishes with a modern edge. (Looking through my personal archives, I saw that I ate there in 2004, during my first trip to Budapest!) After a stint at two-Michelin-star Vila Joya in Portugal, Sárközi decided that he wanted to “show the varied faces of Hungarian cooking using modern techniques.”

These stories about Borkonyha are nice and all, but this post is supposed to be about Textúra restaurant, not Borkonyha. Well, the two are tightly connected! They’re next door to one another, and they share the same owners and head chef. In their words: “We dreamt of a restaurant that would bring back the intimacy and informality that used to describe the Michelin-star Borkonyha and its team at the very beginning. Textúra is the place where playfulness, experiments, and new discoveries can be part of the everyday life.”

If you ask me, Textúra is only slightly less high-end than its older sibling (where I must admit I haven’t been). Maybe service is more laid back, but the model isn’t quite what we see in New York where every other top chef opens a café next to their very expensive restaurant. Textúra isn’t a place where you’re gonna eat a burger – it still offers tasting menus with wine pairings! The emphasis on wine and local products with influences from international cuisines that originally inspired Borkonyha is still there.

So in the spirit of Ákos Sárközi’s everyday experimentation (and because I hardly ever get the option of doing this in a restaurant of Central/Eastern European cuisine), I’m being adventurous and selecting the chef’s mystery tasting menu! With wine pairings, of course, and my special instructions to serve only Hungarian wines.

First comes a filet of salmon trout with crispy skin, baby zucchini, squash cream, and trout roe. The dish, well-prepared and with the kind of tight flavor profile that I like, is true to the restaurant’s name, offering a nice variety of texture. It’s paired with a dry 2017 Tokaji Furmint “Betsek” from Balassa that goes very well.

Next to arrive is a fish soup, made with paprika and a very concentrated fish broth. In the middle swims a small ravioli filled with smoked fish that contrasts with the slight spiciness of the soup. I would have put two or three ravioli, but otherwise it’s a very successful dish. I am told that the 2017 Szekszárd Kadarka from Heimann pairs very well with paprika, and it’s true. This light red wine, slightly perlant, boasts a nose of Morello cherry, also present on the palate. An audacious and superb pairing!

The veal cheeks and sweetbreads that follow could be good, but are unfortunately far too cooked. They’re served with a carrot purée, half a roasted carrot, and some kind of mustard pearls – pretty classic but with an eye for textures again. The wine, a 2017 Kékfrankos from Mátra in northern Hungary (I forgot the name of the producer), is fruity but also quite tannic, probably because it’s pretty young.

The Argentinian sirloin with polenta, pickled onion, and mushrooms tastes great even if it’s a fairly predictable combination. The polenta is quite creamy and I think it contains some cheese. There’s a beautiful assortment of mushrooms: chanterelles, porcini, shitake, and beech mushrooms, if I’m not mistaken. The sommelier chose a glass of 2012 Páva by Konyári from the south of Lake Balaton. This wine is a blend of Cabernet Sauvignon and Cabernet Franc. Not bad, but the nose is pretty light. Páva means “peacock” in Hungarian – for a peacock served with a steak, I was expecting better.

For dessert, Textúra revisits the Esterházy torta, a layered cake that alternates almond meringue and flavored buttercream, topped with a fondant glaze and decorated with a characteristic chocolate striped pattern. Here, the layers are fewer and thicker, and the cake is cut into a slice laid down on the plate. It’s topped with whipped cream and cocoa powder made to resemble a walnut half – or is it a brain? The fondant is relegated to a little decorative square on the side, next to two scoops of walnut (definitely not brain) ice cream. Textúra is back to what it does best: skillfully executed variations of textures. I should remember this recipe when I eventually start working on my own Esterházy torta! The dish is paired with a 2011 Furmint Late Harvest from Királyudvar. The wine certainly isn’t bad but it’s not as great as some other wines I’ve tried from Királyudvar in the past. I’m also not crazy about drinking dessert wines with dessert; I would have preferred a dry sparkler.

What would a tasting menu be without petit fours? I receive a passion fruit marshmallow with coconut on top, and a miniature cake with a nut sponge, gianduja, and sesame seeds. Both are excellent. This gives me an excuse to order a glass of raspberry reserve palinka from Cruxx, which smells like raspberry from 10 miles away as the waiter brings it.

Despite some execution problems here and there, I wholeheartedly recommend Textúra for its modern preparation of mostly local ingredients with contrasting textures. Maybe some dishes are only moderately creative, but they’re all well thought through. I’m also pleased with the wines and the fantastic selection by the glass.