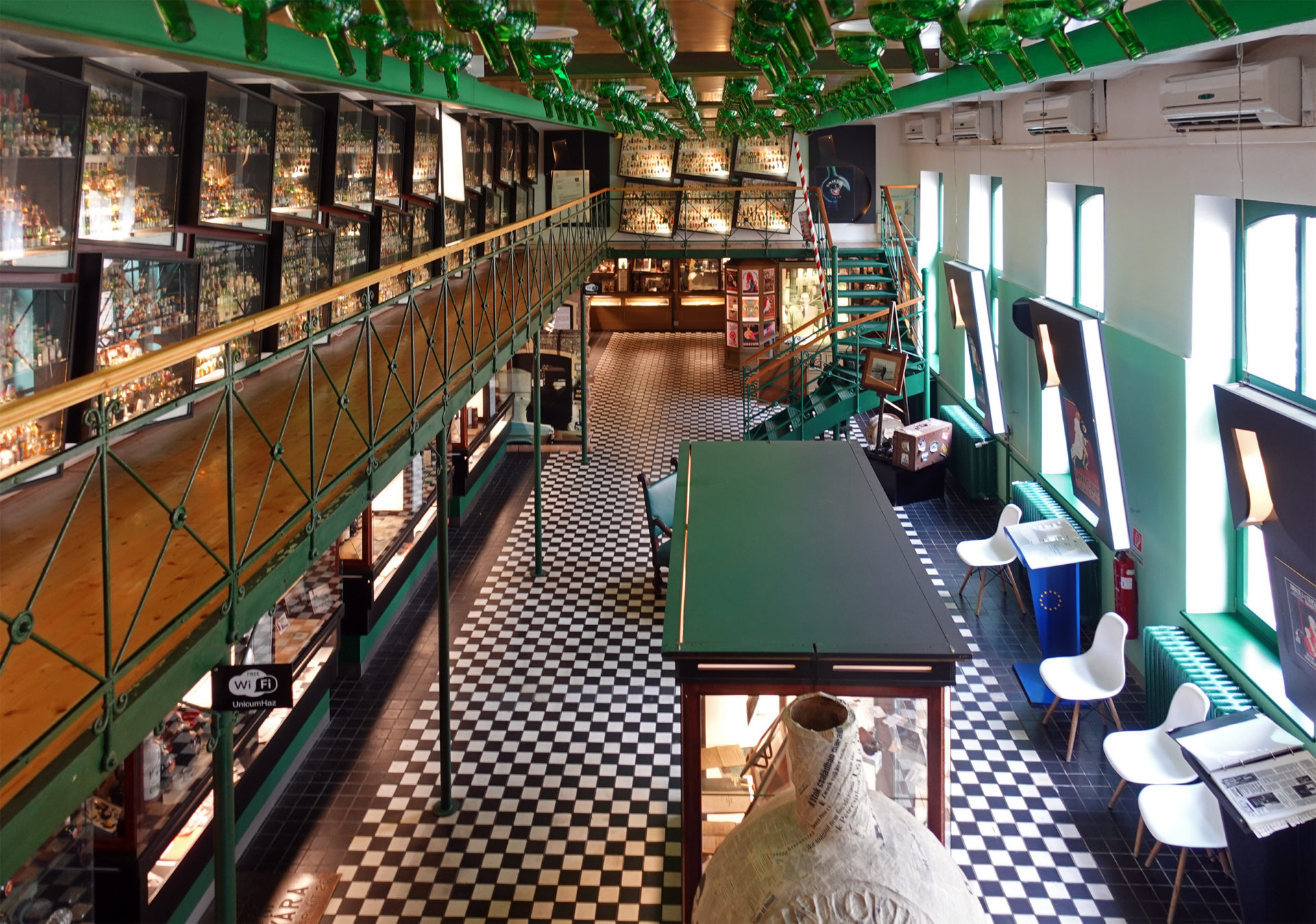 Hungaricum or Hungarikum: (Noun) A thing or phenomenon that is unique to Hungary and therefore representing great value for the Hungarians. From combination of the words Hungary or Hungaria and “unikum” meaning “unique” in Hungarian.

Hungaricums are a serious matter. They’re selected by a committee composed of various members of the government, and require a two-step application process. There are currently 76 Hungaricums, including cultural traditions, locations, foods, and beverages. And in a sense, the Unicum liqueur, by virtue of its long Hungarian history and its very name, epitomizes the concept of Hungaricum.

It all begins in 1790, when Dr. Zwack, Royal Physician to the Habsburg Court, offers Emperor Joseph II an herbal liqueur to cure his stomach problems. After drinking the concoction, the sovereign exclaims, “Dr. Zwack, das ist ein Unikum!” (The novelty is quite relative: Jan Becher is still seventeen years away from inventing his eponymous liqueur in nearby Bohemia, but pharmacists have been making sweet preparations of herbs and spices with alleged digestive properties since the Middle Ages.)

Did this really happen? Despite the imperial accolade, Dr. Zwack, who doesn’t even seem to have a first name, doesn’t become famous, doesn’t start selling his invention, and doesn’t do anything else that anyone deems worth recording – just try to find any other information about him. Not to mention that Joseph II dies in poor health in Vienna in February 1790, the very year of Zwack’s alleged cure. So much for the unique remedy…

It’s half a century later when one József Zwack, a descendant of unspecified relation to the good doctor, creates J. Zwack & Co. Born into a Jewish family in southern Bohemia in 1821, this younger Zwack is already working in the alcoholic beverage industry and sees an opportunity to start a business in Hungary. In 1840, he founds a shop and a factory in the center of Pest, on today’s Erzsébet Square. Several other liqueur and spirit companies open their doors around that time – hence the need for a marketing boost in the form of a 50-year antedate (such an inconspicuous number!) and a verbal seal of approval from a dead enlightened ruler, maybe?

Marketing ploy or not, business is going well and these are defining years for the company. With help from József’s brothers too, it gains recognition at domestic and foreign industrial fairs, including the 1873 World’s Fair in Vienna. In 1883, Zwack registers his stomach-strengthening herbal liqueur marketed under the name Unicum, sold in a round bottle with a red cross on its label, which remains Unicum’s distinctive mark to this day (only the color scheme is modified, at the request of Red Cross society). In 1892, the company has outgrown its original factory and moves to Soroksári Street, where Unicum is still produced. In 1895, it receives the title of Purveyor to the Imperial and Royal Court.

The year 1909 sees the birth of another Unicum symbol: the “Wet Man.” On a poster (later to become a cult object) made by Viktor Pachl, a bearded dude emerges from the water next to a floating bottle of Unicum, with the caption “the best stomach-strengthening liqueur.” Though if that bottle was really full, it wouldn’t be floating. Just sayin’.

Besides Unicum, the Zwack distillery goes on to produce many other spirits (up to 200, according to some sources), some of which are exported not only throughout the Austro-Hungarian Empire, but also to France, Russia, and the United States. The best-known include cumin, cocoa, and maraschino liqueurs, a pepper liqueur called Gyöngyvér, and fruit brandies of plum and peach. Still, the company’s main product remains Unicum, and its success spawns many counterfeits.

József Zwack dies in 1915, but his son Lajos is already an integral part of the business. In fact, by 1926, Lajos’s own sons join the company’s management, Béla overseeing production and product development and János directing marketing and export. Because of the contraction of the market caused by global crisis and the Prohibition era in the USA in the 1920s and 1930s, the factory decides to diversify, and it leverages its experience with glass manufacture to produce light bulbs and fluorescent tubes as additional sources of revenue.

Then comes World War II, and Budapest is one of the most heavily bombed cities in Europe. The Zwack factory is almost completely destroyed. In 1945, the family resumes work in two rooms among the ruins, and proceeds to rebuilding. But by the time the premises are fully restored to their pre-war condition, in the fall of 1948, they’ve been nationalized by the communists, .

Béla Zwack and his wife stay on as employees of the nationalized company for a few years, but give the communist-appointed representatives a fudged Unicum recipe. János Zwack flees to America via Vienna, and takes the original recipe with him. His son Péter escapes to Italy via Yugoslavia, mostly on foot. In the late 1950s, the company starts producing genuine Unicum in Italy, and files a lawsuit in the US against the Hungarian state, where the latter continues to export its own version from Budapest. Eventually, the socialist state-owned company is banned from using the name Zwack and from exporting Unicum to the West.

Meanwhile, Péter has moved to America. He signs a contract with Jim Beam to produce and market gin, vodka, and plum brandy under the name Zwack. He lives in Chicago, then New York. But in 1970, he goes back to Europe to oversee the family business in Italy. His father and uncle died in 1958 and the company has been run by his mother and aunt since then. He takes the reins of the production and marketing of Unicum for the next two decades.

It’s 1988. János Kádár, General Secretary of the Hungarian Socialist Workers’ Party since 1956, is forced to resign after the “apparat coup,” in the face of mounting economic difficulties and his own ill health (he dies the following year). The business environment changes significantly as the Hungarian Parliament passes the 1988 Foreign Investment Law. This opens the way for full foreign ownership of Hungarian companies, and the country plans to open a stock exchange at the beginning of 1989. Péter Zwack seizes the opportunity to return to his homeland and, together with his partner, German liqueur manufacturer Emil Underberg, establishes Péter Zwack & Consorten AG, a joint venture with the still state-owned Budapest Liquor Company. After the collapse of the communist regime, the new company repurchases the entire Budapest Liquor Company as part of the privatization program, and establishes Zwack Unicum in 1992.

In 2008, after almost 20 years, Péter Zwack hands over the management of the company to his children. His daughter Izabella becomes a member of the board, and his son Sándor becomes chairman. If we omit the phantom doctor, they’re the fifth generation of Zwacks to run the company. Péter dies in 2012.

In the 21st century, being “the best stomach-strengthening liqueur” is no longer a motto fit to attract customers. Sándor and Izabella modernize the image of the venerable digestive and launch several new Unicum liqueurs: Unicum Next (a lighter version), Unicum Szilva (macerated with plums), Unicum Riserva (mixed with Tokaji wine and aged longer), and, in 2020, Unicum Barista (mixed with Arabica coffee).

Today, the distillery grounds, while still producing the various Unicum flavors, also host a museum. In addition to learning about the company’s history and the fabrication of the liqueur, visitors can see the renovated original stills and the cellar where Unicum ages in large oak barrels. This is where we’ll go in my next post!