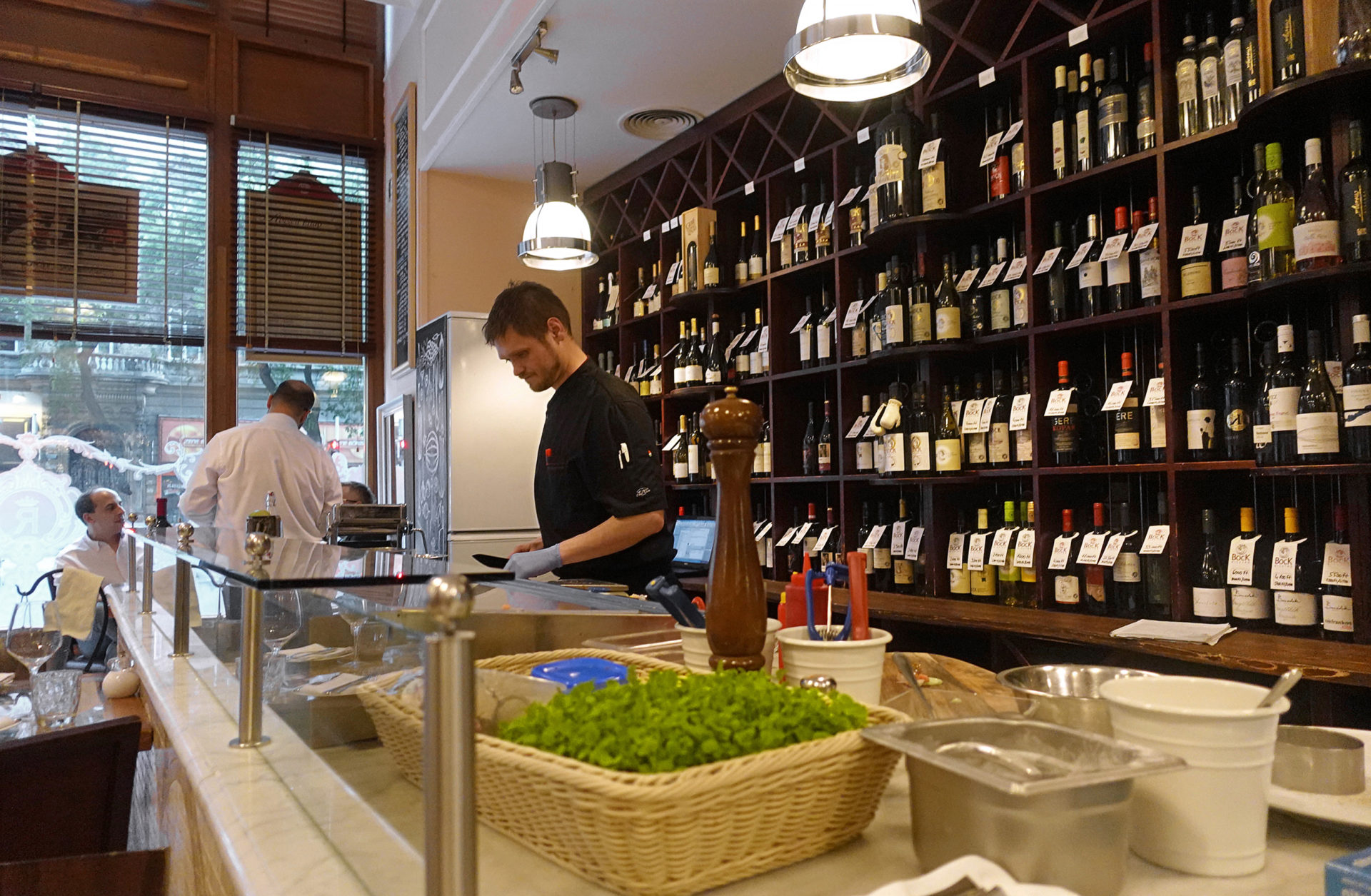 Although I’ve been to Hungary many times, I haven’t written much about my visits, most of which predate the creation of this blog. So far, I’ve really only shared my impressions of Sopron (here and here), several Tokaji wine reviews, and the occasional Hungarian recipe. But in the summer of 2019, I had the chance to spend a few days in Budapest for work, and it’s about time I report on the discoveries I made in my free hours. Starting with Bock Bisztró.

Located inside the posh Corinthia Hotel, Bock Bisztró has been at the forefront of the Hungarian dining scene since its opening, thanks to the direction of its famous head chef, Bíró Lajos. After starting his career in the hospitality industry in the early 1970s, Lajos becomes a chef at the American Embassy in 1975. Somehow, this tenure gets him acquainted with Chinese cuisine, so much so that in 1982, he leaves to work at the Red Dragon Restaurant. He returns to Hungarian cuisine in 1989, as head chef and new co-owner of the Museum Café (Múzeum Kávéház), a venerable institution operating next to the National Museum since 1885. In 2004, Lajos is approached by the future owners of Bock Bisztró, who already have the idea of opening a wine-themed bistro, at a time when bistros aren’t really part of Budapest’s gastronomical landscape. Perhaps tired of the stuffy atmosphere and of his long residency at the Museum Café, Lajos is quick to accept. Finally, the team decides to secure thier eatery’s image as a wine destination by partnering with one of the most popular and respected Hungarian winemakers, József Bock. Bock Bisztró is born.

From day one, the restaurant receives many accolades: it’s consistently named the best or one of the best Hungarian restaurants by various sources; it’s awarded a Bib Gourmand by the Michelin Guide in 2009; it occupies the 104th rank on Opinionated About Dining’s 2020 Europe Heritage list. On the beverage front, not only does it offer the full assortment of wines made by József Bock (and he makes a lot of them), it also boasts many other wines from all over the country, totaling over 200 labels – and not just big names.

The menu at Bock Bisztró includes a lot of Hungarian classics: foie gras, goulash soup, fish soup, stuffed pepper, Hortobágyi palacsinta, lecsó, chicken paprikás, pike-perch fillet, strudel, Somlói galuska… But many of them have been re-interpreted: the foie gras is a sushi, the menu explicitly says the paprikás comes “with a twist,” the pike-perch is served with blood sausage dumplings, the strudel and the Somloi arrive in a glass. And that’s not to say that other dishes haven’t also been paid special attention.

Starting on a high note, the Hortobágyi palacsinta – a crêpe filled with minced meat and served in a red pepper and sour cream sauce – might be the best I’ve ever had! The slightly browned crêpe is larger than what I’ve seen elsewhere, thus forming a thick roll with many layers of tender meat (veal, probably). The garnishes on top consist of diced raw red pepper, a slice of what looks like raw Hungarian wax pepper (similar to a banana pepper, but hotter), microgreens, and white pearls probably made of sour cream. The thick red pepper sauce is finished with drizzles of red and green pepper oils.

The sausage lecsó, a vegetable stew with spicy sausage served in a pan, doesn’t disappoint either. There are sliced onions, quartered tomatoes, and peppers cut into large dice (yellow-green peppers often sold as “lecsó peppers”). The sausage, sliced and fried, is a bit like Spanish chorizo but ground more finely, and in addition to a generous amount of paprika, it contains some caraway and garlic – it looks like a Csabai sausage to me. The pan is topped with the same Hungarian wax pepper as the palacsinta, plus a few parsley leaves.

The lamb chops Gundel-style with spinach are interesting because lamb is relatively rare in Hungarian cuisine. I don’t know what the Gundel-style is in this case, as I haven’t found any similar recipe in my Károly Gundel cookbooks. The chops are breaded and fried, then topped with a few slices of prosciutto, a slice of Chioggia beet, and microgreens. The spinach “sauce” is more like a kind of creamed spinach than an actual sauce. Overall it’s a pretty heavy dish, and if that’s not enough, it comes with a potato purée on the side. Although the execution has some issues, I think the dish could be turned into something great: keep the two chops attached so you can fry them in one piece and cut them after, skip the prosciutto, add another vegetable…

The beef tenderloin Budapest-style is a thick piece of filet mignon topped with a slice of fried foie gras – hence the Budapest-style, I assume. The meat is very well cooked and tastes great, and you can’t go wrong with foie gras. The vegetables, on the other hand, are a mixed bag. The fried potato slices and the green pea purée (a colorful and unexpected accompaniment!) go well with the meat. But then there’s a weird construction with various vegetables inside (peas, peppers, onions) and a mushroom cap on top that seems to have come straight from some misguided 1980s cookbook. With a bit more focus – why not try some cooked apples or braised endives instead of that mushroom flying saucer? – this could be a great dish too.

For dessert, the Somlói galuska is a modern interpretation of a classic dessert that I’ve covered here. Bock Bistro’s interpretation is very different from mine, though it too preserves all the components of the original. It’s served in a verrine with several layers arranged as follows from bottom to top: vanilla sponge, chocolate sponge, chocolate cream, vanilla cream, chocolate sauce, crumbs, whipped cream, mint leaves. The result tastes excellent, the cream layers reminding me a bit of French pots de crème.

The menu also features what it calls a “bizarre ice cream selection (sausage, pork fat, tobacco)” that I haven’t had a chance to try. Next time, maybe…

Since Bock Bistro emphasizes Hungarian wines, it’s worth mentioning some of the stuff I tried (none of it made by Bock, who mercilessly sells his own products here for at three times the already hefty retail price). The “Pelzberg” Kékfrankos 2016 by Grál Borpince is light but pleasant, with red berries dominating on the palate. I’m not crazy about Kékfrankos in general, but it goes well with the lécso. The “Hangacs” Egri Bikaver Grand Superior 2016 by St. Andrea is one of the best Egri Bikavers I’ve encountered. Though still a bit tannic, it offers a nose of leather, forest floor, and dark berries. Finally, the Mádzoo 2018 from Szarka Pince is a sparkling Tokaji wine made with Furmint and Hárslevelű. It’s supposedly the first year that this young winemaker makes sparklers, and the result is refreshing and light. Thanks to its dry finish, it pairs nicely with the Somlói galuska.