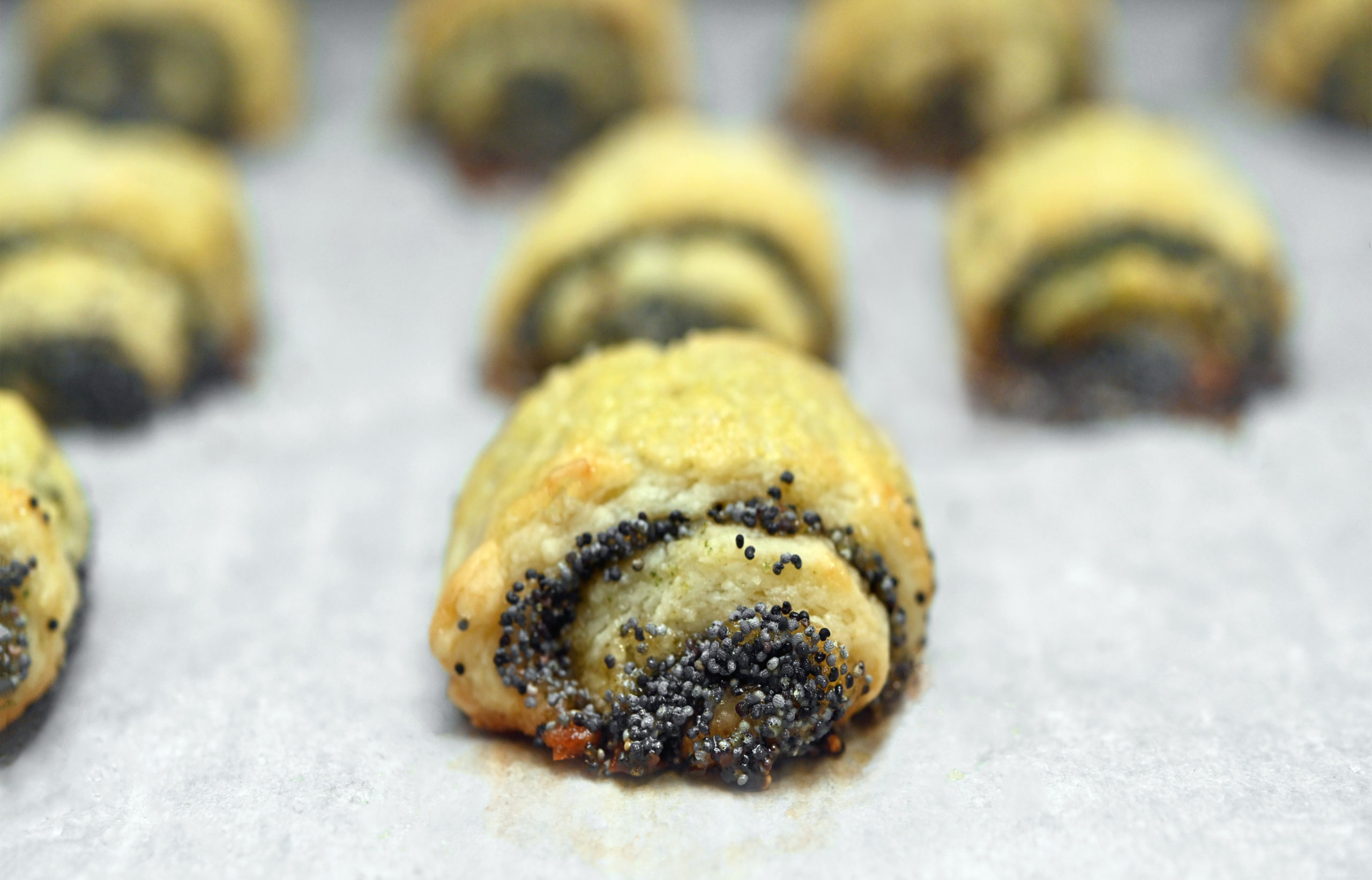 If you live in New York, even if you’re not Jewish, you’re probably familiar with these little deformed cookies haphazardly stacked in plastic boxes and sold in an assortment of mystery flavors – the rugelach. To the neophyte, they don’t inspire much confidence, but did you know that these dry and heavy lumps of dough are the degenerate cousins of the French croissant?

It all begins in Central Europe, with the Austrian kipfel, (sometimes spelled kipferl), a traditional monastery pastry baked for Easter. The word kipfel originates from a term in Old High German that refers to the horn-shaped stanchions of a cart. While there are known mentions dating from the 11th and 13th centuries, they don’t come with descriptions or recipes. Only a few centuries later is kipfel described as a crescent-shaped roll made of yeast dough, popular for coffee breaks and breakfasts, particularly in Austria. Neighboring countries soon come up with their own versions, which they name after the original or after rog, the Slavic word for horn: kifli in Hungary; kifla in Bulgaria, Croatia, and Serbia; rohlík in Czech Republic; rogalik in Poland, Ukraine, and Russia. (And yes, they reach Paris in the mid-19th century, where they become known as croissants and evolve into a laminated dough pastry a few decades later.) Some versions contain fillings made of ground walnuts, poppy seeds, dried fruits, or preserves, and to this day almost every country in Central or Eastern Europe boasts its own version of a crescent-shaped yeast dough pastry with a sweet filling.

With the Eastern European Jewish emigration in the late 19th century and early 20th century, the kipfel comes to America, the land of quantity over quality. Nobody has time for a yeast dough, everything has to be prepared quickly, and everyone’s willing to pretend that the result tastes exactly the same. By the 1940s, according to Gil Marks’ Encyclopedia of Jewish Food, sour cream and cottage cheese recipes abound. Among Jews, Polish rogaliki become known as rugelach, a Yiddish word that shares the same Slavic root of rog. In 1950, Mildred O. Knopf’s The Perfect Hostess Cook Book features the first known record of cream cheese crescents (the book also includes a recipe for yeastless Vienna kipfel). This will become the canonical preparation method for rugelach, now more akin to a cookie than a pastry.

But that’s still too time-consuming for America, so many replace the traditional crescent with a plain rectangular shape, which also allows for a greater concentration of filling. The metamorphosis into a heavy little deformed cookie is complete, and you’d have to be both blind and anosmic not to notice the difference with the original.

Meanwhile, in Israel, European émigrés think it’s still worth using yeast dough, and their rugelach (same Yiddish name, different product) soon becomes available in all the bakeries and grocery stores. In fact, some fancy bakers even start using a laminated yeast dough (just like in French croissants), making the preparation even more time-consuming. As for the fillings, classic options include chocolate, poppy seed, cinnamon, or halva. In NYC, you can find this kind of rugelach at Breads Bakery, founded by Israeli baker Uri Scheft.

I don’t plan to cover every single variation on kipferl and rugelach. (Maybe I’ll write more posts in the future!) No laminated dough today, though I have nothing against it. Instead, I’m focusing on the Polish rogalik and the New York rugelach. Because, yes, that mutant shapeless cookie can be delicious. As you’ll see, I’m covering both versions pretty extensively. I’ve made countless batches to determine the best proportions and pairings, and I’m presenting the dough and filling recipes separately so you can mix and match.

It boggles the mind to see how many terrible dough recipes circulate in cookbooks and blogs for something as simple as a rugelach. I started my experiments with the recipe from George Greenstein’s The Jewish Baker’s Pastry Secrets. Surely, an award-winning Jewish baker would have a fabulous rugelach recipe, right? Nope. Greenstein’s needlessly complicated ingredient list, which calls for two types of flour, baking powder, cream cheese, butter, egg, sugar, salt, and vanilla extract, produces a dough that’s very hard to roll and sags tremendously when baked, for no benefit. Meanwhile, the good old New York Times has it all figured out and uses a mere four ingredients, with vastly superior results (note that recipe is written by Dorie Greenspan; not everybody can compare to Dorie Greenspan). For Polish rogalik, I started with a recipe in the critically acclaimed Polska: New Polish Cooking. I don’t know what all those critics acclaim but it’s probably not the recipe on page 40: the author has no clue how to make a yeast dough (my favorite phrase is “put this ball of dough into a large pan or container filled with warm water”; well, the book cover did promise “a revolutionary style of cooking”!), the baking time is off by 25 minutes, and the result is thoroughly mediocre. And don’t get me started about the clowns who recommend that you order entire sacks of some random Canadian flour – for my rants about flour, just read my recipe posts here and here. At least George the Jewish Baker may have an excuse for his questionable recipe: he died before finishing it; his family published the book.

As for the fillings, I didn’t want to stick to the classics, so I came up with several interesting pairings of my own, often combining traditional flavors with new ones. Every pairing consists of a combination of three elements (which, for lack of better terms, I refer to as spread, crumbled solids, and flavored sugar), each centered around one ingredient. Then recipe templates for rogalik and rugelach explain how to use the combinations. If the pastries still don’t look as nice as some of Instagram’s masterpieces, that’s because I’m cramming them with as much filling as I can. You can make them prettier with less filling, but if you ask me, they won’t taste as good.

One last note for the linguists: in their languages of origin, rugelach is plural, whereas rogalik is singular (the Polish plural would be rogaliki).

Looking at the sections below, you’ll want to A) choose between rogalik and rugelach; B) choose a pairing. Armed with these templates, feel free to create your own pairings too!