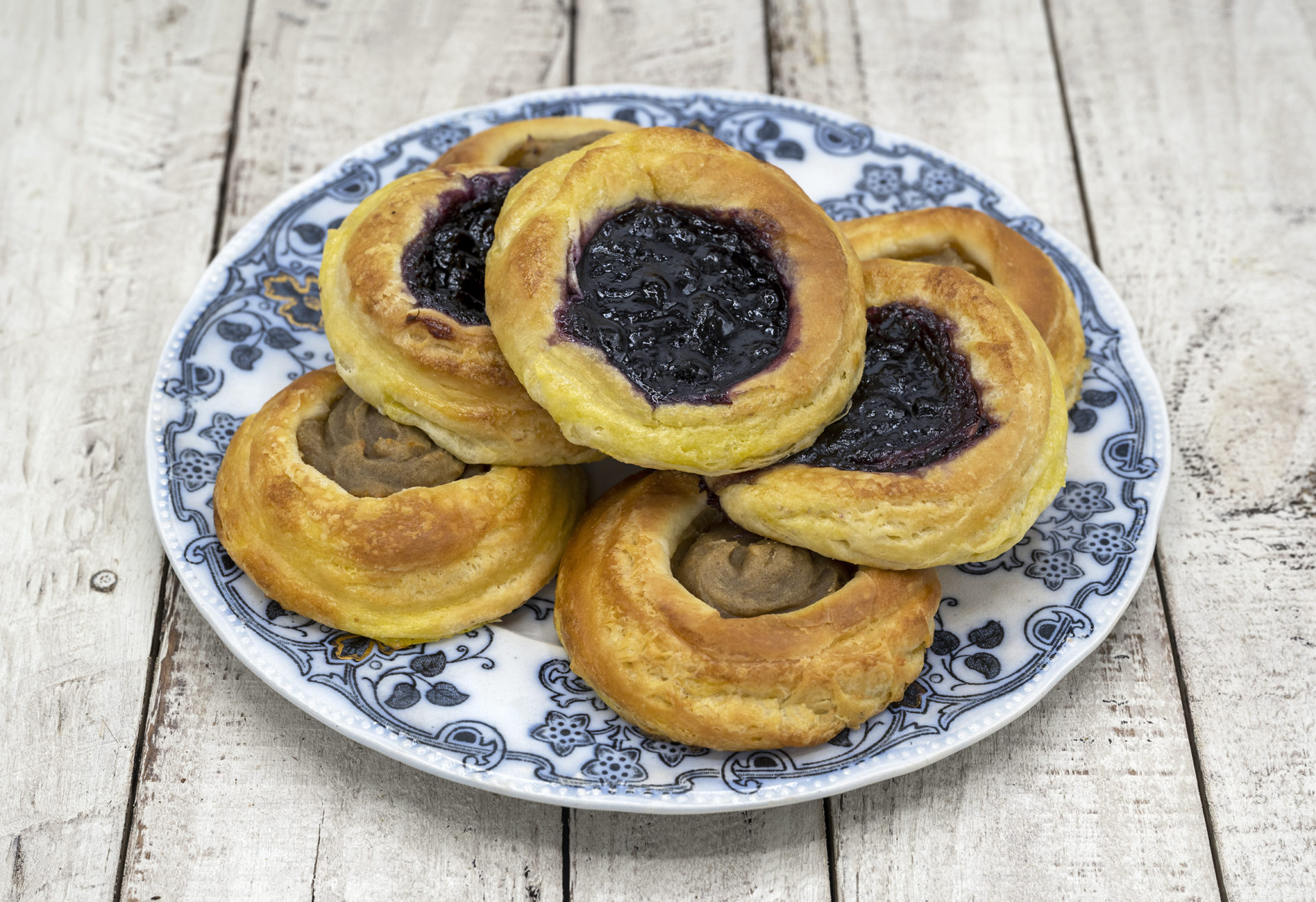 If you’ve been to Texas (or, nowadays, even Brooklyn), you might have noticed stores selling pastries under the strange name of kolache. Maybe you thought this was a Latino thing, like toloache, the Mesoamerican plant used as a hallucinogen, medicine, and aphrodisiac. In fact, this staple of Central Texan gastronomy actually hails from Czech Republic, where a koláček (the diminutive form of koláč, pronounced kolach; plural koláčky) is a round yeast pastry with a sweet filling in the center!

The exact origin of the koláček is hard to trace. The word koláč comes from kolo (which means “wheel” or “round” in Czech and other Slavic languages), and like many other round baked products around the world, it’s supposed to symbolize the sun. Throughout Eastern Europe, with the introduction, around the 15th century, of yeast breads enriched with butter, eggs, and sugar, it started to designate a round, sweetened yeast bread consumed on special occasions. Czechia, Slovakia, Poland, Hungary, and Croatia all made their own versions of kolache, with various spellings (and the Russian kulich can be seen as its Orthodox cousin). Bohemians and Moravians paired the pastry with povidla, a kind of plum butter. In the 18th century, bakers began making it with the filling already added in a small dip in the center of the dough. Over time, new toppings and fillings emerged: poppy seeds, farmer cheese…

How did the koláček make its way to the Lone Star State, you may ask? In the beginning (aka just before the middle of the 19th century) came the Germans. Some were drawn to Texas by the promise of new economic and social opportunities. Others were political refugees fleeing the revolutions that rattled Europe in 1848. As Czechia was then part of the Austro-Hungarian Empire, it’s no surprise that Czech immigrants followed suit during the mid-to-late nineteenth century, for many of the same reasons. They settled in rural areas, largely as farmers and craftsmen, and brought with them their native cuisine and its roasted meats with noodles and dumplings, its sausages with potatoes and sauerkraut, and its baked goods such as fruit strudels. All told, their cooking didn’t differ that much from the Germans’ (whose meats, by the way, are the ancestors of barbecue), except for a few dishes like koláček. In Europe, the ingredients that koláček called for (sugar, eggs, butter, white flour) were very expensive for the regular Josef, so the treats were reserved for special occasions like Epiphany, Shrove Tuesday, or weddings. In America, they became a more common comfort food for the Czech diaspora.

Today, in Czech Republic, koláčky are consumed year-round even outside of holidays, and in Texas, the kolache has outgrown its status as edible symbol of American Czech culture to become one of the most popular pastries in the state. There are kolache festivals and baking contests all over Central Texas, such as the annual Westfest for Labor Day. Although yeast pastries imported from Europe have routinely been bastardized by Americans who were too much in a hurry to wait for dough to rise, Texan recipes tend to remain true to the Czech original, such as this one. Only the toppings have acquired some local color and variety: some kolaches are still filled with the traditional prune, fruit, or cheese mixtures, while others feature savory flavors like spinach-artichoke or jalapeño-sausage-cheddar. You can learn more about American kolaches here and here.

My koláčky are adapted from traditional Czech recipes but use a wetter dough for an airier result – picking one up, you’re actually surprised by how light they are in your hand. I also like to have a generous amount of filling rather than a tiny bit in the center, so I’ve slightly modified their shape to include a wider dip. Finally, while some recipes sprinkle streusel, slivered almonds, or powdered sugar on top of the pastries, I find it rather unnecessary. Koláčky are already plenty sweet and I think my toppings are so good that they don’t need anything else!

Some of these toppings follow tradition, but with a twist: blueberry preserves (using my own recipe), poppy seeds with a touch of cocoa, farmer cheese with dulce de leche (yes, dulce de leche is Czech too: it’s just called caramelized condensed milk). Some are more my own creations using traditional Czech flavors: homemade chestnut cream (I love chestnut cream), or, most distinctively, my fantastic Becherovka custard. I consider the latter my claim to fame in what already aims to be the definitive blog post about koláčky. This liberally spiked modified pastry cream truly tastes like the infamous liqueur from Karlovy Vary! (You could consider reducing the amount of Becherovka a little, depending on your fondness for herbal spirits.)

But there’s more! In addition to the regular yeast dough, I make a laminated yeast dough. This turns the pastries into something a bit closer to Danishes, widely popular Danish pastries of Austrian origin that also use a laminated yeast dough with filling in the middle. Authentic? No. Delicious? Yes! These laminated koláčky with Becherovka custard might very well be used as medicines and aphrodisiacs after all!

One last word… Koláčky are best consumed a few minutes after they come out of the oven, or at least on the same day they were made. If you have to keep them longer, store them at room temperature, wrapped in foil, and pop them in the oven for a couple minutes before eating.

Yields 6 pastries each
Total preparation: 2 hours for the dulce de leche and cheese filling, about 1 hour 15 minutes for the others
Active preparation: 5-15 minutes, depending on the filling