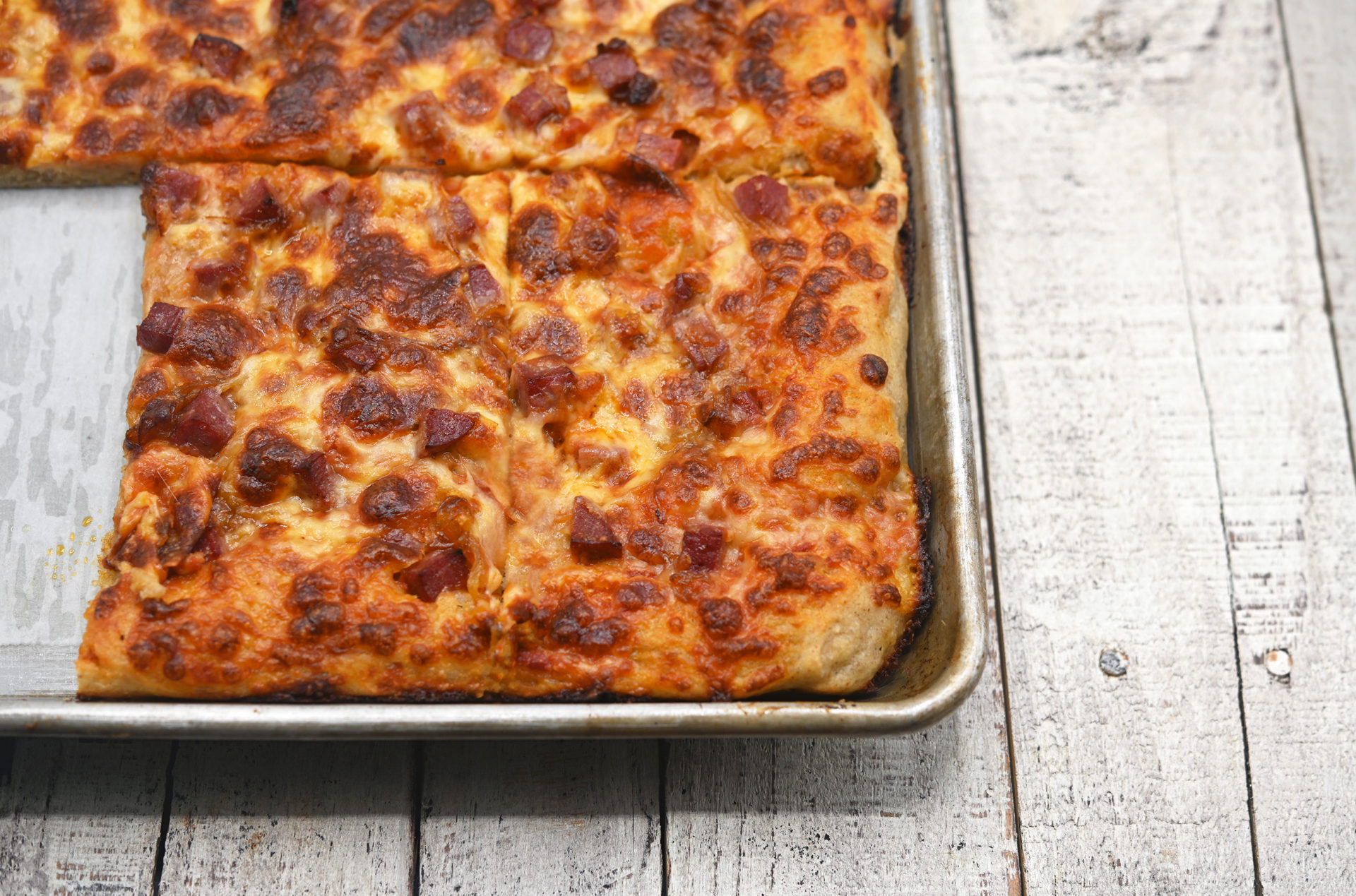 As we saw in my posts about the Murmansk restaurant scene and the food at the Bear’s Corner camp in Lovozero, the global appeal of pizza reaches even beyond the Arctic Circle, inspiring chefs in the Russian Far North to create their own variations with local ingredients. Together with soups, stews, and cutlets, pizza has become a Russian staple food. But how exactly did that happen?

It turns out that a podcast called Food Chronicles dedicated an entire episode to the subject (available here). As it’s only in Russian, I’ll capture the highlights for your here, adding a few details of my own. Though at first differing significantly from the real deal, pizza appears in the USSR slightly before perestroika, perhaps as a gastronomical token of the longstanding friendship between the Soviets and Italy, a country where the Communist party holds an important position on the political scene. In the mid-eighties, recipes spreading by word-of-mouth instruct home cooks to spread some dough on a large tray and top it with tomato sauce, sausage, and Russian cheese, then bake it in the oven. As all the ingredients, including ready-made dough, can be purchased in stores fairly easily, pizza appeals by its simplicity of preparation. In a country known for its shortages, the variety of possible toppings is probably a plus too. Even school cafeterias start serving pizza. In 1986 (before the Law on Cooperatives), a pizzeria opens in Moscow, with toppings such as boiled egg. Then in 1988, a food truck from Astro Pizza, one of the first-ever Soviet-American joint fast food ventures, takes the streets of Moscow by storm and becomes a sensation among the capital’s hipsters despite its steep prices. The enterprise lasts only half a year, as a foreign company can’t do much with revenue in non-convertible rubles, but pizza becomes the food of perestroika.

Pizza gains further popularity in the early nineties, as people are now free to be openly interested in everything foreign. Pizza Hut opens two restaurants on Moscow’s Tverskaya and Kutuzovskaya Streets in 1990, positioning its pies (including a “Moscow pie” with salmon) as the food of freedom. Again, the sky-high prices don’t deter customers: the two kitchens are soon baking 5,000 pizzas daily, and long lines form every day, surpassed in length only by the ones at nearby McDonald’s. Western food turns into the material manifestation of the winds of change that sweep the Soviet Union. A Russian pizza chain, Doka-Pizza, also emerges in 1990.

More chains follow. In 1993, Italian pizza finally makes its entrance on the Russian market with a restaurant called Patio Pizza, owned by a Venezuelan entrepreneur of Russian descent. In 1997, two Georgian brothers start Sbarro franchises. Then comes the restaurant boom of the aughts in Russia: eating out is no longer reserved for the elite or for special occasions; the newly-formed middle class is eager to spend some of its increasing disposable income on dining. Sbarro and Patio Pizza (rebranded Il Patio) open more and more franchises, and in 2004, Papa John’s jumps on the bandwagon and pioneers pizza delivery service.

In 2011, a new Russian chain appears that will durably change the landscape: Dodo Pizza. After working for several fast-food chains (including Papa John’s), Fyodor Ovchinnikov installs a pizza oven in his building’s basement in his native Syktvyvkar – in the Komi Republic, in the Russian Far North! Describing itself as “a digital-first pizza delivery franchise,” Dodo soon opens branches all over Russia and becomes the country’s largest pizza chain.

The food embargo that follows the sanctions of 2014 is a blow to Russia’s restaurants serving European cuisines, but pizzerias manage to adapt pretty well: cheese production quickly ramps up in the Moscow region, and other necessary ingredients are already available domestically. In more recent years, the boom of food delivery service increases pizza’s popularity even further, as few foods are as easy to deliver/reheat/eat without having to do the dishes/share with family and friends/customize to everyone’s tastes and preferences/feed to a child as pizza.

Russian pizza recipes take into account local taste preferences, and “country-style” pies with a thick crust are quite popular. Sausage, being such an essential ingredient of Russian cuisine, remains a common topping just like it was in the eighties. My Russian Far North pizza follows the same model:

Perhaps more than anything else, what makes a great pizza is a great dough. Since the main ingredient of pizza dough is flour, here’s some advice about buying flour:

Finally, here’s a suggestion for your leftovers:
Cut the pizza into fingers about 1-1.5 cm wide; toss in a generous amount of good olive oil; place on a sheet tray lined with parchment paper and bake in a 230 C / 450 F oven for about 8 minutes; drain on paper towels for a couple minutes; serve as cocktail food with a Post Office or one of my Karelian balsam cocktails!

“In a country known for its shortages” that is a distortion of reality as industrialization brought the Soviet Union food and all kinds of essential product security from 1933 – Perestroika save WWII https://www.latimes.com/archives/la-xpm-1988-09-18-mn-3403-story.html even the CIA took note in 1983 that Soviet citizens ate about the same as American citizens, but Soviet citizens might have eaten healthier https://www.cia.gov/readingroom/document/cia-rdp84b00274r000300150009-5 factor in that there was guaranteed housing in the Soviet Union and the CIA was most likely not counting how much homeless Americans ate.

You seem to be mixing up famine and food shortages. You’re also conveniently skipping Holodomor and starvation in concentration camps.
That being said, I agree that in the eighties Soviet citizens were probably eating healthier than Americans since they had no junk food, very little processed food in general, and very little red meat too.

I mixed up neither because famines cause food shortages, I conveniently skipped over nothing because 1933 was the end of the last natural famine or food shortage in Kazakhstan, Russia, Ukraine, and the entire Soviet Union because of industrialization and mechanization of agriculture. There were many deadly famines across the former Russian Empire in the 1800s and early 1900s when famines happened every 10 – 13 years, being one of the poorest and most underdeveloped countries in Europe, but in the West, only the second and last natural Soviet famine of 1932 – 1933 is talked about because it has political value through distortions that are traced back to Nazi and Ukrainian Nazi collaborator lies.
Concentration camps were in Germany and the US, maybe you mixed them up with prison labor camps in the Soviet Union, which ended across the industrialized world except the US around the same time, in the Soviet Union they ended in 1960 and I already accounted for the food shortages in the prison labor camps and around the country during the WWII era, which was the Nazis’ fault for invading. Even right-wing hack Timothy Snyder admitted over 10 years ago that the vast majority of Soviet prison labor camp deaths were during WWII as the Nazi invasion deprived the camps of food.
The Soviets had plenty of junk food like plombir and eskimo ice cream and only natural ingredients were allowed to make them, Russians alone are known for always having sweets around the house, but what was offered to all people in the Soviet Union was healthier than what was and still is affordable to most people in the US.