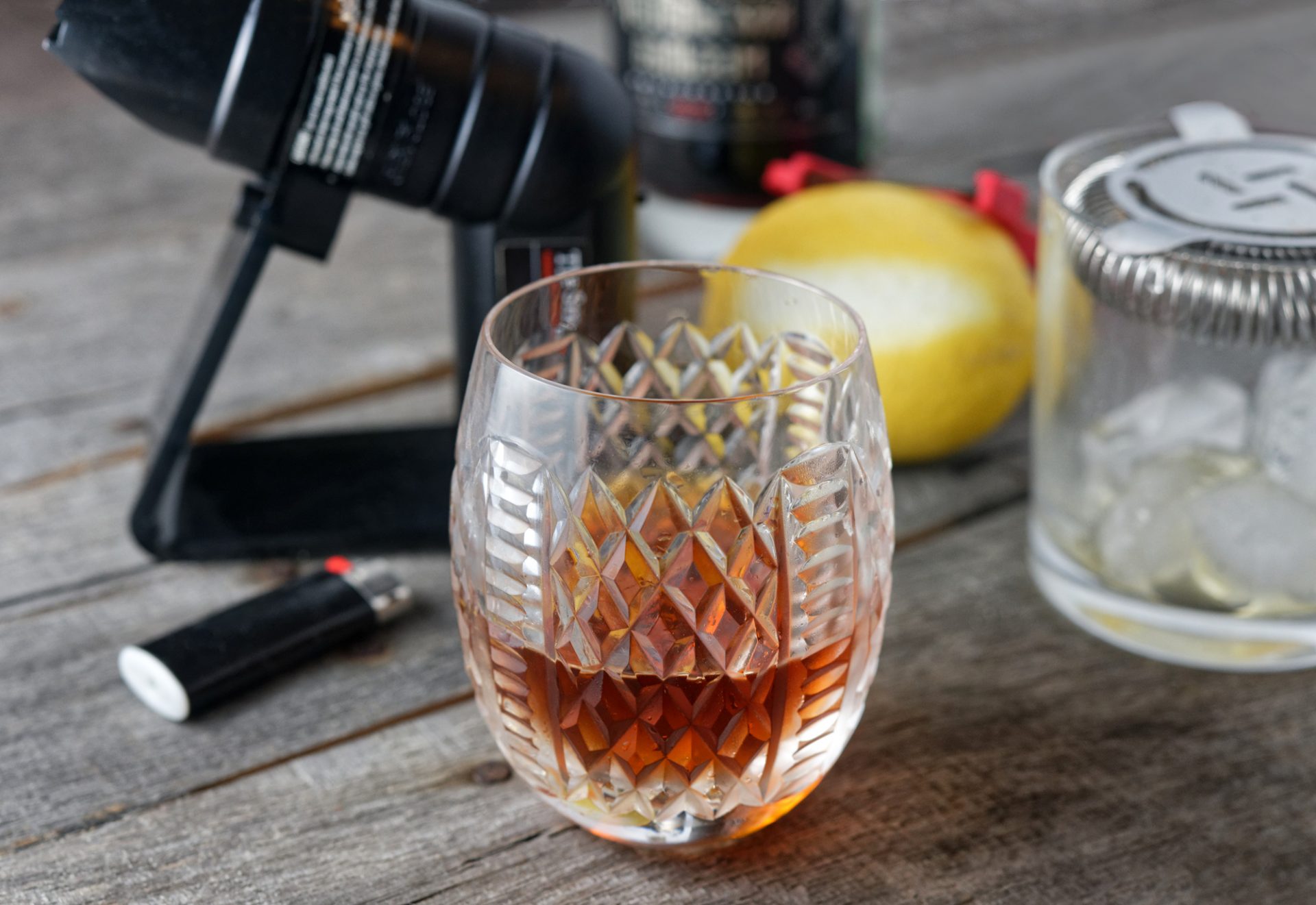 As I mentioned in my last post, if you want to fully appreciate the complexity of the plant and berry blend that is Karelian balsam, you should drink it on its own, neat and at room temperature. That’s not to say that this is what everyone does, though. For example, it’s recommended (by whom exactly, I don’t know) to add one teaspoon to your tea or coffee in the morning, “for immunization” – proof that the medicinal function of herbal liqueurs lives on in the local folklore. People with more recreational inclinations also drink balsam with cherry juice (hence, maybe, the new cherry balsam that the Petrovsky Liquor Factory is planning to launch), Sprite, or Coke. But balsam hasn’t yet entered most mixologists’ repertoire.

Yet balsam has real potential for cocktails. Sweet and bitter, with a complex flavor and a strong tinting power, it could become a bartender’s best friend and help create twists on classic concoctions, in Russia and beyond. To jump-start the movement, here are my recipes for two cocktails made with Karelian balsam, inspired by my trip to Karelia and using many characteristic flavors of the region. Until Petrovsky starts exporting its products to a liquor store near you, I even allow you to use the more widely available Riga balsam, which might require some slight adjustments in the proportions.

Unlike my usual recipes where all the proportions are expressed in grams, the recipes below use milliliters (ml) for liquids, like bartenders normally would. Well, in civilized countries where people don’t count with spoons and cups, that is.

A toddy refers to a hot water-based drink, generally spiced, sweetened, and laced with liquor. The word “toddy” comes from the Indian drink of the same name (give or take the inevitable British distortion), produced by fermenting the sap of palm trees – an etymology that sounds pretty auspicious for a balsam cocktail! Apart from the black tea, all the ingredients in this recipe actually appear in some form in the recipe of Karelian balsam itself.

This cocktail was partly conceived during a visit to the bar at the Fregat Hotel in Petrozavodsk, a recent conversion of the old Soviet ferry terminal on Lake Onega. One late evening, we approached the bartender with the firm intention of creating a grown-up balsam cocktail, perhaps inspired by a Manhattan or a Sazerac. First came the idea of using balsam to rinse the glass, just like a proper Sazerac requires an absinthe rinse. Then we decided to smoke the cocktail, as a nod to the many smoked foods found in Karelia (the restaurant of the Fregat Hotel, for example, smoked its own fish). In the absence of smoking equipment at the bar in the middle of the night (i.e., a smoker, a smoking gun, or just some liquid smoke), this proved difficult. It should be noted that the bartender enthusiastically cooperated, putting our glasses in the fireplace, burning a pineapple leaf in a metal shaker… Still, after half a dozen trials, we all agreed that there was no good reason to mess with such great drinks as the Manhattan and the Sazerac.

Back home a week later, I decided to revisit the idea. The “breakthrough” was to create a more Russian version, instead of copying an American classic. Oh, I didn’t scratch my head too long; I just replaced the rye with vodka! The rest is Sazerac-ish with a Russian twist: a balsam rinse (but I keep the balsam in the glass), a syrup (birch), some smoked vodka, and lemon zest to finish. Delicious!

The Sazerac cocktail is named after the Sazerac-de-Forge et Fils cognac that served as its original main ingredient – this was replaced with rye whiskey only later. So it kind of makes sense to call my invention the Petrovsky, after the distillery/factory that makes Karelian balsam. You would be helping history repeat itself by replacing the Karelian balsma with Riga balsam. Perhaps a Petrovsky cocktail made with genuine Karelian balsam and Petrozavodsk vodka smoked with charred pineapple leaves should be called a Fregat…