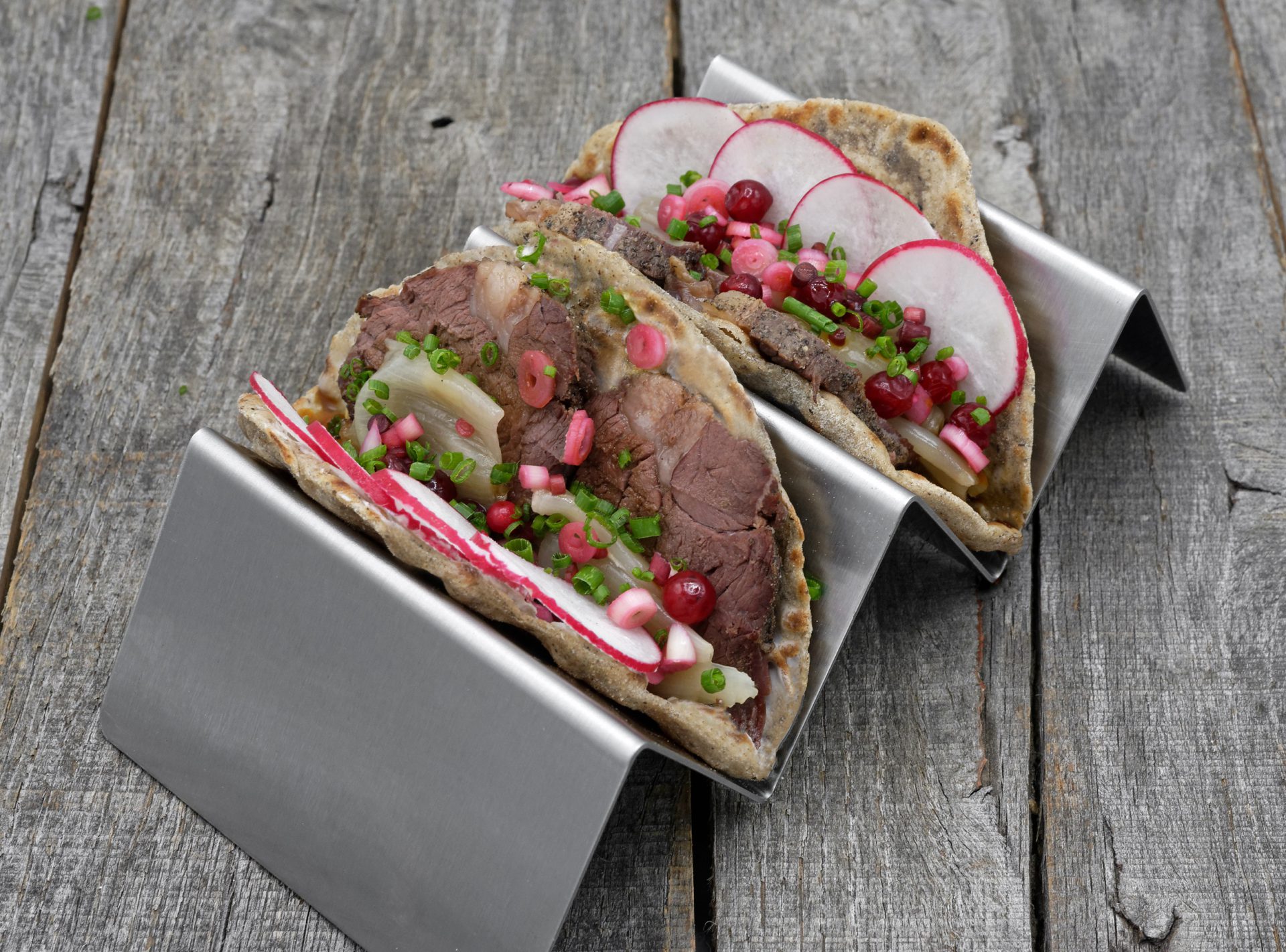 When I wrote about my recent trip to Lake Lacha, I mentioned the abundance of wild game in the area and the many alleged health benefits of consuming bear meat and bear fat. I marveled that you could even buy jars of locally made bear stew in nearby Kargopol, but complained that simple soups and stews were the practically the only form in which you encounter bear meat in Russia. I guess this makes sense at a hunting lodge, for hearty winter meals in the Far North or to preserve the meat longer. But how about something different? Just like pigs and cows, bears have legs, shoulders, bellies, butts, ribs, necks… Surely all these parts don’t need to be tossed into the same pot. And what about that bear fat that’s supposed so have many virtues? Can’t we do anything other than spread it on bread?

Yes, we can. This isn’t even the first I’ve explored this line of thinking. Way back in 2011, I posted the Vladimir Poutine, the improbable love child of two Frozen North cuisines. This time, I’m making a longitudinal move rather than a latitudinal one, and I’m contrasting wild ingredients from the Russian forests with hip urban dining from the capital. Russian Far North lodge meets Moscow gastrocafé, Austin meets Arkhangelsk. Margarita and the Bear. The Pastor and Margarita. I give you: tacos with smoky bear brisket slowly cooked in its own fat.

As I live in East Harlem, there’s no shortage of good Mexican restaurants in my neighborhood, and many of them turn out classic tacos that make breakfast tacos look the stupid American foodie trend they really are. This certainly played a role when I decided to take a chance with bear tacos; some of my go-to eateries serve lamb, beef tongue, tripe, so why not bear? By choosing a bear brisket cooked with smoked salt, I’m even adding a Texan touch to the dish. To seal this union of Tex-Mex cuisine and Russian flavors, I enrolled a whole cast of supporting ingredients:

Now, this list has lot of hard to find ingredients! But do not fear. Bear brisket (as well as many other cuts of bear) can be purchased at ElkUSA. They also carry bear fat, but only in the raw form, so you’ll have to render it yourself (instructions here – turns out this guy uses it to make tortillas, like me!) There also seem to be people selling rendered bear on Etsy. Otherwise, replace it with beef or bison tallow, both of which can be found on Amazon these days. I hear that bear fat can sometimes have a very pronounced flavor. That wasn’t the case for the one I bought (at the Arkhangelsk airport), but if you have such an issue you can use half bear fat and half tallow. I buy my frozen wild lingonberries (and many other rare berries) from Northwest Wild Foods. Buckwheat flour is widely available but I’ve been using the “rustic aromatic buckwheat flour” from Anson Mills. The best birch syrup I know is sold by Alaska Birch Syrup.

Serve with a shot of Zubrovka, a dash of smoked salt, and a wedge of lime.