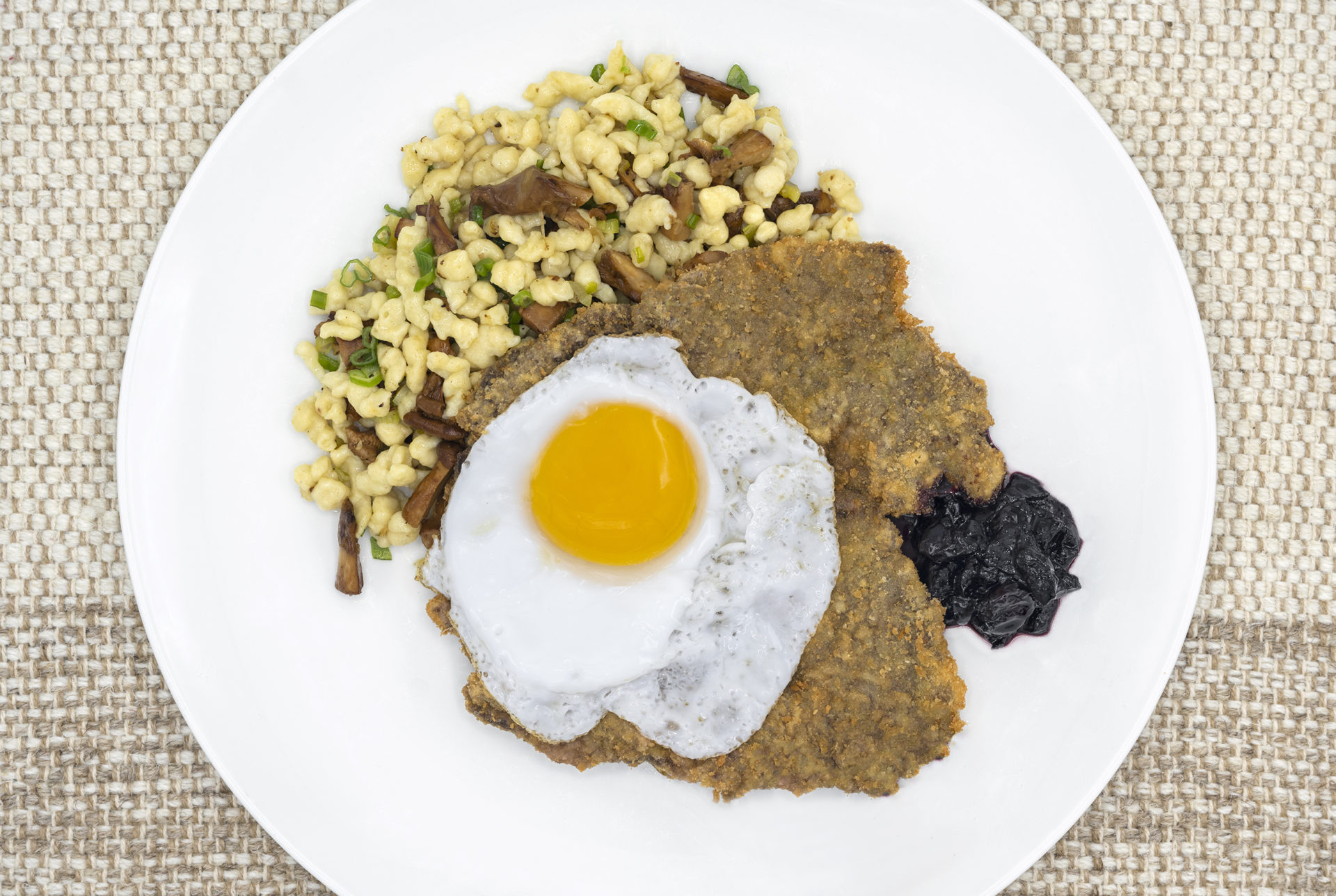 After the kielbasa, here’s another wild goose recipe to reserve for slightly more tender birds: a classic schnitzel with spaetzle. It won’t be the first schnitzel on this blog; over ten years ago, I published both a wild turkey schnitzel with Finger Lakes Riesling sauerkraut and red currant jelly, and a partridge schnitzel and meatball, red pepper sauce, corn and zucchini. But never have I told the story of this humble piece of breaded meat. Or, well, the “story”…

The German word schnitzel is a diminutive of schnitz, meaning “slice” (do you remember the cremeschnitte?). Its most popular variation, the Wiener schnitzel, consists of a piece of pounded veal, preferably from the hip, breaded, fried in butter, and traditionally garnished with a wedge of lemon and some potato salad.

However, breaded schnitzel is found only relatively late in Viennese cookbooks, the first surviving occurrence being in Ignanz Gartler’s Nutzliches Koch-Buch (Useful Cookbook) from 1740, where it appears as recipe number 232. Here with the help of Google Translate:

Veal schnitzel with Parmesan cheese and bread slices
Take a good leg, cut a small slice from it, pound it very wide, season with salt, sprinkle with flour and bake in lard until golden brown. Prepare small baked bread slices, arrange them in a dish with the baked schnitzel and grated Parmesan cheese in layers, sprinkle with good spices, pour a good chicken soup on it, and then let it boil well, so that it becomes very tender. When it’s time, put it on the counter.

Though there are about as many takes on the subject as there are cookbook authors, one prevailing theory for the Viennese specialty’s origins is that it doesn’t hail from a Germanic country at all, but is in fact a cousin of the Italian cotoletta alla milanese.

By some accounts, breaded veal was consumed in Italy much earlier than the 18th century. The name of Apicius is sometimes mentioned, though I haven’t found any similar recipe in my edition of his ancient Roman cookbook. There’s evidence that in 1134, a banquet served in honor of the canon of the Basilica of Sant’Ambrogio in Milan included breaded and fried veal loin chops, or at least “veal loin with bread” (still a pretty vague description), according to a report by the abbot.

Fast forward to the end of the 15th century, again in northern Italy. Among the Venetian aristocrats of the time, it was fashionable to decorate dishes with gold leaf, officially for dubious medical reasons but really just to show off their own wealth. The Great Council of Venice eventually banned the custom, and some chefs supposedly had the idea of breading the meat in an effort to reproduce the sought-after golden color. Within a few decades, the technique spread to the whole of Central Europe. In particular, the Viennese became fond of this new preparation method and started breading every piece of meat under the sun. Of course, the fact that it took another three centuries for schnitzel to make it into an Austrian cookbook casts a certain amount doubt about this uncorroborated tale…

Regardless of how exactly it got there, schnitzel remains very popular in Central Europe to this day. In Czech Republic, řízek is made of pork, chicken, or veal, served with boiled or mashed potatoes or potato salad, when it’s not consumed between two slices of bread as a sandwich for a lunch on the go. In Slovakia, rezeň or šniceľ is often prepared with pork or chicken, garnished with rice or anything potato – fried potatoes, boiled potatoes, mashed potatoes, fries, potato salad…  In Hungary, bécsi szelet (Viennese slice), borjú bécsi (Viennese veal) or rántott hús (breaded meat) is a common meal in homes and restaurants, often prepared on Sundays or for festivities with spaetzle, fries, mashed potatoes, or rice. And the popularity of the schnitzel doesn’t stop there: you’ll find variations in Croatia, Serbia, Bulgaria, Poland, Russia, Ukraine, Romania…

Sorry, but this still isn’t the time I’ll be serving my schnitzel with potato! Instead, I’m taking a Hungarian approach and making spaetzle, with the twist of adding celery root to the dough, and sautéing the pasta with chanterelles and scallions. A few sour cherries in a port wine reduction provide a nod to a classic goose pairing. Finally, you don’t need to get a hunting license to enjoy this dish: it works just as well with a farmed goose breast, a boneless pork chop, or a veal cutlet.