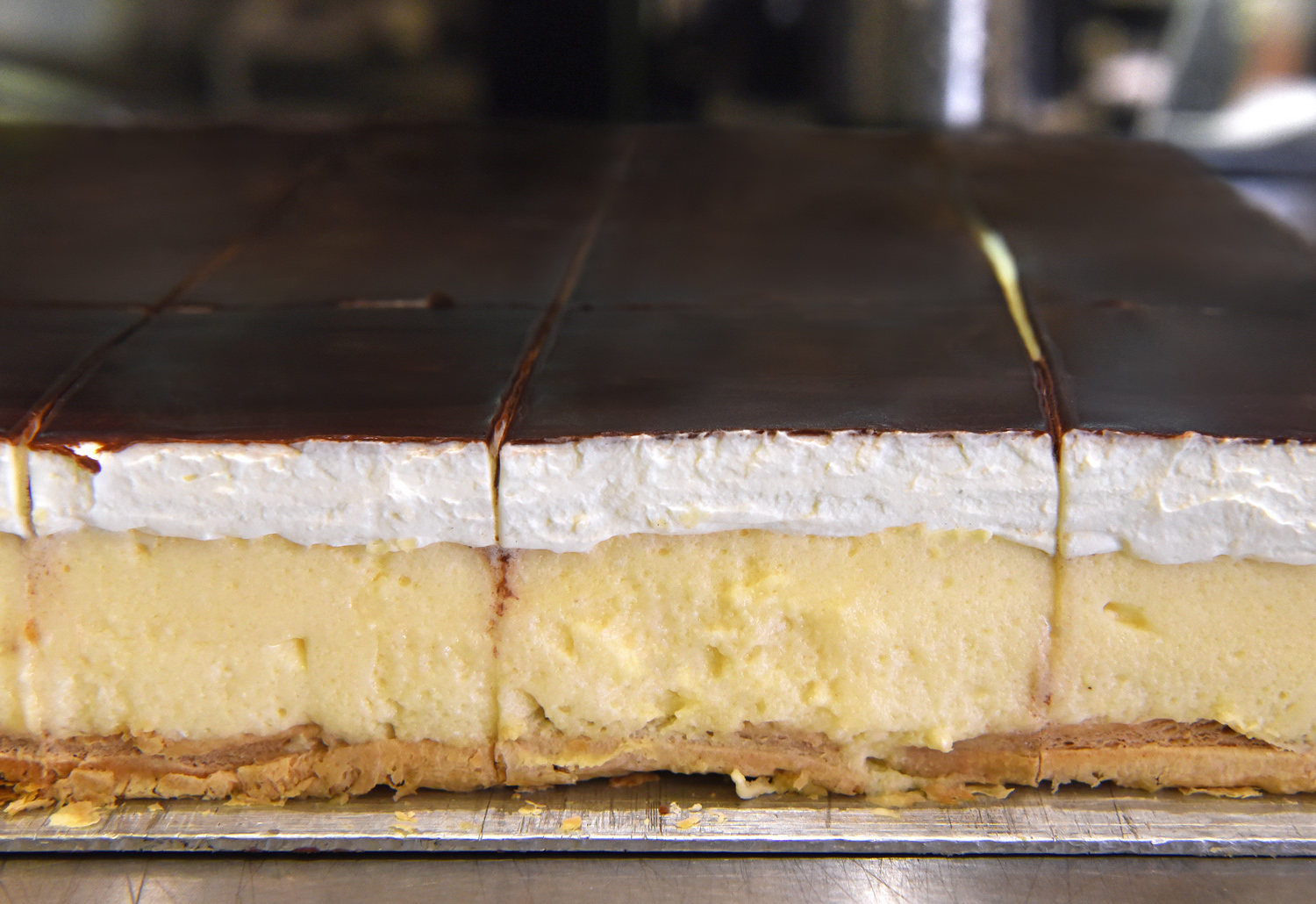 In my last post, I made my own contribution to Croatia’s culinary heritage by creating a new dessert, the Dalmatian Kremšnita. It’s now time to take a deeper look at the history of this cake. Kremšnita simply means “cream slice” in Croatian, although “custard slice” would have been more appropriate, since every variation contains various layers of dough and a custard-based mixture (whether it’s Chiboust cream, Bavarian cream, or just plain pastry cream), but whipped cream isn’t always present. There are two famous kinds of kremšnitas in Croatia:

The invention of the Samoborska kremšnita is attributed to one Đuro Lukačić (the strangely crossed Đ is pronounced Dy, so the name reads Dyuro). In the early 1920’s, young Đuro comes back to his native Samobor after spending some time apprenticing at the Zagreb patisseries (in particular the renowned Kostinčer and Hajoš). He naturally joins his brother Marko’s recently opened pastry shop, located on the main square. Đuro has a dream: to create a dessert that would rip off combine the best recipes that he’s learned, and could be named after his home town. The Samoborska kremšnita is born, and the rest is history: the shop prospers as patrons, local and Zagrebian weekender alike, form long lines that stretch across the square for a taste of the town’s sweet sensation (okay, I’m romanticizing a little). Since there’s no refrigeration and demand is so high, the cream slice is eaten warm. Lukačić officially retires in 1966, but still lends a hand regularly at the pastry shop, and takes up cake decorating as hobby. He dies in 1996 at the age of 87, without receiving any of the recognition that such a brilliant invention as his should have earned. 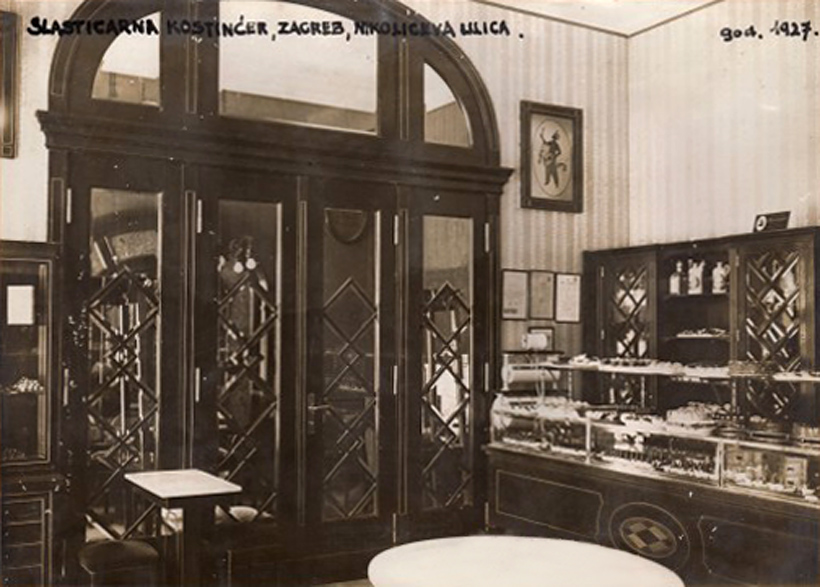 I must say that this whole Đuro Lukačić business leaves me scratching my head a bit… Did he really invent anything at all? Chiboust and Bavarian creams were all known in the 19th century. The French mille-feuille, the Russian Napoleon, the Hungarian kremes, the Austrian cremeschnitte, all predate the 1920’s, and they all look pretty similar to Samoborska kremšnita. As early as 1876, Urbain Dubois offers a mille-feuille with Bavarian Cream in his Cuisine de tous les pays: études cosmopolites (page 538). Even the word kremšnita is a Croatian adaptation from German cremeschnitte. Most likely, a form of kremšnita was already sold in the Zagreb pastry shops where Lukačić trained. In fact, he admitted that much himself, allegedly saying: “I liked Hajoš’s recipe best, but my proportions are slightly different”. So did he just bring a famous dessert to his tiny little town and get famous for serving it to those pesky Zagrebian weekenders who probably liked the countryside and its rustic charm only so long as it didn’t lag too far behind the capital? Taking my own current corner of the world for example, it’s as if were to move to the Catskills, tweak a Junior’s Cheesecake recipe, and call it the World Famous Genuine Catskills Cheesecake. Or move to Long Island, invent a chocolate babka recipe that combined all the other recipes I have ever come across, and call myself a baking legend. 1% pastry prowess, 99% marketing? I guess we’ll never know…

Regardless, the history of the kremšnita eventually comes full circle with the Zagrebačka kremšnita. After graduating from the pastry school in Varaždin where they learned the trade from famous Viennese cake and pastry makers, Stjepan and Ankica Vincek establish their pastry shop in the capital in 1977. They have a dream: “change the cake and pastry image of Zagreb.” To do this, they choose to revamp the tired custard slice and top it with… oh let’s see… the two most common ingredients in Austro-Hungarian desserts, maybe? Yep, whipped cream and chocolate! The internet doesn’t provide much more detail, but it’s safe to say that the Vinceks did get some of the recognition that such a brilliant invention as theirs should earn, as they now employ more than 100 people and own six shops, wherein they make everything from ice cream (over 40 flavors!) to adult cakes.

All right, time to taste kremšnita in its natural habitat… 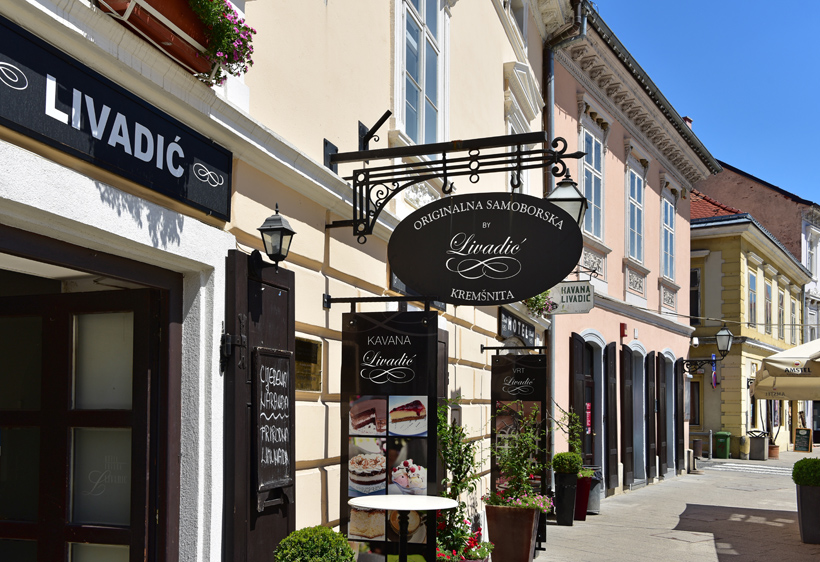 Today, Samobor fully embraces its culinary heritage. Every year, locals and visitors celebrate the “Days of Samoborska kremšnita” (I’m not sure if this festival is still happening, but you can take a look at a past edition here). There’s even a Samobor proverb that says that kremšnita opens all doors: in case of problems or disagreements with someone, offer a kremšnita, and all is forgiven. Many cafés dot the long King Tomislav Square. Livadić supposedly makes a kremšnita that’s served warm (like in the good old days), and has even opened a small hotel in case you want to start a kremšnita diet. Then there’s Mozart Bar, Saramassi Bar, and the famous U Prolazu. 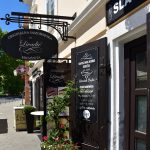 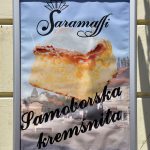 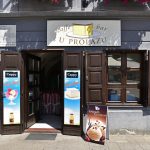 U Prolazu means “on the way” in Croatian. As the anecdote goes, the owners couldn’t decide what to call their pastry shop and asked Samoborians for suggestions. Local poet Joža Prudeus is quoted saying: “Listen, it’s best to call the place on the way. It’s Samobor, you have to eat kremšnita on the way. You come, you stop, you eat.” But U Prolazu is more than a café with a funny name where one gets drinks and desserts. The owner Branka Žganjer and her husband aren’t just anyone — they’re the disciples of Đuro Lukačić. 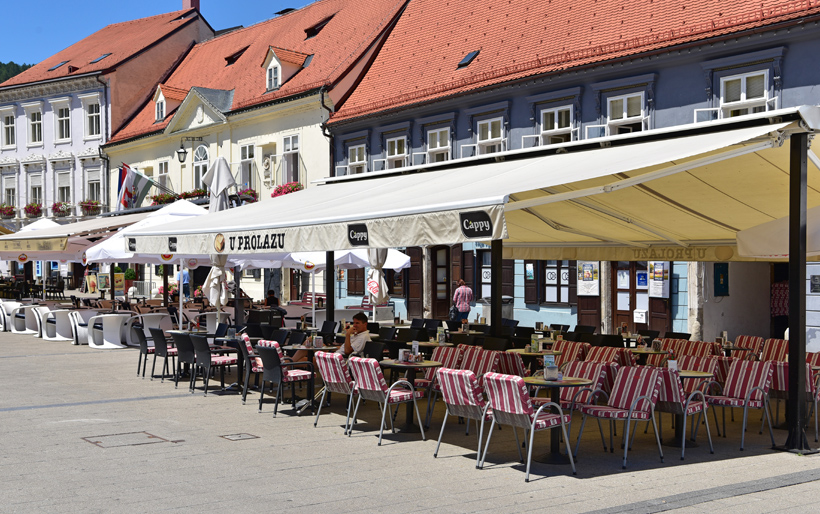 In other words, this is as close as you can get to the “original Samoborska kremšnita. For an even more genuine experience, die-hard fans wait for a new batch to come out of the kitchen so they can eat it warm. I hear that what makes the cake truly unique is that it contains only five ingredients: eggs, milk, flour, sugar, and vanilla sugar — no thickening or gelling agent. Even if you don’t know Croatian (WHAT?!), check out the pictures in this great article here.

What can I say? The vanilla custard mixed with egg whites is very airy and tastes like sugar with a hint of vanilla. Yes, you have layers of puff pastry at the bottom and at the top, and there’s confectioners’ sugar sprinkled on top. Some people eat it with a mound of whipped cream. Yawn. 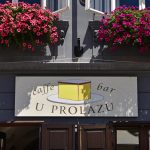 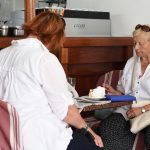 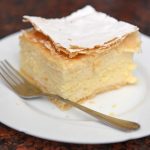 As I mentioned, you can still try the Zagrebačka kremšnita from the pastry chefs who invented it (or one of their 100 employees, at least). Vincek is celebrating its 40th anniversary, and still going strong. Conveniently, the hyper-central Ilica Street shop (which was the second to open, in 1993) was located right next to our hotel. It’s quite a happenin’ place, and there can be a long line, even at night — Croatia’s ice cream rush hour in the summer time. 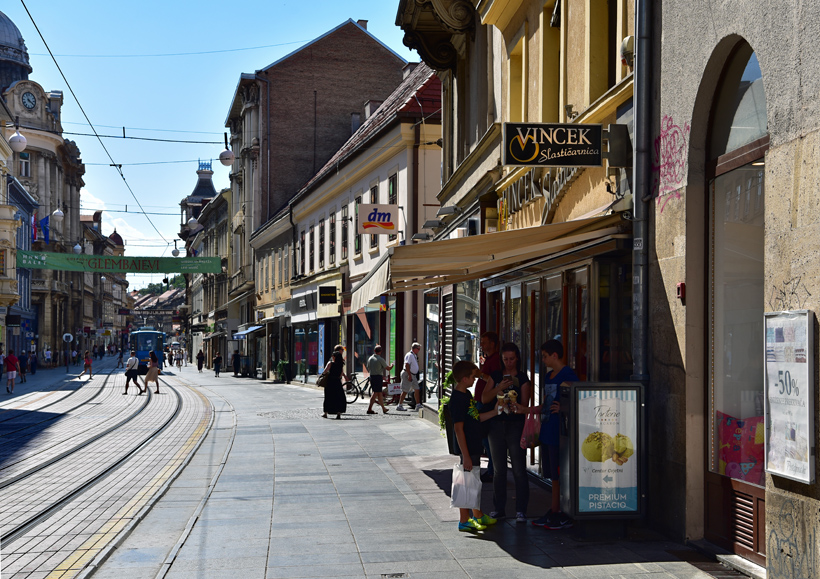 The Zagrebačka kremšnita is slightly more interesting than the Samoborska. The custard, the whipped cream, the puff pastry, and the chocolate icing offer a bit more textural variety. And who doesn’t like chocolate? Still, it’s all pretty boring stuff in the end. Ingredients (as listed on the signage): flour, sugar, milk, eggs, margarine, chocolate, vegetable fat, sweet cream, salt, vanilla sugar. Vincek also sells a chocolate kremšnita (a Zagrebačka kremšnita with a chocolate custard) and a Vienna kremšnita (essentially a triple-decker Samoborska kremšnita with food coloring). Since ice cream is everywhere in Croatia, and Vincek has so many varieties, I’m surprised there isn’t a frozen version of the kremšnita, either as a frozen cake or a sundae… 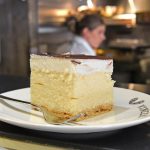 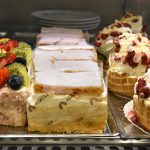 Back from a trip to Croatia, Food Perestroika has a dream: turn the boring kremšnita into something exciting by adding distinctly Dalmatian flavors to the puff pastry + custard template. The result is the Dalmatian kremšnita. Will I get the recognition that such a brilliant invention as mine should earn?