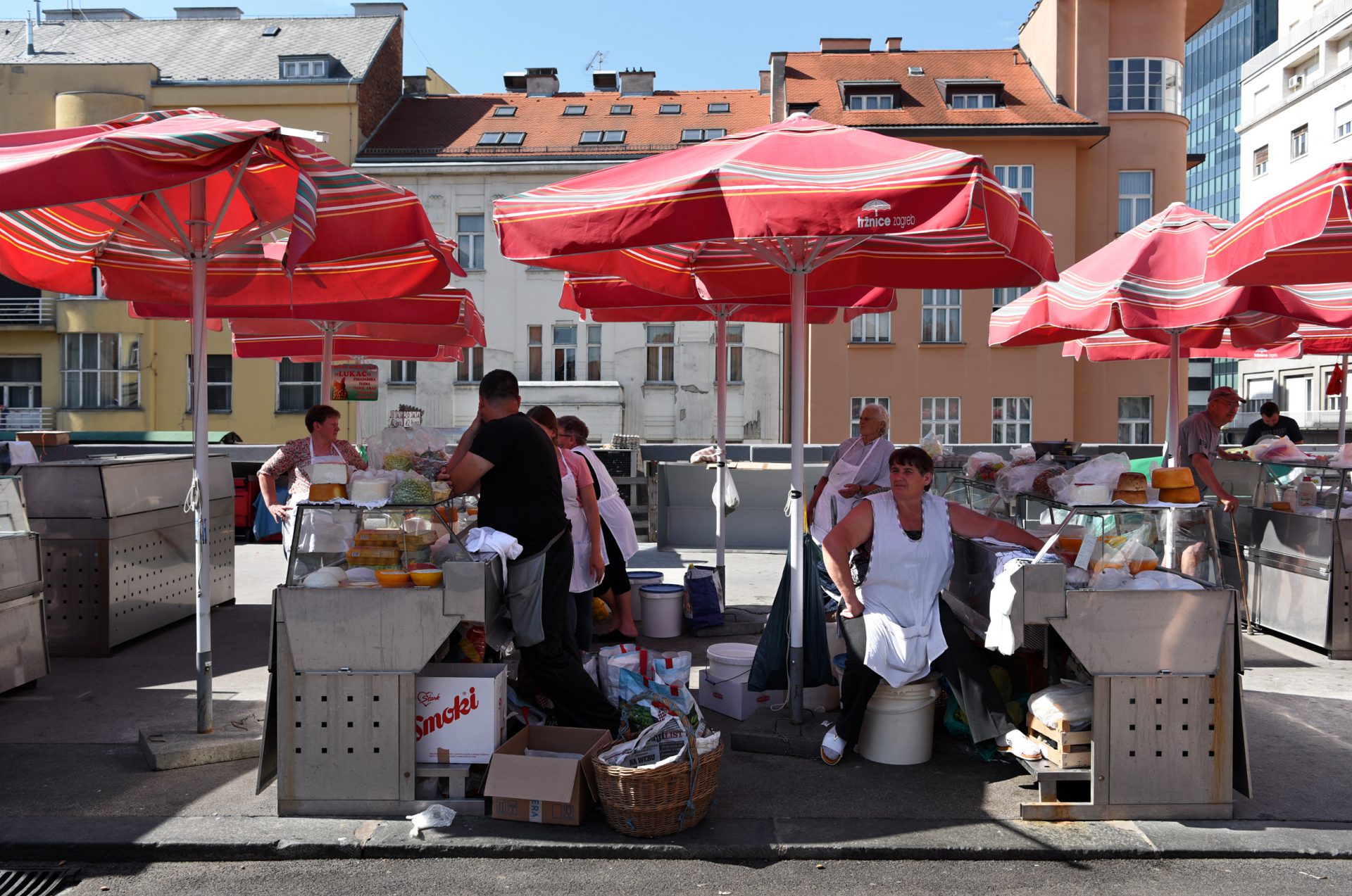 In my last post about Zagreb’s Dolac Market, I inundated you with information about meat production in Croatia. This time, as we continue our progression into the indoor stalls, we find ourselves in the dairy hall.

With a yearly cheese production oscillating between 30 and 35 thousand tons, Croatia is a minor player, ranked 28th out of 33 European countries in terms of volume in 2019 (source). Even for a nation of only 4 million inhabitants, the figure per capita is far behind countries such as France, Italy, or Germany.

But that’s not to say that there isn’t a strong tradition of cheesemaking in the region. In fact, the world’s oldest cheese traces were recently found on pottery fragments from Dalmatia! From northernmost Međimurje to the islands off the Dalmatian coast in the south, the whole of Croatia boasts centuries-old cheese recipes of surprising variety. Check out this link for a few regional highlights, and expect a dedicated post about Pag cheese in the near future. And though industrial production is in full swing, it’s still possible to find homemade cheeses on many Croatian tables.

This impressive caseic variety isn’t immediately apparent when you enter the indoor dairy section or walk past the few outdoor dairy stalls at Dolac Market. What you’ll see first is row upon row of vendors selling fresh cheeses. Going to the market to buy farm-fresh cream and cottage cheese (traditionally made from unpasteurized, naturally soured milk) remains customary in Croatia. Cottage cheese, made from cow’s or sheep’s milk, is a part of any self-respecting Zagrebers’ typical breakfast, and it’s used in eggs, strudels, burek, and štrukli, paired with either sweet or savory ingredients.

Another classic is prgica: cottage cheese seasoned with salt and paprika, shaped into cones, and left to dry (some variations are smoked or mixed with garlic or chives). The resulting semi-hard cheese is eaten on its own or in sandwiches and salads. And hey, you can buy prgica straight from Croatia on Etsy!!!

In 2018, Croatia’s milk production was approximately 618,000 tons for cow’s milk, versus 9,000 for goat’s milk and 7,000 for sheep’s milk. The production of cow’s milk cheese was about 31,000 tons, versus 90 tons each for goat’s milk and sheep’s milk cheeses (source). Two types of cheese dominate the production: medium hard cheese (43%) and fresh cheese (46%) – I suspect that cottage cheese, prgica, and dull supermarket cheese account for the bulk of them. Goat’s milk is also sold as-is or turned into yogurt or kefir. The sheep herds are concentrated on the islands, while cows and goats are bred in different parts of the country in accordance with each area’s tradition.

Perhaps not surprisingly since dairy and carbs are often consumed together, next to the dairy aisles are the vendors of the various dough products found in Croatian cuisine. First there’s pasta, as we saw the influence of Italian cuisine in my post on Zagreb’s finer dining establishments. Then there are sheets of dough – thin or thick, with or without eggs – used to prepare dishes of purely Croatian (štrukli), Central European (strudel) or Turkish (baklava, burek) influence.

Finally, halfway between pasta and flatbread, there’s mlinci: a dough made of flour, salt, and water, thinly rolled into large sheets and baked in an oven. Mlinci can then be broken into pieces to add to a soup. They also make the perfect vehicle to absorb the juices of large poultry and meat roasts.

Guess what my next recipe will be. Give up? Pasta with cheese!