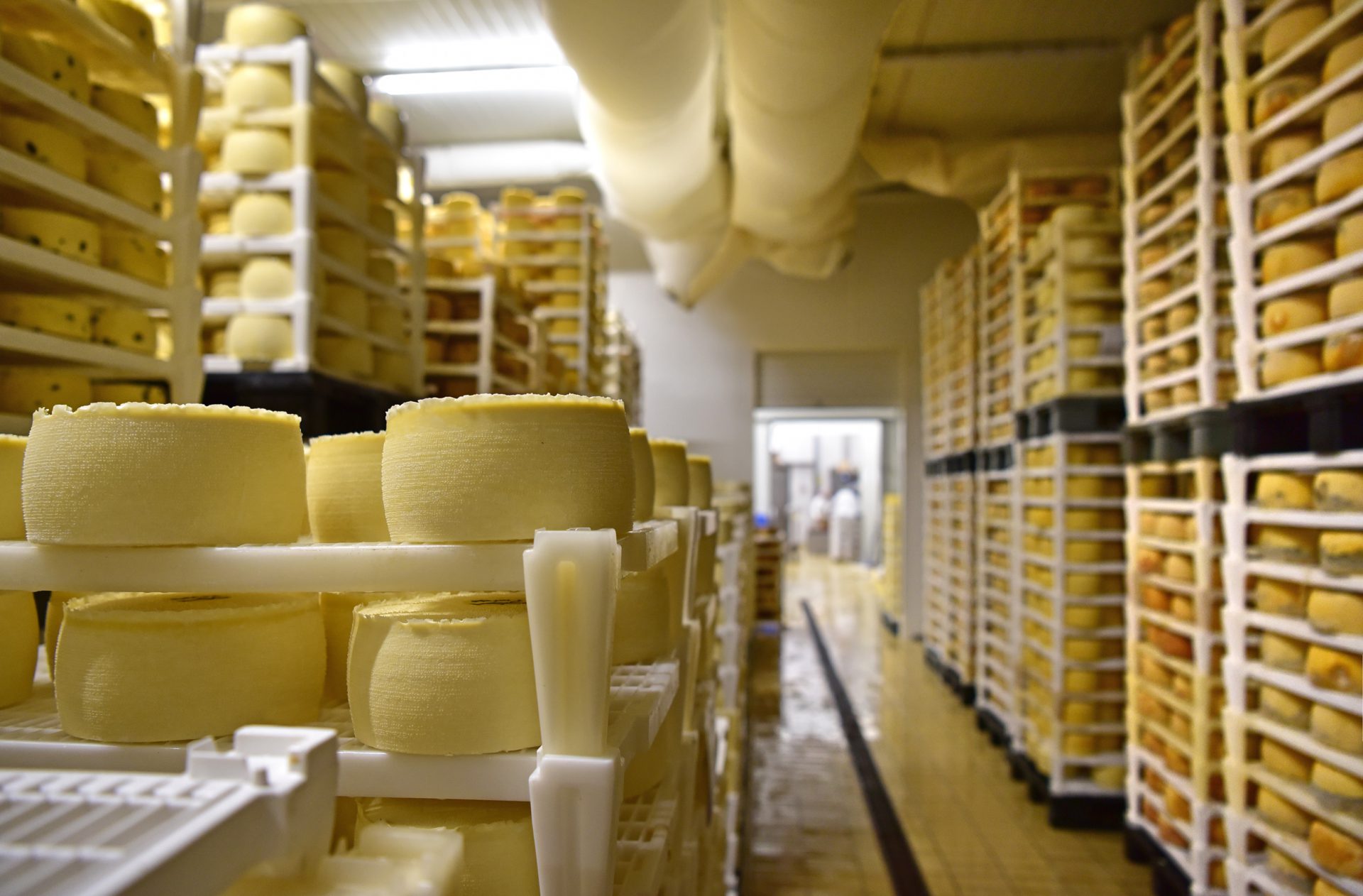 Some people travel to Croatia to enjoy the beach, take Game of Thrones selfies, and finish their nights at the disco. Perhaps they visit the occasional old Venetian town and enjoy a seafood meal washed down with local wine. But with its wineries and dairy farms, the country’s also a great agritourism destination. The island of Pag, where we’re headed today, has it all – except for the GoT locations, though it makes up for this with an alleged UFO landing site.

Situated in the northern part of the Dalmatian coast, Pag Island, population 9,000, is easily accessible from the mainland, either by car via the bridge at the southern tip near Zadar, or by ferry further north. Most of the island is rocky, with smaller areas covered with Mediterranean shrubs and olive groves. This arid landscape is home to an autochthonous breed of sheep (population 30,000), whose milk makes the island’s most famous product: Pag cheese (Paški sir in in Croatian).

Pag has a long tradition of cheesemaking, considered to be as old as sheep farming in the area and traceable back to 800 BC, when the Liburnians, an Illyrian tribe, became the first settlers. In 1774, the Venetian writer Alberto Fortis, who traveled extensively throughout Dalmatia, wrote about the island’s products, including sea salt, sage honey, wool, and cheese. On the hilly parts of the island, locals would milk sheep and make cheese in dry stone huts built on the rocky hills above the pastures. In the early 20th century, the pastures were fenced with dry stone walls (still visible), and shepherds left their huts to move back to the villages. Pag cheese progressively became a popular product sold at markets (continuing to this day) and a significant source of revenue for the island. In 1946, the newly created Republic of Yugoslavia founded an agricultural cooperative for the production of Pag cheese, expanding distribution of the island’s favorite product even further.

In 2019, thanks to the efforts of an association of the main producers, Pag cheese received a Protected Designation of Origin from the European Union. The PDO covers all the defining characteristics of Pag cheese: the production method (it’s a hard cheese made from sheep’s milk), the geographical area of ​​production (Pag and two neighboring islands, for both sheep farming and cheesemaking), and the farming method (the sheep must be of the Pag breed and reside on fenced pastures).

So what makes Pag cheese so unique? Mainly, the climate and terrain provide distinctive conditions for making cheese. To the east, the Velebit mountain range on the mainland gives birth to the bora, a strong, cool, dry wind that gathers strength as it tumbles down the slopes onto the sea to generate a dry salt dust that scatters all over Pag (which is the most indented island in the Adriatic), making the land white and salty. It also explains why Pag has a long history of salt production, believed to date from Roman times. In this environment, only a handful of resilient, fragrant plants survive, such as Pag sage and its purple flowers, yellow everlasting, cistus, Christ’s thorn, wormwood, and fennel. In the spring, colorful blooms contrast with the white karst of the land. All this salty and aromatic vegetation feeds the white Pag sheep that graze freely in the meadows and among the rocks, and gives their milk a unique taste.

To watch how Pag cheese is made, we’re heading to Gligora Cheesemakers (Sirana Gligora in Croatian), in the village of Kolan – the heart of Pag cheese country.

The history of Gligora Dairy starts with its founder Ivan Gligora, born on the island in 1950 to a poor peasant family – the family house can be seen today next to the dairy. Ivan’s grandfather and parents farmed sheep and made Pag cheese. At first, Ivan isn’t interested in carrying the torch. He enrolls in a pedagogical school in Rijeka on the mainland, with the financial support of his brothers. Eventually, money runs out and he has to look for a scholarship. Supposedly by chance, he reads in a newspaper that the Zagreb Dairy just so happens to offer scholarships for students interested in milk production. Ivan finds himself drawn back to his ancestral fate and studies in the only school in Yugoslavia to have its own dairy (in Kranj, Slovenia). After graduating in 1970, he’s sent back to his native island, to a branch of the Zagreb Dairy called, with the creativity so characteristic of communist countries, Pag Cheese Factory.

After a few years, now married, Ivan moves to Zadar to work as a laboratory technician at a larger dairy, where he stays for 20 years, becoming production manager along the way. Following the Croatian War of Independence, he once again returns to his beloved island and to the Pag Cheese Factory, this time as production manager. But in 1995, he decides to start a small dairy in his hometown – in the basement and garage of the family house, Steve Jobs-style. The first years are tough: not only is the economic situation in Croatia less than ideal, one can also assume that the Pag Cheese Factory is less than pleased by the competition. The new venture almost goes bankrupt several times. But after the dark ’90s, many former communist countries are progressively getting out of the woods, and the early 21st century sees the first international recognition for Gligora’s cheeses. In 2009, Ivan, now joined by his son Šime, completes the construction of a new, much larger factory at the same location.

Today, Gligora purchases milk from over 200 partners from Pag (used to make Pag cheese) and from the regions of Dalmatia, Lika, and Kordun (for other cheese types), and produces over 450 tons of 40-something different types of cheeses a year, including about 50 tons of Pag cheese. There are cheeses made from cow’s milk, goat’s milk, and blends (cow’s and goat’s milks, cow’s and sheep’s milks, all three kinds). They can be aged for a few months or for up to two years. There’s also Pag skuta, a kind of ricotta made from the whey left over from the production of Pag cheese – and there’s skuta made from other kinds of whey, too. Some cheeses contain olives, Istrian black truffles, pumpkin seeds, pepper, lavender, rosemary, or other herbs. Some cheeses are ripened in ash, Marasca cherry pomace, grape pomace, or olive pulp. Gligora’s cheeses can be ordered online and shipped all over Europe.

And the factory’s open to visitors! Here’s a video showing both the pastures on the island and the cheese production.

Pag cheese, as per its PDO, is made from 100% sheep’s milk from the island. The production is seasonal, and the sheep are milked twice a day, mostly manually, from January to June. On average, one sheep gives 0.75 liter of milk a day (1 liter maximum). Considering that one cheese of 2.5 kilos requires about 20 liters of milk, it means that one sheep yields 6-7 wheels per year. Gligora owns only a small flock of sheep, something like 99% of the milk is purchased from other farmers. After each milking, over a hundred sheep’s milk producers on the island bring their milk to gathering points where it is stored and cooled before being dispatched to the factory. Cow’s and goat’s milks (and sheep’s milk not used for Pag cheese) are brought from other parts of Croatia. The types of cheeses produced on any given day depend on the milk that was delivered, on the current inventory, and on customer demand.

First, an on-site laboratory tests the quality of the received raw milk by taking samples from the deliveries. Once tested, the milk is filtered, and optionally pasteurized, depending on the season and the needs (Gligora makes both raw milk and pasteurized Pag cheese, for example). Then it’s heated to about 30 C, inoculated with rennet, and left to curdle for half an hour. At that point, the curds are cut and heated to about 40°C. Small coagulated grains, the size of wheat grains, form and continue to develop with heat. Next, the curds are drained and transferred to round molds with tiny holes, to be pressed. Cheese is officially achieved! Meanwhile, the whey is filtered and used to make skuta.

The cheeses are pressed in their molds for several hours. After that, they’re salted in large pools of brine, where they remain submerged for a day or two. When they’re taken out, they dry on shelves located in the same room, and finally they’re sent to the maturation room.

We’re now going downstairs to the maturation room. Before us lay racks upon racks of cheese, 100 tons of it at any given time. That’s a lot of cheese! Ventilation maintains the whole room at a temperature of approximately 14 C, with a humidity level around 80%. Maturation lasts anywhere between 60 days and 2 years to produce semi-hard to hard cheeses. Cheese aged over a year, which tends to crumble when you slice it, is labeled extra-old. This doesn’t mean that the workers have nothing to do, though: each cheese is turned once a week, and washed in brine and rubbed with oil once a month to remove the mold that forms on the surface and improve preservation. In some cases, ash, pomace (from cherries or grapes), or olive pulp are applied during the ripening.

Our guide draws our attention to a few shelves filled with brown-colored wheels. No, it’s not chocolate; it’s an extra-old version of Kozlar cheese, covered in brown paraffin. Kozlar is made from 100% goat’s milk from northern Dalmatia (koza means goat in Croatian, and Kozlar is also the name of a locality in Kolan where perhaps goats were once herded). The best wheels of Kozlar are selected for extended maturation during which they’ll lose up to a third of their weight. Paraffin is required with extra-old goat’s milk cheeses in order to prevent excessive mold growth. When cut, the cheese is still completely white inside. Gligora recommends using it a bit like Parmesan, in particular on pasta.

Once fully ripened, the cheeses are labeled, packaged, and sent to stores (Gligora runs 13 shops in Croatia’s largest towns, including a stand at Zagreb’s Dolac Market).

Here’s another video showing Pag Island and the Gligora factory, taken from a French TV documentary:

If you don’t have time to visit Gligora in Kolan, you can also purchase many local cheeses right in Pag town, at the Siroteka cheese shop. This shop, however, only sells the cheeses of the Paška cheese factory (Paška Sirana in Croatian), the island’s other large producer and the direct descendant of the Yugoslav factory created in 1946, where Ivan Gligora used to work before starting his own business.

Or you can sit out on the terrace of one of Pag’s restaurants and order a cheese plate. Trapula Wine & Cheese Bar, for example, offers a cheese plate called “Pag triangle” (either because Pag cheese is traditionally cut into triangles, or because there are three cheeses included, or in reference to that other Pag Triangle… or maybe because the former proves the authenticity of the latter), a selection of three Pag cheeses – young, old, and traditional. The young cheese is quite similar to a mild manchego, in terms of both flavor and texture. The old one is really like Parmesan, maybe fruitier. The traditional cheese is apparently made by Trapula’s owners, from raw milk, I assume. It has the same texture as the young cheese, but a more rustic and pronounced taste, a bit barny – this might be my favorite. The delicious fig preserves served on the side go well with the cheese and help balance its dry mouthfeel.

I’ve already mentioned that Pag cheese can be found throughout Croatia and that Gligora’s web shop ships all over Europe. Paška Sirana, on the other hand, exports its one-year-old Pag cheese to the US (buy it here or here). And with that Pag Triangle business, maybe aliens eat Pag cheese too. Who knows?