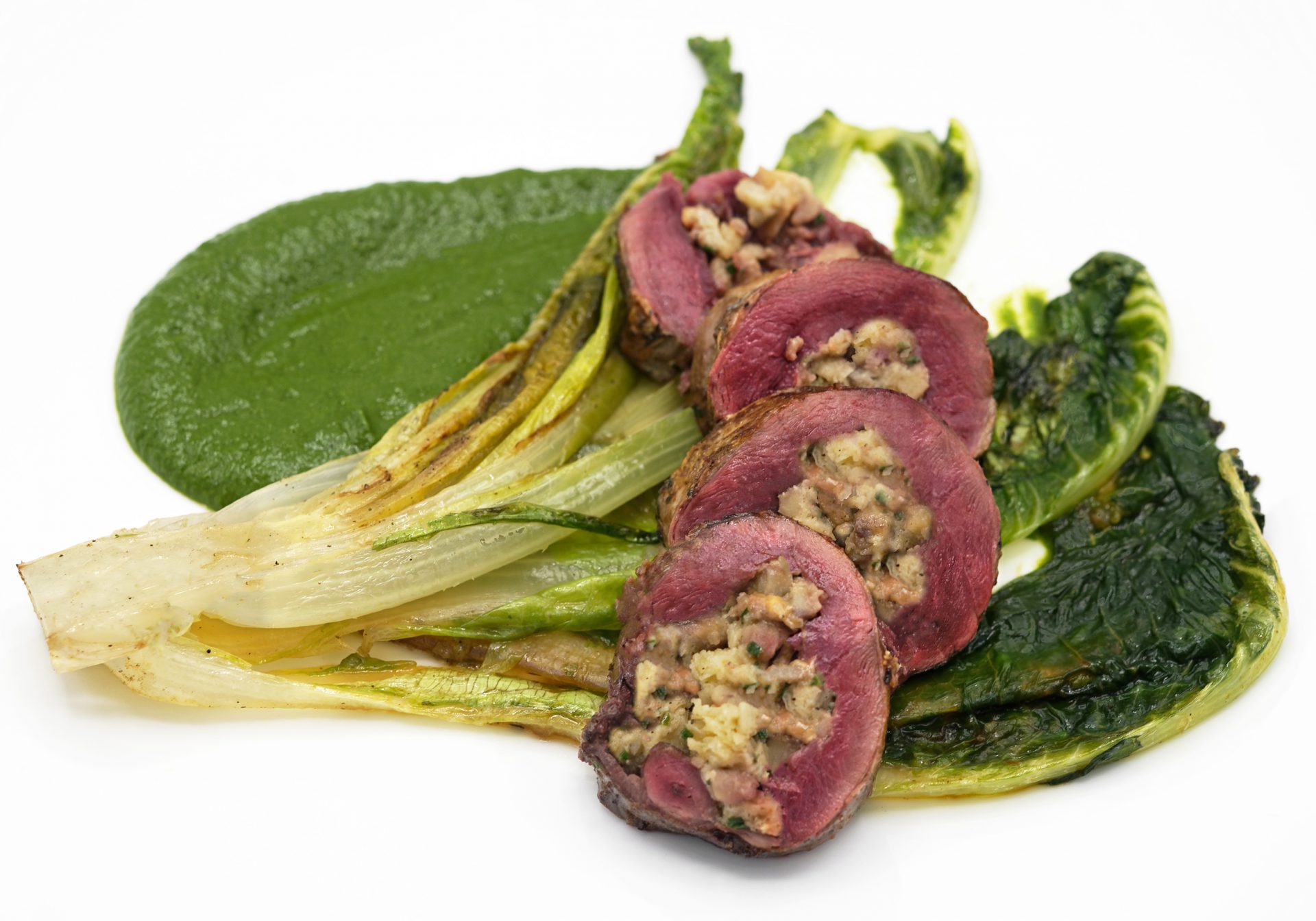 With about a foot of snow covering New York City right now, I have to face facts: winter’s here, and it’s time to stop posting about sunny Croatia and Mediterranean cuisine until next summer! So I’ll be getting back to my recipes from the Russian Far North soon, and as a preamble, here’s a Russian-ish holiday game recipe, inspired by two entries from The Derrydale Game Cookbook: Grouse à la Moscovite and Braised Lettuce à la Russe.

This isn’t the first time I tap into The Derrydale Game Cookbook – some of this blog’s first recipes included a pheasant à la Russe and a partridge breast and dumplings in Tokaji sauce. But let me say a few words about its author, Louis Pullig De Gouy. De Gouy (born in 1869 in France; died in 1947 in New York City) began his career as a chef under his father, Jean de Gouy, Esquire of Cuisine to Emperor Francis Josef of Austria. He then apprenticed under the famous Auguste Escoffier before working in some of the greatest culinary establishments in Europe and America. His longest tenure was his 30 year association with the Waldorf-Astoria Hotel. He was also Gourmet Magazine‘s first chef when it was founded in January 1941, a consulting editor and chef for Restaurant Management Magazine, and a consulting chef for the National Hotelmen Association of America. He left behind thousands of recipes, many of which were published posthumously in several cookbooks. You can check out this article for more details. And as if all that wasn’t enough, in his spare time, De Gouy traveled extensively across Russia to document the culinary habits of its diverse and multi-ethnic population, from Nicholas II’s table to the muzhik‘s humble gruel…

…Or, no, he didn’t. In fact, I’ve found no evidence that he ever went to Russia. But just like his mentor, Escoffier, De Gouy perpetuated the habit of calling “Russian this” and “Muscovite that” (probably interchangeably) a number of recipes that the European imagination had at some point associated with anything remotely Russian. Russia being known for its varied feather and fur game, The Derrydale Game Cookbook is peppered with these more or less fanciful “Russian” recipes. Grouse stuffed with chestnuts and bread soaked in cream sauce can pass for something that would be served at the tsar’s court. On the other hand, I’m more doubtful about Iceberg lettuce braised in chicken stock and tossed in spinach purée, especially considering that the Russian language uses imported words for lettuce, spinach, and purée!

I’ve taken some liberties with De Gouy’s recipes. The original grouse à la Moscovite calls for tarragon and pistachios in the stuffing, and is wrapped in pork fat rubbed with vodka – I’ve skipped all that. A few pages further in the cookbook, however, a grouse à la Pavlova (“used to be the favorite dish of the famous, indisputably the greatest dancer in living memory, of the Ballets Russes, Anna Pavlova”; though since nobody except De Gouy mentions the recipe, it’s more likely that this was just be a dish that he served to the ballerina at one of his restaurants one time) is stuffed with bread soaked in cream sauce (again) and goose liver, and this inspired me to add foie gras to my own stuffing. The braised lettuce à la Russe seems to be the recommended accompaniment to the grouse à la Pavlova, and my main change to that recipe has been to keep the spinach purée separate, lest the dish looks like an unappetizing green mess.

Finally, as grouse is a rare and expensive delicacy, it makes sense to try to use every part of the animal. I have a friend who religiously sucks every bone of the grouse once he’s done with his meal, attempting with hissing suction sounds to extract every last drop of juice, every last particle of meat. The grouse à la Moscovite is entirely boned, which leaves us with the carcass and offal – plus the wings and drumsticks (whose meat is so tough that I consider it inedible if it’s not cooked in its own distinct preparation). Discarding them would be heresy! So in a second service, I’m preparing a strong, reduced grouse broth, served in a little liqueur glass, with a cube of seared foie gras on a skewer, as a memento of the glorious bird. The most motivated among you, dear readers, could even grind the drumstick meat and put it back on the bone to make a kind of game lollipop.