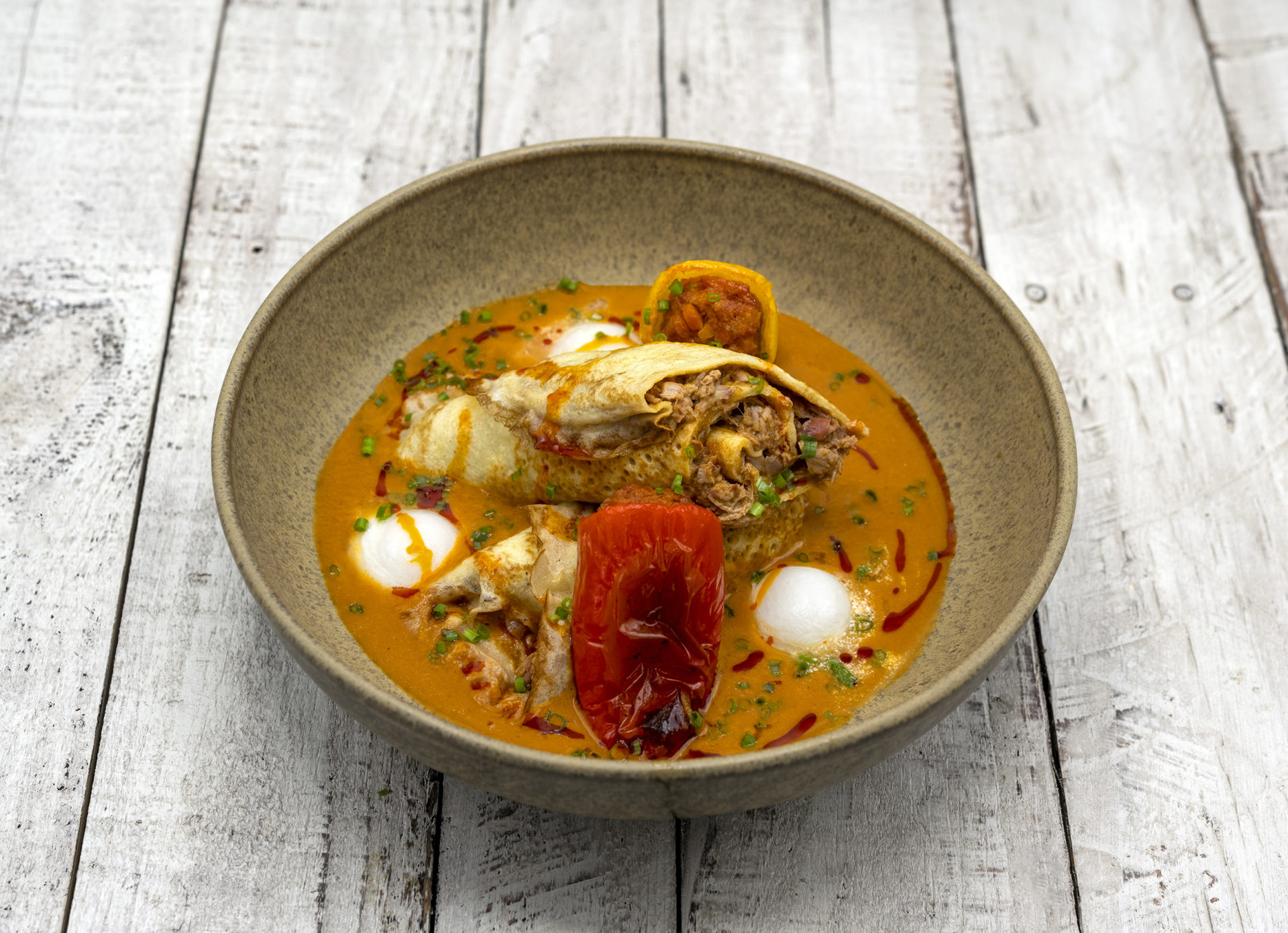 Situated in eastern Hungary, the village of Hortobágy is in the center of the puszta, an exclave of the Eurasian Steppe. It’s the birthplace of the Hungarian cowboy – the csikós. Nowadays, tourists flock to the local ranches to watch spectacular horse shows, including “the most ambitious riding show on earth,” according to Lonely Planet. During their long days in the fields watching the cattle, horsemen recharge their proverbial batteries by preparing a veal paprika stew in a cauldron over an open fire. While the meat cooks, they mix some flour with the morning’s milk (adding an egg or two if they’re lucky enough to own some hens) and make pancakes on a skillet placed over a few embers. To finish, these gourmet horsemen chop the stew meat into small pieces, mix it with sour cream, fill the pancakes with this mixture, then arrange the pancakes on a dish and top with sauce. The hortobágyi palacsinta (Hortobágy pancake) is served! And to think that cowboys in the Old West lived on beans, biscuits, and dried meat, ha!

Okay… so, this story is not quite true. Hortobágyi palacsinta doesn’t originate from the Hortobágy region. In fact, it’s got nothing to do with Hortobágy, the Great Hungarian Plain, or cowboys at all! It was invented for the Brussels World’s Fair of 1958.

I’ve already talked a bit about the 1958 Brussels World’s Fair in my post about Somlói galuska. For each of the two superpowers of the Cold War, the first exhibition of its kind since World War II is seen as an opportunity to showcase their opposing ideology and way of life. On the USSR side, massive statues of Lenin or of a worker and a kolkhoz woman stand alongside replicas of Sputnik 1 and of the first nuclear icebreaker (named after Lenin, of course). On the US side, visitors attend fashion shows and concerts, discover computers and color television, and eat ice cream.

Sandwiched between the two massive pavilions, the Hungarians are nonetheless arousing a lot of interest, partly because of the revolution that took place less than two years earlier. A country where Communist rulers are still subjecting their society to counterrevolutionary red terror certainly clashes with the expo’s ideal of “a more human world,” and with its disastrous economic situation, Hungary can barely afford to have a presence in Brussels. But the new regime led by János Kádár is in search of legitimacy. Rather than making a spectacle of socialist loyalty as one might have predicted, the Hungarian authorities want to distance themselves from their pre-revolution Stalinist regime and focus instead on showing the world their small country’s cultural achievements, and feature exhibitions of everyday life that contradict the West’s impression of joyless life under socialism. Precisely because of the Hungary’s lack of funds, it has been decided that the income from the pavilion’s retail stores, restaurant, and pastry shop must more than cover, in hard currency, all the costs incurred in its construction. This gives the restaurant in particular a double mission: fly the colors of Hungarian gastronomy to prove that there’s more to it than paprika and foul gruel, and make money for the communist state.

To help ensure success as both propaganda weapon and cash cow, the helm of the kitchen is given to János Rákóczi. The famous 61-year-old chef worked in France before the war and even met Escoffier. Back home, he’s a veteran of the best hotels in the country: the Palace Hotel in Lillafüred, then the Gellért Hotel and the Bristol Hotel in Budapest. He even gave his name to a dessert (the Rákóczi cottage cheese cake) – and when it comes to desserts, Magyars do not mess around.

At the World’s Fair, the chef serves many Hungarian classics: chicken paprikash, zander from Lake Balaton, pork medallions with lecsó, Transylvanian mixed grill, strudel… But he also promotes recently-invented dishes like Somlói galuska and his own creations: the supercharged beef tenderloin Budapest-style (with lecsó, green peas, mushrooms, goose liver, rice and potatoes; you might remember it from my recent review of Bock Bisztró), or the famous pancakes Hortobágy-style. In a sense, this is the pinnacle of Magyar cuisine during the communist era. Rákóczi retires in 1961 and dies in 1966, which gives him just enough time to collect his recipes in a cookbook, Konyhaművészet [The Art of Cooking], published in 1964.

Taken from that book, here’s a translation of Rákóczi’s recipe for Hortobágyi palacsinta. Why Hortobágyi? Unknown.

Make a pörkölt from the veal. When the meat has softened, take it out of its sauce and chop it finely. Add half of the sauce, 1-2 tablespoons of sour cream, and simmer until the meat has the texture of a paste. Fill the pancakes with this mixture, fold in half and roll up, then place in a fireproof dish and heat in the oven. Combine the other half of the sauce with sour cream mixed with flour, bring to a boil and filter. Pour this paprika sauce over the pancakes and serve hot.

In 1962, Hungary’s Minister of the Interior decrees that the state catering industry must use only the new Unified Catering Recipe Book to create its menus. With that, the country’s gastronomy sinks into a dark, dark age.

At least that’s how the story goes. But was hortobágyi palacsinta really invented for the 1958 World’s Fair? Rákóczi didn’t pull the idea for the dish out of thin air – far from it. The 1939 book A gyakorlati főzés tankönyve száz ebéd keretében [Textbook on Practical Cooking through a Hundred Lunches] by Andrea Kollmanné Lemhényi Dávid, already contains a recipe for a kind of Hungarian lasagna featuring the same ingredients:

Make a veal pörkölt and bake pancakes. Finely chop the prepared stew with a large knife and place in an ovenproof bowl, layered with the baked pancakes. Pour the pörkölt sauce mixed with sour cream on top. Bake on the middle rack of a oven preheated on low for 15 minutes.

(It should be noted that a palacsinta, though translated as pancake in most cookbooks and in this post, is really supposed to be wide and thin, like French crêpes or genuine Russian blini.)

Even before that, Elek Magyar’s 1932 volume Az ínyesmester szakácskönyvek [The Gourmet’s Cookbook], considered the bible of Hungarian cuisine – anything that’s not in it simply does not exist in classical Hungarian gastronomy – includes, somewhere in the middle of its approximately 2000 entries, a recipe for meat pancakes:

Make a regular pörkölt from veal or lean pork. When done, take the meat out of the sauce, mince with a little sour cream and mix with an appropriate amount of sauce. Make pancakes without sugar, fill with this mixture and roll. Bake in fireproof dish in the oven for 10 to 12 minutes.

And there’s more before that! In 1909, A Divat Ujság Főzőkönyve: Legtartalmasabb magyar főzőkönyv [Cookbook of the Fashion Newspaper: The Most Comprehensive Hungarian Cookbook], which clocks at a whopping 2300 recipes, includes pancakes filled with chicken paprikás:

For the filling, cut into pieces a small but meaty chicken (one chicken is enough for six people). Simmer with finely chopped onion and good Szeged paprika until tender, then take out the meat and mix sour cream into the sauce. Take the chicken off the bone, chop very finely, put back into the sour cream and paprika sauce, and simmer a little. Bake the pancakes as thin and crispy as possible, stuff them with meat filling and roll them up. Place in a good strong porcelain plate, cover with a little salted sour cream, then bake until the top is crispy and the whole dish is hot, and serve to the table.

And really, in a country known for its pancakes (not to mention its strudels) and its paprika stews, chances are that the idea to combine the two arose even earlier than that – perhaps in the 19th century, a few decades after paprika became a staple of Hungarian cuisine (see my short history of the beloved red pepper powder here). After all, it could very well be that somewhere on the Great Hungarian Plain, people were indeed eating pancakes filled with veal pörkölt and sour cream!

My recipe is inspired by the Hortobágyi palacsinta I ate at Bock Bisztró in Budapest, especially in terms of presentation: the fat pancake cut in half, the vibrant colors, the drizzle of red pepper oil, the sour cream pearls. The methods of preparation are distinctly mine, though. The veal, from the shank, is cooked sous vide. The red oil is made with smoked paprika. For the sour cream, I opted for salty half-spheres made using a technique called reverse spherification (you can buy the necessary ingredients and tools here). I even take the same ingredients but combine them differently to make stuffed mini peppers. Maybe this updated version can be served at the Hungarian pavilion of the next World Expo…