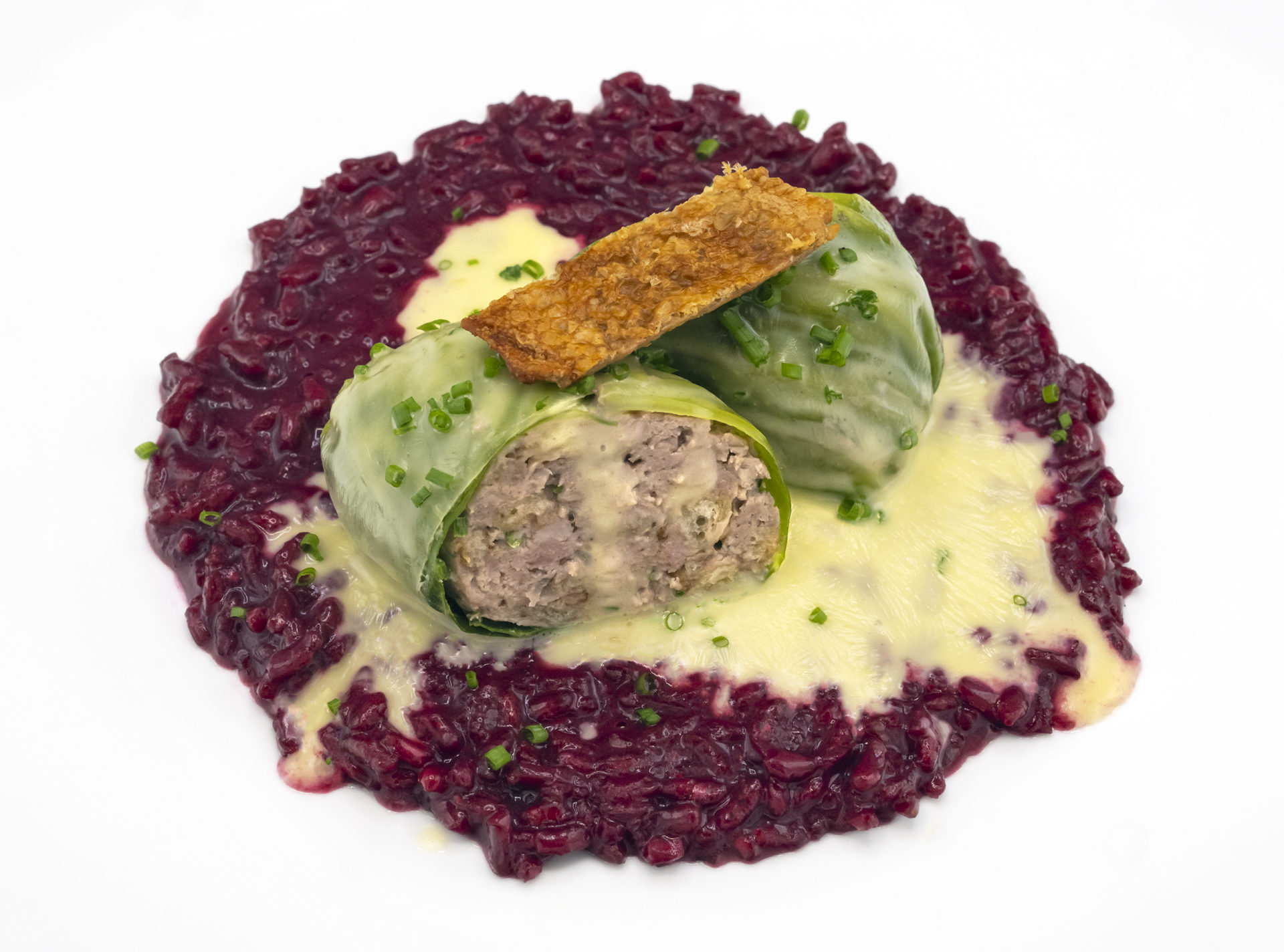 With the holiday season now upon us, I’d like to once again plug my cookbook, The Goulash Archipelago. Yes, it’s written in French, but A) Amazon France ships worldwide, B) the book boasts over 300 superb pictures and an outstanding design, and C) most people make only a couple of recipes from cookbooks they own, so even if you don’t speak French and never prepare a single one of the dishes, you won’t fall too far below the average! If you do speak French (or merely have a translation app on your phone), you will find plenty of recipes that will delight your guests for end-of-year celebrations: foie gras, caviar, king crab, decadent salads and soups, game birds, massive steaks, intriguing cakes – it’s all there! As a teaser, here’s a recipe from the chapter on Ukraine and Moldova that nicely complements my recent posts on waterfowl hunting: stuffed cabbage, aka golubtsy, made with duck meat and served with a red beet risotto and goat cheese sauce.

Whether it’s called golubtsy in Russian, holubtsi in Ukraine, or sarmale in Moldovan, stuffed cabbage is found in all Eastern European cuisines. The dish originates from Turkey (sarmak means “to wrap” in Turkish) and was first prepared with vine leaves stuffed with rice and minced lamb (what we now usually call a dolma). When it spread through the Ottoman Empire, Ukraine, and Russia, ingredients were adapted for local products – cabbage and pork replacing vine leaves and lamb, for example. In the 18th century, the Russians decided to call the dish golubtsy, in reference to the grilled pigeons (pigeon is golub in Russian) popularized by French cuisine. Why? Because they have the same shape, of course! If you don’t see it, just have another shot of vodka.

Ukraine counts many golubtsy recipes. Depending on the region, the wrapper consists of a leaf of cabbage (whole or cut into pieces), chard, or vine, and the filling a mixture of potato, corn, or buckwheat combined with fried onions, pork crackling, or ground meat. The bundles are simmered in a tomato or cream and mushroom sauce. The dish appears in everyday and festive meals alike. In the Soviet Union, one recipe gradually took precedence over all the others: a cabbage leaf stuffed with a mixture of rice and meat, cooked in tomato juice.

In Moldova, sarmale are served for special occasions and are very similar to this last variant. Ground pork is mixed with onions and rice and stuffed in a cabbage leaf, sometimes with the addition of sauerkraut or smoked pork. The resulting bundles are cooked in a tomato-based sauce, with or without dill.

The golubtsy I’ve created here aren’t like any regional version. With their bright and contrasting colors, they take the opposite approach from the washed cabbage, reminiscent of proletarian canteens, that I have too often seen in New York restaurants (for example here and here, if you want me to name names). All the basic ingredients – cabbage leaf, rice, minced meat – are present, but not always where you expect them. And since Ukraine produces goat cheese nowadays, I’m using some to make a sauce that takes us further away from Soviet kitchen clichés.