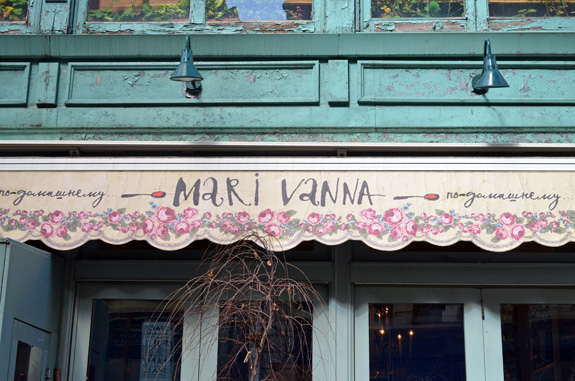 Mari Vanna, open since 2009 in the Flatiron district, is the New York outpost of a small Russian chain that wants to be just like home (po-domashnemu in Russian). Look for other branches in Saint-Petersburg, Moscow, London, Washington D.C., and Los Angeles.

The interior supposedly represents “an archetypal Russian home”, “reminiscent of pre- and post- Soviet Union Russia”, and “the wallpaper peels back to show the generations that have passed”. In my own words, I would say the decor is a kitsch but cute reconstitution of a home of the pre-revolution Russian bourgeoisie. In other words, Burnt by the Sun meets AvroKo. 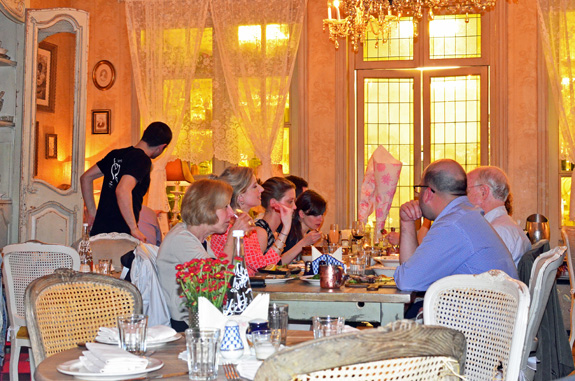 The restaurant reveals on its web site that the name isn’t a moniker for weed, as one might think, but rather comes from some kind of Russian legend nobody’s heard of:

Once upon a time in Moscow & St. Petersburg, a mythical woman named Mari Vanna welcomed diners into her home with open arms, feeding them traditional Russian fare on her finest china and linens.

Foodwise, the menu reads like a compendium of Russian classics: the blinis, the cured meats, the smoked fish, the pickled vegetables, the soups, the dumplings, the pirozhki, the potatoes, the cutlets, the napoleon — they’re all here. There’s also a caviar menu for high-rollers. 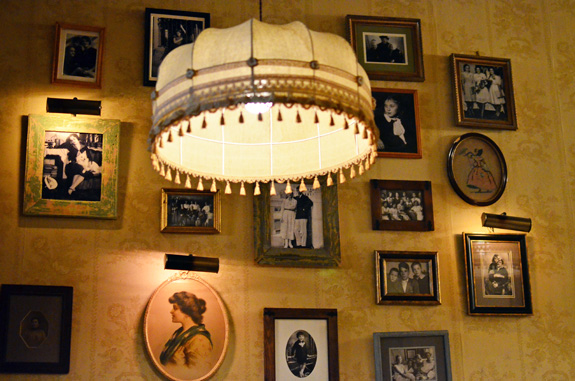 Every table gets a board of walnut-cranberry and whole wheat breads, with regular and dill butters, plus some scallions and radishes. All pretty good. 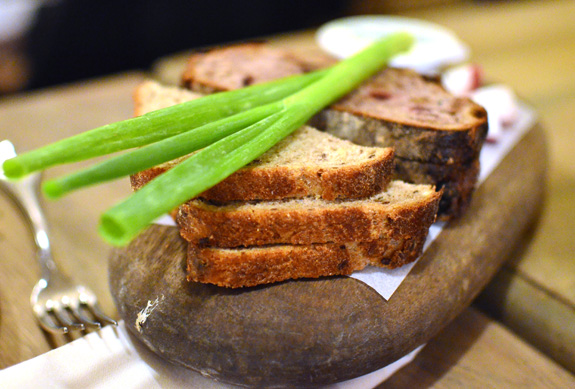 The salad Olivier, available with either chicken or gross-sounding bologna, consisted of nice little dice of meat and vegetables bound by mayo that was probably bough in gallon tubs. It tasted OK, but again was very far from what it could be with a little effort. 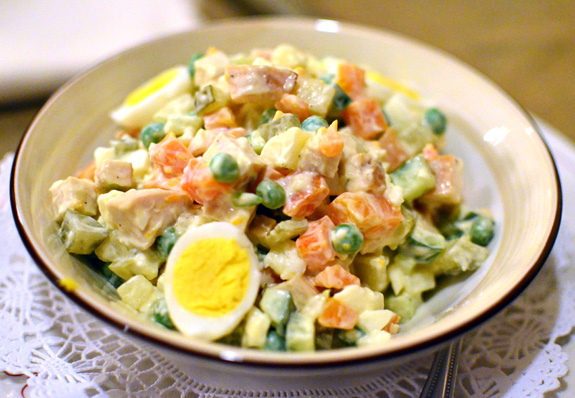 The homemade eggplant caviar packed chunks of eggplant and pepper in a square ring mold, with toasted bread on the side. The mixture was pleasant, but it contained too much herb (cilantro and micro-greens), and lacked salt. It also didn’t need to be served that cold. 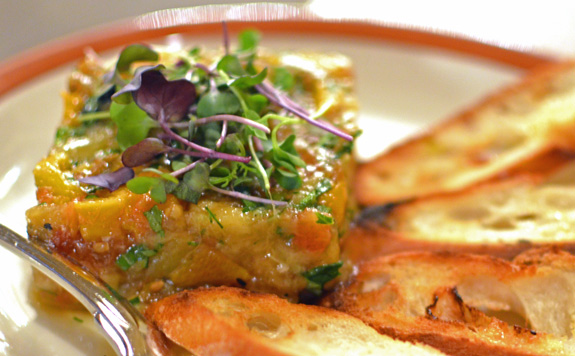 The salo plate, served with black bread and Russian mustard, featured three kinds of fat: plain, black pepper, and paprika, all very good if a bit salty. They also contained a little bit of lean meat (20% at most), which was better than just plain fat. 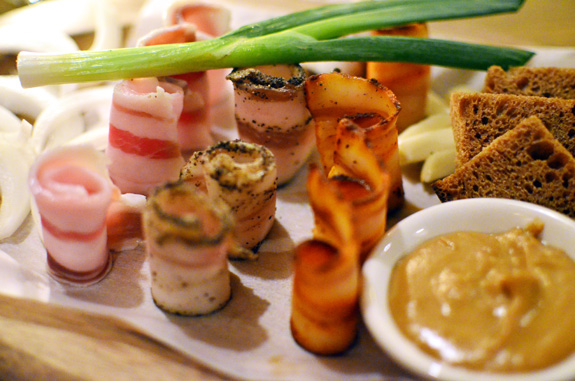 The pirozhki came in three kinds as well: one with a compact mixture of pulled meat that was a bit dry, one with some very tasty sautéed cabbage, and one with a good potato filling with dill and scallions. The dough, a dryer version of a brioche, was fine, as well. 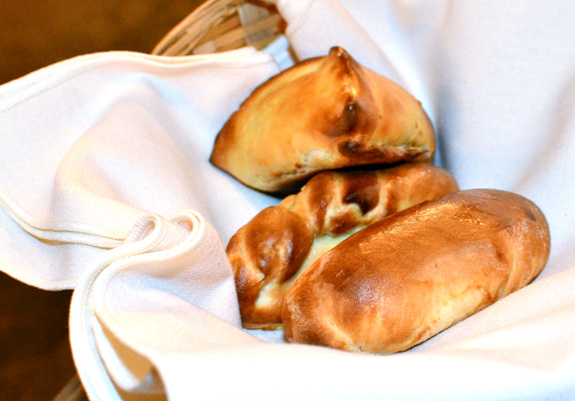 The khachapuri wasn’t your typical Georgian cheese bread. It was a long oval shape, open-faced, and brushed with beaten egg on top. While the dough wasn’t very bread-like, the cheese (a mixture of mozzarella and feta) was quite flavorful and airy. 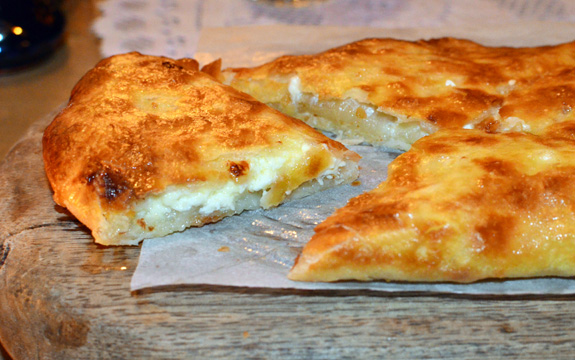 Moving on to the main dishes, the veal pelmeni, served with a bit of butter or with broth, looked homemade and tasted very good, with the right amount of juice inside. 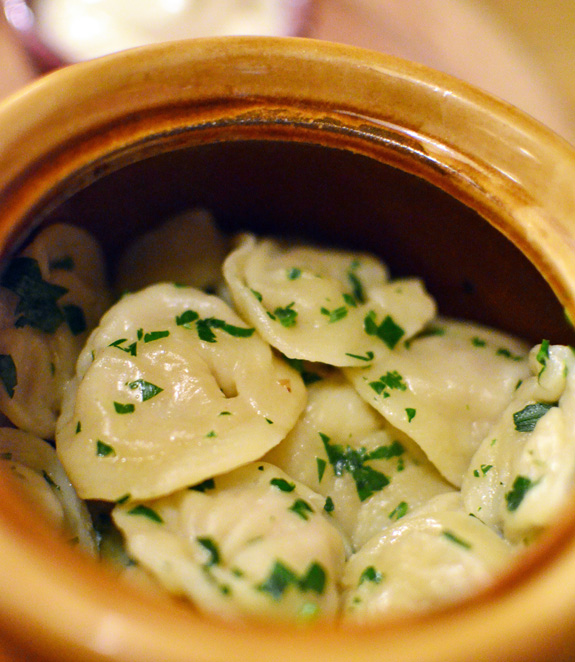 The stuffed peppers, served in their cooking broth, were pretty good, as well, but with a few problems. The juicy filling contained meat and tarragon, but no rice, which made it a bit compact. The dish also lacked salt. 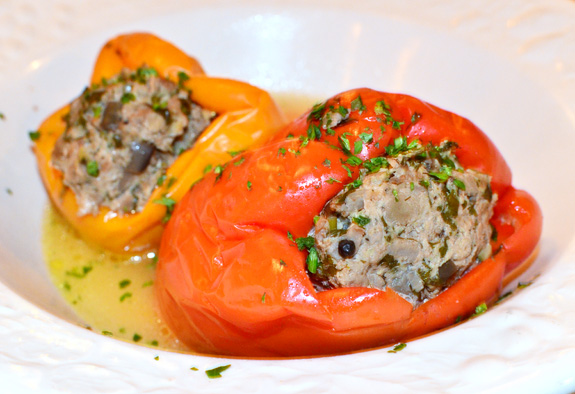 The chicken kotletki were more successful, as they managed to be airy and not dry at all — I’d wager that the white meat was blended with bread and milk. While the herb and radish salad on the side was a great idea, the mashed potatoes were very plain and also lacked salt. 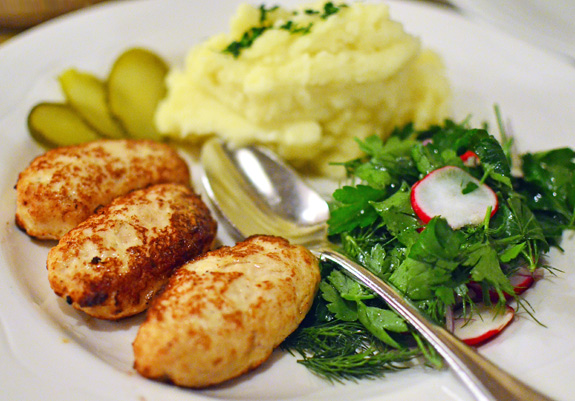 The golubtsy, served in broth without the usual tomato sauce, tasted of onion and carrot (and cabbage, of course), but the meat filling was again some kind of cooked and shredded meat that ended up dry and too compact. And they were probably cooked too long. 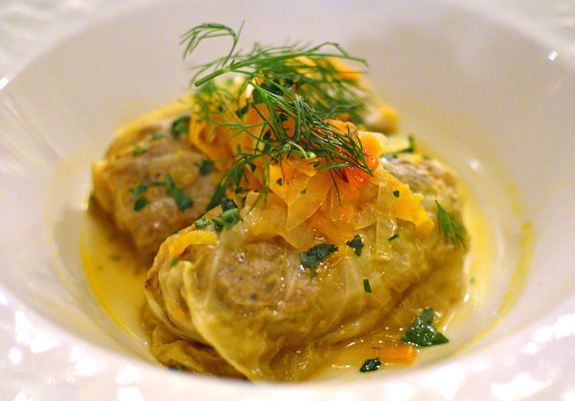 The menu boasts a commendable list of desserts that are both Russian and homemade. The hungriest diners can order a stack of 20 delicious blinis with assorted jams and other sweet toppings. The other desserts are more reasonably sized.

The plombir was a rich and creamy ice cream topped with rasberries and served with raspberry preserves. Even though I think they use vanillin in the ice cream (it’s a little bit like tasting a very simple and boring vanilla flavor) and the preserves were a touch too sweet, the whole was very satisfying. 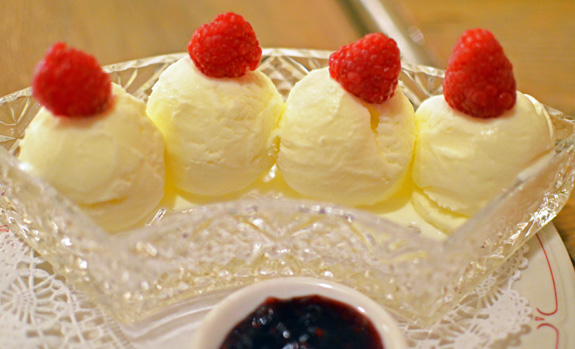 The strawberry smetannik was made of layers of sponge cake and layers of cream (something like a very rich yogurt), one of them with mint. The dessert wasn’t overly sweet, which was refreshing. But unfortunately the strawberries had next to no taste. 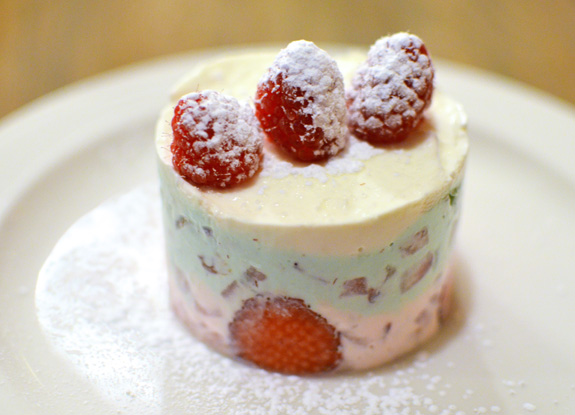 The syrniki, succulent little tvorog pancakes made to order, were served with condensed sweetened milk, blueberry preserves, and sour cream. This dish too can get a bit sweet with the preserves and milk, but the sour cream helps bring some balance. 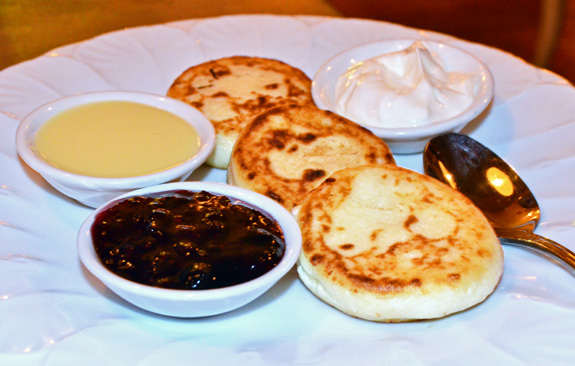 There were also a number of homemade non-alcoholic beverages worth trying. The sour cherry juice boasted a great cherry taste although I would have thought it was made from sweet cherries. The rhubarb compot, with various berries, was excellent and not too-too sweet. The mors was equally good; slightly acidic and again not too sweet.

On the other hand, we were each given a free shot of horseradish-honey vodka, and it was disgusting as usual. Russian restaurants should really stop doing that. If you want to give someone a free shot of vodka, please, PLEASE don’t put horseradish in it!

I’ve been to Mari Vanna several times over the years, and I don’t know whether it’s my memory or a change in the kitchen staff, but I found that the food I ate for this review was much better than I remembered from previous visits. It’s all very classic and there are some flaws (the ground meat stuffings, the salt and sugar levels, to name a few), but you can eat pretty well. The dishes are also nicely presented and the service is rather good — it’s not Brighton Beach. Just know that this is also reflected in the prices. In addition to the food and atmosphere, you’re paying for the privilege of not leaving Manhattan.

I’m Back from Moldova and Ukraine

However once dust has settled and food had to become the draw they found it a bit tougher going.

Variability – exactly what you mentioned – is the issue. Food varies from alright to down right poor if you visit with a few months in between. Reason-change of staff. Management across the chain seems to struggle with maintaining the standards. And with dull and unoriginal food at THESE prices the future is bleak. Alas

[…] may also remember my mention of the herb salad that was served as a side at Mari Vanna. I thought this was a good concept, and came up with my own […]