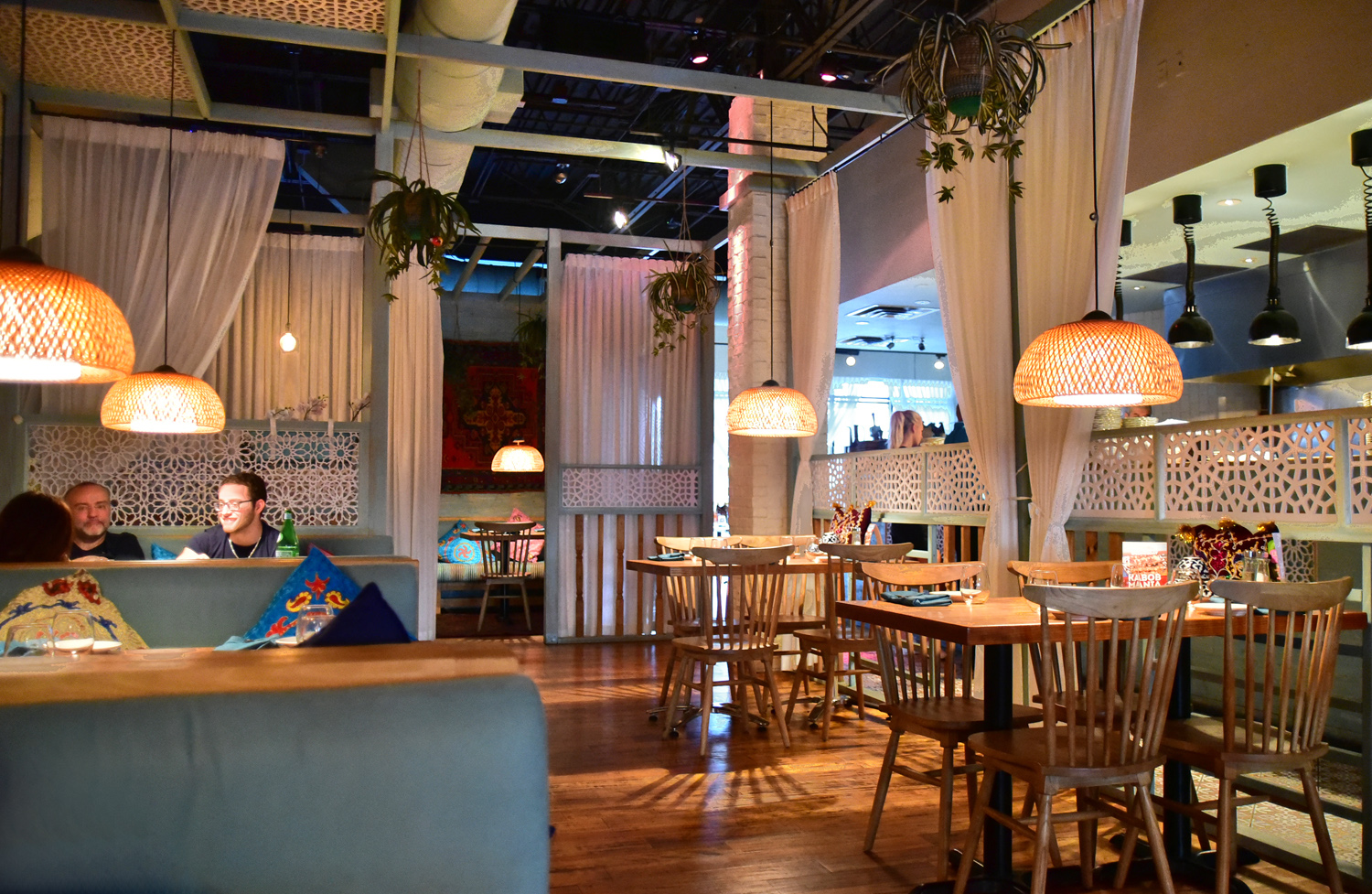 Located in the middle of a strip mall in North Miami Beach, Bahor must seem like a UFO to most locals. Save for emigrants from the post-Soviet space, how many Floridians have ever heard of Georgia (the country) and Uzbekistan (also a country)? In a state where seafood and fresh produce abound yet regional cuisine rarely goes beyond fried food and key lime pie, who might be interested in eating such strange dishes as lagman, plov, and manty? Who would pick a kazan kebab over Duffy’s Sports Grill (“we don’t limit happy to an hour”), or a khachapuri over a pizza at one of the two joints located in the same complex?

Well, nobody. At least not anymore. I have just discovered that, for the second time since the inception of this blog, I will be reviewing a restaurant that has already closed! Apparently, Bahor shuttered just a few days ago, not because of complete incomprehension from prospective patrons, but because the strip mall owners have decided to evict a few tenants in order to redevelop. Do the Miami suburbs really need another set of condos more than they need to expand their gastronomical horizons? When we visited the restaurant on a Saturday evening, it was actually pretty crowded, with a mix of Russian-speaking and non-Russian-speaking people, maybe attracted by decor that managed to make one forget one was eating in the concrete desert of a suburban American strip mall. Let’s go back in time…

The dining room uses carpets and textiles to add successful Uzbek accents to furniture that would otherwise remind me of the kitchen table and chairs I bought when I got my first apartment, which I associate more with fond memories than good looks. The open kitchen lets you catch a glimpse of the Russian-speaking cooks manning the wood-fire oven, mangal (coal barbecue for the kebabs), and the more conventional stoves. And there’s even an outdoor area facing a waterway, where one can smoke the hookah. 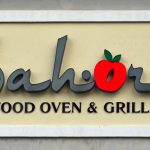 Bahor’s menu features Russian, Georgian, and Uzbek dishes, giving you an assortment of the best cuisines the Soviet Union had to offer. Beef tongue with horseradish competes with walnut-filled eggplant rolls and chebureks in the appetizers, and borscht meets lagman in the soup section. Among the mains, beef Stroganoff appears next to chicken Tabaka and plov (called pilaf on the menu), and you can choose between a Georgian khachapuri and an Uzbek non from the baked goods. The salad and grill sections reconcile everyone with cross-cultural kebabs and mixes of tomatoes, cucumbers, and peppers. Finally, desserts include Russian napoleon and medovik, as well as the more oriental pakhlava. 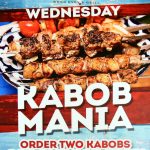 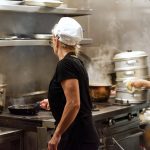 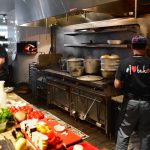 Let’s start with some Georgian dishes. The walnut-stuffed eggplant rolls are unusually large. The light filling consists of a very finely ground mix of walnut, cilantro, garlic, pomegranate seeds and spices. This dish would be really good if it were less salty. The Adjaran khachapuri is off to a bad start: it comes without butter on top, and the egg in the middle is overcooked! Still, the dough is very airy and the cheese — homemade, according to the menu — gets points for taste and texture (though it could use a bit more salt). I would give it a second chance. The Imeretian khachapuri is also good but not the best. There’s definitely too much bread, probably because of the way the dough was folded over the cheese, with considerably more dough at the bottom and near the center. But the khachapuri is baked properly, and the cheese, which seems to be slightly different from the cheeseboat above but still of the sulguni kind, is satisfying. 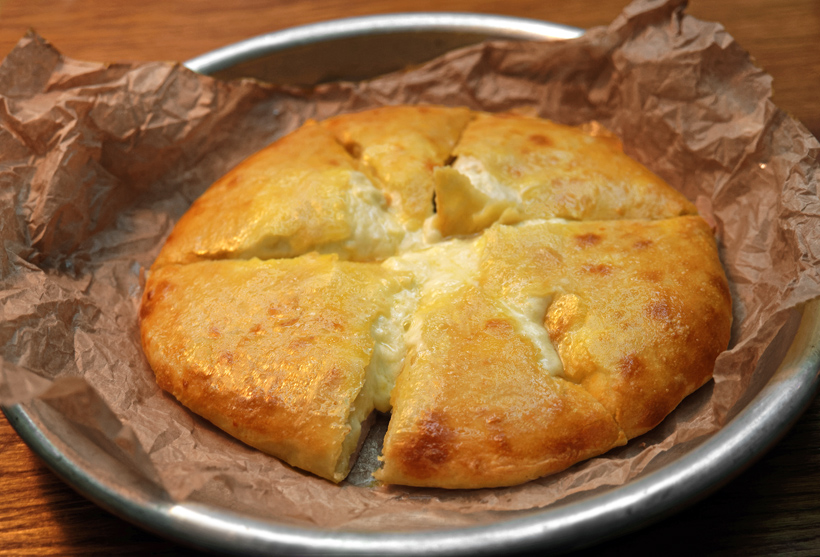 The small meat chebureks take us closer to Central Asia. The fried dough, rolled thin, is very crispy and not too greasy. It’s filled with the perfect amount of meat, a juicy little patty (the menu says beef, but it could have been lamb), and sprinkled with a little bit of dill. The sauce on the side is the usual kebab sauce, a kind of thin tomato sauce with herbs (cilantro, parsley, dill). Very good! 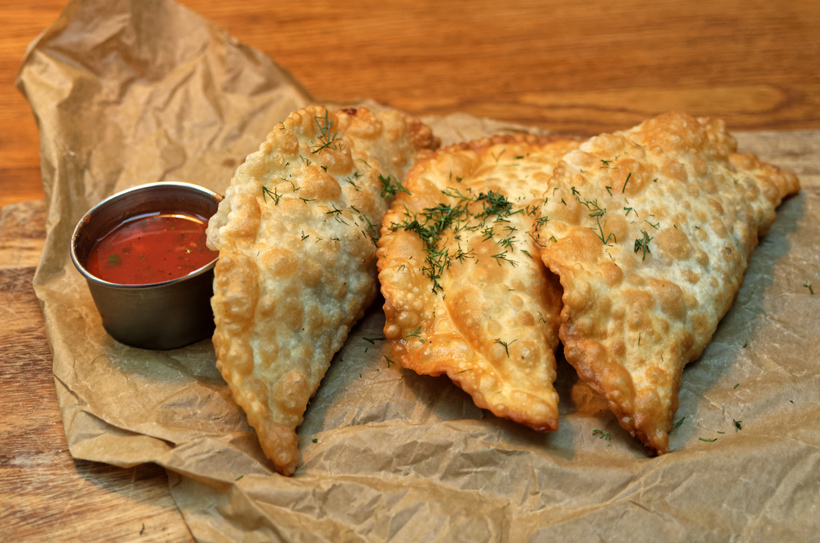 The lagman, loaded with vegetables, meat and noodles, is almost a cross between a soup and stew. The broth is very red and slightly spicy, and I see a lot of red peppers, together with tomatoes, celery, green beans, garlic, a few tiny pieces of meat (lamb, very tender), and some dill on top. The homemade thick noodles are very soft. Altogether, this is an excellent lagman. If you like yours with just a little more heat, there’s a small cup of lozy sauce that looks like a very spicy mix of red chili peppers with oil but tastes somewhat milder than you’d think. 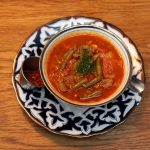 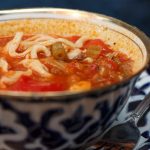 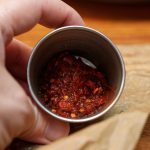 The manty are described as “homemade steamed dumplings” with “finely sliced lamb meat with onion and traditional spices in a thinnest dough.” In practice, the dough’s very soft but not always the thinnest, especially in the folds. The meat is very flavorful, but it’s stuck together in a ball that’s a bit too compact. I don’t think I taste cumin or coriander, and that’s fine — even if these are Uzbekistan’s most typical spices, they don’t have to appear in every single dish! Instead, the dumplings are topped with finely chopped dill (again) and black pepper.There’s also some cooking broth on the serving plate, and a small cup of matsoni yogurt. Uzbekistan excels at making kebabs, and Bahor offers half a dozen types. The small skewers are served with parsley, very thinly sliced onion, and the same kebab sauce as the chebureks. The very tender chicken kebab is prepared with marinated chicken breasts (though they looked more like thighs to me), and boasts that grilled flavor one would expect from a good kebab. The lyulya-kebab tastes equally great. I like the spice blend used for the seasoning. My one criticism is that the ground lamb is unevenly tender. Kazan kebab normally consists of meat cooked in a kazan (the large cooking pot used throughout Central Asia). This Uzbek specialty has a bit of a misnomer, since it’s neither skewered nor roasted. Bahor’s rendition doesn’t look like any other kazan kebab I’ve seen. It includes two kinds of lamb cuts: chops that are very, very dry and overcooked; and meat cubes that are slightly less dry simply because they’re larger. Even the kebab sauce on the side doesn’t really help. But if you can somehow get past the major doneness problem, the meat is pleasantly seasoned, contains just the right amount of fat, and actually tastes good. It’s served with flavorful potatoes that seem to have cooked in the meat juices, back when there were some. The remaining vegetable side takes the form of fresh cucumbers and tomatoes, thick slices of raw onion, and hunks of parsley. 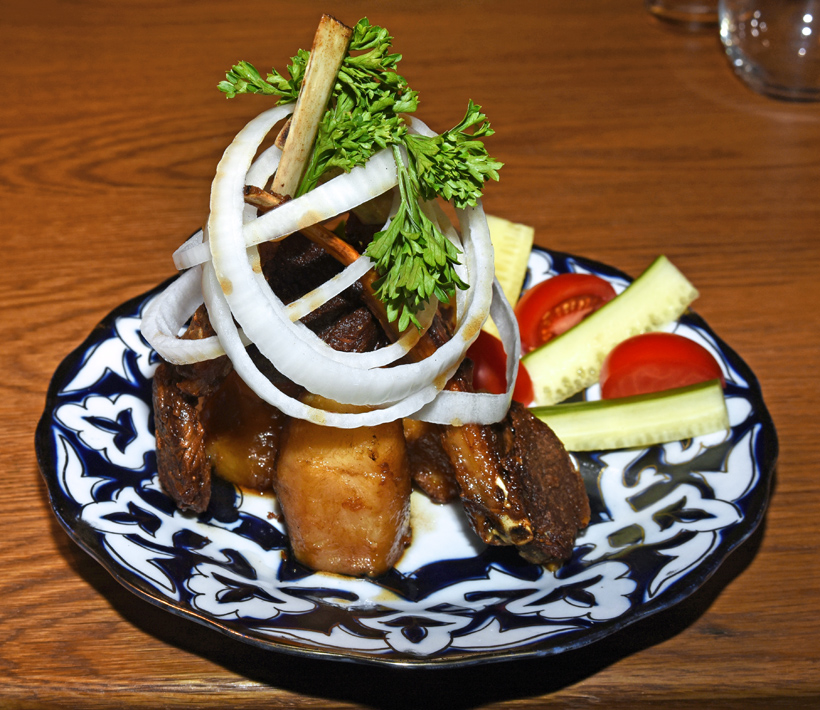 The plov is advertised as “famous Ferghana pilaf with rice, lamb meat, onions and carrots with flavorful traditional spices and berberries.” Well, there’s carrots, wild cumin, chickpeas, and golden raisins, but I’m not so sure about the onions. With the raisins and carrots, it’s quite sweet. And it’s too salty. And there’s too much cumin. And the rice is undercooked. So yeah, there are a few execution problems, which sucks for such an iconic dish. The lamb comes as somewhat dry slices of a roast served on top of the rice, as opposed to the usual meat cubes mixed in. This could have been a good idea if the meat weren’t overcooked. Strangely enough, there’s a whole tomato resting on the side of the plate. I’ve seen plov served with the classic salad of onion, cucumbers, and tomatoes on the same plate, probably to constitute a whole meal, but a plain tomato doesn’t qualify as a salad. As a matter of fact, the picture of the plov on their web site shows a real salad! For dessert, the pakhlava is prepared in the Uzbek style, with a filling of walnuts between three layers of thick dough. It must have been freshly made because it’s very moist. I see syrup on top, together with the powdered sugar, and I think it tastes like honey (as opposed to plain sugar syrup). I’m quite happy with it. 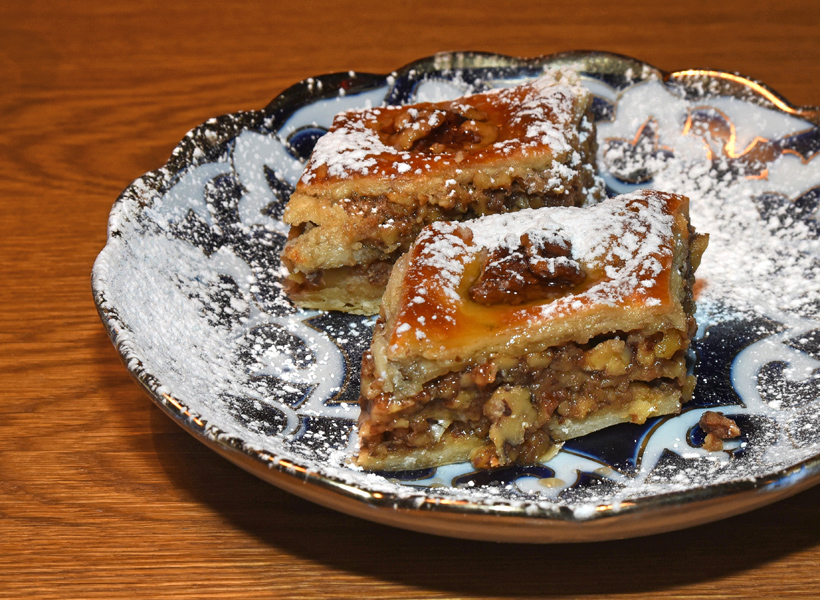 On the beverage front, Bahor boasts a full bar but only a couple of Russian vodkas and Georgian red wines. On the other hand, if you think that the best pairing for Uzbek food is Dom Perignon, they got you covered. Non alcoholic beverages include a kompot, possibly made with seasonal fruits since it tasted quite different on different visits (I would guess apple-apricot the first time, and apple-cherry-raisin the second time).

Service is (was) efficient and pretty fast, and I believe all the waiters spoke both Russian and English. Although I don’t give numerical ratings to restaurants outside of New York City — and especially not to ones that have closed — I would put Bahor just a hair below Uma’s in NYC. Overall good food, but looking at the pictures on their web site, I suspect that the quality slightly drifted over time. Maybe the restaurateurs will find a new space and reboot the concept in all its original glory. Maybe you can get a new kitchen table at North Miami Beach’s next restaurant supply auction. Stay tuned!