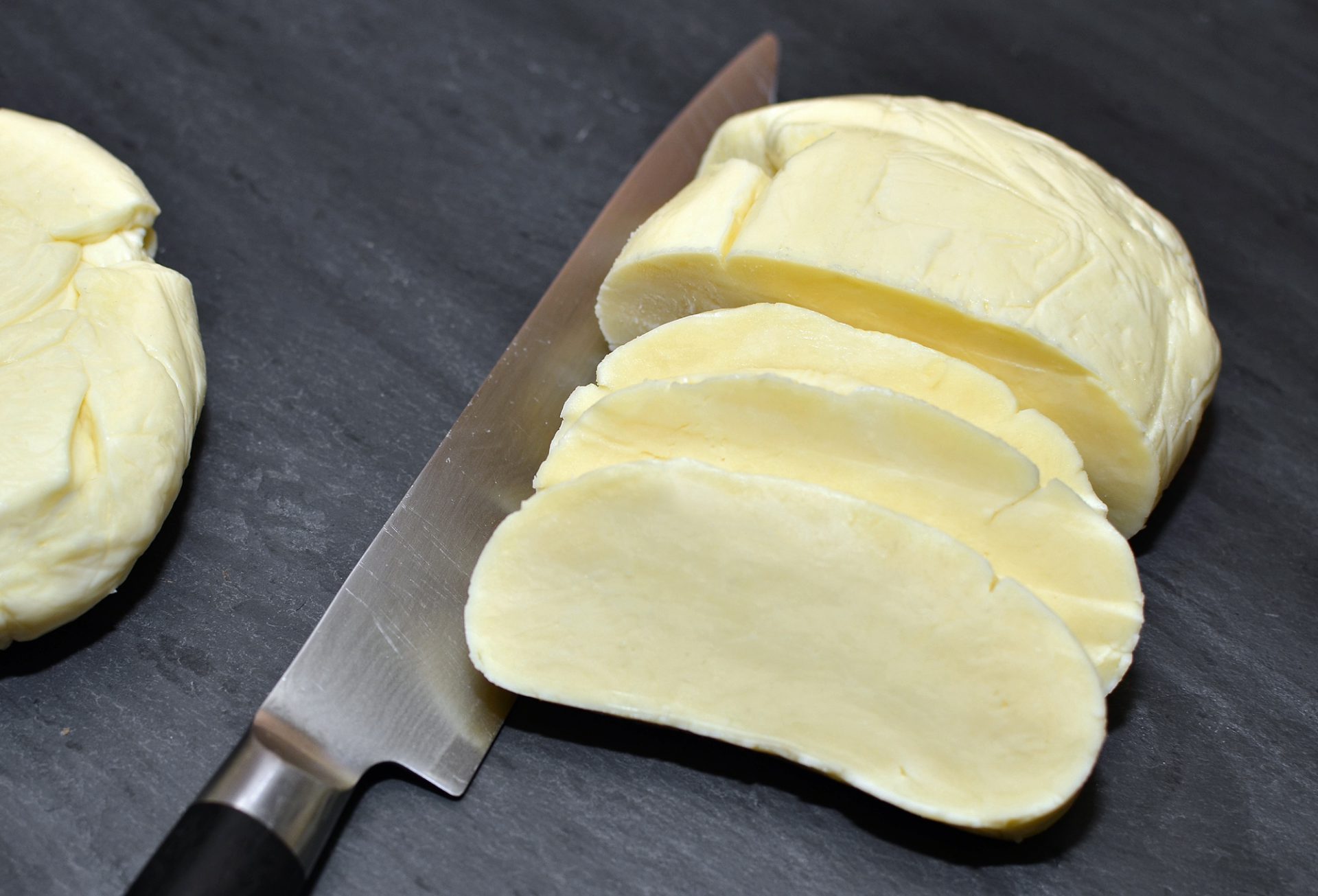 So you’ve made your 10 pounds of Imeretian cheese and you’ve been eating grape and cheese salad for the past two weeks. You’re starting to regret letting me enroll you in that slow food movement. Here’s a half-baked solution: make sulguni! Why half-baked? Because it will shrink your cheese supply by half!

Like mozzarella, sulguni is a stretched-curd cheese — the technique employed in making it is called pasta filata in Italian. However, the result has a firmer texture than mozzarella, closer to Polly-O than the real Italian stuff. At least, this is the version I’ve encountered most of the time, but I know that several variations exist.

Sulguni is now protected by a geographical indication in Georgia. You can find all the nitty-gritty details here. In brief, there are 3 separate registrations that seem to differ mostly in cheese-shape and region of production: regular Sulguni, Megruli Sulguni (produced in Mingrelia), and Svanuri Sulguni (produced in Svaneti). Some of the specifications are just plain entertaining: “the smell is pleasant, typical for such kind of cheese”, “the taste is pure, typical for the cultured milk product” — now that’s some strict quality control! There’s some more interesting information too. For example, the milk can come from cows, goats, or buffaloes. The production method is explained as follows:

The milk fermentation takes place at the temperature of 30-35°C. Received “Delamo” (product received from milk by enzyme) is cut and heated for the second time to the temperature of 34-37°C, the 70-80% of lactoserum is removed from it, the uniform mass is made from the cheese granules and is left for ripening to 140-150°T for “cheddarization” (method for making such kind of cheese).

The ripe cheese is cut into thin layers, is placed in water of 75-80°C and is stirred until it becomes uniformly stretching paste mass, then, it is taken from the lactoserum. The mass is cut into the preferred sizes from which the balls are made to receive the admissible form, is placed in the forms, cooled and shaped sulguni is placed in the brine, with concentration of 17-18%, at the temperature of 8-12°C. The cheese realization is permitted after 24 hours.

My recipe is inspired by Tinatin Mjavanadze’s Georgia with Taste, as well as one from Milk’s Leap to a lesser extent. It may not appear so at first, but it’s quite similar to what’s described above, minus the final brining.

Sulguni melts very well, hence its use in several Georgian dishes, such as elardji (where it’s mixed with polenta) and many khachapuri recipes. As it originates in Mingrelia, it would go naturally on top of a Mingrelian khachapuri, while the cheese mixture inside would be Imeretian.

Finally, since sulguni is sometimes smoked, I’d like to seize the opportunity to use my latest kitchen toy, the Smoking Gun. Please do not comment on this post to lament that you live in Georgia and have never seen anyone use a smoking gun other than when the mafia’s settling scores. I understand that this isn’t the most orthodox way to make smoked sulguni. But it’s fun, quick, and effective!

[…] own cheese, which took yet more time to perfect; I’ve posted my takes on Imeretian cheese and sulguni […]

It’s a very good recipe, I tried it but the cheese did not become stretchy, what do you think I did wrong?

I had bad luck trying reproduce Suluguni here in .au – it would not melt. Might try your recipe. Once imeretinski cheese is ready how long you have to wait before melting it?

Hi Victor, I haven’t played with timings a lot, but I can tell you what worked for me. I let the Imeretian cheese rest 2 days before starting the sulguni. Then, as indicated in the recipe, I cut it into slices and let it warm in the whey at 74 C / 165 F for 30 seconds to 1 minute. The temperature of the whey is very important here. 74 C is quite hot, too hot to work with bare hands, hence the latex gloves.

Thanks Florian! Stupid question – for those two resting days, do you keep Imeretian in the fridge? What about the whey?