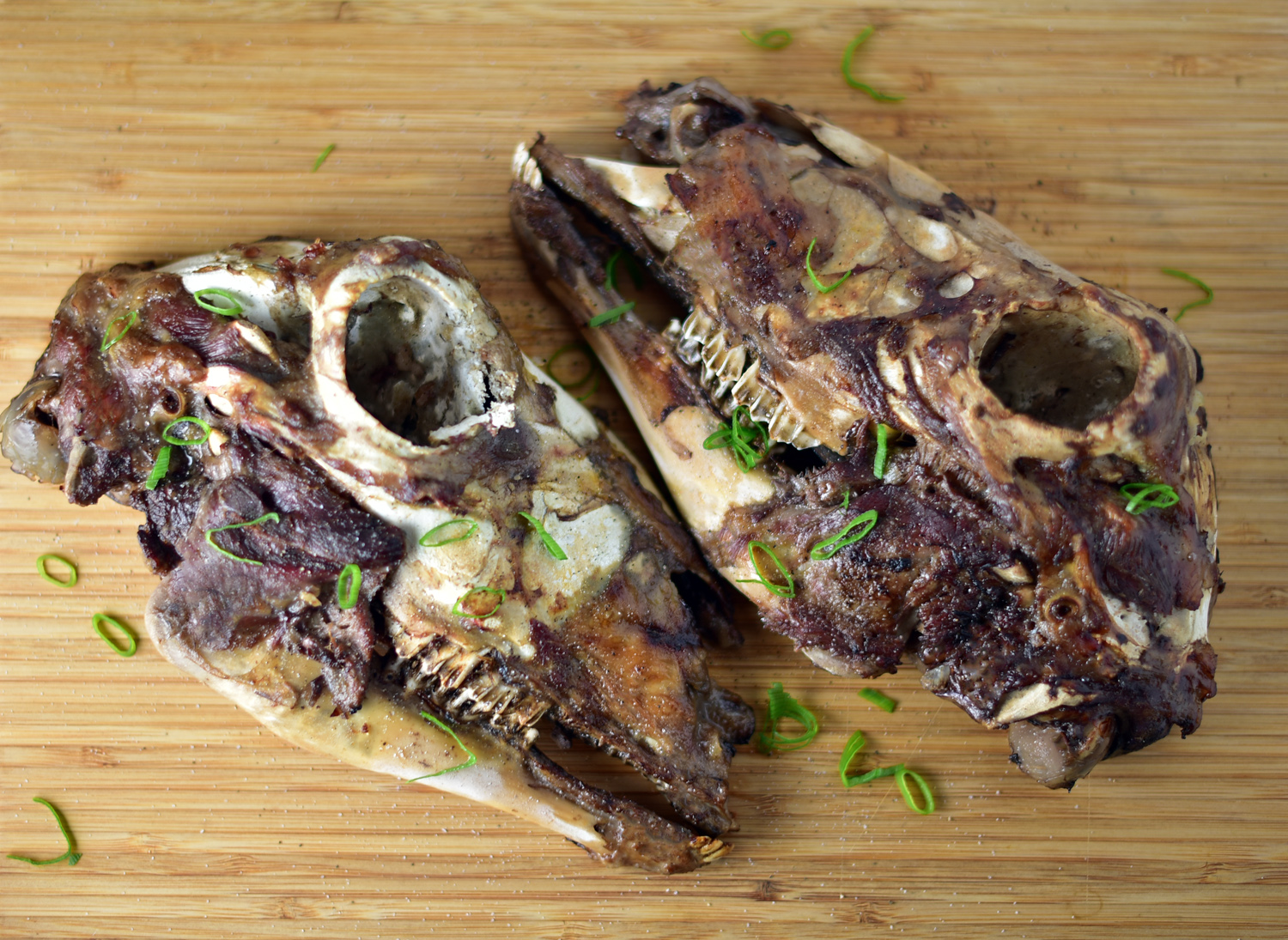 When I published my beshbarmak recipe, I promised that I would soon write another post about its indispensable complement on any successful Kazakh festive dinner table: a boiled sheep’s head, to be served to the most honored guest. Well, even after several attempts at perfecting the unlikely delicacy, I must say that I still find this to be a dubious honor.

Firstly, there’s really not a whole lot to eat on a sheep’s head. This is even more true in the US, where the heads (which are lamb’s heads, really) are sold without the skin — compare my pictures below to the dish I tried in an Astana restaurant here. Not that I think the skin should be eaten, mind you, but at least it hides the fact that the only substantial edible pieces are the tongue, a couple spoonfuls of meat from the cheeks, and of course the eyes and brain.

Then there’s the preparation: boiled, served cold. Can this be any more boring? I did try to make it more exciting by finishing the head under the broiler, and while in my case this technique achieved next to nothing (other than drying out the meat), I can imagine that with the skin on, one might get a more interesting, crispy result. It’s a solution that might even satisfy tradition nazis; since the head is traditionally boiled in a kazan, and any self-respecting traditional kazan should be heated over a wood fire, all you have to do is take the head out of the cauldron and broil it directly over the flames.

Finally, the typical decoration consists of a few slices of raw onion more or less artistically arranged upon the head. While this normally looks ridiculous, by using some of the vegetables from the head’s cooking stock, I managed to achieve an even more grotesque result, somewhat reminiscent of Leatherface’s mask in The Texas Chainsaw Massacre. Maybe I should just rename my recipe in tribute to the late Gunnar Hansen. After all, in his native Iceland, sheep’s head is quite popular — it’s called Svið. 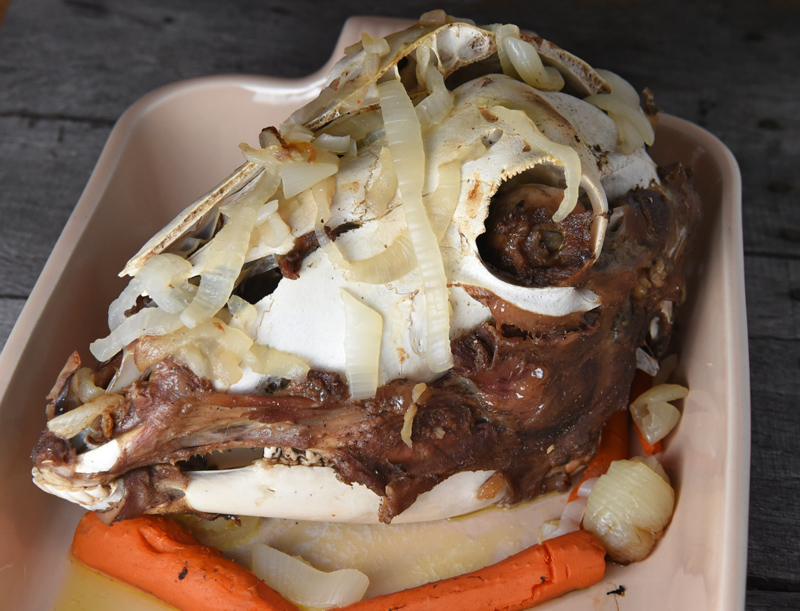 In other words, I’m not crazy about sheep’s head, and I can’t say it’s really worth the effort to prepare at home. The meat can be quite good, but there’s just way too little of it — buy a veal’s head instead! If it’s the taste of lamb you really like, buy lamb shanks! The brains are the only part that I really care for, and there again you’d be better off getting brains from a larger animal (pork brains being the easiest to procure; check out my recipes here, here and here).

Still, for the true die-hard nose-to-tail advocates, the recipe below isn’t bad. In fact, I’d claim it’s at least as good as the sheep’s head I ate in Kazakhstan. It’s served hot, not cold, and the meat is cooked in a pressure cooker for maximum tenderness, after being briefly boiled in water first to remove impurities. And the brains on toast, a variation on the classic French cervelle meunière, are quite nice! I’d almost recommend leaving the head to your local butcher, and buying only the brains to serve alongside your beshbarmak. Your most honored guest will thank you! 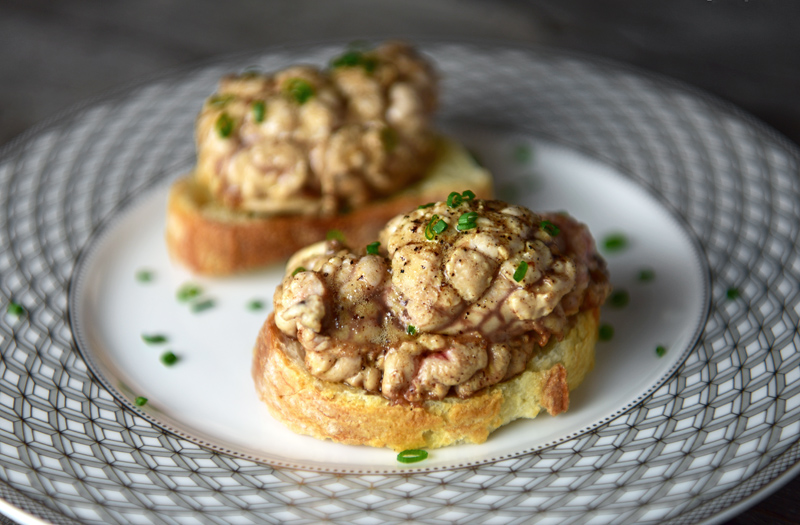 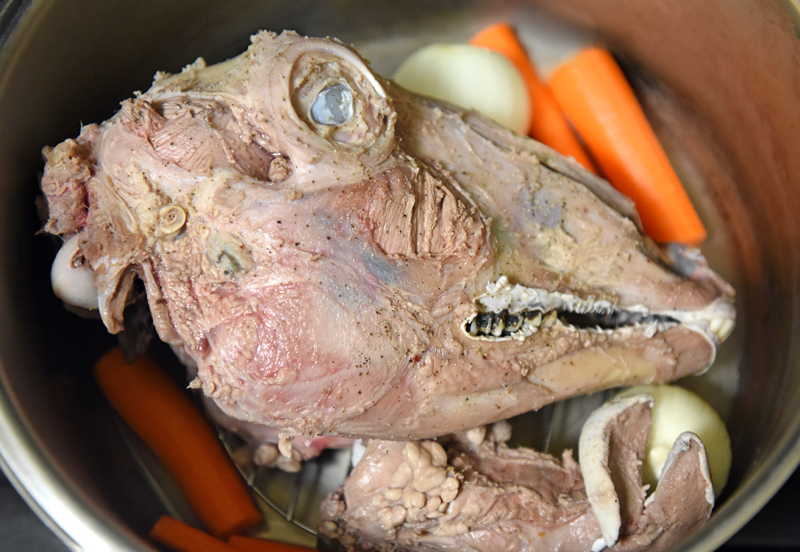 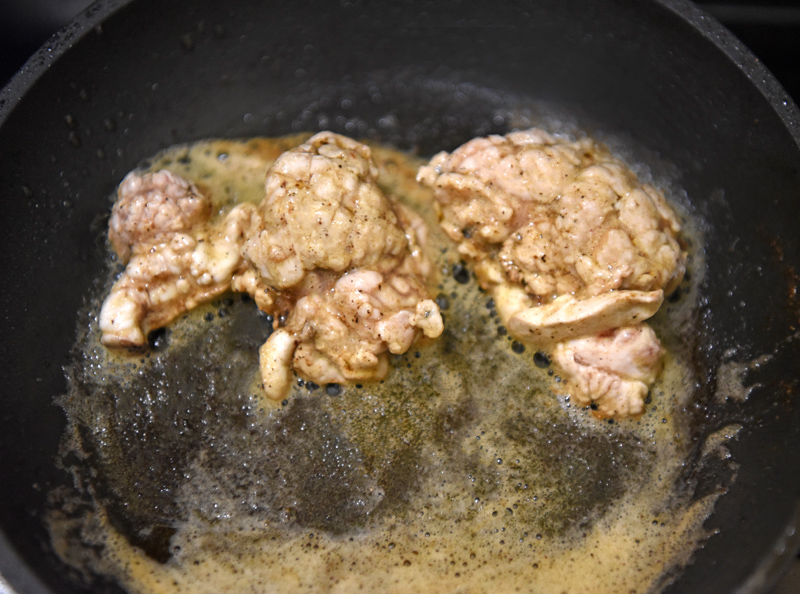