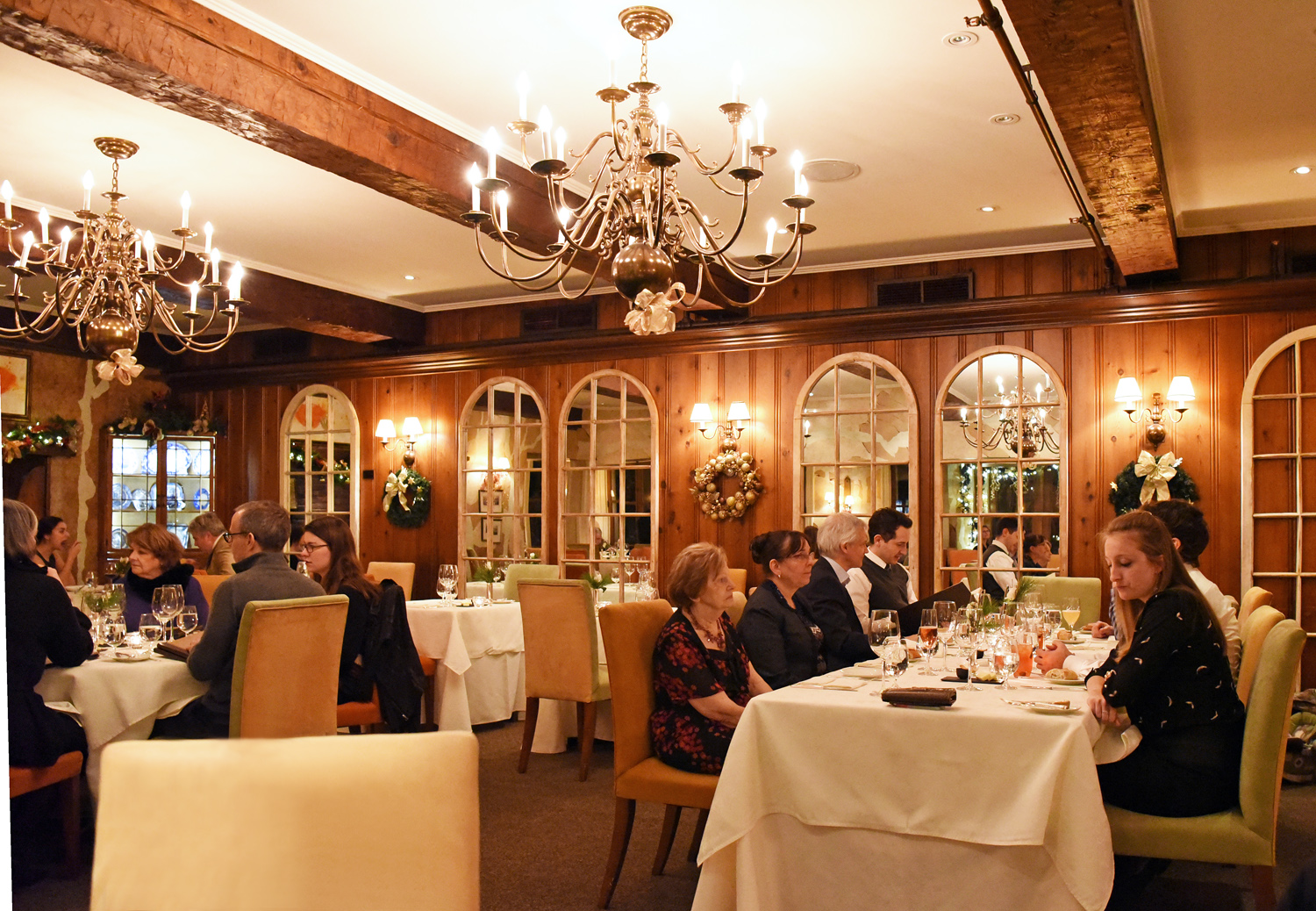 Quebec is particularly well-suited for Red Alerts. First, the latitude and climate aren’t that different from those of many places in Eastern Europe, which means that at least some of the flora and fauna are similar — you’ll find a lot more berries and salmon than tropical fruits and red snapper. Then there’s the fact that you tend to eat quite well there. I’ve already posted once about a restaurant in Montreal, and quality eateries can be found throughout the province (its inhabited parts, that is). Unlike America where, outside of large cities, too many joints can barely reheat the frozen food they bought in from their favorite distributor or properly execute a recipe from Cooking 101, Quebec’s chefs tend to turn out great dishes, simple or elaborate, made with fresh local products. Such as at Manoir Hovey in the Eastern Townships, and its award-winning restaurant, Le Hatley. 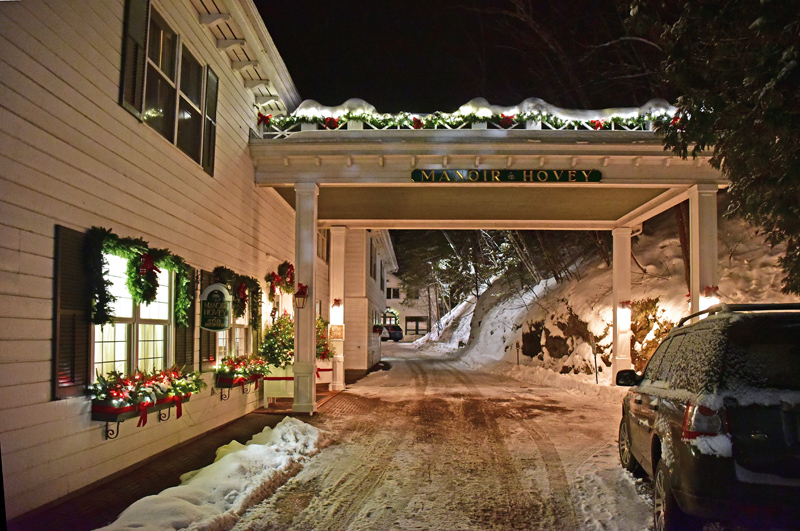 Of course Manoir Hovey isn’t exactly your corner restaurant — it’s a 5 star Relais & Chateaux property. I’ll still argue that in its category, it dwarfs many luxury hotels on the other side of the border that insist on serving dishes they can neither spell, nor pronounce, nor cook. But let’s start talking about the food…

Le Hatley offers “a fine Quebec cuisine complemented with a contemporary taste”. The menu counts several fowl and venison dishes, often combined with root vegetables and berries. Not because of any kind of conscious Eastern European influence, but simply because these are the ingredients one finds in the region in winter. Yet, these ingredients do provide some interesting ideas for the eastward-looking cook.

Starting with the amuse-bouche, a goose tartare with beets, truffle cracker, capers, and elederflower syrup. I think it’s the first time I’ve encountered a tartare made from goose, a meat that’s not reputed for its tenderness. Yet it works quite well here; the meat isn’t tough at all and has a recognizable goose / duck taste. I only notice the truffle oil a little bit in the cracker, but it’s probably better that way. There’s a lot of acidity coming from the capers and the pickled beets, and it masks some of the other flavors. I don’t even remember tasting the elderflower. The dish is good, but all in all there’s probably too much going on for a small tartare portion. Sometimes, less is more. 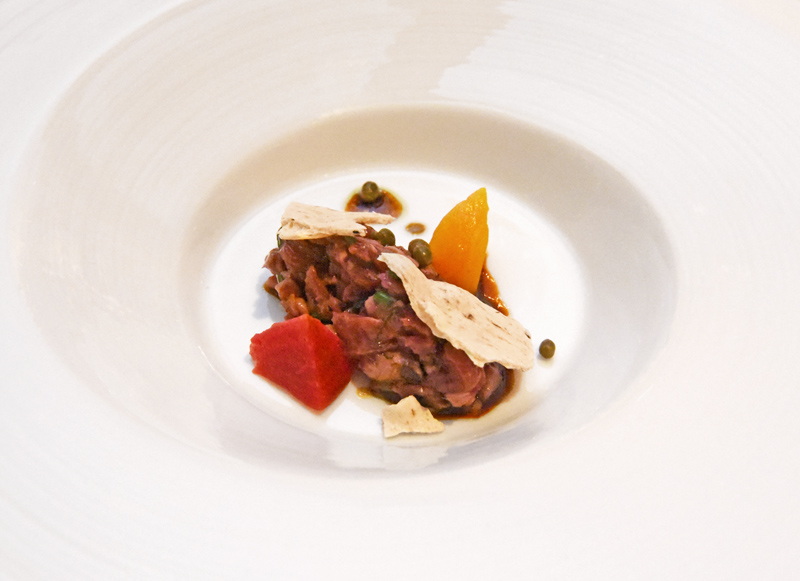 Then comes the beautifully presented venison terrine, served with wild carrot ravigote, marinated parsley root, and sea parsley. The terrine is very good, but there sure are a lot of garnishes for a dish that I think is at its most enjoyable when served with just a few slices of bread. My palate is so distracted, it can barely enjoy the terrine. The root vegetables are very crunchy, which seems intentional but is still a bit much for me. Everything tastes great, but again, a bit less would be better. That, or a thicker slice of terrine. 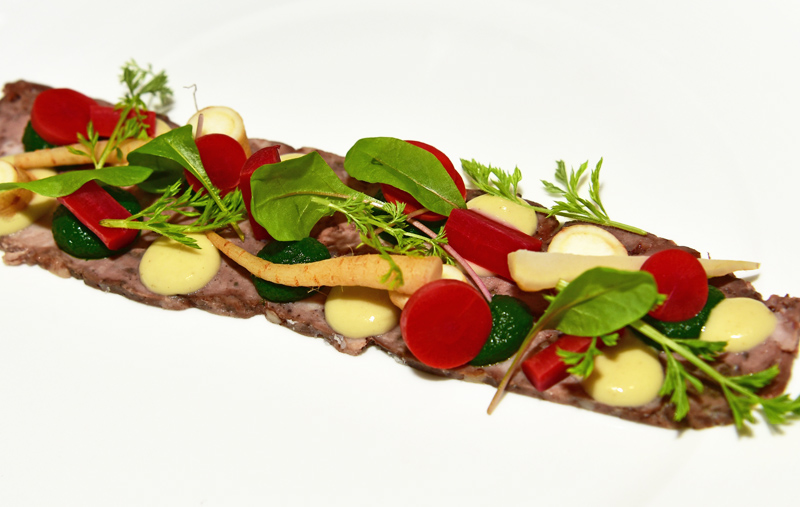 The red deer gigue (leg steak) with apples, wild mushrooms, elderberry, and cabbage combines many of the classic flavors paired with venison. Still, it’s nicely executed, with special attention to textural variety, and I like the charred chunks of cabbage even though I don’t usually eat cabbage all that much. I can’t tell if the splash of sauce on the plate is accidental, or if it’s a new trend trying to steal the Absurd Plating Prize from that trend of packing all the food onto only one half of the plate (example here). 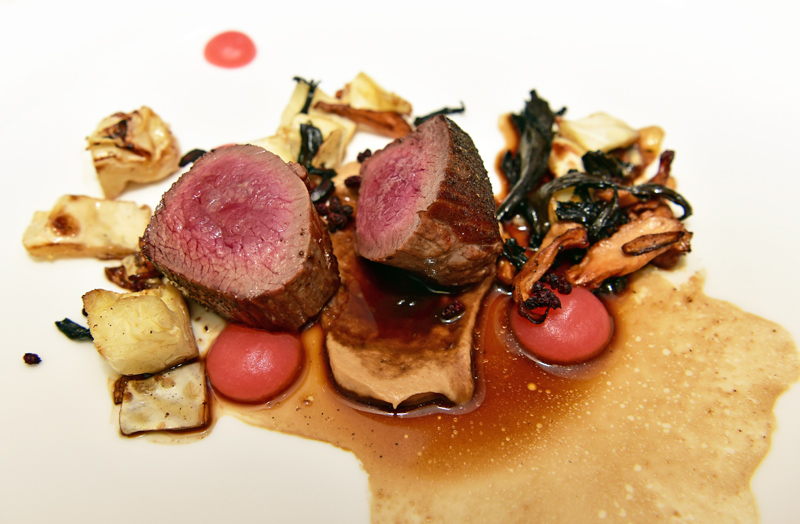 There are other ideas on the menu that sound inspiring: an appetizer of braised pork and spruce ravioli, celery root, kale, hemlock tree needles, and tomato reduction; or the vegetarian main course of creamy buckwheat grits with tarragon, field peas, salsify, and cauliflower. But the dishes that triggered me to write this Red Alert in the first place are really the desserts.

There’s the beet ice cream, with haskap compote, fennel seed Genoa cake, and sweet potato cake. Wherever there’s beet, there’s a Red Alert, never mind that it’s served here with sweet potato, which grows on every continent except Europe. The very unctuous (pacotized?) ice cream has a pronounced beet flavor. The crumble of Genoa cake upon which it rests tastes mainly of fennel, and the chef and I seem to have two very different definitions of Genoa cake. While I’m all for textural contrast, it’s a heck of a lot of crumble for a single scoop of ice cream. The sweet potato cake is very soft and rather excellent, but I’m still not sure it’s such a great flavor match with the beet and fennel. It doesn’t clash, but neither does it wow. The plate is decorated with some kind of red-purple preserves (the haskap, I presume), some green leaves, and edible flowers. The preserves don’t leave much of an impression, which again suggests that there’s too much going on. If you read this blog regularly, you already know what I think of edible flowers, and here they don’t even make the plate look much prettier, just overloaded. But all things considered, there just isn’t enough beet ice cream for a dessert called “Beet Ice Cream” — it’s long gone by the time you finish everything else. 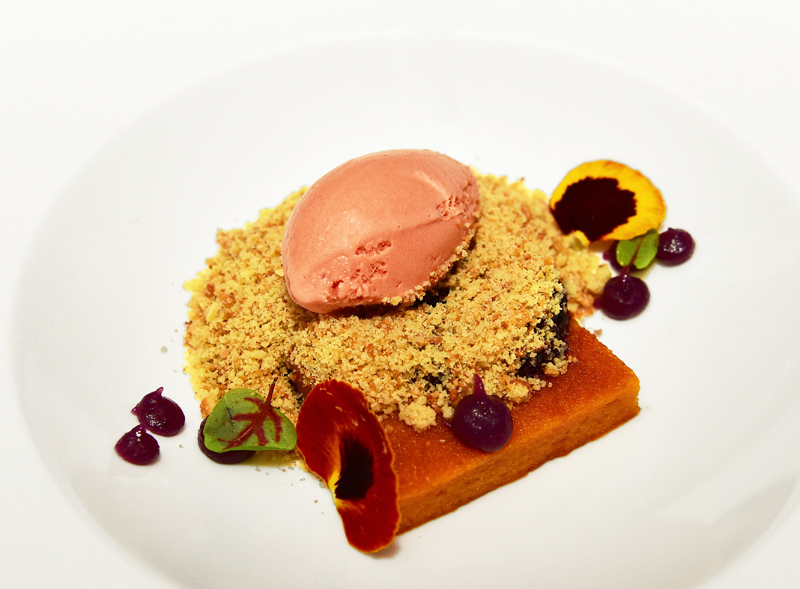 Watch out, maple syrup — Canada is discovering birch syrup! The production is still very confidential (here’s one producer, in Manitoba), so much so that you can probably travel the whole country without ever hearing about it, but as you know, I’ve been a birch syrup enthusiast (check out my recipes here). Le Hatley makes a birch syrup panna cotta, with pistachio crumble, strawberry and sweet-clover gel, and pine meringue. The panna cotta is a great vehicle for birch syrup’s distinctive taste, and the pistachio crumble is more successful (and served in more reasonable amounts) than its cousin in the beet ice cream dish. The many other elements are much harder to identify unless you have the menu in front of you — my notes mention a “meringue kind of cracker”, and “some sort of melted marshmallow purée”. Regardless, the flavors are very harmonious. If I wanted to split hairs, I could say that the dessert might lack a bit of contrast, since everything is sweet (this was true about the previous dessert, as well). 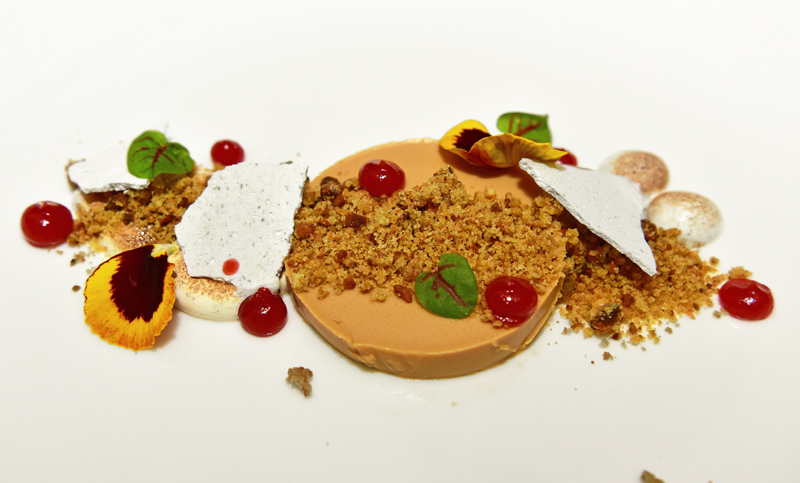 There’s no question that the food at Le Hatley is very good, and it would probably fetch a 9 or so on my rating system. However, the dishes can be slightly overly fiddly. As much as I love complex compositions, sometimes one has to step back and consider whether each element actually brings something to the whole. In particular, when using very unusual ingredients like in the pine meringue, sweet-clover gel, or haskap compote, it would make sense to me to put forward the products in a way that encourages the diners to discover them. Otherwise, you barely know what you’re eating. As it stands, I’m not particularly interested in eating sweet-clover or haskap again, because I still don’t even know what they taste like. And that’s too bad, because apparently haskap is used in Russia to make wine, preserves, and sauces. As for the sweet-clover, can somebody explain to me the connection between what’s on my plate and the images I find on the web? 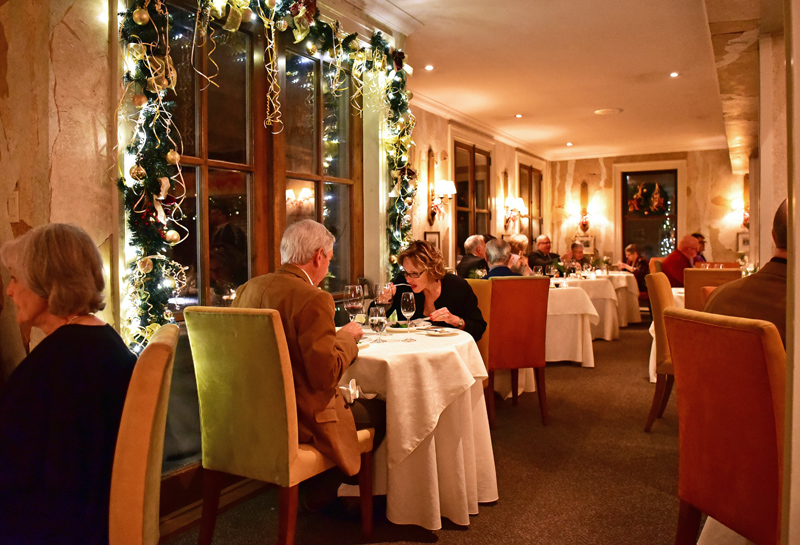