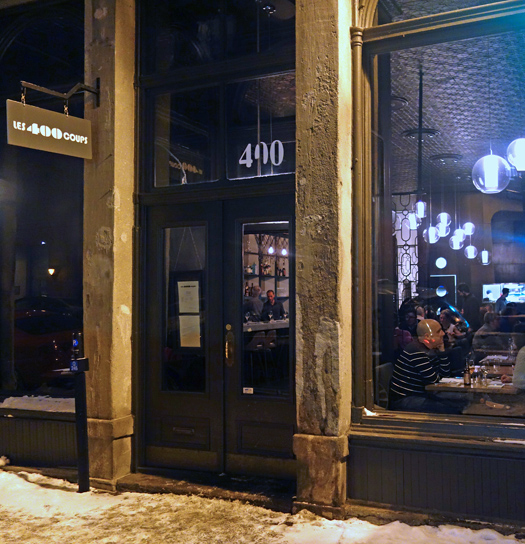 Les 400 Coups, in Old Montreal, is one of Montreal’s best restaurants, and it specializes in local ingredients and seasonal cuisine. Red? Well, maybe this should just be an Orange Alert. None of this food is strictly Eastern European, but a few dishes certainly pinged my radar. They’re inspiring, as they’re made with ingredients typically found in Eastern Europe: trout paired with yogurt and beets, and arctic char served with sea-buckthorn and rye.

It’s been a slow time for bright, commie-red alerts, and it’s rare to see something in a restaurant of this caliber. I guess Daniel Boulud and his fellow three-Michelin-star chefs don’t often wake up thinking, “Let’s put a Beef Stroganoff on the menu today”. Or perhaps it’s just that Thomas Keller doesn’t give me a call when he adds a coulibiac to his tasting prix-fixe. So for now, let’s enjoy some French-Canadian, expertly prepared seafood…

After repasting at M. Wells Steakhouse and watching Anthony Bourdain stuffing his face at Joe Beef or Au Pied de Cochon, the public might understandably think of the food of Montreal as excessive. But the aforementioned places are more the exceptions than the norm, and Quebec’s high-end restaurants like Les 400 Coups serve way more elegant and subtle cuisine.

The trout in my appetizer was very lightly cooked, and seasoned with clove, a pairing that worked really well. The beets came in two preparations: the yellow beets were cooked, and the red and white beets were slightly marinated. Together with the yogurt mousse, this created a beautiful plate with very Russian flavors. 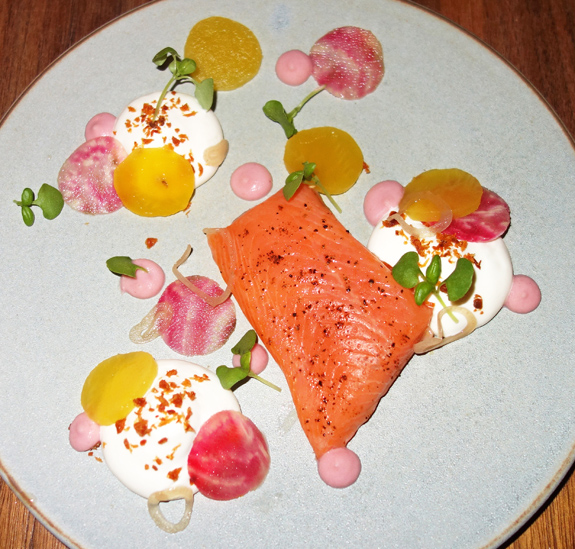 The arctic char had a lot of flavors going on, but everything still worked together when I managed to get it all in a single forkful. The fish was dressed with two sauces: an “angels’ share sauce” that reminded me of a beurre blanc, and a sea-buckthorn sauce (sea-buckthorn seems to be growing in popularity in Quebec). The char was again cooked to perfection, with very crispy skin, and served on a bed of rye. I think this was the first time I’ve eaten rye as a side. It was a bit dry and could have been more interesting if it had been prepared more like a kasha, with butter, onion, mushrooms, and/or bacon. The garnish was completed with honey fungi and thinly sliced fennel that had been slightly cooked with wine and sugar (I think). 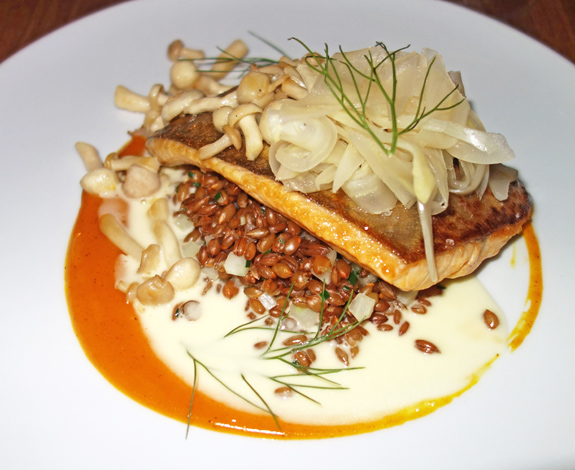 I also found a couple of Eastern European entries on the wine list, and they were even available by the glass! Samuel Tinon‘s sweet Tokaji Szamorodni 2004 was just OK. The producer can wax lyrical all he wants, but to me it smelled and tasted mostly oxidized. The Mužla 3 Cuvée 2012 from Bott Frigyes, a Slovak white, was a nice surprise. It was dry, though with a tiny bit of sweetness, and the nose was quite floral.