Since I’m spending a week at the IBM food truck for the SXSW festival in Austin and don’t have a kitchen to work on my own recipes, let’s turn to Watson to make us something. (If you wonder what a food truck created by IBM looks like in the field, check out this article and video on Engadget.)

When I introduced the Cognitive Cooking technology, I explained how computers could be creative, and create novel and tasty recipes. It’s worth noting that rather than making all the decisions by itself, our technology engages in a dialog with the users, with repeated back-and-forth interactions between people and the computer. Yes, a machine can be creative, but more importantly, it can help humans be more creative themselves. 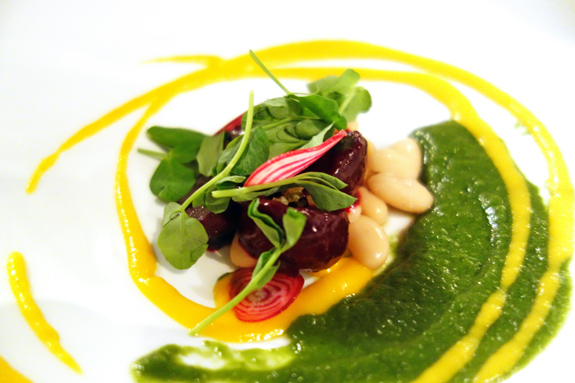 The Russian beet salad that James Briscione created is a great example. We started with beet as the main ingredient, and naturally chose Russian cuisine for inspiration, due to beets’ long association with Eastern European cuisine. James decided to make a salad, because this was sufficiently vague that he could have more flexibility in the preparation and the plating. The system came back with the following list of ingredients: beets, cucumbers, tomatoes, basil, parsley, red wine vinegar, butter, white beans, pickles, prunes, black pepper (no margarine this time ;)). Sure enough, these were all very Russian. But did they really all go well together? We certainly hadn’t seen a salad quite like this anywhere else.

Here’s what James said about the dish:

Prunes and pickles. Need I say more? This seemingly disparate list of ingredients presents a challenge at every turn. While there are some traditional parings like tomato, cucumber and basil, the connection between beets, prunes and pickles was particularly unexpected. Together the balance of sweet, tart and earthy makes each bite more interesting than the last. 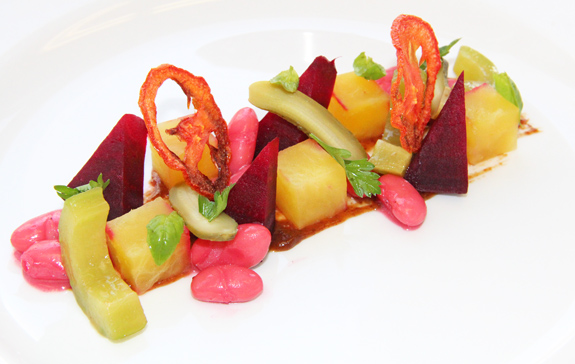 Over the course of a few months, as we had people try the dish on various occasions, James ended up doing not one, but three versions of this Russian beet salad, each with the same ingredients (and I imagine he tried a few more in the ICE kitchens). I’ve added pictures of each incarnation throughout this post. As you can see, we drifted a little bit away from the typical salad — the technology is meant to inspire chefs, not to limit them.

James didn’t write down the number of servings, but you can probably make around a dozen appetizer plates with the recipe I’ve shared below. The proportions are in grams, and I have to say I’ve been tempted more than once to do the same with my own recipes. Get a digital scale and some plastic containers, and you’ll measure ingredients faster than you ever have before. 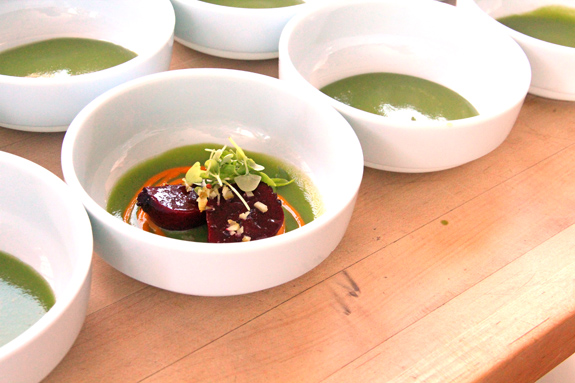 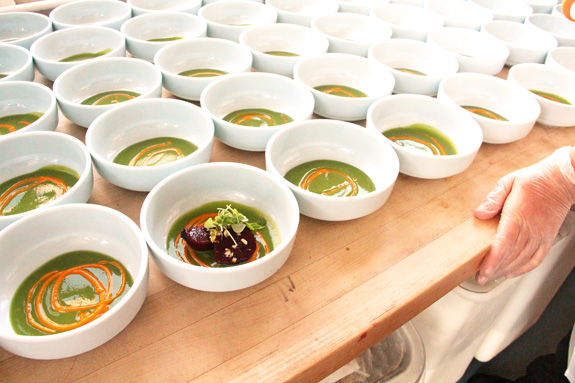 The recipes for the beet salad are courtesy of James Briscione.

The posts on this site are my own, and do not necessarily represent IBM’s positions, strategies, or opinions.

What beautiful plating! I never would have thought of these ingredients together, but they definitely look delicious. I love how bright everything is!