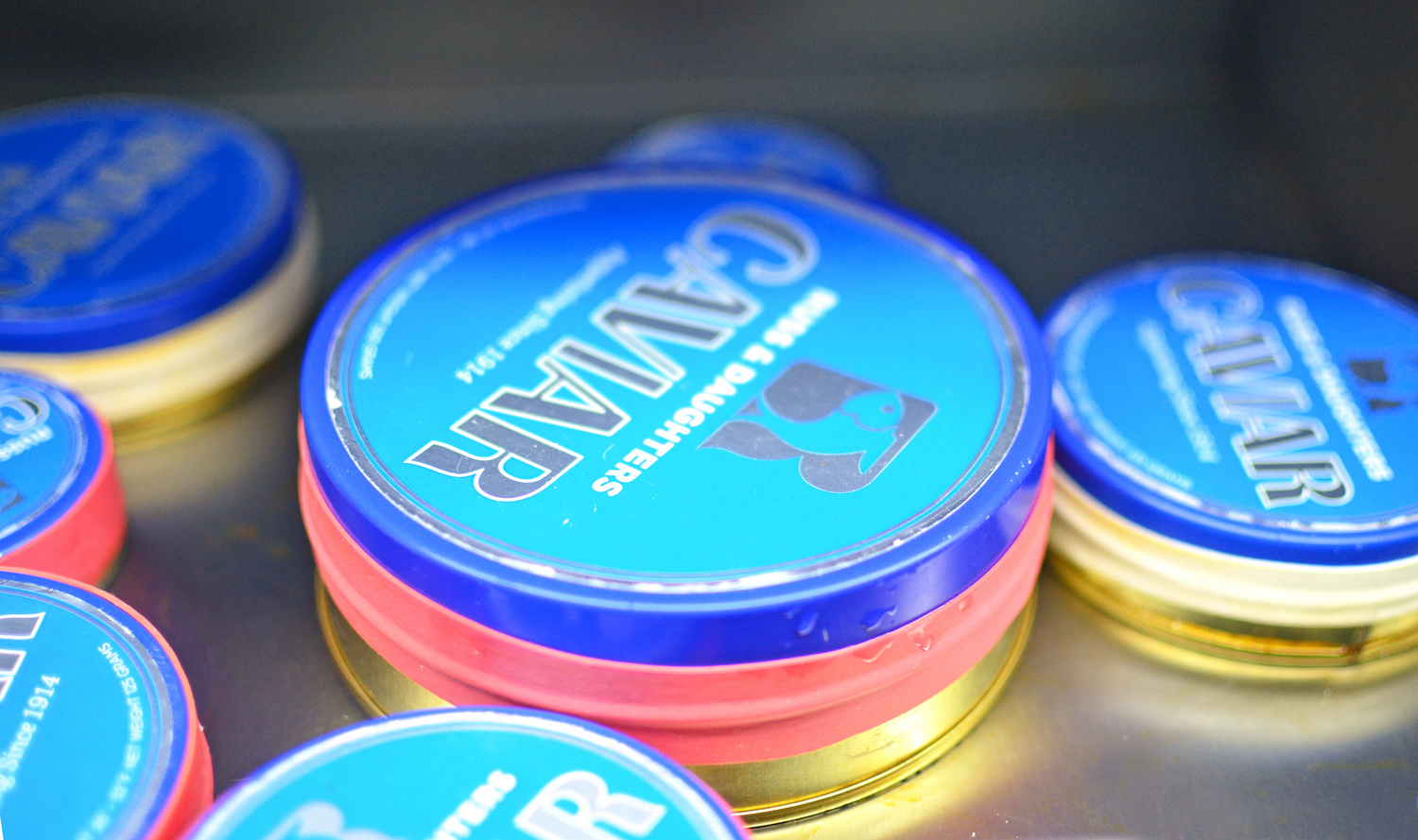 Russ & Daughters has been a Lower East Side institution for a century. The story of this smoked fish and caviar purveyor starts with its founder, Joel Russ, freshly arrived from the Austro-Hungarian Empire, selling strings of Polish mushrooms on the street. Russ first carries his merchandise on his shoulder, then buys a pushcart, and finally, in 1914, opens a store, where he starts expanding his offerings by selling salted herring and salmon. In 1933, he renames his business “Russ and Daughters”. The store remains in the family to this day, three generations later. Russ & Daughters Café, situated a couple blocks down on Orchard Street, opened last year in celebration of the store’s 100th anniversary. Does it live up to the reputation borne by its name, or is the whole idea of a jubilee eatery just full of schmaltz? Read on! 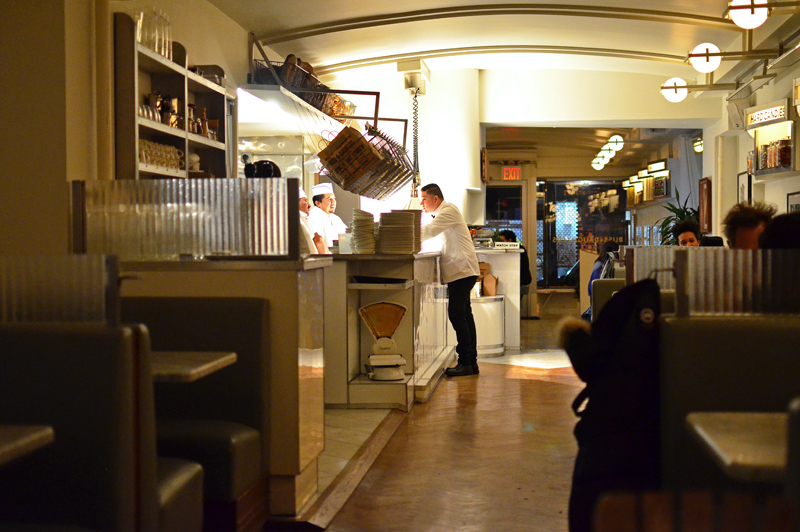 Russ and Daughters Café is one of those annoying places that think they’re too cool to take reservations. As a consequence, the brunching gentry can expect to wait a good three hours on a weekend morning, just to drink their precious little mimosa and eat that immutable, older-than-the-man-Russ-himself, Eggs Benedict. But here’s a secret: savvier patrons opt to show up for dinner, when they can be shown to a table immediately and gorge on platters of smoked fish washed down with a few bottles of bubbly and a tray’s worth of vodka shots.

Unlike at other smoked fish and caviar purveyors-cum-restuarants in NYC, such as Petrossian or Caviar Russe, the dishes served at Russ and Daughters Café stay very close to the original mission. A prominent half of the menu is filled with smoked fish boards and platters, herring and caviar, and the house products are also heavily featured in the remaining appetizer and egg dishes. The approach is also more varied than simply adding a spoonful of caviar to random dishes for an exorbitant extra charge. 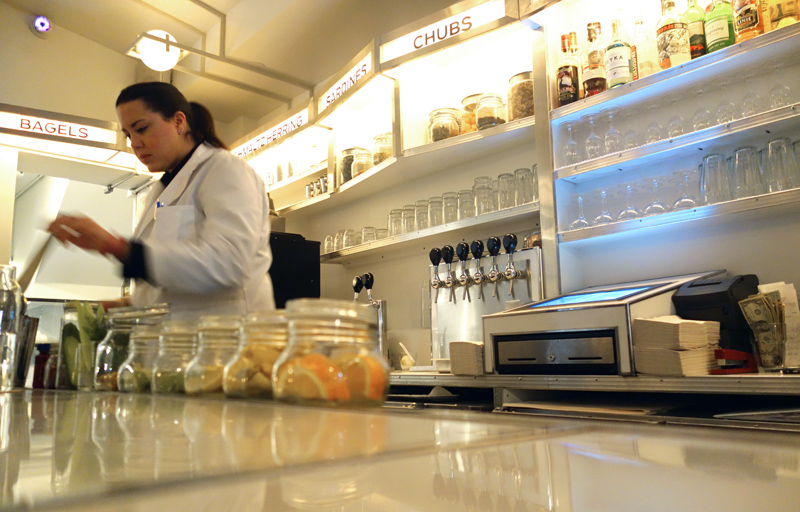 Before taking seats, the first stop’s at the bar where the white everything, down to the bartender’s attire, evokes a chemistry lab rather than a place for relaxing libations. My Lower East Side cocktail (Tanqueray gin, lime juice, dill, cucumber juice) was well balanced, and not too strong. The lime brought some nice acidity and I could taste the cucumber, but the dill got lost in the mix. 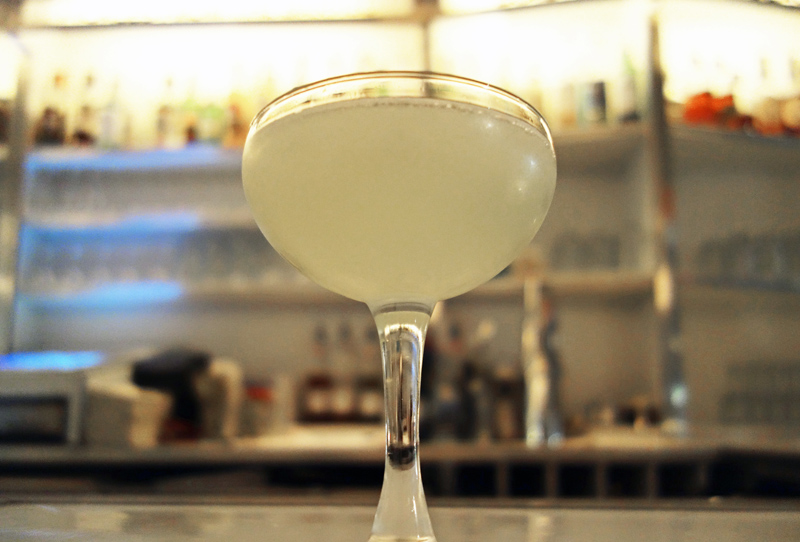 Once seated in a retro booth at the back of the room, we picked the colorful chopped salad for a start — avocado, egg white, beet, smoked whitefish, egg yolk, matzo, green apple, and dill. Simple but all very good, with an assortment of fatty, mouthwatering, and crunchy textures. I did find it interesting that the ingredients weren’t all tossed together, leaving me the opportunity to compose my own mixtures. 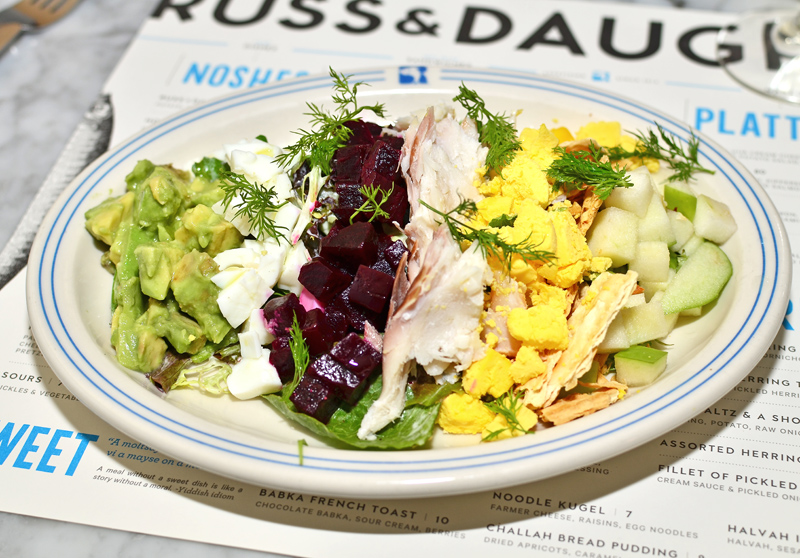 Next up, the knishes were rather disappointing. The dough was very thin, almost like a flour-tortilla wrap. The potato filling was kind of sweet but really dense, without any fat at all. This pretty boring stuff was somewhat improved by an excellent whole grain mustard on the side. I’m not sure what happened to the caramelized onions announced on the menu — were they inside the knishes? (I don’t mean to brag, but if you want to try a seriously good knish that flips the bird to traditions, try my recipe instead.) 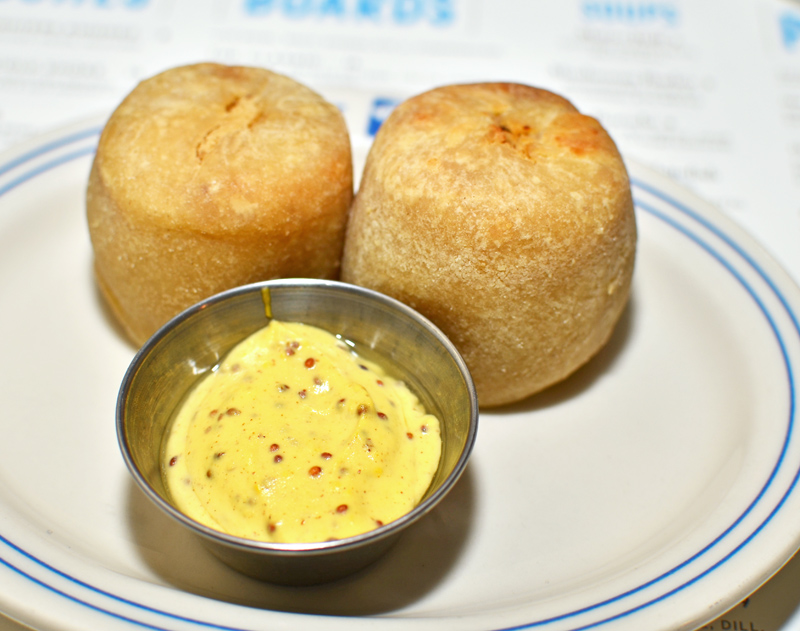 The potato latkes could be ordered with either apple sauce and sour cream, or with salmon roe and crème fraîche. The excellent pancakes, crispy outside and soft inside. were a mix of potatoes, onions, and a fair amount of fat. We opted for the salmon roe, which was delicious, the large, thin-skinned eggs providing bursts of flavor when we ate them. Although the appetizer was reasonably priced, the serving size was somewhat disproportionate, as the roe barely covered one latke. 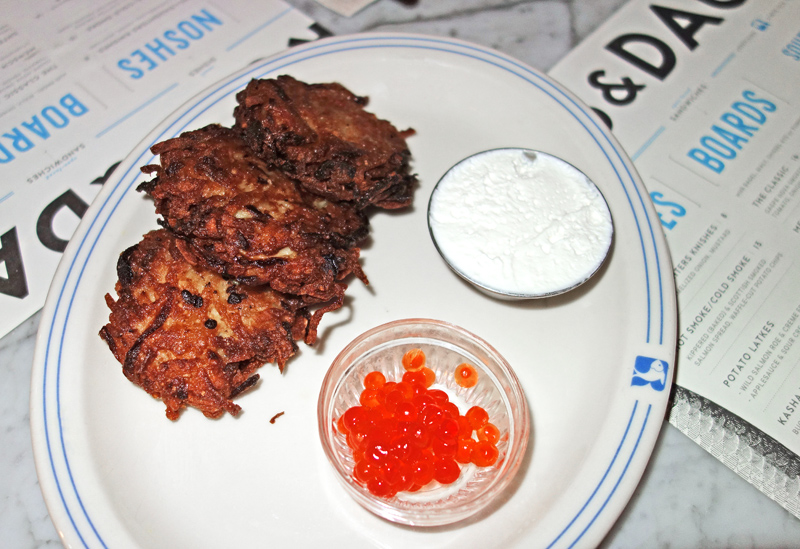 I forgot to take a picture of the generously served assorted herring plate (you can see some shots at Eat This NY and The NY Daily News), but it was quite commendable since most places I know only serve one kind of herring. Here we got four, neatly arranged on a small platter. There was a classic pickled herring, slightly sweet and citrusy, good but not my favorite; the rollmops (herring fillets wrapped around pieces of onion), pretty similar but more acidic; the Swedish matjes, quite sweet with a hint of cinnamon, very nice; and finally the schmaltz herring, barrel-cured, fatty and salty, melting in your mouth. The fish came with beets (specifically recommended by the waitstaff as a palate-cleanser) and pumpernickel bread. There were also several sauces on the side (curry-buttermilk, mustard-dill, and crème fraîche), but I could hardly taste them when I ate them with herring and bread. Newcomers to comfort food for the Slavic soul might want to order the “Schmaltz & a Shot”, consisting of the above-mentioned schmaltz herring, boiled potato, raw onion, and a shot of vodka.

Now before we get to the details of the fish platters, a short lesson on smoked salmon this side of the pond. Whenever you see “Nova” salmon, it refers to fish that’s been cured in mild brine, then cold-smoked (at a temperature below 83 F, in the case of Russ & Daughters). The name simply dates from a time when much of the salmon in New York City came from Nova Scotia. If the fish is hot-smoked, it’s called kippered salmon, and it’s just as much of a New York specialty. 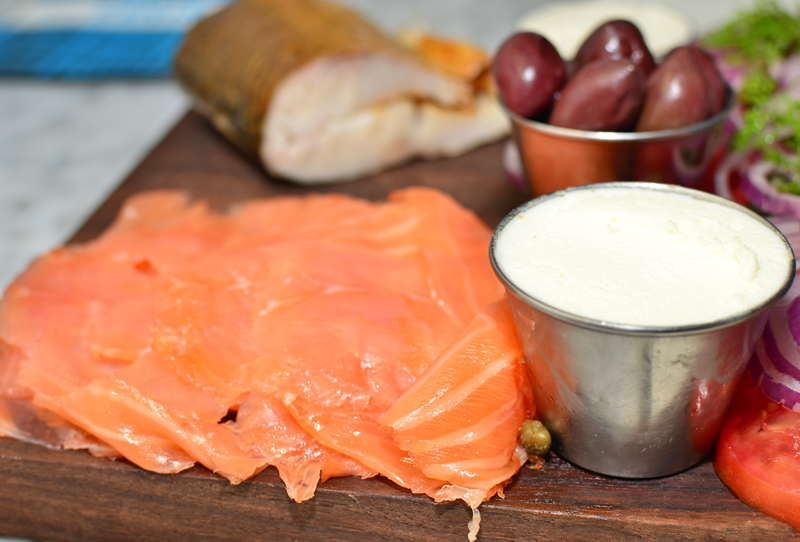 The fish platters, named after Joel Russ’ daughters, claim to serve 3-4 people, and 3 seems to be the right number. You can manage to eat one whole platter  if your party is just 2 people, but plan to eat nothing else.

The Hattie platter was a well-balanced assortment of four types of fish, half of them cold-smoked and half of them hot-smoked. The hot-smoked whitefish, was pretty much as good as whitefish gets, not dry at all, with just the right saltiness. And if you want more salt, the capers on the side pair very well with it. The sable was your typical flaky, cold-smoked sable. This is a fish I like a lot, and Russ & Daughter’s prepares it very well. The Gaspé Nova salmon (Atlantic salmon from the Gaspé Peninsula) was mildly salted and succulent, fatty without oozing grease, with the kind of melt-in-your-mouth sensation I look for in good cold-smoked salmon. The kippered salmon, though good, fell short of extraordinary, being not very smoked and a tiny bit bland. 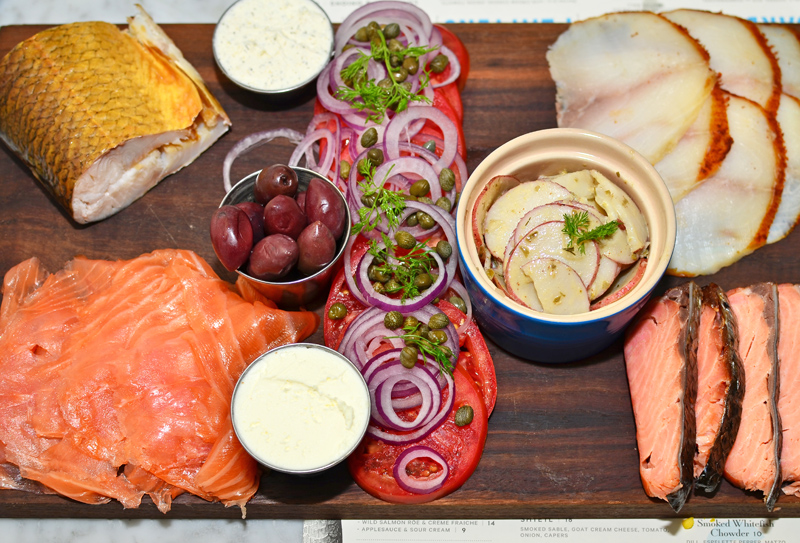 The platter came with a laundry list of accouterments: plain cream cheese, horseradish-dill cream cheese (great with most of the fish), olives, capers, thinly sliced raw red onion (why not salt or pickle it instead?), very ripe and flavorful tomatoes (in the middle of winter!), and a salad of tender but rather plain sliced potatoes. 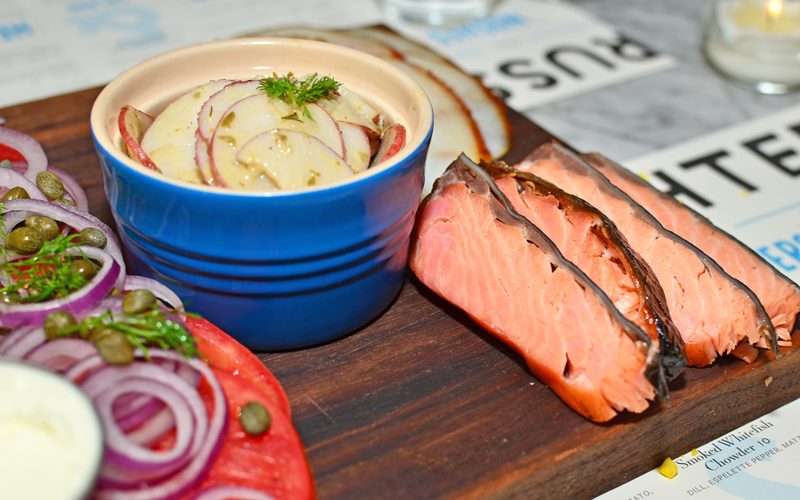 Then of course there was the bread basket in which I believe I spotted some toasted plain bialy and/or bagel, some everything bagel, shissel rye bread, challah bread, and pumpernickel bread. All of them very fresh and tasting good. Apparently, the café has its own baker — you can read more about it in this great article. 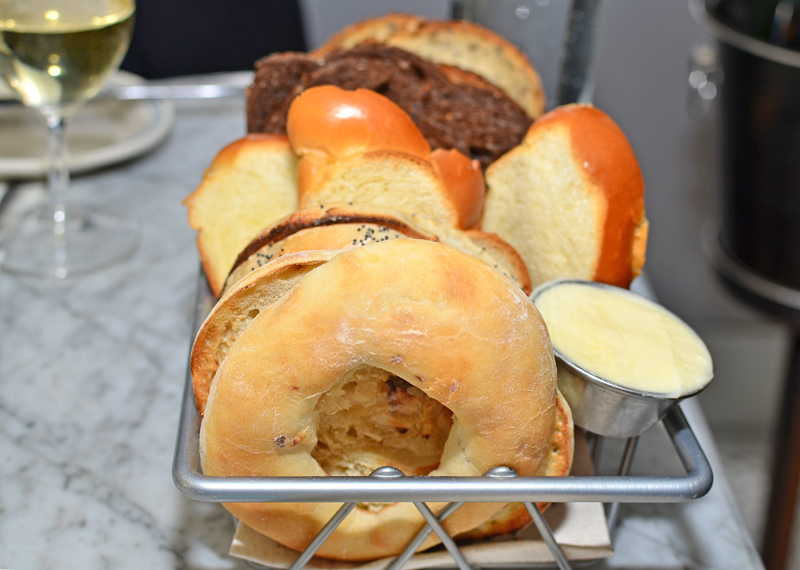 The Anne platter, the most expensive on the menu, offered more high-end fish. The proletarian whitefish was replaced with more noble “Private Stock” sturgeon. Says their web site: “It’s so special, that you won’t see it on view in our showcase. Initiated customers know that they have to make a special request for it.” That or they can just use the internet, like 40% of the world’s population. Special or not, it was indeed excellent, with a delicate taste free of any hint of muddiness. Of course there’s salmon roe, just as good with the bread as it was on a latke, and sable again.
The hot-smoked brook trout was a little dry, which I guess was to be expected from that fairly lean fish. What surprised me more was that the Western Nova smoked salmon (wild king salmon from the Pacific) was also lean and therefore dry. I tend to think of king salmon as a very fatty fish, but it certainly depends where you catch it in its migration route. After hundreds of miles swimming upstream estuaries to spawn, it gets much leaner.

I haven’t tried the Ida platter, but it consisted of an assortment of salmon preparations only: Scottish smoked salmon, Gaspé Nova smoked salmon,  pastrami-cured salmon, and gravlox. All three platters featured the same garnishes and breads. 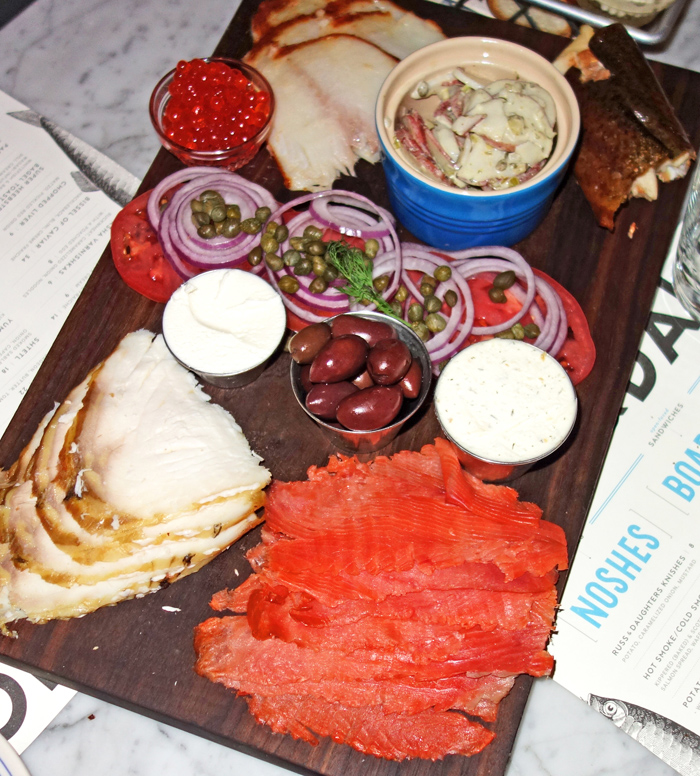 The dessert menu featured Jewish Eastern European classics: babka, blintzes, challah bread… The chocolate babka arrived warm and loaded with chocolate. The sour cream cut the sweetness and richness of the delicious cake, and the strawberries went well. It wasn’t really a surprise given how often these ingredients are paired together, but it was still a very good dessert, far from the impression often conjured by the typical babka (heavy and bland). 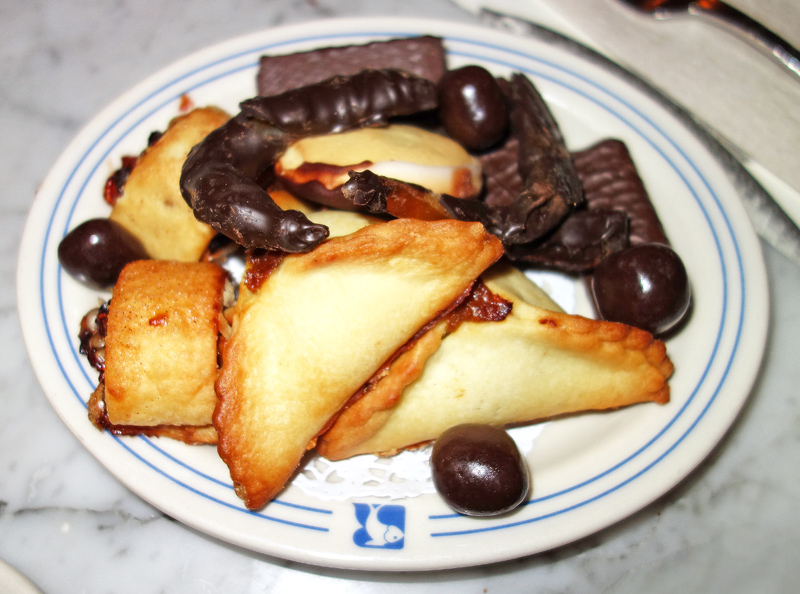 While the wine list was pretty short, it included interesting choices of sparklers such as the Királyudvar Tokaji Pezsgő Henye. Alongside the cocktails, the drink list also mentions a few beers I’ve never heard of plus a handful of vodkas, from Texas’ Tito’s to Jewels of Russia. There’s also a selection of homemade sodas that I didn’t get to try, ranging from classic vanilla-flavored cream soda to a more original cucumber soda with jasmine, anise seed, dill seed, fennel seed, and lime.

Russ & Daughters Café manages to offer an affordable if not cheap sample of the products that made famous this century-old institution (if you avoid the $180 scrambled eggs with caviar, that is). The focus is rightfully on the smoked fish, cured roe, and Eastern European Jewish specialties, not haute-cuisine, and the food is prepared really well. The portions are generous, and the fish platters are are both tasty and luxuriously varied. Too bad they don’t have those Polish mushrooms that Joel Russ started his career with. Or carafes of vodka, which would help you avoid awkwardly covering your table with shot glasses. It all sounds mouthwatering – just the kind of reading for a calorie-fearing woman living in rural France!