It’s been a while since my last Red Alert post, but this one’s actually been in preparation for a few months. Once again, we’re heading to a high-end restaurant that just so happens to use in its dishes some of the ingredients that you frequently see on these pages. Gabriel Kreuther, facing Bryant Park in Midtown West, is an Alsatian restaurant, and if I were to claim that Alsace is where Eastern Europe starts, I’d only be exaggerating by 500 kilometers. Let’s compromise and say the region has a very Central European feel.

You can have two disparate meal experiences at Grabriel Kreuther. The main dining room obeys the diktats of the Michelin Man, and has been awarded one star. Langoustine, lobster, truffle, foie gras, caviar, white asparagus, and artichoke are all there. It’s a miracle that pork tenderloin (with morcilla, no less) made it onto the menu — pork is often animalis non grata in Michelin-starred establishments, and the only other porcine notes around are hints of prosciutto and pancetta. The large bar area, which offers ample seating without reservations, is a different affair. Deaf to the democratic trend of serving the same menu wherever you sit, Mr. Kreuther thinks there’s a distinct place for everything: caviar and FG for the happy few in the elegant dining room, country sausage and tripe for the plebes at the bar. 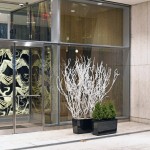 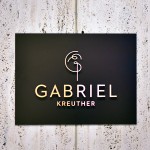 No, it’s more complicated than that. While there are a number of rustic dishes available only at the bar (such as the tartes flambées, various sausages, braised tripe, duck confit and beef tartare), the casual walk-in can also indulge in haute ingredients with the king crab salad, foie gras terrine, sturgeon tart, lobster gnochetti, and wagyu beef. But the two menus present a surprisingly small overlap, which means a commendable number of dishes for the single kitchen to prepare. And regardless of where you eat, you will find yourself in decidedly modern but elegant surroundings. 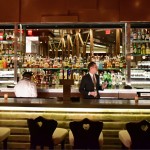 In fact, everything is modernist-beautiful at Gabriel Kreuther: the decor, the slender silverware with the three-tined forks, the little trays that attach to the side of your table for holding the tartes flambées, the potbellied wine glasses (from the Oenomust collection by Lehmann Glass), even the diamond-pattern water glasses. Ladies and gentlemen, here’s my first picture ever of a glass of water. 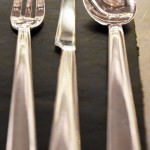 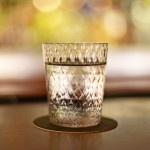 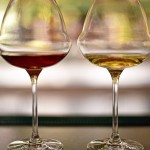 For this Red Alert, all the dishes of interest are available at the bar. And I’d recommend the bar area for another reason: you can show up at peak dinner time on a weekend and get a table without waiting. I can’t guarantee that this is always the case, but when I visited on a recent Saturday night, the bar was surprisingly quiet. The noise level is also very reasonable, if that’s of importance to you. But let’s move on to that Red Alert business.

The sturgeon tart (“caviar mousseline, applewood smoke”) is probably the dish that instigated this post. First let me set the record straight. Where I come from, this is called a tartlet, not a tart. In fact, I call this a small tartlet. Not a mini-tart, but close. So enjoy every second of it, from watching as the waiter brings it to you under a smoke-filled dome, to picking the last tiny crumbs off the dramatic plate. If we look at the layers from bottom to top, we get: a very crispy and crumbly pie crust, almost like puff pastry but thinner; a bed of tangy sauerkraut; a thick-cut piece of very tender hot-smoked sturgeon; a kind of hollandaise that’s a bit citrusy (the mousseline — is it really what this is?); a pretty generous spoonful of caviar, some chopped chives, and a cute edible flower. While it is very good, I do find that the acidity of the sauerkraut ends up masking the caviar and some of the subtlety of the dish as a whole. You can barely taste the caviar, really, which is too bad. Otherwise, a very inspiring dish. The king crab salad is really tiny again. It seems so simple: small pieces of plain king crab legs, topped with mâche, frisée, and a very fine julienne of radish, in a small puddle of green sauce. The crab legs are very flavorful, and skillfully complemented by the bitterness of the frisée and the freshness of the radish. I’m not quite sure what the accompanying green sauce is, but it’s pretty acidic, which goes well with the crab. It also makes the crab very moist, which points to a generous fat content. The waiter says it’s sage, a bit of lemongrass, and mayo. I say it’s mostly mayo. Great pairing; very cute, but at the same time a bit anticlimactic. “Less is more”, some say. “Until at some point it just becomes not enough”, I would add. Though regarding the portion sizes, I’ve learned that since my last visit the menu has been re-organized into new categories that might help you plan your meal better. 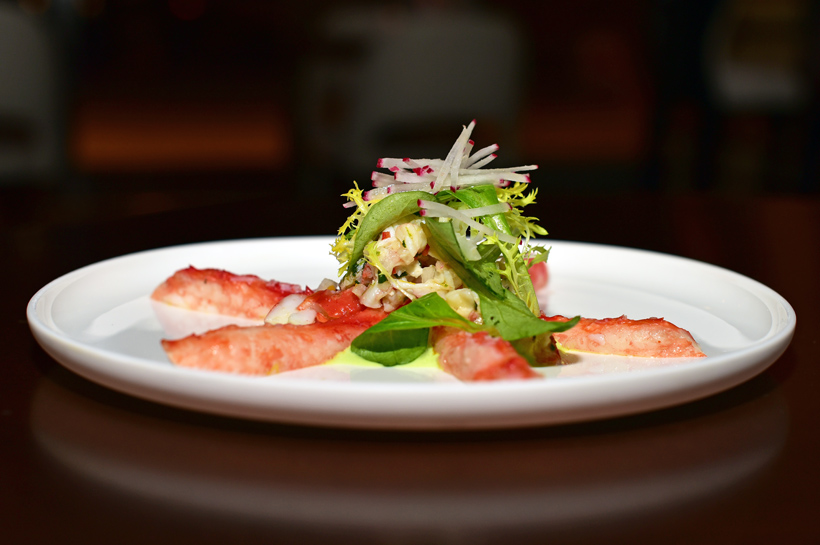 We’re now moving on to what was once the sausage section of the menu, which has since been integrated with other categories. The country sausage (“house-made sauerkraut, violet mustard”) is a simple dish too, but unlike the crab salad, it delivers more than you expect. This is probably one of the best sausages I’ve ever eaten. The texture is very unique, very finely ground (almost as if the meat was cooked before being stuffed in the sausage), extremely soft and airy. There’s cheese but the mixture isn’t greasy; there’s no juice running out but it’s not dry at all. At the same time, the pork meat is very flavorful. The homemade sauerkraut is outstanding as well, a combination of coarsely chopped  and much thinner pieces, perfectly pickled. Even the violet mustard is delicious, floral but not too much so, and a little bit sweet. Everything is so well executed that you forget the triviality of the core ingredient trio (sausage-sauerkraut-mustard). As for the plating… the fad for cramming the food onto only one half of the plate strikes again! It really looks as if the food was pushed aside to make room for something else that never came (a side of frites?). Seriously, does anybody find this attractive, or is it the latest trick from greedy restaurateurs looking to slash their dishwashers’ already meager pay by half? The mangalitsa morcilla (“potato salad, parsnip purée”), with its adapted spelling of mangalica for non-Hungarian speakers, is the exact opposite. It too could have been another rustic dish — it’s blood sausage and potatoes! What you get instead is a complex dish with many different textures: very tender dice of boiled potato, discs of raw apple, impossibly creamy parsnip purée, crunchy purple potato chips, and fresh celery leaves. The pairings aren’t new (blood sausage and apple, apple and parsnip), but they’re skillfully emphasized. A bite of the raw apple topped with the parsnip purée is almost like eating a new and better variety of parsnip with an extraordinary texture. At first you might not even spot the excellent blood sausage at the bottom of the bowl. But it’s there, and rather than morcilla, it could just be called boudin noir. As it contains no cereal filling, it’s more flavorful than many of its Hispanic or Eastern European cousins, and the texture is extremely soft. Here, the sausage has been sliced and seared until crispy outside. The announced potato salad is just potatoes, chives, a hint of acid (vinegar?), and the celery leaves. If I had to make one criticism, I’d say there’s slightly too much of this potato salad. Still, this is truly an impressive dish, with superb texture contrast. 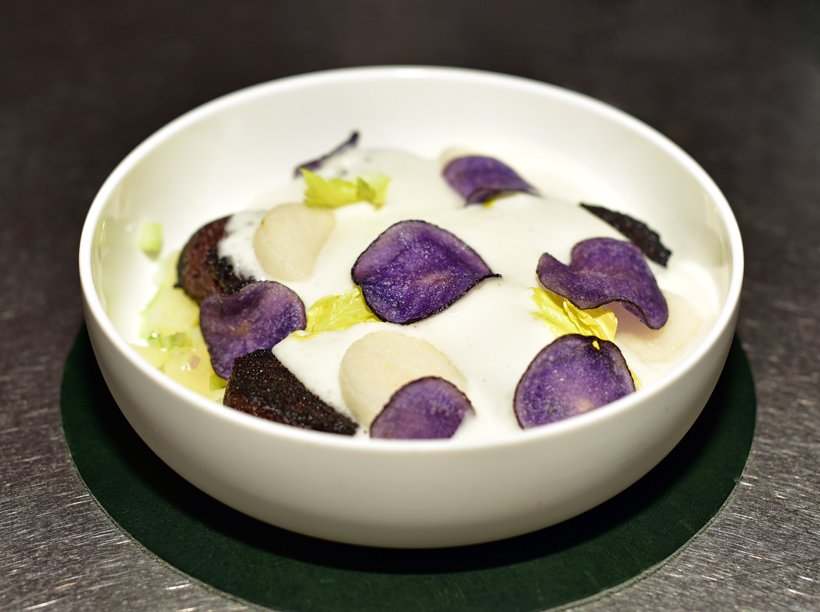 Then there’s the eye-catching section of tartes flambées, an Alsatian specialty. It starts with the classic, “smoked bacon, onion, crème fraîche, fromage blanc”, and we’re back in genuine rustic territory. The dough is very thin and crispy, with a pretty neutral taste, as is common in a tarte flambée (think thin-crust pizza). The amazing bacon is very smoky and cut into an impossibly thin julienne, to the point where you can hardly tell what it is in the dark dining room. Together with equally thinly sliced onions, it rests on a thick mixture of crème fraîche and fromage blanc, just as advertised. Delicious! 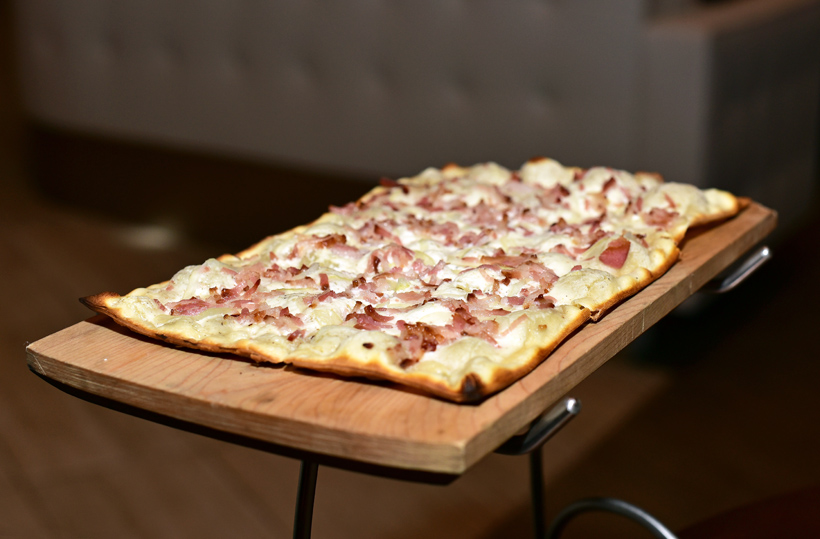 There are several other versions. The caviar and sea urchin (“horseradish, lemon, celery”) variant disappeared from the menu before I could try it, but its gravlax cousin (“salmon roe, onion, sorrel, horseradish”) is still there. The thin crust is covered with the same crème fraîche, fromage blanc, and onion as the previous one. Then comes the salty and peppery gravlax, topped with excellent soft-skinned salmon roe, and just the right amount of fresh microplaned horseradish (assuming you like horseradish, of course). There’s also a hint of sweetness, coming from either the onions or the gravlax. These tartes flambées all boast very bold flavors. 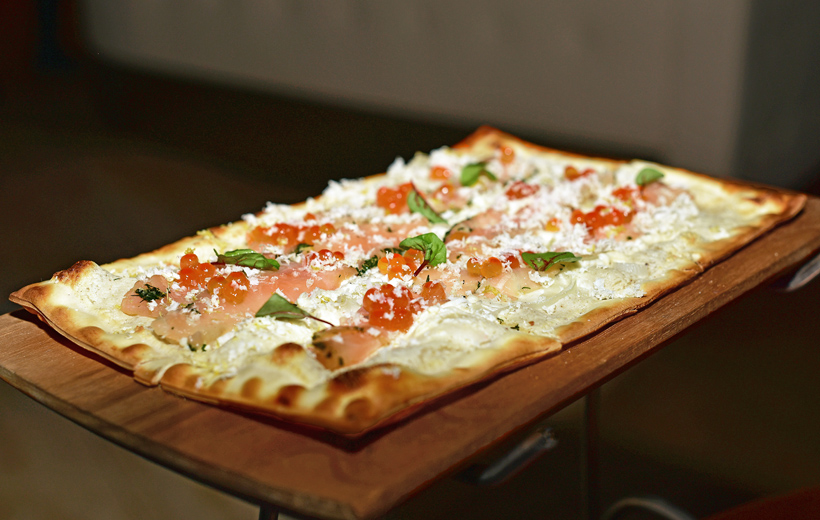 Sturgeon, caviar, king crab, sauerkraut, sausages, potatoes, onions, bacon, salmon roe, and cured salmon — I told you it could be an Eastern European restaurant! As far as my Red Alerts are concerned, the recipes at the bar feature classic dishes and classic pairings, most with great execution, and some with interesting re-interpretation. If you’ve read this blog for long enough, you should know this is the kind of stuff that appeals to me, although I certainly wouldn’t say no to more adventurous pairings here and there (Chef Watson, anybody?). The main dining room (in which I have not yet eaten) delivers some of those exciting flavor combinations on paper: ocean trout + sweet peas + prosciutto + dill, sea bream + fennel seeds + coriander + green tomato, lobster + potatoes + ramps + coconut, to list a few. But, unless I trade my shapka for a schlupfkapp, I won’t be talking about them on this blog.

Dinner at Gabriel Kreuther, even in the bar area, isn’t cheap, but it’s quite worth it. If I was rating the Red Alert food, it would probaly be somewhere between 8 and 9 out of 10, and probably closer to 9. And hey, if you’re on a budget, maybe you can just stop by to get some water in one of those pretty glasses.