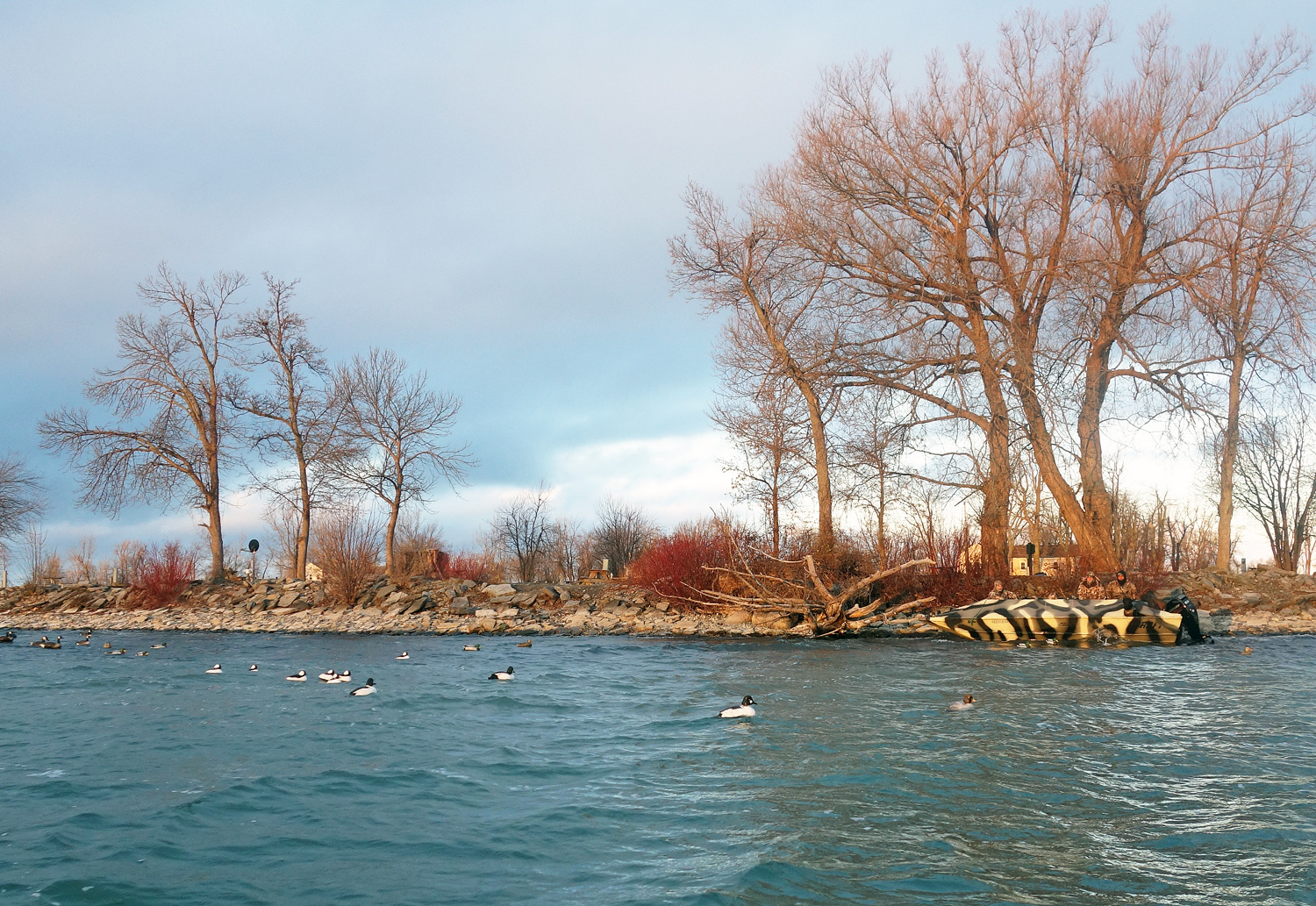 I’ve been hunting waterfowl on Lake Ontario about once a year for three years now, and of all my formative hunting trips, these are probably my favorite. These outings have also resulted in a couple of posts on these pages. First the Wild Duck and Goose Rillettes over two years ago, where I briefly narrated my first business encounter with the palmipeds, far away from Central Park. Then last week, I published my Central European Wild Duck, with its Potatoes and Red Cabbage, where I spent more time expatiating on Bohemian culinary mores than on the art of putting food on your family the Paleo way. Yet, there is still much to be said about the journey that takes one from the city that never sleeps to the village that wakes up at 3:30 am to put on camo, go out in the freezing cold, and shoot at quarries big and small, as seasons dictate.

And it all begins at the West View Lodge, in Henderson Harbor, NY.

I distinctly remember my first time at the West View Lodge. As is often the case during my hunting and fishing trips, I arrive late in the evening after a five-hour drive. In fall and winter, Henderson Harbor is downright deserted well before bedtime, and nobody’s venturing onto the lake by boat. There are essentially two roads in town: dimly lit Harbor Road runs along the natural harbor, and pitch-black Harbor View Road, obviously named with sunny-summer-day drivers in mind, runs deep into the middle of nowhere (locals call it the countryside). It’s the perfect scenario for a horror movie in my head. “City boy takes a wrong turn off the I-81 and is forced to stop for the night in a ghost town on frigid Lake Ontario.” Finish it up with your favorite moments from The Texas Chainsaw Massacre, Deliverance, and Calvaire.

The West View Lodge seems to be the only place open all year round, although it could just be that other joints don’t enjoy the same relative popularity. On weekends, there’s often a small crowd at the bar (looks like Henderson Harbor’s not so deserted after all; you do come across the odd drunk driver). After checking in, I climb upstairs to my room and quickly make the acquaintance of the lodge’s weakest point: the heaters. As I will learn throughout my subsequent stays, these infamous heaters come in three flavors. There are the ones that simply don’t work, the ones that kick off with such a delayed reaction (we’re talking several minutes) that you think they don’t work, and the ones that may theoretically work but don’t have a knob. It can be very hard to tell which kind you’re dealing with; even the presence of a knob doesn’t give you much of a hint, as there are broken knobs too. Only one thing’s for sure: you will not be warm. I spent my first night fully clothed, under both blanket and bedspread. After a night of valiant efforts, the heater had brought the room to a meager 12 C / 55 F. I could now sleep without the bedspread — that is, if I didn’t have to get up at 3:30 in the morning.

Owner Captain Bill presents the place in a slightly different light in his video below. Unsurprisingly, he uses more superlatives than I do, but he does have a point when saying that it offers “all the amenities for the traveling sportsman”: dining, bar, motel, outfitting services, even a bait and tackle shop. Aside from actually fishing and hunting, you won’t need to leave the lodge. And that’s good, because there’s absolutely nothing else out there in a 15-minute driving radius.

Fast-forward to my latest visit, in late November 2015. I’m in luck this time! Captain Bill gives me his very best room, the one just above the bar’s jukebox, a real treat for music lovers. The heater works, so really I should just shut up and count my blessings. Still, from the reasonable comfort of my bed, instead of catching a few hours of well-deserved sleep, I wiggle to the sound of country hits like “Why Don’t We Get Drunk And Screw“. Either the audience holds their liquor really well, or isn’t very receptive to the message, because it takes a terribly long time for patrons to vacate the bar, or even just leave that jukebox alone.

Truth be told, the bar has some cachet. The wood-paneled room is decorated with antlered, feathered, and finned trophies, a testament to Bill’s decades of avid outdoorsmanship. Ornamenting the staircase are pictures of retrievers dutifully bringing back ducks in their mouths, to further put you in the right mood. In addition to the main room there’s an extra dining room for the summer, when I hear the place is quite popular.

And there’s nothing terribly wrong with the food, even though many people on TripAdvisor disagree. Nobody tours the area in search of fine dining, obviously. The boss himself eats there all the time. In fact, pretty much every hunting day ends with the group having a late lunch together, and sometimes even an early dinner a few hours later. You’ll find all the usual options on the menu: wings, pasta, sandwiches, and the odd fish dish. Captain Bill also gives his own name to a beast of a burger with bacon, cheese, and an egg.

No, the real reason to visit Henderson Harbor is Captain Bill and his guided trips on the lake, whether you’re fishing or hunting waterfowl. This is a man who can ID a duck in the sky when all you can see is a little dot on the horizon. Who kills so many Canada geese in a season that US Airways once considered hiring him to prevent future aircraft strikes. Who walks out on a frozen lake, looks around, drills a hole, and immediately starts pulling fish out of the water like he’s at the New York Aquarium. Who owns so many boats for his guiding trips that if he buys another one, he’ll have to move to a bigger town to moor it.

Alright, it’s time to go shoot some ducks! During a quick breakfast at his place, Bill and his other guides discuss possible hunting spots for the day. We then load the boats with our gear and set out for whichever part of Henderson Bay will offer the most favorable wind (or better yet, no wind). Once there, we drag the boat to the shore and set up a nice spread of decoys. According to Bill, the “design and utilization of our boats as well as the rigging of our spreads is legendary in the Seaway region.” Wanna see a piece of the legend? Admire this boat (photographed on the way back):

It takes time to set up all these rubber ducky decoy. There can be something like one hundred of them, of different species, in different positions (landing, chilling). Inevitably, there’s one anti-social element that decides to drift away from the bunch and must be fetched back. Then when we’re done, we wait, listening to Captain Bill re-telling questionable jokes about Bozo the Clown. But you really have to keep your eyes open, because before the punch line, in the dim light of dawn, there might be a few birds coming out of nowhere to socialize with your decoys. While you stare at the birds stupidly without truly registering their presence, Captain Bill, or one of his expert guides, grabs a duck calls and starts calling (unless he’s in the middle of a really good Bozo the Clown joke).

A few seconds later, the ducks realize that their cousins on the lake aren’t what they appear to be, and there’s a bunch of people who dress funny shooting at them. They turn around, these smart birds. Once it’s all over, you barely know what happened. Did you kill any of those birds? How could that one fly away when there were six of us shooting at it? And what about the one that went down and is now swimming away out of gun range — can somebody get it before it’s too late? I want to believe that it’s no coincidence if some of the ducks fell down right after I fired, but what do I really know? After the smoke has settled, Bill sends the retriever to fetch the dead birds. Cold lake, good dog.

Reload, repeat. There are times when the dog hasn’t even come back yet and the next flock of ducks is already approaching. And then there are times when you have to go through a couple hours of Bozo the Clown before you see the next bird. Or the birds just just refuse to answer our calls. Sometimes I wish we could shoot swans too (apparently they’re perfectly edible, you’re just not allowed to hunt them in New York State). Regardless, there is still considerably more action than in any other form of hunting I’ve yet tried. Fun is had by all, and I’ve never come back empty-handed. We start packing by noon, and again it takes quite a while to pick up and re-tie the dozens of rubber duckies. We take a few pictures of the day’s bag, and head back across the bay.

Back at the harbor, we unload the boat and clean the ducks. As I mentioned in previous posts, this activity can take various forms, depending on your involvement. If you just watch Captain Bill do it, you’ll only get the breasts, otherwise you’d still be watching him when the sun goes down. If you just watch Captain Bill do it, chances are you wouldn’t know what to do with the rest of the carcass anyway — a wild duck leg is no turkey leg, and I’d like to see your guests’ faces if you hosted a wing night with wild duck wings. If you get your hands dirty, you can take whatever you want. There’s no point in plucking the birds since you shouldn’t eat the skin or fat anyway (see here). But with a little bit of practice, you can skin them whole reasonably fast, and, later, pick every last ounce of meat off the bones. Now I even bring my portable vacuum-sealer with me, and stick everything in sous-vide pouches as soon as I’m done. It’s glorious. Then, time for lunch. Captain Bill’s double coronary bypass burger, anyone?

North Country Hunting, and How I Became a...

Roasted Rack of Venison in Cider Sauce… and...