During deer hunting season last fall, when Huntsman Stan mentioned that he’d had a success rate of 100% during the 2013 spring turkey season, I was a bit skeptical. I’ve seen firsthand how hard it can be to find those gobblers and bring them into gun range, and yet there was Stan, telling me he guided for turkey in multiple states for three whole months, and got at least one bird with every single one of his clients.

I had to find out for myself if he could really pull that off, or if he was just bragging. So the first weekend in May, off I went, all the way up to Pulaski for the fourth time in the last eight months (read about my previous jaunts here, here, and here). Guess how it went: 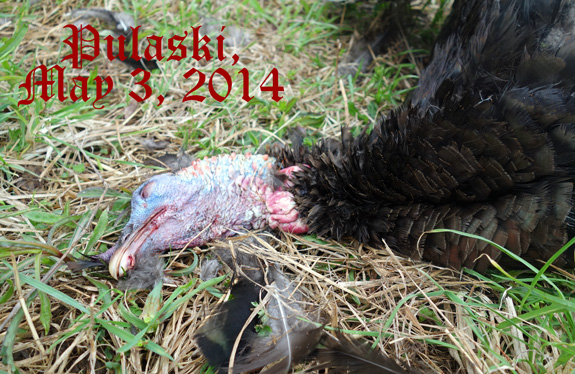 Stan hunts for turkeys the old-fashioned way. We got to a hunting blind way before dawn, with the plan to sit there, on the edge of a field, until we got a tom or the clock struck noon (the legal end time for spring turkey hunting). Since the woods were quiet, we didn’t even bother calling — we just waited. Between 7:00 and 8:00, we spotted two jakes at the other end of the field. Stan made a few soft calls, and we waited some more. There was dip in the field in front of us which affected our sight lines, preventing us from seeing the birds for so long that we almost thought they were gone. It took almost an hour for the two young gobblers to come up out of the dip, followed by a older tom, at which point they quickly converged on our decoys and started running around them. It’s quite amazing to see how such careful birds throw all caution to the winds for what they think is a chance to get laid. Even after I took a shot, they kept circling the decoys for a while as if nothing had happened! Well something had happened, and I went home with an 18 lb turkey.

Wild turkey is lean and tough, probably even more so in the spring when the birds have spent a whole winter looking for food to survive. What this means in the kitchen is that you either need to cook it for a very long time, or grind it. And add some fat. The result’s definitely more flavorful than the obese monster you probably bought last Thanksgiving, but it has to be prepared very differently, especially when you don’t have the skin (it’s much easier to skin a turkey than to pluck it by hand).

So for the time being I’ve given up on eating the breast whole, and decided to make sausages instead. Emulsion sausages, to be precise. I dusted off my old culinary school copy of Cooking Essentials for the New Professional Chef, and looked up the recipe for 5-4-3 emulsions. And since I had some leanings towards creating a Georgian recipe, I chose to use khmeli suneli in the seasoning. You can purchase some here (this brand contains marigold, as any good khmeli suneli should, I am told). This makes for a great sausage seasoning even if you don’t know where Georgia is or what Georgians eat. But if you prefer, replace it with about the same weight of other herbs and spices (thyme, cumin, coriander, anise, paprika, nutmeg, cardamon…).

North Country Hunting, and How I Became a...