My ice-fishing track record has been pretty disappointing this year. Disappointing as in not a single fish caught all season. Same as last year, come to think of it. I do feel like I know better what I’m doing: I read books, I talk to the locals, I sort of know where to look, I drill a lot of holes, I keep track of lake depth and structure. Sometimes I even see blips that look like fish on my sonar.

But all winter long, the fish didn’t bite. At least not my lines. Three times I’ve been to Saratoga Lake, reputed to one of the best fishing lakes in New York State — and got nothing. I spent a day on Lake George, dragging my sled though a foot of snow, struggling against incessant gusts of wind to prevent my gear from getting buried and my holes from freezing over — still nothing. Meanwhile, Outdoorsman Bill was parading on his web site with his daily bucketloads of perch and Putin-worthy pike.

I needed help. I wanted my own bucket of perch. So I made the five-hour drive to see Bill last weekend. 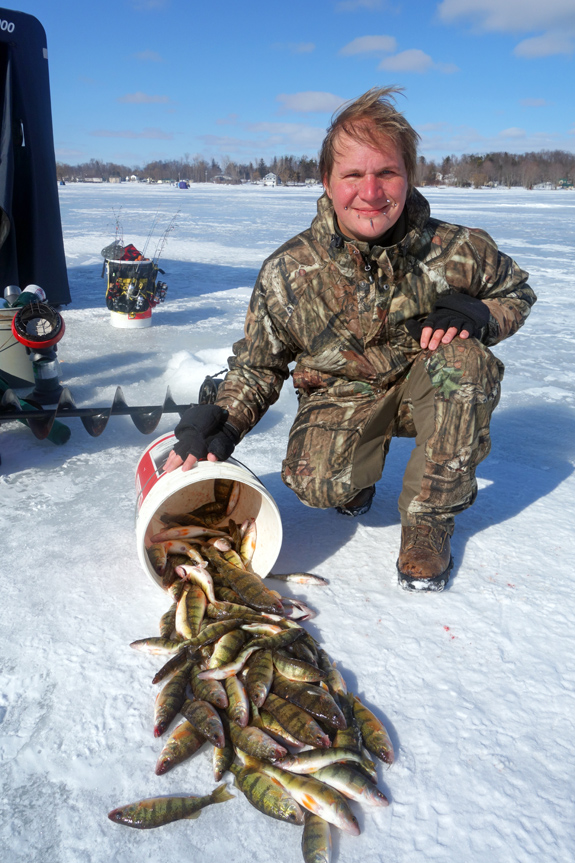 Bill took me to Sandy Pond on Lake Ontario. We unloaded our gear, walked to the middle of the lake, set up an ice shed, and drilled a few holes. As soon as we dropped our lines in the water, we started catching yellow perch, sometimes two at time! All this in the comfort of our heated shed, pretty much all day long, with the longest lull not exceeding 30 or 45 minutes.

As the season for walleye and pike ended on March 15, yellow perch was the only remaining option, but this wasn’t much of a problem. The limit for perch is a generous 50 per person, and we got our 100th fish around 4 pm. The action was so intense in the first hour that we didn’t even have a chance to get out of the shed to set up any tip-ups or tip-downs. When we finally did, though, we were rewarded with some nice perch doubles:

So what did I do wrong when I was fishing on my own? My line was rigged a bit differently, but I was using the right lures and minnows, so there should have been at least one perch stupid enough to bite anyway. Bill says that the sonar tends to scare perch in shallow water — so much for expensive electronics. I think that most importantly, you either know where the fish are or you don’t. Bill didn’t stop at a random point on the lake and didn’t need to spend his time studying lake contour maps; he knew exactly where he was going, even though there weren’t any other fishermen in a 100-foot radius. But Bill has an advantage: he lives and guides there year-round.

Although yellow perch has a pleasant, delicate taste, it’s rarely available in stores or restaurants. I suspect the reason is that it’s a hell of a lot of work to clean. A large 12″ perch yields less than 4 oz of cleaned fillets. If you have a smaller specimen, you’re better off just gutting and scaling it. Then there are the bones, which you won’t be able to remove completely. They shouldn’t be too noticeable after the fish is cooked, but there will surely be some. Finally, due to the time of year, I got a massive quantity of eggs. In fact, the roe often outweighed the fillets in many females! Perch roe may not be sturgeon caviar, but it’s enjoyable enough and it takes only 10 minutes to prepare. 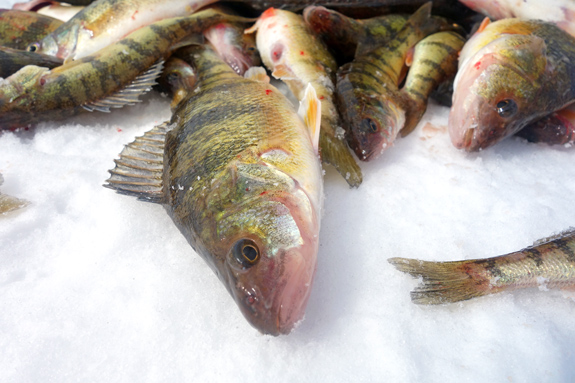 I wanted to create a recipe that takes care of both the big perch and the small ones, without being too complicated (Eastern European fish recipes are usually dead simple, and preferably use lots of oil). The large fish are filleted and gently pan-fried in butter, while the small ones are dredged in flour and deep-fried whole. In retrospect, perhaps I should have let the juniors go and just used minnows or whitebait, which you can eat in one bite, head and tail on, without worrying about the bones. I also generally like the idea of having more of the food chain on the same plate.

The cabbage side is great for people who don’t even like cabbage all that much, such as myself. Forget about unappetizing boiled cabbage that stinks up your kitchen for a week. This one is a vibrant green and tastes really good! 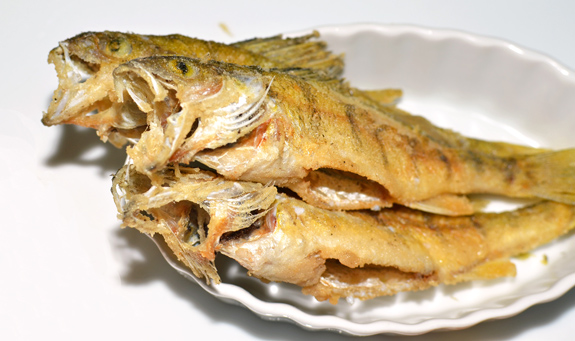 OMG,,,I didn’t see this my favorite fish 100 years,its exactly same like in Moldova,where I grew up I loved this fish,we did a lot of different dishes with fish,,I cant tell you how I wanna try it again,,yummy recipes,,you are awesome,good job..

Hey, I went through your blog and I must say that I love the way you cover Eastern European dishes and culinary traditions (I’m really looking forward trying to prepare your cured trout recipe this weekend), although I must comment that in most Eastern European cuisines, canola oil is rarely, if ever, used. The traditional frying medium in places such as Romania, the former USSR, and Central Europe (as far as oils are concerned) is sunflower oil, with olive oil being used in the southern Balkans,

That being said, this recipe makes me wish I weren’t living in the middle of the desert where you can’t find a fish with roe that isn’t prepackaged…

Hi mrcarrothead, you’re right about canola oil, an American invention. I use it because it’s widely available where I live, it doesn’t impart any flavor to the food, and it has a high smoke point. There are several other options — in fact, I regularly use extra light olive oil too.