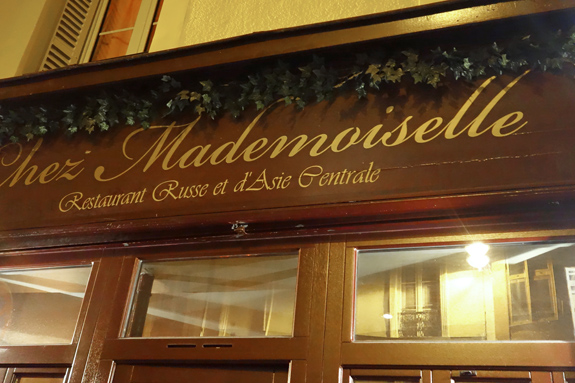 Paris: the Eiffel Tower, the Louvre… and the Kazakh restaurant, Chez Mademoiselle, in the 15th arrondissement. If you’re not convinced, think about this: where else will you eat Kazakh cuisine outside of Kazakhstan? Not in New York. I checked. So while in Paris, why not take a break from the charcuterie, cheese, and eclairs to try something different?

So what is Kazakh cuisine, anyway? As it turns out, most of Kazakhstan’s popular dishes are actually shared with Uzbekistan, with only slight differences in preparation. Kazakhstan favors horse and camel meats for festive occasions, apparently more so than its southern neighbor (horse meat is also found in recipes from Tashkent, but that’s because Tashkent is only a few kilometers away from the Kazakh border).

Chez Mademoiselle is a small family joint, run by Kazakh wife Joe in the kitchen and her French husband in the front of the house. If you want to make a reservation, they don’t always answer the phone, but it doesn’t mean they’re not open. Use their web site to reserve, and you’ll get a confirmation by email.

The short menu, which seems to vary slightly according to the chef’s inspiration each day, actually draws from various corners of the Empire. No, there’s neither horse nor camel meat, but everything is homemade. There isn’t a printed menu either, only a black board that circulates between the few tables as needed. During our visit, the dishes were mostly Russian (and Ukrainian), with a few Central Asian specialties. The eggplant Napoleon consisted of a stack of grilled eggplant, fresh tomato slices, and a kind of garlic cream. The eggplant and tomatoes were good. Everybody at the table agreed that the cream contained way too much garlic, to the point where it was really pungent, but also somehow strangely addictive. Avoid if you’re on a date. The manty (meat dumplings) were topped with red peppers and caramelized onions that really livened the dish, making it a bit sweet too. The meat and onion filling could have used some more fat, but the dough was very soft, which to me is essential for a good dumpling. 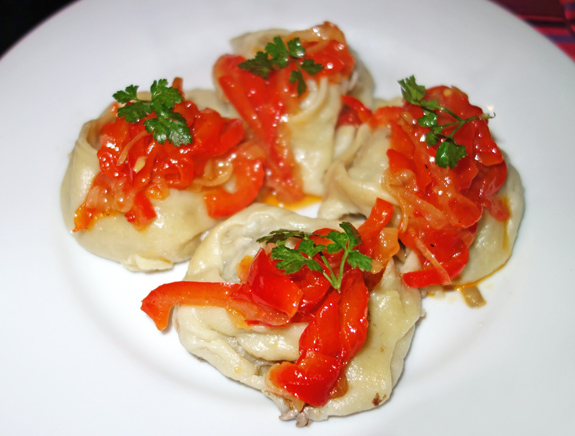 The beef Stroganoff was simple but tasty. Small chunks of very tender beef, simmered in a rich cream sauce with mushrooms and paprika, sat atop basmati rice. I highly recommend mixing the sauce with the rice. The plov was supposedly a typically Kazakh rendition of the Central Asian staple, with carrots, dried cherries, and basmati again (nothing wrong with using basmati in plov, even Stalik Khankishiev does it). From what I can tell, Kazakh plov is considerably less greasy than its Uzbek counterpart. While the rice was flavorful and quite spicy, the lamb chop on top was a little bit dry (although some of us may have gotten more tender pieces than others). The Russian stuffed peppers contained the same basmati mixed with meat. The meat was somewhat dry — this lack-of-grease thing seemed like a recurring theme. Either Kazakhstan as a whole, or just the owners of Chez Mademoiselle, don’t share the Uzbeks’ love of fat and kazans boasting puddles of grease. Luckily, between the moist red peppers and the carrot-onion broth, the whole dish tasted just fine when you had everything in one bite. Perhaps I’d add some more salt and spices though. 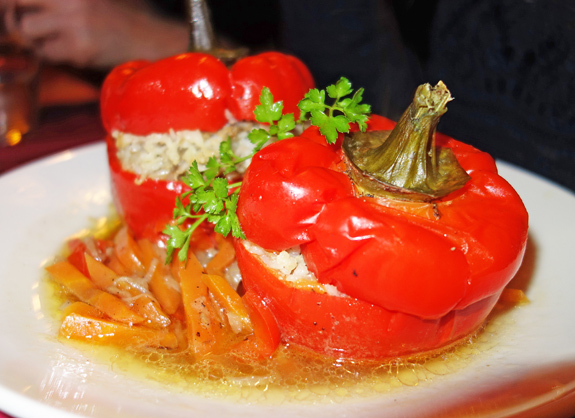 Chez Mademoiselle did a good job offering several Russian and other Soviet desserts. The cherry varenyky were really nice, with an unmistakable cherry flavor. 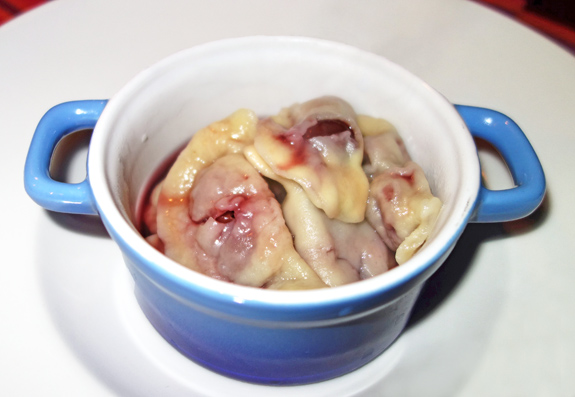 The oreshki — fake walnuts made of a kind of shortcrust pastry, filled with reduced condensed milk surrounding a piece of real walnut — were even better still. These delicious, rich, and sweet nuggets were a childhood favorite during Soviet times. Finally, Joe’s apple tart was also awesome. The frangipane tart topped with slightly caramelized apple slices and served with a side of sour cream wasn’t very surprising but tasted more complex than your regular apple pie. On the drink front, Chez Mademoiselle offers a small selection of French wines and a couple of plain vodkas, including Russian Standard. Overall, everybody in our party enjoyed the food and ended up happily drunk. I mostly wish there’d been a few more Kazakh dishes on the menu — how about a good beshbarmak and some chak-chak for dessert? Those accustomed to Uzbek cuisine might also consider coming with their own tin of rendered lamb fat to add to every dish, but hey, not everyone loves grease that much. Anyway, here’s your chance to eat like Borat, but with much better taste. 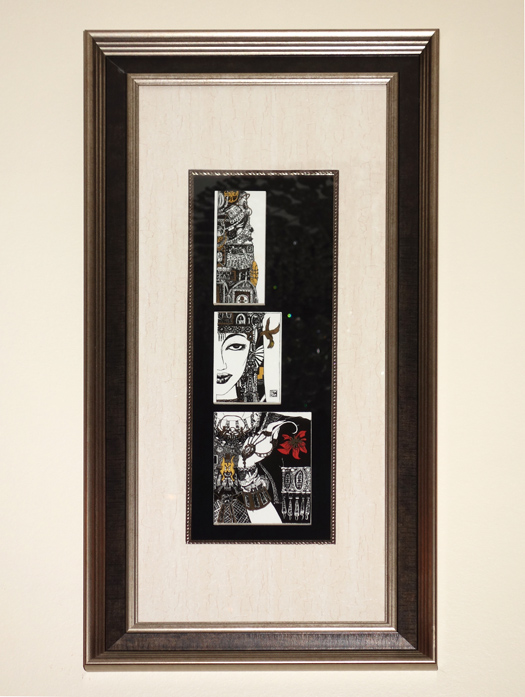 Great post and blog! Your pictures made me incredibly hungry!

Sounds good, Florian. Hope to try this place in the next couple of months. Thanks for sharing.

ps I’d love to hear about Slav restaurants in NYC or anywhere! I miss a great homemade pieroge.

Thanks! You’ve come to the right place, I’ve got tons of restaurant reviews 🙂