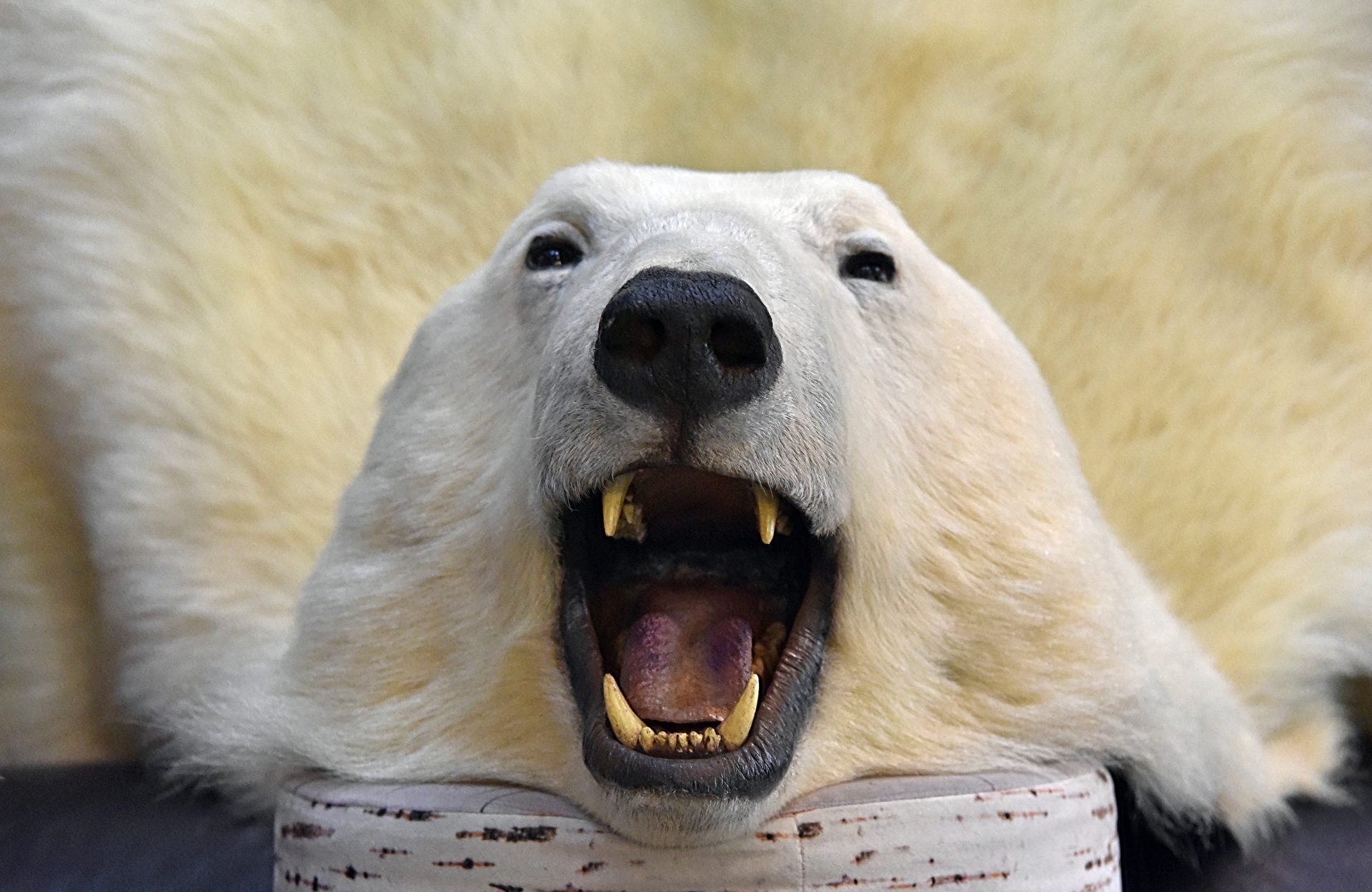 I’ve already reviewed a couple of Moscow restaurants specializing in Siberian and Arctic cuisine: Chemodan and Omulyovaya Bochka. But another establishment had actually paved the way, from as early as 2002: Expeditsia.

Back in the early aughts, during a trip to the Polar Urals, one Alexander Kravtsov and his friends got stranded hundreds of kilometers from the nearest settlement, with no means of communication, waiting for a helicopter that hadn’t arrived. As the days went by, the group had to figure out how to fend for themselves and survive in this harsh environment. A man unafraid of clichés, Kravtsov started thinking about the meaning of life, the living conditions of his ancestors, and survival in the Arctic in general. He also vowed that if he returned to Moscow alive, he would open a unique restaurant to commemorate the expedition, and he would create everything “with his own hands” (whatever that means). The helicopter eventually showed up, and Expeditsia was born. The restaurant’s logo still crystalizes this life-changing moment.

I visited Expeditsia (“expedition” in Russian) in Moscow’s Tagansky District for the first time in 2019, and I’m surprised it took me so long. I remember it being on my to-do list as far back as 2006, but it always fell through the cracks. Over the years, the place has become an institution, patronized by celebrities and politicians alike. The ostentatious interior might have something to do with it. First, there’s the main room with its actual helicopter (another reminder of the foundational expedition), its trees, and its stuffed animals. Not enough for you? Try the VIP hall, set in a replica of an ice cave with a chandelier that resembles the skeleton of an exotic fish. Still not satisfied? A hunting lodge on the roof, with an open hearth, is as close as you can get to the Russian Far North without leaving the center of Moscow!

Then there’s the menu, which offers platters of Siberian fish and game meats that are as expansive as they are expensive, plenty of small plates to make your own zakuski table, high-end plated dishes (i.e. protein-sauce-side combos rather than single-ingredient plates), and a dozen home-made flavored vodkas. Siberian and Arctic cuisines help urban New Russians fantasize about that wild Russia so often promoted by the country’s macho leader, and there’s nowhere in town where you’ll find a broader selection. Tasting the whole menu would require many visits and very deep pockets indeed, so in this post I can only give you a glimpse of what’s cooking.

Expeditsia has also grown to be more than just a restaurant, and offers everything the New Russian needs for a perfect day in the capital: a sauna, a food shop, and even a shop of miscellaneous expensive stuff (think mammoth tusk sculptures and rosaries, jewelry with gold nuggets and diamonds, seal skin boots, hunting knives, assault rifles, and miniature versions of military vehicles).

The food shop is what interests us. In addition to selling to-go portions of all the dishes of the restaurant, it offers a wide array of Northern charcuterie, cured fish, savory pies, pelmeni, vegetable conserves, fish preparations in jars, game pâtés, and game stews. In the pictures below, you can see sockeye salmon mousse with oranges and caramel, fried vendace in tomato sauce, scallops in mustard sauce, calamari with ginger and sesame, whelk, and king crab, among other things.

And now, into the restaurant room! Let’s start with the flavored vodkas. To be clear, these are of course made by infusing vodka with either actual herbs and roots or fruits (mostly berries), not by adding artificial flavoring. They can be ordered in flights of 6 to 14 full-size shots (it’s still Russia, after all), the latter being called “the heavy artillery” on the menu. Here are my tasting notes for the following flavors:

My favorite of the lot is the the horseradish vodka, which is quite surprising to me because in the past I’ve often declared horseradish vodka undrinkable. As my tolerance to super-bitter liquors increases, I’ve also come to appreciate the Taiga bitter, especially because it’s not sweet (the combination of sweet and herbal instantly brings a grimace to my face).

The “polar barge platter” is Expeditsia’s frozen Siberian fish extravaganza, accompanied with two shots of vodka. Served on a block of ice decorated with berries and algae, it includes: stroganina of muksun, nelma, sockeye salmon, and scallop; sterlet rubanina; nelma indighirka. As everything except the indighirka is traditionally eaten with one’s hands, we are given a little spray of pure alcohol to clean our hands first (a practice that has since lost all its exoticism because of COVID-19). There are also lemon wedges, dill sprigs, and three “dips” for the fish: a dry mix of salt and pepper, a thick dip made with soy sauce, and a lingonberry-mustard sauce.

Siberia’s answer to sushi, stroganina consists of thin shavings of frozen fish. The menu claims that if you have a bite of stroganina every time you drink alcohol during the whole dinner, even if you mix your liquors, you won’t have a hangover the next day. (Probably because you’ll have thrown up everything in your stomach way before morning?)
The problem with stroganina is that frozen fish doesn’t have much flavor. Scallop fares better and actually tastes great, but the three fish are kind of all the same, even the salmon. Adding dill, lemon juice, and soy sauce does make them more flavorful, but I still prefer sushi.

The indighirka is a Yakut salad of diced frozen fish with onion, and once again the frozen nelma is rather bland, so the salad tastes mostly like onion. It’s served on a bed of purple algae. As for the rubanina, another salad of sliced or diced fish with onion, I unfortunately can’t find any trace of it in my pictures!

The “game bag platter” consists of over a kilo of game meats cooked on the grill and served with stewed potatoes, lingonberries, and a kind of reduction sauce.

The shashlyk of roe deer is the highlight here, cooked medium rare and very tender, with a mild gamey taste. The meaty deer heart is a bit dry but pretty good too, especially when dipped into the sauce. The deer liver, on the other hand, is overcooked.

Unfortunately, the marinated elk is cut like scaloppini and way too cooked, like a bad steak with a nondescript taste. Elk is one of the largest deer species and elk meat offers the opportunity for thick, large chunks of every possible cut, so what’s the point of serving thin slices? It also looks like the partridge was replaced with duck breast. I love magret, but it’s not quite the same!

The sauce that goes with the meats reminds me of a reduced meat stock, maybe with red wine and a hint of berries.

The stewed potatoes, with cream on top, are potato slices cooked for a long time, a bit like a potato gratin but without the shape. Oven-roasted garlic heads and onions complete the vegetable sides.

Is Expeditsia’s heyday behind it? Maybe. The food is uneven and overall I’m not that impressed. It’s certainly not worth the price (slightly under $100 for the polar barge, slightly over for the game bag). Still, all those large platters look so gorgeous that I’ve borrowed a few pictures from the web site. We can admire them below and maybe get some inspiration for future posts.

The polar barge: see details above.

The fish stringer: grilled muksun, nelma, sturgeon, sockeye salmon and fried scallops and whelk; served with eagle fern and lemongrass sauce (and apparently some vegetables too).

The game bag: see details above.

I’ve once again made a list of all the ingredients that were mentioned on Expeditsia’s menu, and sorted them into categories, separating savory dishes and desserts. Even if I have my reservations about the food, the place should still be commended for its menu: how many restaurants do you know that serve 25 different dishes with deer, 7 with moose, 11 with muksun, 11 with scallops, or 8 with porcini??? Some pairings come back over and over: lingonberry and game meat, porcini and potatoes. Others are more original, such as a crab-duck breast-omul caviar salad, deer pelmeni in an aromatic fern bouillon, or elk-cabbage-porcini in a soup served with a potato tartlet.

Many of the dishes are simple affairs (a reflection of Siberian and Arctic cuisines): stroganina, rubanina, indighirka; salt-cured, cold-smoked or marinated fish; aibarch (thin strips of raw reindeer, traditionally dipped in the warm blood of a freshly killed animal though this isn’t really doable at a restaurant), air-dried or cold-smoked meat, dried sausage; fish or meat aspics; marinated vegetables; fish or meat soups and savory pastries, either together or separate; fish or meat pelmeni; fish or meat cutlets; fried or baked fish; grilled meat; berries in pies, preserves, and sorbets, or just by themselves with pine nuts, honey, or condensed milk; pine nut cake and bird cherry cake.