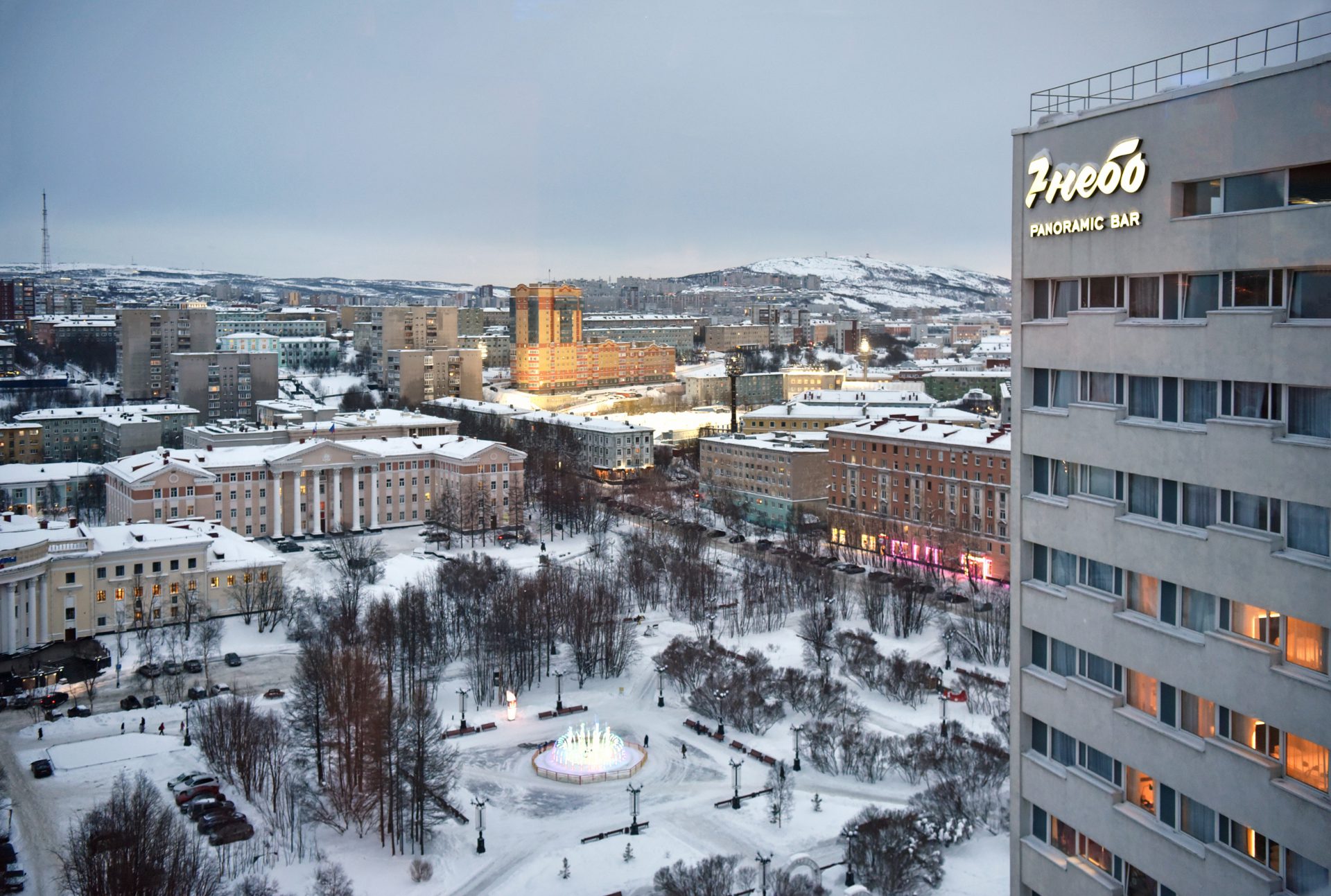 When I talked about the Lake Lacha area in a previous post, I shared my relative distaste for Russia’s provincial cities. Murmansk follows the half-day tour + Soviet relics + ugly suburbs formula to a tee. At least, unlike Arkhangelsk, it has an excuse for its limited touristic appeal: it’s a fairly recent city, the last one founded in the Russian Empire, in fact. In 1915, WW1 motivated the construction of a railroad from Petrozavodsk to an ice-free location on what was known as the Murman Coast so that Russia’s allies could ship military supplies. The Murman station soon consisted of a train terminal, a port, a naval base, and a settlement with a growing population. In 1916, the settlement became a town named Romanov-on-Murman. Then, after the February Revolution of 1917 and the fall of the Romanov dynasty, the town was given its present name (the -sk suffix in Russian being used to form adjectives, Murmansk is the “City of Murman”).

But what is that Murman Coast exactly? The name no longer appears on maps, but it’s the historical designation of the northern shore of the Kola Peninsula. Here’s a bit of history… While the region was already settled in the 5th millennium BC and saw several peoples’ migrations, by the 1st millennium AD only the Sami people remain, engaging mostly in reindeer herding and fishing. Then, as we have noted, in the 12th century the Pomors discover the Peninsula and explore it all the way to Finnmark, the northernmost part of Norway. From that point up to the 15th century, Novgorod and Norway alternate border arguments and periods of peace, while the Sami people are forced to pay tribute to both sides. Russians call Norwegians “Murmans”, a distortion of Normans. Later, the name is transferred to the land itself, designating first the coast of the Barents Sea, adjacent to Norway, and then the entire Kola Peninsula.

In 1471, the Novgorod Republic loses control of the Peninsula to the Grand Duchy of Moscow. Disputes with Norway continue until 1582, when a Russian voivode (a kind of warlord) is appointed to provide for better defenses of the Peninsula. The town of Kola (located a few kilometers south of today’s Murmansk) becomes the administrative center of the region. In the 17th century, the Pomors launch naval expeditions to Svalbard and Novaya Zemlya. But despite the economic activity (based on an abundance of fish and game), permanent settlement doesn’t intensify until the second half 19th century and later the creation of Murmansk, whose size soon surpasses Kola’s.

The Soviet period on the other hand sees a rapid increase in regional population, mostly in towns along the sea coast and the railroads. The Peninsula becomes heavily militarized and industrialized due to its strategic position, the creation of hydroelectric plants, and the discovery of apatite deposits and other minerals ripe for mining. With the creation of the Murmansk Trawl Fleet and the development of related infrastructure, the fishing volumes increase dramatically. The Sami people are subject to forced collectivization of their reindeer herds and relocation to centralized settlements.

The economy takes a major hit with the collapse of USSR, but starts to rebound in the 2000s. Today, the Kola Peninsula is the most industrially developed and urbanized region in northern Russia. Mining, fishing, and the energy sector still constitute the basis of its economy.

And now, back to Murmansk. Half-day tour: the town center with Five Corner Square (formerly Soviet Constitution Square), Lenin Nuclear Icebreaker, Church of the Savior on the Waters, and Regional Studies Museum. Soviet relics: Rodina movie theater, Palace of Culture, Alyosha monument towering over the city, and a bunch of less imposing monuments – to the Joint Struggle of the Anti-Hitler Coalition Countries, to WW2, to the Conquerors of the Arctic, to the Sailors Who Died in Peacetime, to the Lost Fishermen, to the Seaport, to the Yermak Icebreaker, to the Exploration of the Barents Sea by Nikolai Knipovich, to the Hero City, to Lenin, to Kirov, to local WW2 hero Anatoly Bredov, to Valentin Pikul…

And then there’s a monument to codfish.

Located in the central park near to Five Corner Square, this rather unusual sculpture illustrates the historical importance of cod (and fish in general) to the region’s economy, and even its culture – Pomors were nicknamed cod-eaters, after all. Fish is also present on the city’s coat of arms: upon a background of dark blue and gold (dark blue for the polar night and gold for the bountiful sea), a fish symbolizes the area’s main industry, a ship reminds us that Murmansk is a major seaport, and the aurora borealis emphasizes the city’s geographical position beyond the Arctic Circle.

We saw that historically, among the Sami people, fishing was complemented by reindeer herding. In Soviet times, the traditional Sami herding practices were phased out in favor of the more economically profitable Komi approach, which emphasized permanent settlements over free herding. The collectivization efforts of the 1930s led to the concentration of herds into farms, which were then further consolidated into a few large-scale operations from the late 1950s to the early 1970s. Eventually, there remained only two state farms, based in Lovozero and Krasnoshchelye. Head to Murmansk’s Regional Studies Museum, and you’ll see paintings and photographs of Sami reindeer herdsmen.

Reindeer may no longer be an important economic resource, but they remain one of the region’s main cultural symbols. One appears on the coat of arms of Lovozero (the main Sami settlement today), along with a fish. And every year since 1934 in the Murmansk suburbs, there’s the Festival of the North, a kind of Polar Olympics featuring ski and skating competitions, plus swimming and, as the climax of the event, a reindeer race.

On the menus of Murmansk’s finer restaurants, reindeer is everywhere. I’ll dedicate another post to some of my best meals, but as a taste of things to come, here are a couple dishes served at the Azimut Hotel Murmansk, formerly Hotel Arctic, opened in 1984 and the still tallest building above the Arctic Circle:

With its unique position as a transportation hub that combines a port on the Barents Sea, a train station, an airport, and the area’s only highway, Murmansk is the perfect base whence to explore the Kola Peninsula. After our tour of the restaurants, we’ll pack ourselves into a tiny taxi with a grumpy driver to visit the real wilderness.