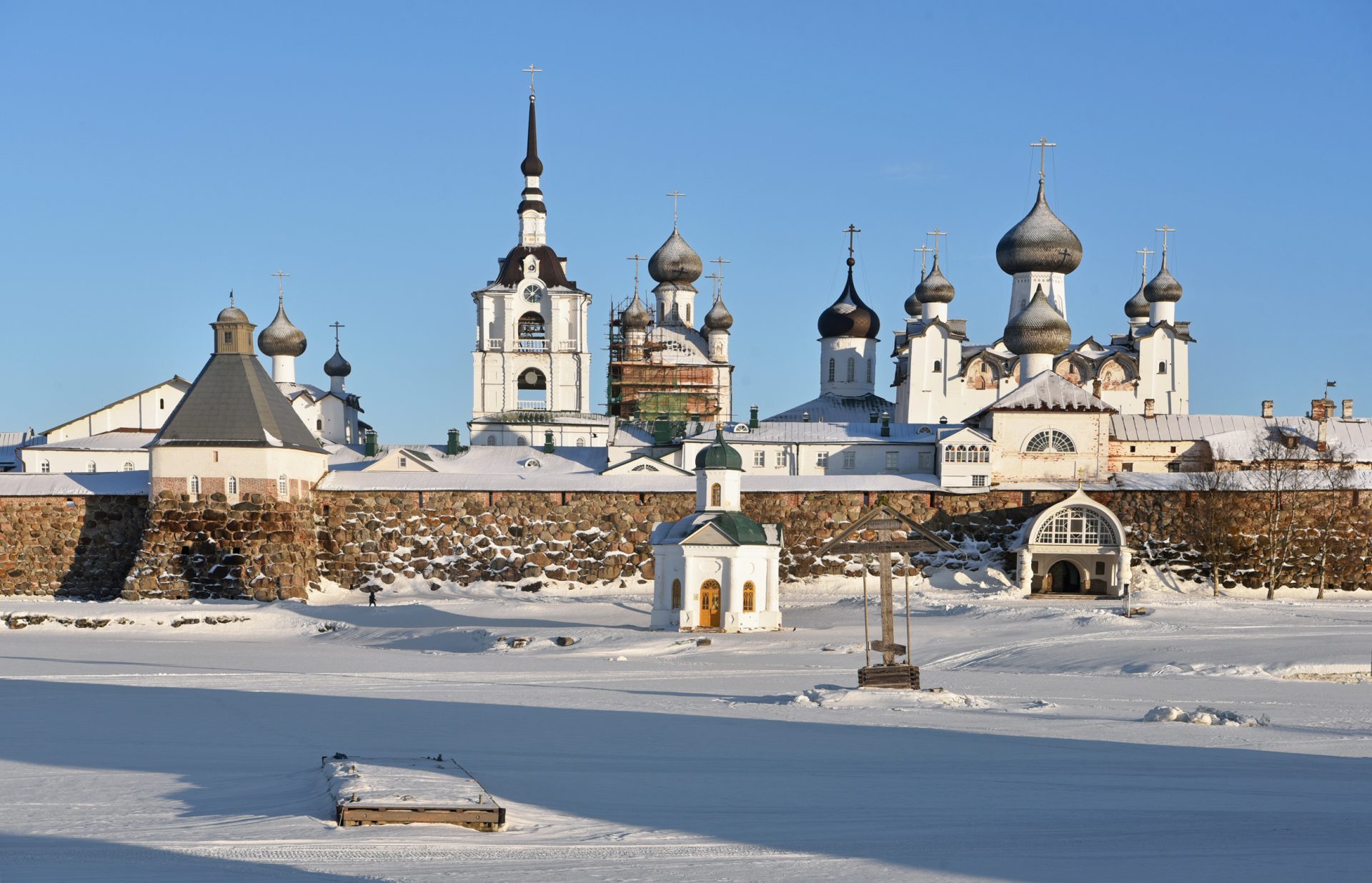 Reading my post on Arkhangelsk a couple months back, you might’ve been wondering: “What the hell is he doing in that sh**hole?” Especially for someone who’s been all over Russia dozens of times, it didn’t take a crystal ball to figure that Arkhangelsk would probably suck. And between its boring city center, the daily traffic jams, the lack of taxis, two days of almost constant winter rains turning the whole place into a skating rink, believe me, it sucked big time. But the provincial capital was never the end goal. Neither was my visit to nearby(ish) Lake Lacha. After all, although the latter did turn out to be a fantastic choice, there are other lakes and abandoned villages in Russia, and other places where you can go on a snowmobiling trip. There is, however, one fascinating destination that’s only accessible from Arkhangelsk in winter: the Solovetsky Islands, or, like everyone calls them, the Solovki.

This archipelago of half a dozen islands, located in the middle of the White Sea, has been home since the 15th century to the impressive Solovetsky Monastery, one of the most significant religious institutions in Russia. After the October Revolution, the monastery was closed and became the Soviet Union’s first forced-labor camp, the SLON (слон) – an acronym for Solovetsky Special Purpose Camp (fun fact: slon also means “elephant” in Russia). Throughout the 1920s and 30s, more and more prisoners were stacked in the converted monastic buildings, whose understated “special purpose” was mostly starvation, torture, and elimination, under the pretense of wood logging. This antecessor of the Gulag is described at length in Solzhenitsyn’s The Gulag Archipelago. In 1939, because of WWII and the camp’s proximity to Finland (and the islands’ geographic inadequacy at actually logging wood), it was closed and turned into a naval cadet school. After the collapse of communism, a small brotherhood of monks was re-formed, and the complex was extensively renovated. Today, Orthodox believers come for pilgrimages, and tourists come to visit both the monastery and the SLON museum.

But that’s in the summer, when a boat connects the main island to Kem on the mainland. In the winter, the islands are only accessible by plane. From Arkhangelsk.

And that’s quite a flight. As the only passengers are monks, workers tasked with repairing the airport landing strip, a local or two, and the occasional eccentric tourist, the aircraft is a small propeller jet that doesn’t fly every day. It brings everything: aforementioned people, mail, fresh food (mostly fruit), and other products to re-stock the humble stores (more on that later). This is when the plane can land, that is. Due to its small size, it’s susceptible to the winds that often blow on the White Sea, and flights can be canceled until further notice, sometimes for several days in a row. We learned this the hard way and got stuck for two extra days, like foreign agents held prisoner at the pachydermic Gulag, serving an unknown sentence. At least we can say we visited one of the world’s last wooden airports…

In summer, boatloads of tourists fill the hotels, restaurants, and excursion tours. In winter, it’s a beautiful but pretty desolate place once you’ve completed all your touristic visits. The phone and internet services are spotty at best. There’s only one hotel open, half of it under renovation, the other half empty save for us and a handful of airport workers waiting for an apartment or a flight home. No TVs in the rooms – or anywhere else for that matter. As far as I can tell, on a normal day, there are only two places where a visitor can eat: the hotel’s “restaurant,” where a set meal (no menu) must be ordered in advance, and in the evenings a nearby café that serves as a cafeteria for the airport workers and has a few extra portions for anyone else who happens to wander in. Think chicken, kasha, rice, boiled potatoes, thin broth, and canned vegetables drowned in mayo. The café also carries desserts from the local bakery.

Then there’s a couple of small grocery stores, with a very limited selection because the locals typically take a boat trip to the mainland in late summer to stock up on everything that’s non-perishable for 6 months. As a result, they only go to the stores here to buy baked goods, dairy, cured meat, and the newly-arrived produce – you should see the line when the plane brings bananas and oranges!

Visitors like us shuttle regularly between the Solovki Settlement Hotel and Store # 3 to ensure an uninterrupted supply of vodka and bad Georgian wine from open to close. It’s got its own charm, that Store # 3. There’s a woodfire stove to heat the room, and it’s close enough to the hotel that you can even go there without putting on your coat. They also stock local vodka (from the Arkhangelsk region) for 5 dollars a bottle, and you can pay with your phone’s digital wallet! Though, like in the old days, you have to get all your items through two sales clerks that serve you at the speed of snails – and just where are you rushing to, anyway?

For everything else, you’ll have to either wait until summer or negotiate with the neighbors. You smoke? Exit the hotel, enter the first building on the right, climb to the last floor (aka the second floor), find a certain door on the left, etc. There are no cigarettes officially for sale on the island.

Yet being stuck in the Solovki gave us a chance, between two bottles of vodka, to participate in three essential events of the insular life: the mass, the disco, and the ice fishing contest. As you can imagine, participants don’t necessarily overlap.

The evening mass in the dark, candle-lit Holy Transfiguration Cathedral inside the quiet monastery, surrounded with praying monks repeating the same incantations over and over, is an amazingly atmospheric experience. There’s a service every day and anyone can attend, we just hadn’t the time to fit it into our original schedule.

The disco, a restaurant dining room with people dancing between tables, is a bit more exclusive. Supposedly it takes place only once or twice a month, and it’s recommended to reserve a table. For the locals, it’s the only entertainment in town. For winter tourists, it’s an unexpected treat; it’s the only place that offers dinner à la carte, and seems to be open only once a month. Even if you have to eat in the dark to the sound of loud Russian pop (with such hits as “Alkogolichka“), served by a waitress who makes it clear this is her least favorite night of the month (perhaps because it’s the only night she has to work), for once you won’t eat food reminiscent of your high school cafeteria. In fact, I think our meal tasted quite good, although the dancing and semi-sweet shampanskoye that followed obliterated any precise memory of it.

But the ice fishing contest is the one event that’s hardest to catch – it happens only once a year!

One late February morning, every local with an auger and a fishing rod congregates on Bolshoe Korzino Lake, a few kilometers away from the town center on the only road that runs across the island. Unlike the mass or the disco, the ice fishing contest is a family event. The adults fish, the children make snowmen, and then everyone eats an ukha (fish soup) with the day’s catch. At the judges’ table, there’s a prize for everyone: heaviest fish, lightest fish, longest fish, shortest fish, most fish caught, youngest fisherman… And if that’s not enough, there’s a raffle where all the participants can win a prize!

Many locals have their own snowmobiles and drive them to the lake, towing sleds filled with their gear. Some of the airport workers join the tournament in a van. Having neither a snowmobile nor a van but plenty of time to kill, we decide to get to the lake by cross-country skiing. By the time we show up, most fishermen are ready to pack and have lunch. No giant pike on the score sheet, just a lot of perch. Maybe that’s the lake’s only fish – it sure is the easiest to catch. Time to go eat some ukha!

The ukha is a simple affair: water, potatoes, and whole perch, cooked in a cauldron over a wood fire, next to the big teapot heating water for black tea. The fish are then taken out of the soup, and everyone fills a bowl with broth and grabs a couple of perch and a slice of bread (the Solovki bakery makes very good black bread). No vodka – Solovki’s police officers are in attendance!

By early afternoon, the party is slowing breaking up. Everyone’s happy: the weather was nice, the fish were biting, and the soup was good. “Come back in the summer,” people tell us. I disagree: I prefer the snowy landscapes and quiet town to hot weather and hordes of noisy tourists. We strap on our skis and head back to the hotel to enjoy another school cafeteria meal and a few bottles of Store # 3’s finest vodka.