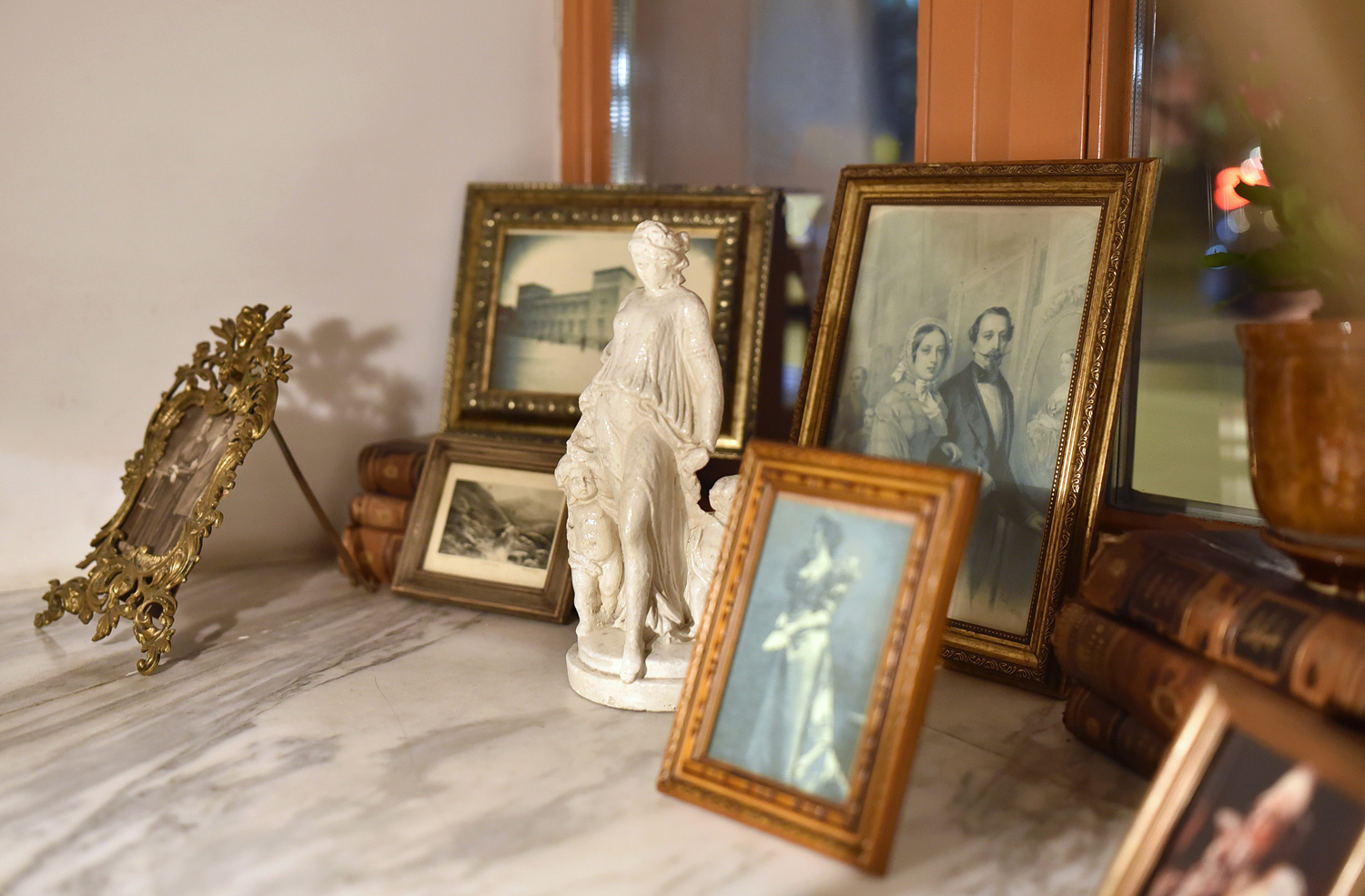 After my post about Omulyovaya Bochka last week, let’s continue our exploration of Siberian cuisine through another Moscow restaurant. Located in the Arbat District, Chemodan (“suitcase” in Russian) is part of the trend of celebrity-owned eateries that arrived in Moscow in the early twenty-tens. If you follow Russian cinema a little, you might remember actor Oleg Menshikov for his roles in Burnt by the Sun or The Barber of Siberia. Well, speaking of Siberia, as Menshikov was visiting the town of Krasnoyarsk several years ago, he dined at a restaurant called Chemodan, owned by one Dmitri Stepanov. This establishment is now closed (catch a glimpse of it on TripAdvisor), but at the time it impressed our Muscovite enough that he decided to partner with Stepanov to launch a similar concept back in the capital.

Moscow’s Chemodan opened in late 2011, and, probably thanks to Menshikov’s connections, quickly attracted the elite of the Russian art scene. The restaurant holds private tables for film and stage actors Mikhail Yefremov and Konstantin Khabensky, and classical musician Yuri Bashmet. Politicians, too, have taken notice; even former Soviet leader Mikhail Gorbachev has been spotted eating there.

So why, you may wonder, would a famous actor fall in love with a restaurant with less-than-stellar reviews, in Bumblefuck, Siberia, in a town known more for its aluminum plant and its dam than for its dining scene? My guess is that for Menshikov, the restaurant Chemodan allowed him to stay very much in character. The Barber of Siberia takes place in the early 1900’s in Imperial Russia, some of it in Siberia. The 2006 Russian TV adaptation of Doctor Zhivago, in which Menshikov plays Yuri Zhivago, is partly situated in Yuriatin (a fictional name for the town of Perm), in western Siberia. Even Burnt by the Sun was set at the dacha of a former aristocratic family in the 1930’s.

So Menshikov dug into his silver screen image, and transplanted to Moscow the original concept of Siberia meets Imperial Russia – with a few improvements. And he didn’t do things halfway: as you enter the restaurant from the tree-lined boulevard, you step back to a time when there was still a real tsar and furniture wasn’t made of plastic. Old lamps dimmed by thick lampshades, framed photographs, antique clocks, old books scattered on shelves, thick curtains in the windows, lace on the tables, embroidered pillows on the chairs… The cozy decor makes you feel as if there’s a snow storm raging outside and you have to wait it out, drinking some heartwarming homemade cordial, while someone plays “Lara’s Theme” on the balalaika.

Restaurateur Stepanov, on the other hand, brings his impressive collection of Siberian recipes and his unique address book to purvey an amazingly broad assortment of Siberian delicacies that you’ll be hard-pressed to find anywhere else. Brown bear, red deer, roe deer, reindeer, elk, polar partridge, wild boar, yak, muksun, nelma, omul, sterlet, tugun, broad whitefish, eagle fern, bird cherry, cloudberry, lingonberry… it’s all on the menu, which claims to consist of dishes from the Yenisei province in the 19th century. And you’ve got about fifty appetizers and salads, twenty main courses, and a dozen desserts to choose from! There are Siberian specialties such as saguday (sliced raw fish mixed with sliced onion, salt, and lemon juice or vinegar, and only minimally marinated) or stroganina (raw fish, thinly sliced while frozen). Some Russian classics are interpreted using interesting recipes, such as cold wild boar roast (buzhenina in Russian) with whole grain mustard, schi with sauerkraut, red deer, and porcini, or a Salad Olivier from an 1897 Krasnoyarsk recipe book, made with guinea fowl, veal, beef tongue, capers, gherkins, and quail egg mayonnaise. Finally, from the many Siberian game and fish dishes, in addition to the ones I’m going to talk about below, here are a few interesting combinations: nelma smoked on cherry and currant branches, with young currant shoots and creamy mushroom sauce; elk steak with grilled taiga fern and lingonberry-onion sauce; Altai wild boar shashlyk with cloudberries, sauce of Baku tomatoes, and pickled onions; Altai roe deer skewer with honey-glazed onion, blackberry, and red wine sauce.

But let’s get the meal started with a plate of homemade pâtés of farmed rabbit, reindeer liver, and Altai red deer, all served with toast. Actually, the red deer was 86’d, so we got some polar partridge pâté with apple instead. All three have pretty much the same texture, closer to mousse than actual pâté (I wonder if they’re mixed with whipped cream or egg whites). The tastes, however, are very different. The rabbit is the lightest and the mildest, really a mousse with a slight taste of white meat – that’s farmed rabbit to you. The partridge, probably a mix of meat and liver, is shaped into quenelles, sprinkled with ground black pepper, and topped with pieces of apple cooked in red wine that go rather well with it. It comes out very good; quite light and still pretty mild. The last one, reindeer liver topped with tart redcurrant, boasts a strong liver taste that’s a bit too much for me but will satisfy true liver lovers.

The meat of Altai roe deer, marinated with thyme, cooked on an open fire, and served with a blueberry sauce, has a great gamey taste but feels a little dry. It should be cooked a little bit less, even though it’s served cold. Looking at my pictures now, I wonder what happened to the blueberry sauce. A casualty, perhaps, of the long and winding restaurant menu?

On the same plate, we’ve got the reindeer tongue, grilled and served with horseradish, mustard, and sun-dried tomatoes. When I see reindeer tongue on a menu, I just have to order it – when will I have another chance to eat that? The tongue is sliced and very slightly grilled. It’s a bit similar to beef tongue, but smaller and more tender. Really tender and moist, in fact. It almost looks marbled, while keeping the texture of cooked tongue. The taste is much less pronounced than the roe deer above, which is probably to be expected for tongue. This ends up being my favorite appetizer!

The grilled, juicy meat of Altai mountain yak, with a tomato, mustard, and caper sauce, arrives cooked rare, just like I ordered it. Excellent meat, very tender. The cut looks a bit like a hanger steak. The taste is stronger than beef though not super strong, and it’s augmented by the char from the grill. The tomato sauce on top is good, but I don’t need tomato sauce with my steak. I like the idea of the caperberries on top, though. The side of boiled and grilled potatoes with dill is just okay.

The cutlet of Sayan brown bear with lingonberry cream sauce, buckwheat, and porcini doesn’t live up to my expectations, unfortunately. Firstly, it tastes pretty mild, with just a slightly stronger aftertaste, and I want my bear meat to be more flavorful than that! Then the cutlet, a mix of ground meat and onion, is rather average as far as patties go: really massive, a bit too cooked, not airy enough. The buckwheat kasha with mushrooms tastes good, and so does the sauce, but placing the kasha between the meat and the sauce is impractical: it’s the meat that needs sauce for moisture.

The moose steak with fried taiga ferns and lingonberry-onion sauce is not actually a steak at all, but another cutlet. It’s not terribly different from the bear patty: it arrives less cooked, and there’s onion inside too, plus some herbs. While I like it better, the taste isn’t particularly distinctive either – for all I know, the cook could be combining beef, pork, and farmed venison in various proportions and pretending each recipe is a different Siberian wild animal. I do like the cream sauce with sautéed onions, whole berries, and minced chives. The bed of ferns under the cutlet adds a nice extra Siberian touch, even if ferns are never gonna be among my favorite vegetables.

While we didn’t try any desserts, the list is as substantial as the rest of the menu. There are several cakes, including classics like medovik and Siberian bird cherry flour cake as well as more obscure recipes such as the “Poor Jew” cake, made of three different layers of poppy seed, walnut, and raisin sponge, with condensed milk (note: this was before the recent kerfuffle over an industrial ice cream of the same questionable name). There are also berry sorbets, plombir ice cream, blini, and various preserves (young pine cones, cloudberry, gooseberry, honeysuckle, pumpkin with walnuts…).

The drinks list is similarly exhaustive. Starting with non-alcoholic, there are about a dozen herbal teas, and three different kinds of mors – sea-buckthorn, lingonberry, and cloudberry. The cloudberry mors has a subtle but very pleasant taste. It seems somewhat expensive for what it is, but then it’s also a bit of a rarity. Plus, I imagine you probably need to boil a ton of berries to produce just one glass. The sea-buckthorn mors is very good; it really tastes of sea-buckthorn, and it keeps the acidity of the berries with just a small amount of sweetness.

Supposedly, Chemodan is the only place in Moscow where you can try traditional yerofeich (a very strong vodka served ice cold and meant to be drunk in one gulp) and ratafiya (a milder yerofeich, flavored with fruits or roots) made from classic 19th century recipes. We tried quite a few spirits, and the cumin yerofeich is my favorite. It goes particularly well with black bread, especially the Borodinsky kind: drink the yerofeich, then eat some bread, and you taste the spices in the bread much better. There’s also a number of flavored vodkas, many of them flavored with berries (cranberry, lingonberry, honeysuckle, bilberry, blueberry). I won’t get into details, but all the versions that we tried were very good.

If you prefer wine, there’s an okay if expensive list, but the highlight is the section dedicated to old Soviet wines. Maybe you’d like to try a 1933 Kagor (a sweet red mysteriously named after Cahors) or a 1955 Xeres, both from Massandra winery in Crimea? Buy a bottle for a thousand bucks, or fifty dollars will get you a 5-centiliter sip. In my (limited) experience, these are very sweet, fairly ordinary dessert wines that greatly benefited from aging for over half a century, but whether they are worth the money is up to you.

Chemodan is worth a visit both for its decor and its dishes, even if the preparation of the latter isn’t always faultless. The number of menu items that you’ve never eaten or even seen before boggles the mind. I’d probably recommend the steaks and kebabs over the ground meat dishes, and I’d love to go back to try some of the fish. Should you happen to have a party large enough, there are banquet dishes that sound exciting but need to be ordered in advance: sterlet stuffed with porcini, roasted leg of deer, wild ducks baked with honey and apples, stewed polar goose…

To continue my sketch of the ingredient space in Siberian cuisine, I’ve once again made a list of all the ingredients that were mentioned on Chemodan’s menu, and sorted them by categories, separating savory dishes and desserts. The prominent ingredient groups are very similar to the ones at Omulyovaya Bochka, with more variety within each group – more fish, more game meats, more types of berry. The vegetables are also extremely diverse, probably much more so than what actually grows in Siberia!