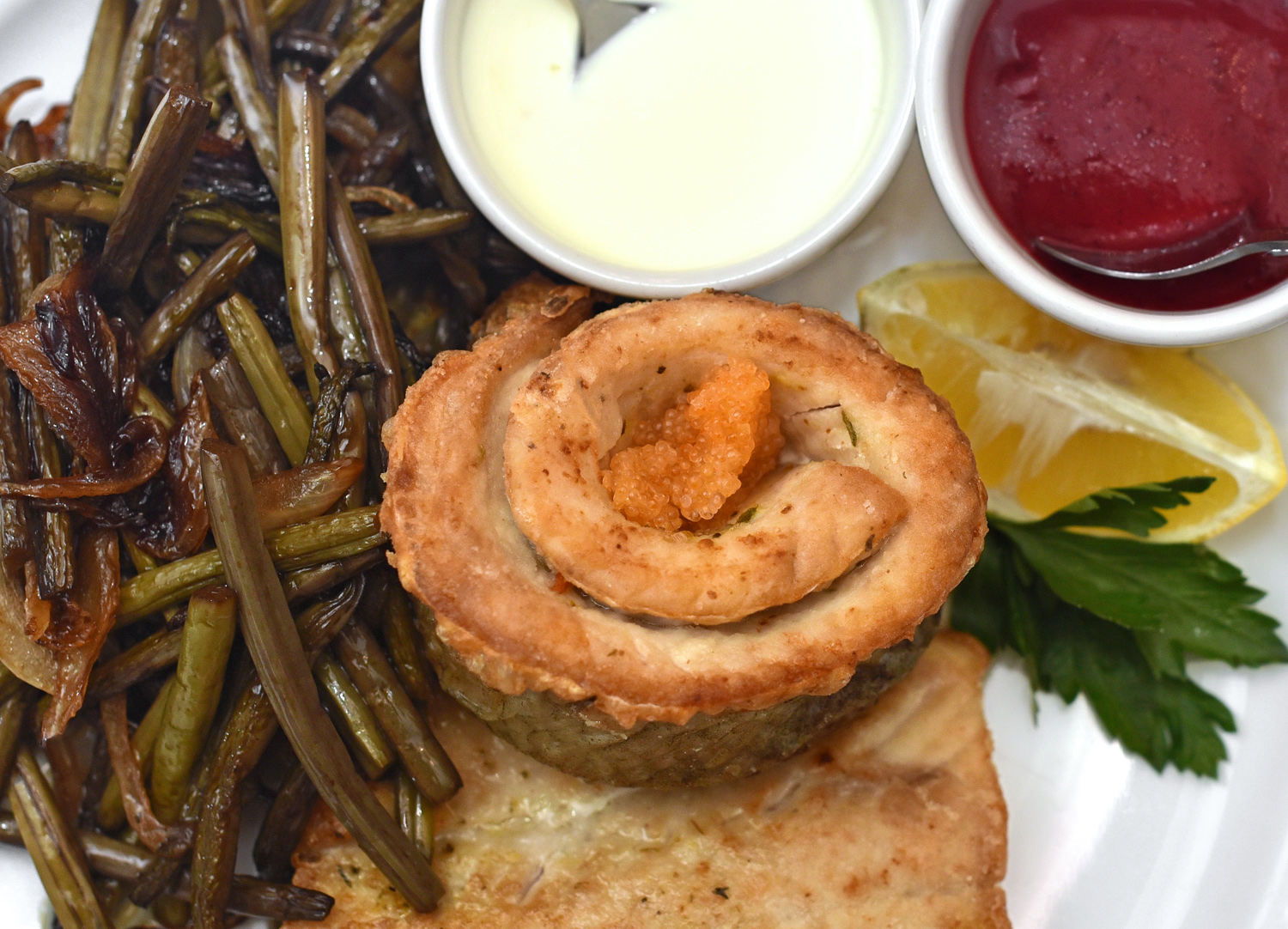 According to some sources, one of the food trends for 2018 was set to be Arctic cuisine. Scandinavian food has found its place at the center of the food stage for a number of years now, but some food trend forecasting think tanks such as Culinary Tides, maybe in a bid for attention, decided to jump the shark and push the trend further North. Between a few bargain basement food psychology statements, we learn that there will be increased interest in fermented fish and pickles from the region, that Arctic dishes “align with our newfound interest in plant proteins, gut health, and seasonal cooking,” and “seafood is overall healthier than meat, so the Arctic trend is still going strong.”

I think some fact checking is in order. First off, focusing on Scandinavia for Arctic cuisine is ill-inspired, and not just because there are already well-established Scandinavian and Nordic cuisines. The vast majority of Scandinavia is below the Arctic Circle and the vast majority of the Arctic is not in Scandinavia – half of the Arctic population is located in Russia, and the Russian Federation and Canada account for nearly 80 percent of the land. Then, farming is extremely difficult in the Arctic regions, and edible plants are scarce – people eat berries, the roots of various tundra plants, and a few herbaceous plants. The staple of the Arctic diet is meat, whether from land animals (reindeer, muskox) or sea mammals (seal, walrus, whale). So much for the abundant plant proteins and healthy seafood… What we normally consider seafood (since I’m guessing your local supermarket doesn’t carry seal meat) consists of a few fish like cod or Arctic char, and the occasional crustaceans such as crabs or mussels. And I have further trouble understanding how such a diet might epitomize gut health or seasonal cooking. So, yeah, if you ask me, this “trend” is probably to Arctic cuisine what Nanook of the North is to an actual documentary.

Russia, in fact, seems like a more suitable place to search for Arctic cuisine. I’ve already touched upon the subject when I talked about LavkaLavka and Teriberka, and I’m hoping to get back to it in the coming months. But even without crossing the Arctic circle, there’s a part of Russia that exhibits very similar culinary habits, except for the sea mammal part: Siberia. Siberian cuisine is enjoying increasing popularity in Russia, and Moscow counts several Siberian restaurants. Brush off mental images of political prisoners starving to death in gulags; this is all about going back to nature and to simpler times. In a country where cities and their dwellers’ lifestyle changed so much and so fast in the past decades, Siberia has become a phantasmal place where nature and traditions have been preserved. For men, Siberia is also the epicenter of manliness – just check out Putin’s vacations. How convenient it is when one can just hop on the subway to go eat a boar cutlet with a shot of homemade cordial! We’re going to take a look at two Moscow eateries where you can do just that, starting in today’s post with restaurant Omulyovaya Bochka.

There are three popular fish in Siberia’s waters that are considered delicacies, all whitefish species of the salmon family:

Omulyovaya Bochka, located on Moscow’s Pokrovka Street, features all three of these fish prominently, and in fact generally focuses on seafood. Its name, meaning “omul barrel,” refers to a legend from Lake Baikal wherein a magic barrel owned by two wind deities has the power to attract omul when thrown in the lake.

I have found very little about the restaurant itself or the people who run it… The building, which used to house a hair salon in the 1980’s, was gutted in the late 1990’s and then rebuilt in a similar style with a couple more floors, and as you can see I’ve got some cool pictures of that. As for the restaurant’s current interior, the underwhelming decor, with its muted blue and beige tones, tall curtains and slipcovered dining chairs, feels somewhat bizarre, and this impression is accentuated by the completely empty dining room. (Anyone following my Moscow Rules series will be unsurprised.)

But let’s dive into the menu. Many dishes revolve around a few ingredients: the three fish I’ve mentioned, venison, ferns, and berries. The cold appetizers, for example, are mostly cold plates of sliced fish (raw, cured, smoked) or sliced meat (deer meat, tongue, pork fat), plus the inevitable pickled vegetables. The salads often mix familiar salad combinations with these same ingredients, but there’s also a less familiar salad of jerked venison, tongue, and ferns with Siberian dressing and fresh vegetables. Pelmeni have their own section, and are filled with a blend of ground deer meat, veal liver, and ferns, or a blend of omul and muksun. The list of soups is quite generous, with borscht, schi, vegetable cream soups, and several fish soups. Then we have a dozen fish main courses (the same fish, fried, steamed, baked, en papillote, in cutlets, in pies, with various sauces) and slightly fewer of meat (meat stews, sautéed meat, veal steaks, cutlets, deer and reindeer with lingonberry sauce). Finally, the desserts include a few cakes, blini, ice cream, and several options with lingonberries, pine nuts, and honey.

Some of the dishes are typically Siberian or Northern Russian, and little-known elsewhere. Stroganina is raw fish, thinly sliced while frozen – a sort of Siberian sashimi. Gorlodyor (which means “screamer”) is a pungent sauce made of tomatoes, garlic, black pepper and salt. Saguday consists of sliced raw fish mixed with sliced onion, salt, and lemon juice or vinegar, and only minimally marinated. Skoblyanka is an old Russian dish that could stand as Russia’s answer to Quebec’s poutine: fried potatoes tossed with sautéed meat shavings and a mushroom sauce. The bird cherry cake is, well, a cake made with bird cherry (a small berry with a large pit that’s dried and turned into a flour, pit included) and often finished with cream layers. Pine cone preserves are made with young, soft pine cones, and are supposed to have all kinds of medicinal properties. I also spotted a couple of Buryat dishes: bukhler (a lamb broth with chunks of meat, herbs, and sometimes vegetables) and pozy / buuzy (meat dumplings, see my recipe here).

The assortment of Northern fish includes (clockwise from the top right in the picture below): lightly salted omul, lightly salted muksun, cold-smoked muksun, and lightly salted Atlantic salmon. The omul is the best of the assortment; its taste isn’t very pronounced, but its texture, quite firm and  fatty, is very pleasant. The lightly salted muksun is like the omul, but a bit less everything (firm, fatty, tasty). Both are cured perfectly with just the right amount of salt. The smoked muksun is similar but differs by its smoked taste, of course. In fact, it tastes mostly like smoke, which makes it good but not great. Russia has some fantastic cured salmon, and this is a good example: not too fatty but very with a great salmon taste, and again just the right amount of salt.

The nelma stroganina, shavings of raw frozen nelma, arrives on a cold block to keep it frozen. Nelma has a subtle taste that’s pretty good for a freshwater fish. Although I understand the benefits – once upon a time in Siberia – of freezing food to keep it longer, this isn’t necessarily a great gastronomical idea here, as it doesn’t really help emphasize the taste of the fish. The dish comes with soy sauce, and dipping the stroganina in it thaws it almost instantly, which is good as long as you don’t mind the taste of soy sauce. Overall, I’d be happier with a nelma sashimi.

The Baikal rybnik is an omul fillet with aromatic herbs baked in thin dough, says the menu. Inside the puff pastry, the fish is topped with a julienne of zucchini, slices of onion and tomato, and herbs. It’s not as good as the one I ate at LavkaLavka, but still commendable.

The Omulevaya Bochka is a substantial fish plate with two types of pan-fried fish, omul and muksun, garnished with a little bit of white fish roe and a wedge of lemon, and served with a “taiga sauce.” I can’t tell you what a taiga sauce is, just that we got two ramekins: a white sauce and an unidentified berry sauce. Unfortunately, both fish fillets arrived overcooked and dry. We ordered a side of ferns sautéed with onions, and I wouldn’t say I’m crazy about them, but they’re interesting – and not in a bad way!

In addition to the usual full bar, Omulyovaya Bochka offers a variety of teas with berries and herbs, a few flavored vodkas (horseradish, lingonberry, juniper…), and some house-made fruit drinks. The sea-buckthorn mors tastes great and isn’t too acidic – for a sea-buckthorn drink, that is.

Overall, my meal at Omulevaya Bochka was quite good and fairly original, combining traditional Siberian food with careful plating. Once again, I’ve made a list of all the ingredients that were mentioned on the menu, and sorted them by categories, separating the savory dishes from the desserts.
What makes these results particularly intriguing is that since the menu is fairly long and this is more of an ethnic restaurant than a “cheffy” restaurant, we should be getting a good image of Siberian cuisine.

A few ingredients come back a lot, perhaps because there aren’t that many foods growing in Siberia: deer, veal, the Siberian fish, potatoes, mushrooms, ferns, cream, pasta dough (and other doughs), lingonberries, pine nuts. Some of the local ingredients are combined in interesting pairings: smoked muksun, potatoes, and apples; veal liver and ferns (in pelmeni); omul and porcini.