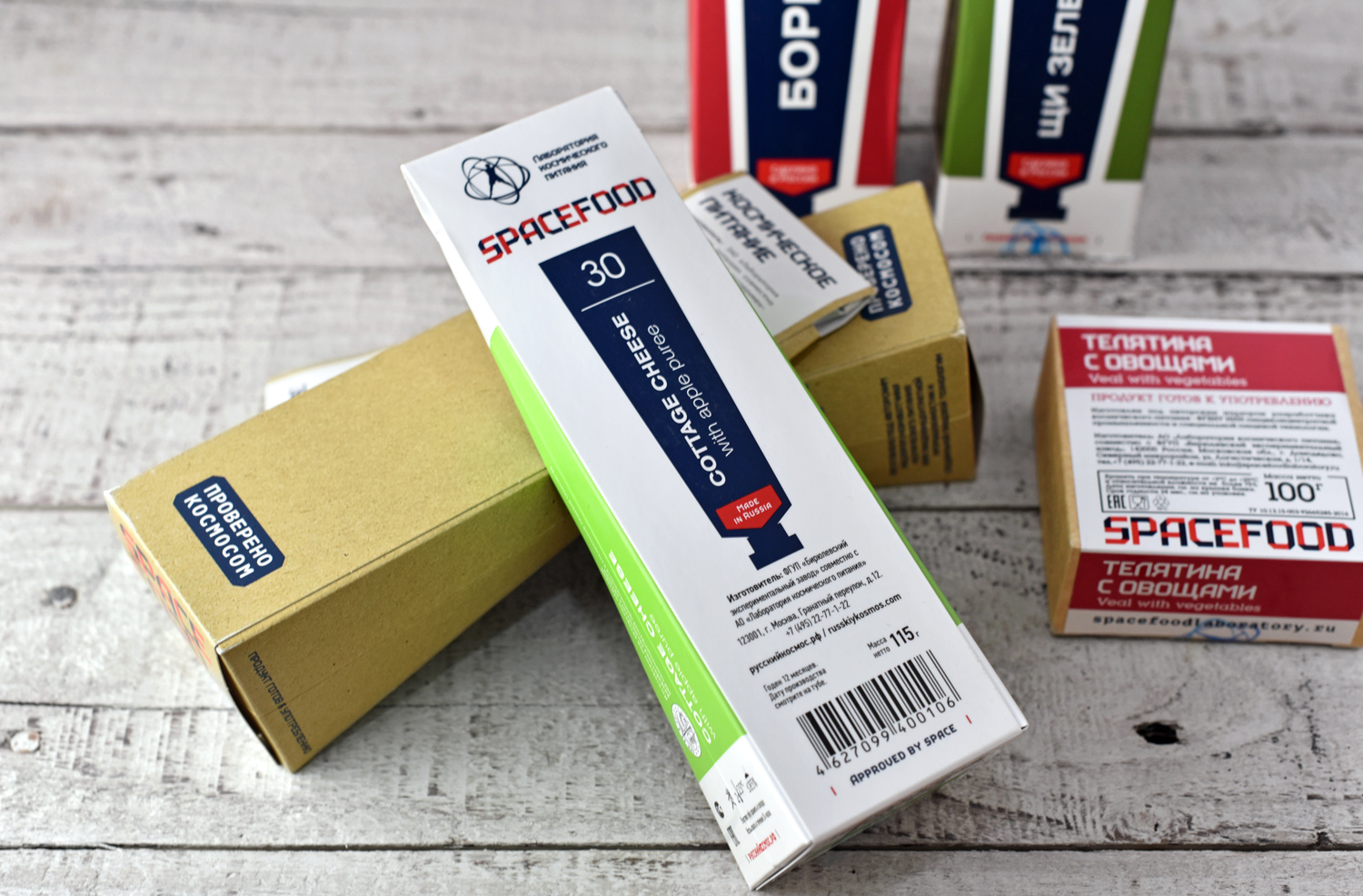 Quite logically, being the first to send a man to space, the Soviet Union invented space food. During his historic flight in 1961, cosmonaut Yuri Gagarin ate from toothpaste-style tubes containing servings of puréed meat or chocolate sauce, for example. Shortly after that, Gherman Titov became the first human to experience space sickness, and won the dubious distinction of being the first person to vomit in space.

Later on, once the USA joined the club, food tubes were abandoned for lighter, freeze-dried food. By the 1970s, larger living areas on space stations like Skylab allowed for on-board refrigerators and freezers, and astronauts had access to over 70 food items, from shrimp cocktail, to fresh bread, to ice cream (the real thing, not freeze-dried). What they enjoyed the most was spicy foods, as head congestion from weightlessness tends to dull the senses of taste and smell.

The USSR lagged a bit behind in terms of space food. In 1975, when the combined crew of the Apollo-Soyuz Test Project dined together, the foods provided by Soyuz 19 included canned beef tongue, packaged black bread, and tubes of borscht and caviar (I admit I’d choose tubed caviar over shrimp cocktail, if only out of curiosity). As part of the Interkosmos space program, allies of the Soviet Union actively participated in the research and deployment of space technologies, and the Institute of Cryobiology and Lyophilization at the Bulgarian Academy of Sciences adapted traditional Bulgarian dishes such as tarator, sarma, musaka, lyutenitza, and kiselo mlyako.

Fast-forward to the 21st century, and Russian space food is now praised for being more savory, natural, and diverse than its American counterpart (with the side effect of Russian cosmonauts clogging American toilets on the International Space Station, as explained in this article). The Russian crew has over 300 dishes to choose from. Here’s a sample menu for the crew’s commander (according to the same article):

While I’m glad that spacepersons can now enjoy real food like the rest of us (but with less sugar and more nuts, it seems), space food has certainly lost some of its quirky cachet. Luckily, there are companies such as the Moscow-based Space Food Laboratory.

The Space Food Laboratory (check out their new website in both Russian and English here) claims to offer “legendary space food,” “created on the basis of the fundamental achievements of leading domestic research institutes and famous scientists,” specifically designed “for the courageous and brave explorers of space.” Their food does not contain any superfluous ingredients, as “the limitless Cosmos does not tolerate excess and wastefulness.” Every aspect of the products has received special consideration: not just formulation, but also appearance, taste, natural ingredients, and even environment-friendly packaging!

In practice, this means mostly old school space food, of the Gagarin variety, sold on the internet and in tourist-heavy places with some connection to air or space travel (including Sheremetyevo airport and the VDNKh), so you and your gullible offspring can relive the early days of space exploration – which is still more than what can be said about those American freeze-dried ice cream sandwiches that were most likely never consumed on any actual space missions.

The borscht is orange in color rather than the more typical red or pink. At first it tastes mostly like meat and vegetables (and the ingredients confirm that it contains beef and various veggies), but the expected beet taste kicks in a bit later. A closer look also reveals tiny pieces of beet. The borscht has the texture of a chunky purée, and the water separates a bit, which is to be expected for food that can be kept in its tube for up to 12 months.

The green schi – a cabbage and sorrel soup – is quite similar. It’s maybe more acidic (an effect of the sorrel, I guess), but otherwise it’s the same as the borscht (vegetables, meat), minus the beets, plus the sorrel (which is hard to recognize at first, though I can see speckles of herb).

There are also some less exotic canned meat stews. The veal stew is quite good if a little bit thick – the sauce is really more like a chunky vegetable purée. I clearly see and taste carrots. The meat is cut into small dice and cooked almost to a tender mush. It remind me more of beef than veal. Here’s a recipe I concocted to combine it with the soups:

Heat the veal stew, and bring the schi and borscht to room temperature. In the center of a hot plate, place a small mound of veal stew. Garnish with alternating spoonfuls of schi and borscht purées. Sprinkle the schi with chopped parsley, and the borscht with sweet paprika.

In any case, it’s all much better than I expected! I find the taste very decent, but that might be because I thought it would be terrible. I’m not gonna start buying space food for my daily meals, but I had no problem finishing my plate.

Now on to the sweet tubes, all the options consist of tvorog mixed with fruit purées – apple, blackcurrant, or sea-buckthorn. Once again, I’m surprised: all of them actually taste like their respective fruits! The blackcurrant and sea-buckthorn varieties each have a pleasant color and a pretty strong fruit taste, in fact. The apple is both too sweet and too mild. Texture is more of a problem here, as liquid dissociates from the tvorog more than with the savory soups, and runs sporadically from the tube. What comes out doesn’t look smooth; it helps to keep the tubes open upside down for a while, to get some liquid out.

On a cold plate, alternate small dollops of blackcurrant, apple, and sea-buckthorn tvorog. Smooth the dollops with your fingers if needed. Decorate with some walnut halves.

Each tube and can of space food comes with a little moist towelette that’s made with 70% alcohol. I wonder if the cosmonauts sucked on the towelettes to get drunk – I know I sure would.

It turns out space food is really no worse than most airplane food. So sit on your couch, put on an old space movie, suck on a tube of puréed Russian food, rinse it with a 70% alcohol towelette, and imagine the sensation of being the very first human in space!