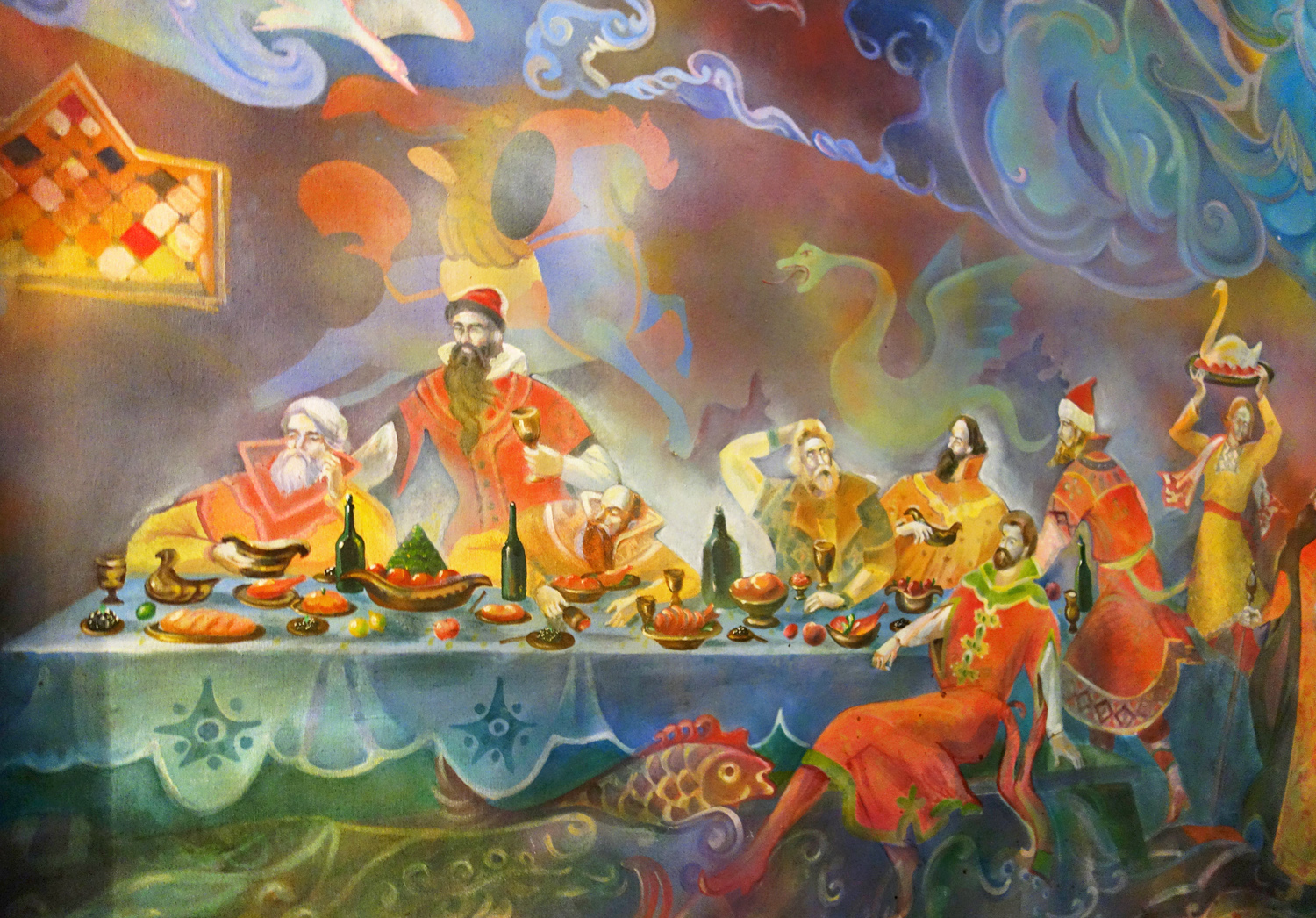 Far away from the hype of New York’s incessant restaurant openings and closings lies a disregarded culinary genre, that microcosm, the caviar shop-cum-restaurant. Several of the big players have or have had one such establishment. The smaller ones (such as Olma or the now-shuttered Calvisius) are happy to simply offer their caviars on blini, with smoked salmon and crab accompanied by a few select wines. Others pull out all the stops, if only by late-20th century criteria: opulent and slightly dated decor, neighborhoods where hipsters wouldn’t be caught dead catching their Uber car, a Michelin-courting New American-ish cuisine mostly defined by its propensity to put caviar on everything and anything as long as it’s served with Champagne, and prices fit for expense accounts. The two flag-bearers of this movement are Petrossian, which I reviewed last year, and Caviar Russe, the subject of today’s post. (Russ & Daughters appears to be the exception to the archetype, as its café actually is a trendy spot, but then that particular institution is famous for much more than its caviar.) One might think, with a name like Caviar Russe, that this restaurant would deserve my full review treatment, but it is not, in fact, a Russian restaurant. Like Petrossian, it’s an “expensive ingredient” restaurant. 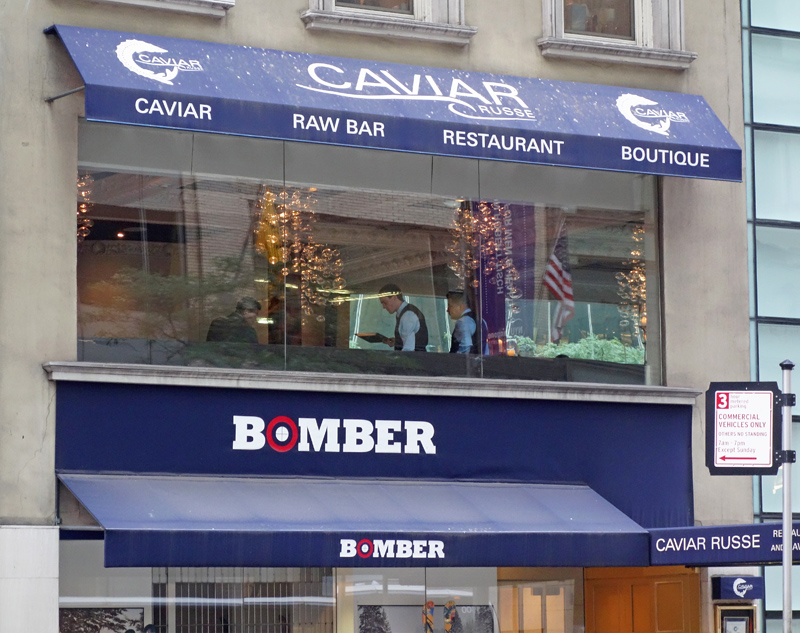 Apparently, Caviar Russe is the largest caviar importer in the United States. With restaurants now in both New York and Miami, they’re sure to have New Yorkers covered all the way into retirement. The NYC branch, situated in Midtown East, occupies the second floor of a small building on Madison Avenue. Modestly described on the web site as a “jewel box boite”, the small dining room seats only about twenty people, and its decor features several colorful paintings seemingly inspired by Russian stories and fairy tales, slightly reminiscent of Palekh miniatures but a whole lot bigger. 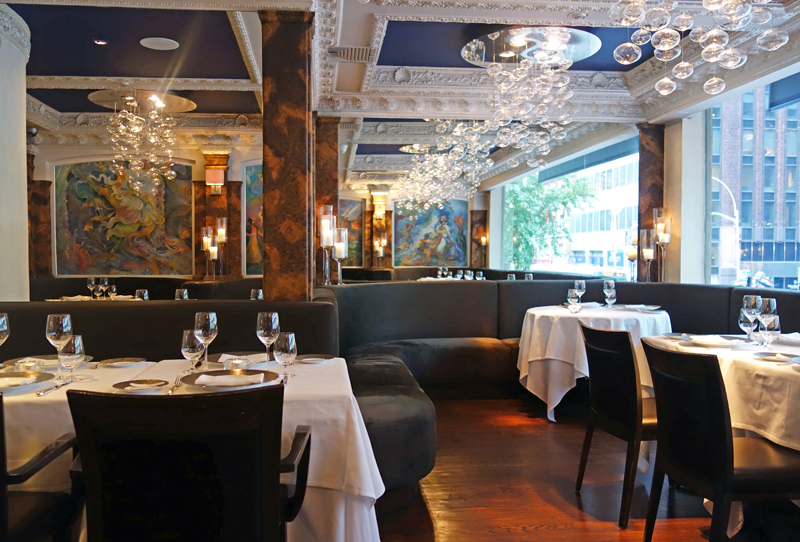 Back in 1997, the New York Times gave Caviar Russe two stars (“very good”), waxing lyrical about the pleasures of eating caviar by the spoon, unadorned, at any hour of the day, with or without company, at the bar or at a table. At the time, spoonfuls of caviar (the smallest amount available on the menu) cost $4-7. Today, they range from $12 to $120. The NYT does not review the place anymore.

Michelin, however, still does. The restaurant boasts one macaron, and the menu reads accordingly. In the universe of your meal, white asparagus, duck, foie gras, quail eggs, sea urchin, oysters, scallops, king crab, lobster, and of course caviar, seem to be the only ingredients available at the market. All delicious indeed, though a bit cliché. The menu comprises essentially three sections: a lengthy caviar selection, a choice of crudos all topped with caviar (plus a steak tartare), and a tasting menu that’s also available à la carte. And there’s the Signature Caviar Tasting Menu, “6 spoons of our finest caviar followed by a 6-course menu paired with 10 gr. of caviar per each course”. You’ve been warned: caviar on everything and anything, with a penchant for spoons. 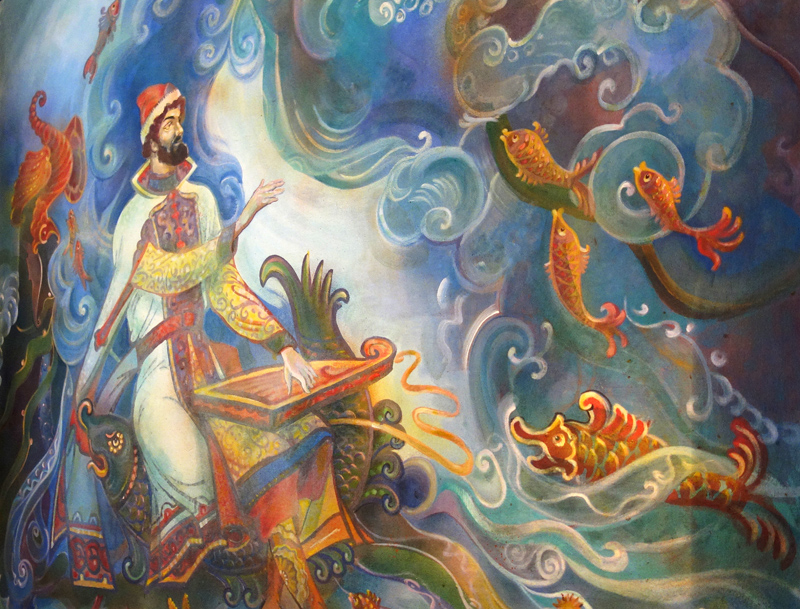 This being a Red Alert, I’ll be focusing on the dishes that can claim some kind of Eastern European influence. But before we get started, the bread and butter are well worth mentioning. Yes, seriously! The mini baguette arrives warm and actually seems to be baked to order, which is much rarer than you’d think. The butter takes you straight back to the farm, and the salted butter has a pleasant farmy taste. If you insist upon going through the bizarre American ritual of downing a whole bread roll and an ounce of butter before your meal, there are few places better than Caviar Russe to do so. 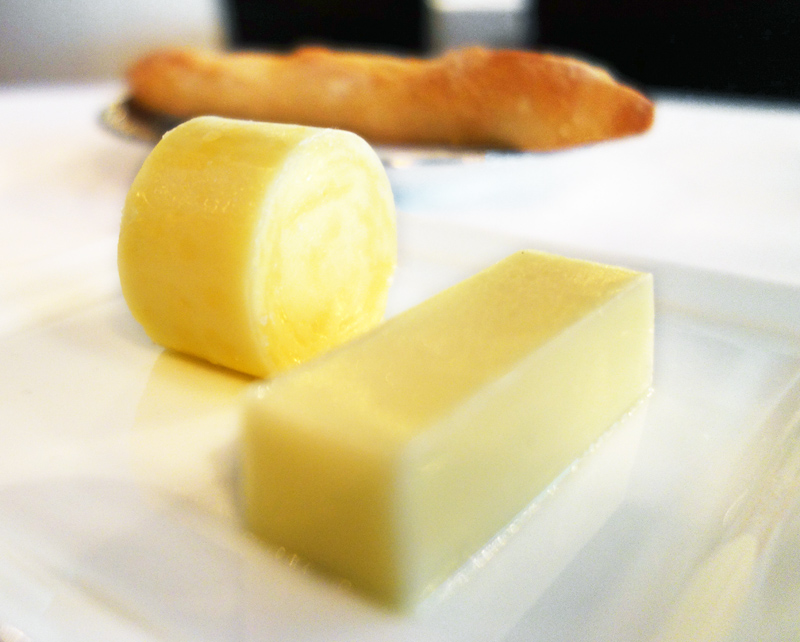 The almost-affordable farmed Pacific sturgeon caviar, while not the best, is quite nice, delicate and not too salty. Don’t you hate it when waiters brings you two tiny pieces of toast to eat your cured fish and roe, forcing you to ration yourself to avoid waiting 10 minutes for a refill? Caviar Russe feels your pain. Here, not only do you eat caviar by the spoonful, you eat bread by the plateful. For what is pompously called a purse but is realistically just a big spoon (not even a tablespoon, mind you) of caviar, you get a dozen toasts, half a dozen blini, and as many potato slices. The blini are a bit too sweet to my taste — I enjoy a hint of sweetness, but this is too much. The toasts work best with the roe because the toasted flavor complements the caviar very well. I wouldn’t even try the boiled potato, as potato tends to mask flavors. Add to this some accompaniments of cream and chives, though I don’t think caviar needs chives.

It’s worth noting that the caviar is served at the same price for which it’s sold at the store. That’s right, no markup whatsoever. (Hear that, Russ & Daughters?). The only caveat is that the menu only lists the sturgeon caviar, not salmon or paddlefish roe. 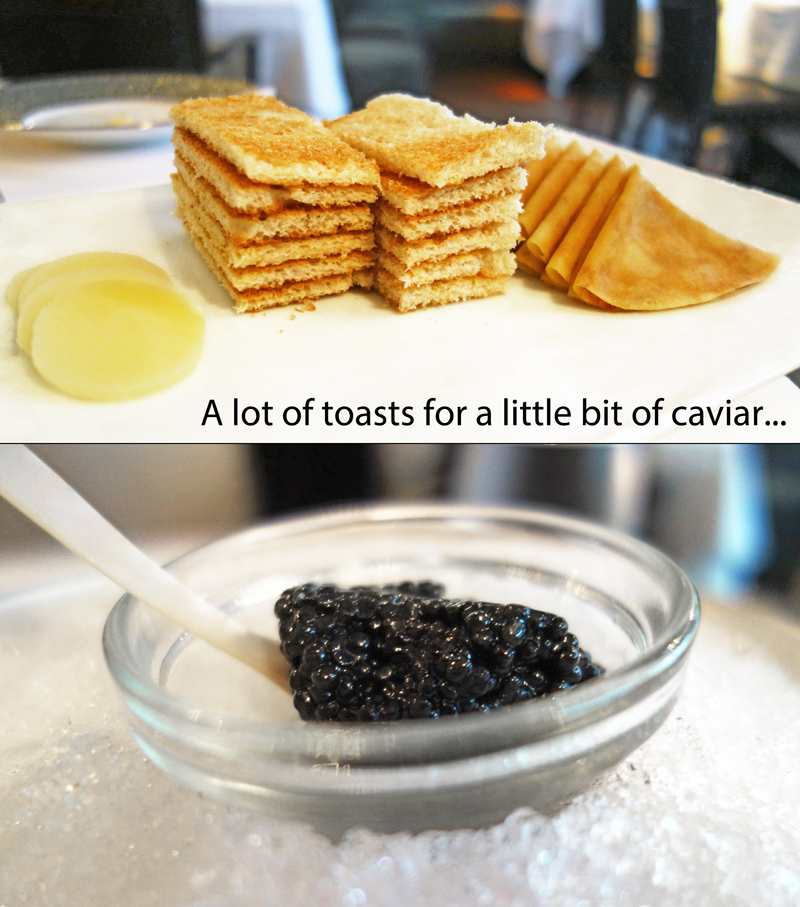 The steak tartare, a Czech classic, is topped with caviar (Siberian sturgeon caviar, to be precise), and there will surely be a reader to remind me that once upon a time there were sturgeon in the Vltava. I doubt the chef really takes inspiration from Czech Republic, but I’m open-minded. This is a strikingly beautiful plate for a dish that rarely sees elaborate presentations. The log of chopped meat, slightly spicy and mixed with capers, is wrapped in a beautifully marbled slice of  beef carpaccio, served with herb pesto, caviar, a quail egg, and a beef tendon cracker. The tartare-carpaccio combo is a simple but great idea. The meat is both very flavorful and very tender, and the perfectly cooked quail egg adds incredible richness, if only for one bite. The beef tendon has been dehydrated then deep-fried, a bit like a prawn cracker. Even if it tastes mostly of grease, the crispy texture brings a welcome contrast, and it gets extra points for originality. If I remember correctly, even the pesto (something I’m not normally very fond of) works well, as it complements the fairly plain tartare mixture without overpowering it. An excellent dish. You’ll notice I’m not talking about the caviar: try eating caviar with capers and tell me what you taste. 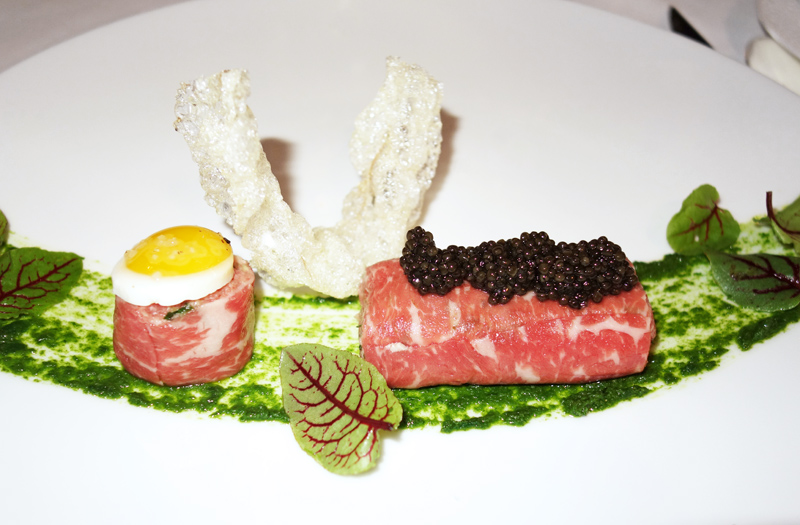 The king crab, parsnip, and caviar consommé, which wouldn’t be out of place in a Russian restaurant, is more of a mixed bag. Large chunks of king crab leg are reheated in brown butter for the best effect. For once, the caviar on top is actually a good pairing (which isn’t news to anyone). Some of the legs rest on a little mound of pineapple, celery root, parsnip, and king crab confit (i.e., more king crab in butter). The pineapple is a bit overpowering here, making the dish slightly off balance. Then there’s the blue crab consomme, also too potent and with a weird, somewhat acidic taste I can’t quite define. Is it just because it’s made with all the crab’s innards and very reduced? It certainly has a very dark color for a shellfish consommé. Some edible flowers add a noticeable floral taste when you get one in your mouth. A strange dish, neither failed nor successful: while the pineapple and consommé are what makes it distinctive, they need some tuning and toning down. There are also just too many flavors. 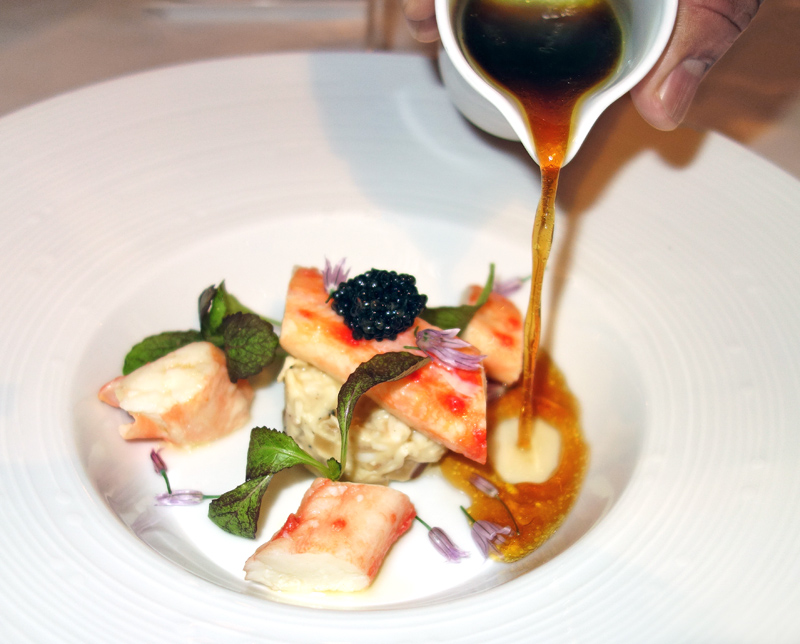 Off-topic again, but before dessert, you get a whole batch of warm, freshly-baked madeleines, made just for you. Wow. This is the kind of cliché I don’t mind, especially since quality isn’t sacrificed over quantity. Just like the mini-baguette, this is an impressive touch. 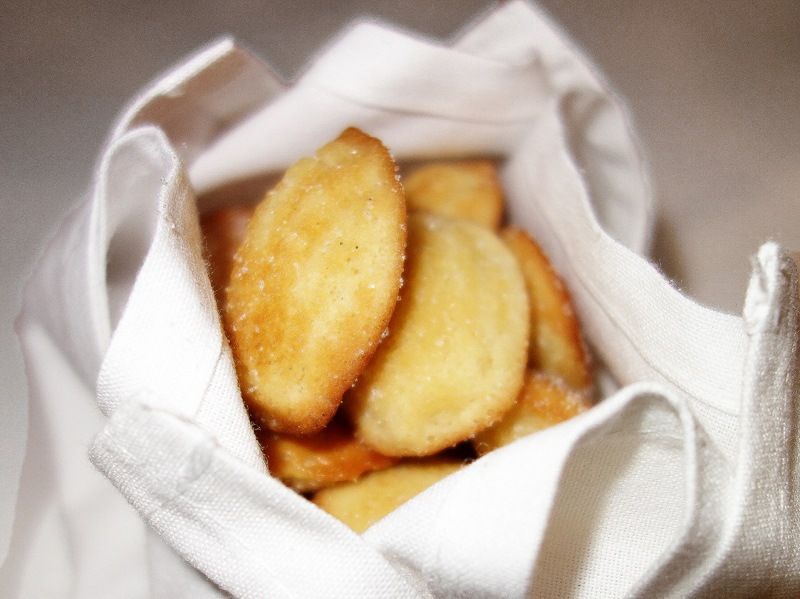 Yes, you can have caviar on your dessert too. It’s not explicitly listed, but the dessert that comes with the Signature Caviar Tasting Menu can be had separately. It consists of a variation on the now famous caviar-white chocolate pairing — a piece of brioche with coconut custard, white chocolate ice cream, and sterlet caviar, covered in a cloud of cauliflower foam (apologies for the poor quality of the photo below; I forgot to take a picture and had to capture it from a video). Again, the result is a little bit weird. First, I’m still not 100% convinced by the caviar-white chocolate thing. It doesn’t clash, but I wouldn’t call it an epiphany either. The caviar adds a touch of salt that goes well with the dish, but wouldn’t it be simpler to just add… salt? Or go the Petrossian route, and squarely transform your caviar into seasoning. The toasted brioche brings some crunch. There’s not enough coconut custard for it to be noticeable in most bites, and it’s a rather odd combination with the cauliflower-vanilla foam. If you remember my Nesselrod pie story, I would maybe try to pair the cauliflower with chestnuts instead — or I’d just have fewer flavors. In its current execution, this is probably the least successful dish of this review, but like the king crab dish, it could be delicious if it was more balanced and more sober. 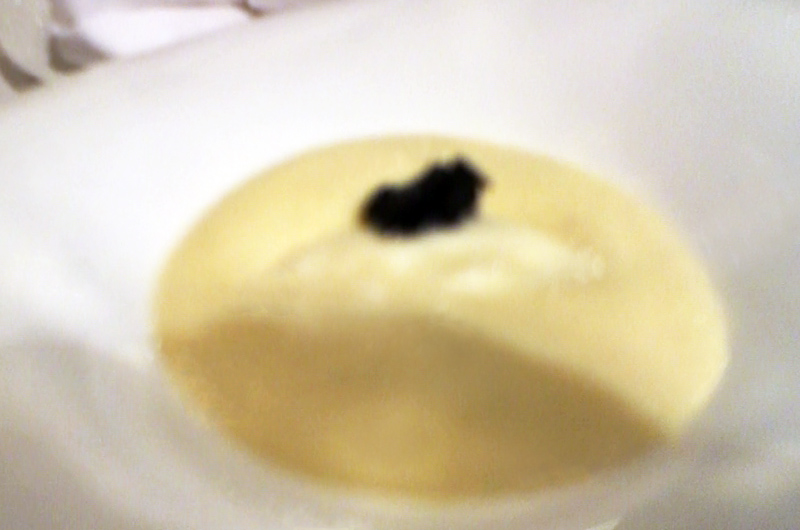 As could be expected, there’s a nice selection of vodkas, with shots priced at about the same level as the spoonfuls of caviar. The wine list favors Champagnes and white wines. If you want to pretend you’re drinking Soviet sparkler, get the Veuve Cliquot demi-sec.

Service is attentive, and when the whole Friday night service consists of three tables of two, they can’t really get overwhelmed.

The food at Caviar Russe can be excellent, but some dishes need tweaks. Sometimes less is more, and trying to cram 5-6 disparate flavors into one dish is just too much. Dinner can also be prohibitively expensive. While the tasting prix fixes are reasonable, the à la carte prices aren’t printed anywhere. Anything with a small dollop of caviar costs considerably more, and frankly that’s most of the menu. This is all the more regrettable when in several dishes the caviar brings next to nothing. Adding caviar on top of something doesn’t make it better when other ingredients overpower it. Pretension set aside, the exact same results could be achieved using good paddlefish roe for a fraction of the price. Maybe the results would be better even, as paddlefish roe has a more pronounced taste.

I can see two especially good reasons to go to Caviar Russe. One, if you’re in the mood for caviar. Why would you buy a tin to go when you can have someone serve it to you in a lovely dining room at no extra charge? Two, if you’re on a budget. Just go for the bread, butter, and madeleines! I suspect you’ll need to order something if you want to enjoy the basket of Proustian sweets. I’d suggest a salad, but there’s none on the menu. Maybe get the tartare and feed the caviar that goes with it to some nostalgic NYT critic… 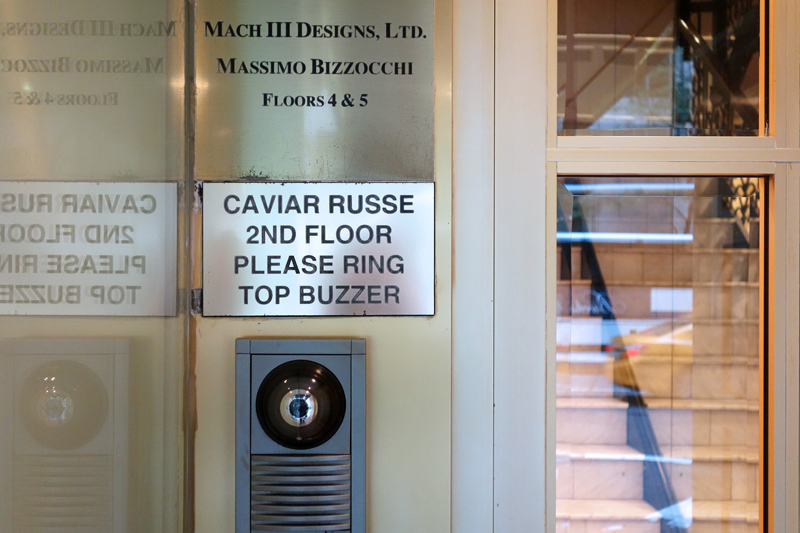