Home RecipesBaking Nesselrode, Part 2: the Restaurateur, the Old-Timers, and their Pie
BakingRecipesRussian Food

You might remember the story of the Nesselrode Pudding; or, how Paris’ best pastry chef created a dessert for the Russian occupants while working for that turncoat Talleyrand. But perhaps your senile great-grandparents have fondly reminisced about a popular dessert of their New York youth, a symbol of a bygone era, in a slightly different format: the Nesselrode Pie.

I haven’t yet found any solid information on how the delicious chestnut pudding crossed the Atlantic to eventually become a classic New York pie. What I do know is that the pie, as older locals used to know it, was popularized by restaurateur Hortense Spier… 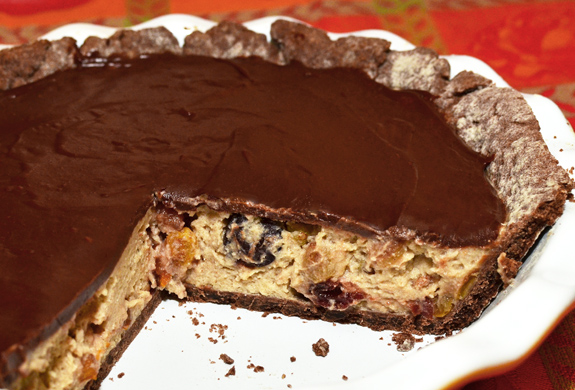 According to The Food Maven, Hortense Spier first started her business not as a pie bakery but as a brownstone restaurant on 94th St between Columbus Ave and Central Park West. The restaurant closed before World War II, and Mrs. Spier started baking her specialty pies for other restaurants. Besides the Nesselrode, there were lemon meringue, banana cream, and coconut custard pies. By the mid-1950s, these were the standard pies served in New York’s seafood restaurants and steakhouses. When Mrs. Spier died, her daughter, Ruth, and daughter-in-law, Mildred, continued the business.

The pie was a popular dessert for the holiday season, as you can see in this 1965 article, “Nesselrode Pie Rings in New Year”. Although already by that point, the recipe didn’t necessarily include chestnuts in any form. Around the same time, chocolate was added, usually as shavings on top. Little by little, industrialization of the American food supply resulted in the dessert’s drift into mediocrity. Could you imagine a pecan pie without pecans? Or a banana split without bananas? Well that’s what the Nesselrode pie became. One can still buy a product called “Nesselro”, which is (or was?) made mostly of candied cauliflower — I still can’t decide if this is repulsive or intriguing.

Mediocrity was followed by oblivion. The New York Times published a piece in 1983 claiming that “you will find the name Nesselrode on menus around the world”, complete with recipes for both a pie and a charlotte (the botched scan of the paper original makes these recipes very hard to read; the one for pie is also partially available here). Yet in the very same New York Times, we learn in 1988 that “Nesselrode pie left our culinary consciousness about 30 years ago and has hardly been heard from since”. Great journalism, guys!

Fast forward 16 years, and The New York Times (them again) acknowledges in 2004 that the dessert has gone the way of the dodo a long time ago, and purports to have found what might be the very last Nesselrode Pie, available at Teena’s Cake Fair in Canarsie, Brooklyn. But alas, Teena’s closed a couple of years ago. And so, finally, it seems that the only way to try Nesselrode Pie today is to make your own.

My recipe combines the old and the new. The chestnuts (prepared from scratch, just like the candied fruits) are the star of the show, and their flavor should be prominent. The addition of chocolate wasn’t a bad idea — the flavors pair well. So I kept the chocolate but used it in two novel ways, both in the crust and in a glaze. The chocolate crust has a hint of bitterness that balances the sweetness of the filling. It is important, however, that the chocolate glaze does not overpower the Bavarian cream, which is why I added cherry jelly to it (another idea would be to add chestnut purée instead). 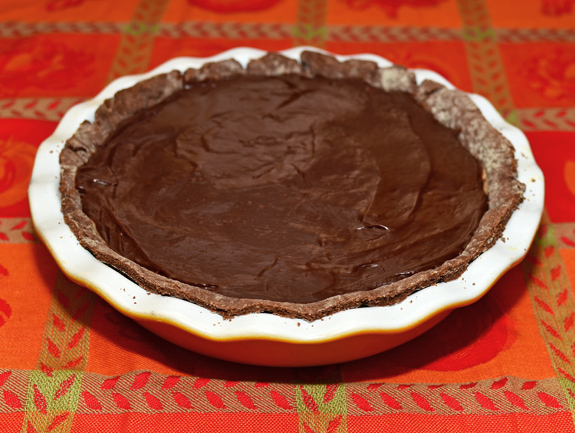 Funny and good writing of original recipes! Greetings from the Netherlands

I remember fondly the Nesselrode Pie of the 1950s and early 60s served at Miller’s Restaurant, located in the Woolworth Building NYC. The savor of chestnuts was a delight, the candied fruits taste jewels, and the pie was topped by a dome of Bavarian cream and chocolate shavings. It was fabulously rich in flavor and texture.

My late father was not a dessert guy, but he made two exceptions. Of those, only pecan pie was available, though it did not often meet his standards. The other was Nesselrode Pie, about which he seemed to have a deeply nostalgic, almost reverential feeling but could never find. I I have a tradition of making pecan pie on Dad’s birthday, October 1st. Yesterday I did not, but awakened from a dream of searching for a Nesselrode pie. Thank you for your wonderful posts; they are both intuitive and practical. Your treatment of the subject in 2 parts left me with the ineffable feeling I had solved a great mystery and been given a gift.

Glad you liked the posts! I also love pecan pie and have been perfecting a recipe for a little while, but it doesn’t quite fit with the subject of this blog.