Home RecipesDesserts Nesselrode, Part 1: the Count, the Cook, and their Pudding
DessertsRecipesRussian Food

March 31, 1814. With the Austrian, Prussian, and Russian armies having defeated Napoleon at the Battle of Paris, the War of the Sixth Coalition is now over. Tsar Alexander I of Russia receives the key to the French capital from Talleyrand, and enters the city at the head of the army, cheered by the crowd. Talleyrand, master of political flip-flopping, started to distance himself from Napoleon several years earlier, and is now eager to participate in the new government. He sends a message, through the Russian diplomat Count Karl Nesselrode, offering the tsar a place to stay at his palace.

Talleyrand’s chef at this time is none other than Antonin Carême, the first celebrity chef of sorts. So impressive is his cuisine that Alexander I takes Carême with him when he moves from Talleyrand’s digs to the Elysée Palace. During these few months of Russian presence in Paris, Carême creates a luxurious chestnut ice dessert in honor of Count Nesselrode. The Nesselrode Pudding is born — or, at least, this is how the story goes according to Ian Kelly’s excellent Carême biography, Cooking for Kings. 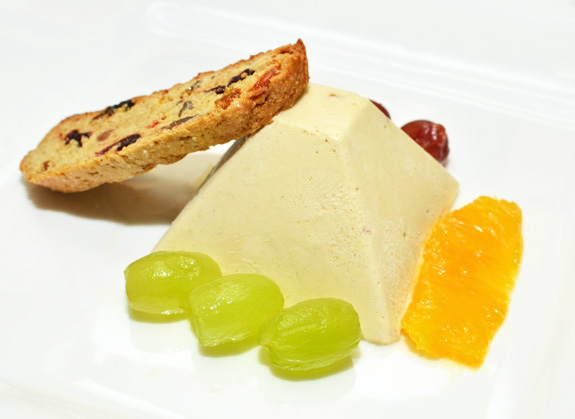 My own Nesselrode pudding harkens back pretty closely to Carême’s original recipe, except I serve it in individual molds, and I’ve come up with other elements partly so my plates didn’t look half empty. But the biscotti and the fruits not only provide complementary textures and colors, they also echo the orange, raisin, and cherry flavor combination that’s found in the rich chestnut pudding itself.

For the pudding, you will need a pyramid silicon mold: each pyramid measures 2.75″ length x 2.75″ width x 1.5″ high and contains 2.5 fl. oz. This is the same mold I used for my Baked Paskha, so if you need to rationalize the purchase, it’s actually more useful than it first seems 🙂 The biscotti recipe yields 6 extra pieces, but it would be hard to scale down the proportions. The candied orange peel also yields more than you’ll need, but that should be just enough to use in this post’s sequel when I publish it! 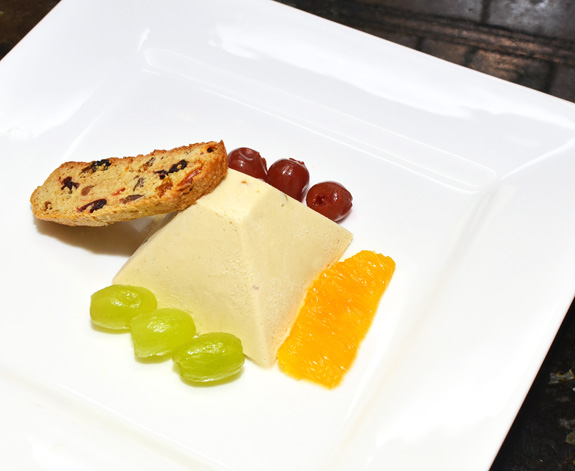 Olivier for kings, now pudding for kings… What about us, peasants!? Love the history lesson!

2 possibilities for the peasants:
– grow potatoes and make some deruny.
– put some traps in your backyard and catch a bunny for the Lavian Hare Trio.

[…] might remember the story of the Nesselrode Pudding; or, how Paris’ best pastry chef created a dessert for the Russian occupants while working […]