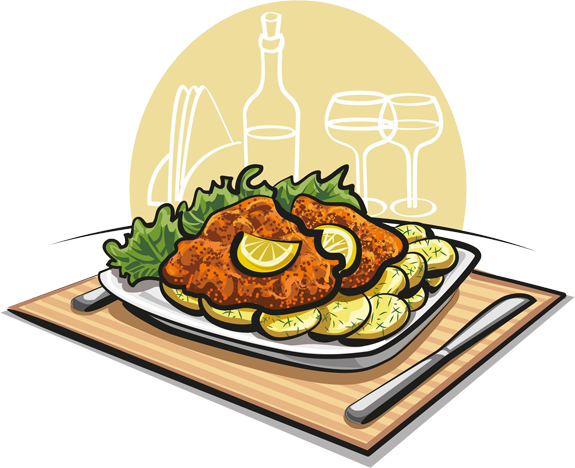 Zagat says alternative schnitzels are trendy in NYC. For proof, the duck schnitzel at The Marrow:

When Harold Dieterle reached for his mallet at newly opened West Village joint The Marrow, he didn’t start hammering veal or pork into a thin patty. Instead he reached for some duck, taking a dish that doesn’t vary much from restaurant to restaurant and making it into something exciting again. His version of this Austrian comfort food is served with quark spaetzle, hazlenuts, cucumber-potato salad and stewed wolfberries. The dish is at once different and familiar, providing a fresh take on a plate that can easily feel tired.

I’m not sure you can really talk of trends if the dish is served at only a single restaurant, however trendy the restaurant is. Has anyone else heard of NYC eateries serving these “alternative” schnitzels?

You may not think of schnitzel as an Eastern European dish, as it originates from Germany. However, schnitzels — whether made of veal, or more frequently pork or chicken — are indeed very common not only in Central Europe (Hungary and Czech Republic, especially), but even in cafés lost in the middle of the Russian countryside.

Meanwhile, Food Perestroika has you covered if you want to spread the hype at your own dinner table: