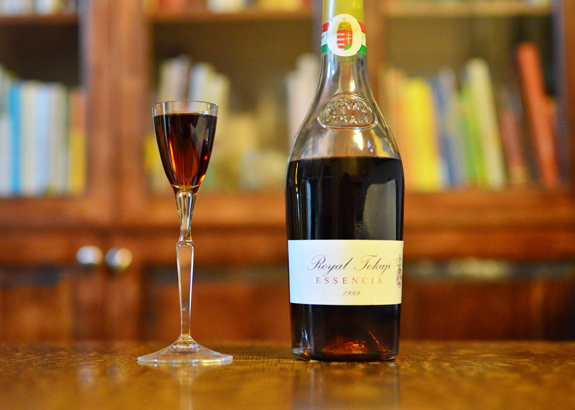 Located in Mád (only a few hundred feet from Úri Borok) Royal Tokaji has played an important role in Tokaj’s recent history. As its web site mentions, it was “the first foreign company established in the Tokaji wine region in 1990”. Its co-founder Hugh Johnson, who modestly calls himself “the world’s best known wine writer”, is just as modestly immortalized with a bronze bust in the courtyard of the winery, a former Diocesan Bishop’s residence. Still according to the web site, “following this leap of faith, others followed and the renaissance of Tokaji began”. Of course, considering Tokaj’s centuries-old reputation and the rush of foreign investments throughout Eastern Europe in the early nineties, one could argue this was really just a small leap.

Today, the company has become one of the best known Tokaj wineries around the world. If you encounter a Tokaji wine in a restaurant in the US, it is likely to be a Royal Tokaji product. Yet during my trips to Hungary in the mid- to late-00’s, I don’t recall hearing much about them. None of the winemakers I spoke to ever name-checked Royal Tokaji — they talked mostly about István Szepsy, János Árvay, and Vince Gergely. As far as I remember, Royak Tokaji did not participate in the spring Tokaj Wine Festival. The winery is only open for visits by appointment — and even this might be very recent, as I remember they never answered my email when I asked for a visit in 2007. 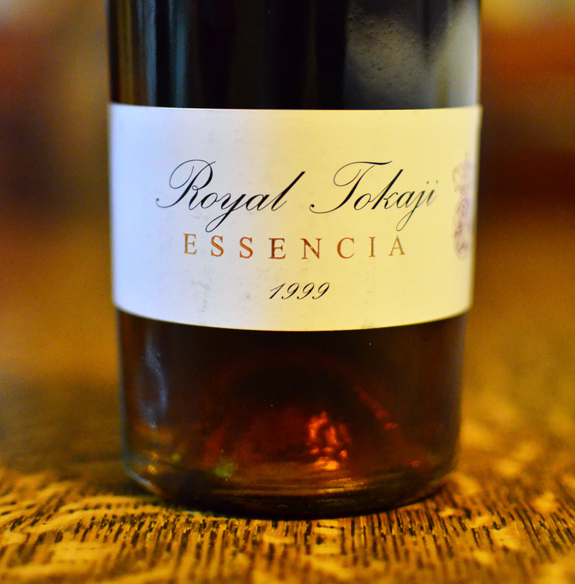 The vineyards essentially consist of small lots in the distinguished parcels of Betsek, Birsalmás, Nyulászó, and Szent Tamás, around Mád, and Mézes Mály in Tarcal. Here’s a short video that presents the region, the winery and the wine:
[vimeo http://www.vimeo.com/1860483 w=437&h=246]

The Royal Tokaji Essencia 1999 (note the labels uses the anglicized spelling of eszencia) is the wine you see in the above video. Like many rare and expensive bottles packaged to wow the well-off but not-so-well-educated consumer, it comes in a pretty box, with its own traditional crystal tasting spoon, although I’d still recommend an ordinary glass to sniff the wine — have you ever tried to swirl a liquid in a spoon? 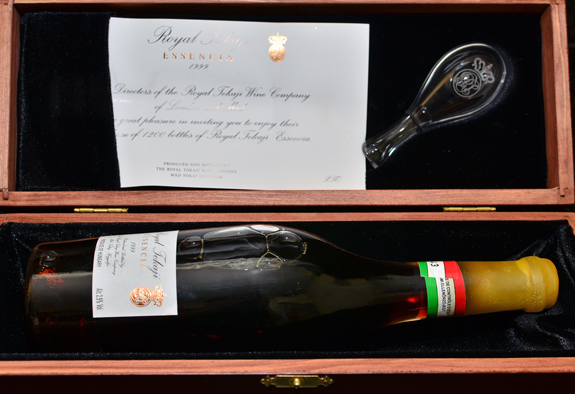 Royal Tokaji already provides a lot of a lot of information about this eszencia here, so the best I can do is separate the facts from the marketing blah blah.

The wine is very dark. The coppery dark amber color, though pleasant to the eye, had me worried that I would be disappointed by the taste. 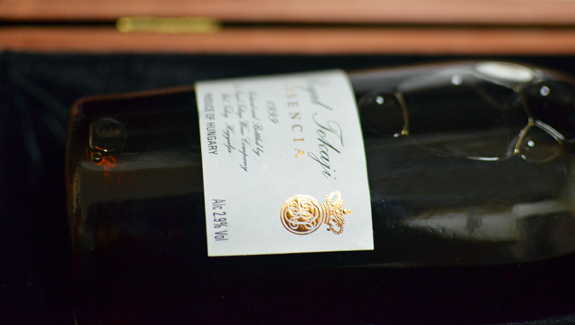 Happily, my concerns turned out to be unfounded. The nose boasted aromas of apricot, raisins, lemon, and lime. The palate wasn’t very different, just with more oaky notes and the lime giving the wine a long acidic finish despite the stellar sugar content.

I’d say it’s not as fresh tasting, and not as syrupy, as the previous eszencia I reviewed. It doesn’t make it any less good, though, just different. It’s actually easier to drink because it’s not so sticky sweet that you start coughing when you swallow it! 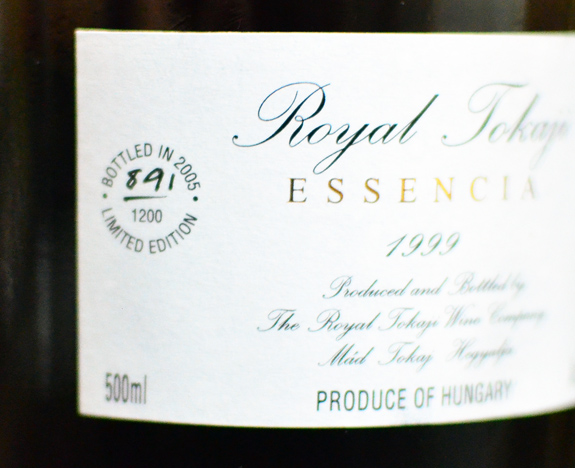 This is undoubtedly an excellent Tokaji from one of the best vintages of the 20th century. However, as is often the case with excellence, it’s up to you to decide if it’s worth the price. Since a bottle now fetches almost $1,000 (several times more than what I paid not too long after bottling), you might choose to invest in a different vintage instead — the 1995 goes for a “mere” $150.

Talking about the vintage 1995, I think you mix “Essencia” (essence) with “Aszuessence” or “Aszuessencia” or “Aszuessencia” or “Aszúesszencia”. 🙂 I know it can be misleading, and now the regulations have changed and only essence remains. The rest (Aszúeszencia) was in fact a conventional aszu wine above the concentration of 6 butts. Essence is something very different in quality, availibility and price. 😉

Hi Laszlo, yes I’ve heard of the recent regulation changes (more details here). However, this wine is a real Esszencia (or Essencia, as Royal Tokaji chose to spell it). It was made in 1999 and bottled in 2005, way before those changes.

Yes, I meant the last words of the last sentence of your article: “the 1995 goes for a “mere” $150.” Its price should not be compared to the 1999 essence because in 1995 Szepsy did not produce Essence, just Aszuessence. So it’s comparing apples with pears. 😉

I mean “Aszuessence” is a very different thing. It’s a wine with about 180-250g residual sugar and alcohol of about 10% because the noble rot (botritised) grapes are put to ‘normal’ white wine to make it sweeter.

While Essence (like the 1999 vintage) is NOT a wine. It’s a speciality that is produced only in Tokaj, Hungary. It’s the pure nectar of noble rot grapes picked one by one, not even pressed, residual sugar up to 900g/litre and alcohol of 2-3 %.