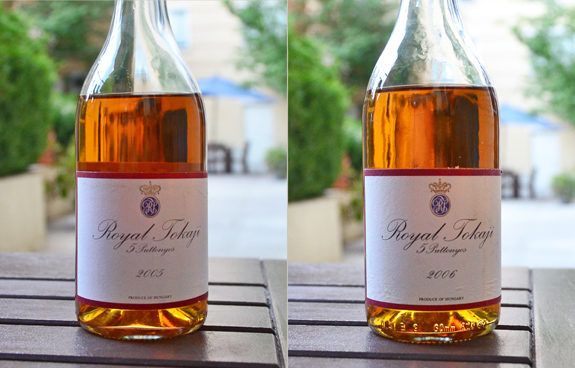 I first wrote about the Royal Tokaji wine company about a year ago, when I reviewed the very precious 1999 Essencia. For more information, the first half of the video below, presented by owner Hugh Johnson, gives a good overview of Tokaj, the region, and Tokaji, the wine. My favorite moment: the capitalist saviors rescuing wild, communist Hungary from its oenologic mediocrity in their big 4WD. The second half of the video is essentially a commercial for Royal Tokaji.

The two Royal Tokaji aszú 5 puttonyos wines that I’m reviewing today have had the rare honor of being featured in the Wine Spectator Top 100 for two consecutive years.

First let’s review what the experts had to say:

My own tasting notes concur with the most obvious characteristics, but diverge in the details. Both wines boasted roughly the same medium amber color. The 2005 smelled of dried apricot and honey, and tasted a bit oxidized. As is often the case, the taste evolved into citrus (especially grapefruit) a couple of days after the bottle was opened. The 2006 had a similar nose, but with notes of caramel and a hint of mango. It wasn’t oxidized and tasted sweeter. I found both very representative of the renaissance of Tokaji, with the older vintage just good, and the newer one very good.

What was missing in both cases was surprise.  Here’s how Wine Spectator explains their yearly selection:

“we select the Top 100 based on quality (represented by score), value (reflected by release price), availability (based on the number of cases either made or imported into the United States) and an “X-factor” we call excitement. ”

The 2005 and 2006 retail for $35-40, so it’s fair to talk about value, since I have to agree they’re both very enjoyable wines. There’s also no doubt that they’re widely available: I’ve read 5,000 to 6,000 cases were produced of each, which is neither microscopic nor humongous — I’m almost surprised the production wasn’t larger, since these wines seem to be available in so many stores and restaurants. The excitement factor, however, leaves me doubtful. These are very classical wines: how many dozens of Tokaji bottles have been described as smelling of apricot, honey, caramel, and mango? Apricot and honey in particular are probably the two most recurring notes found in Tokaji. Maybe it’s just me, but when I don’t see any originality? Even if my general appreciation is unchanged, my excitement wears down. 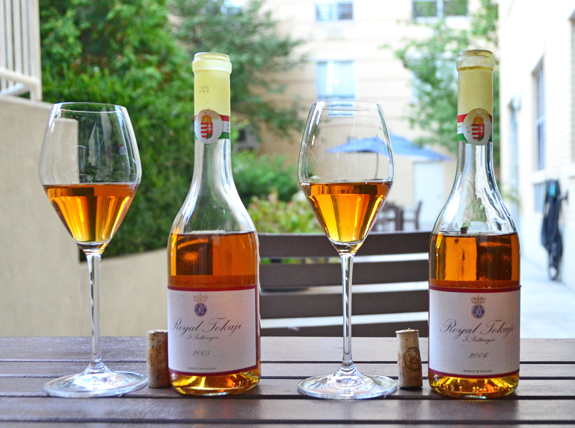 The Chef, the Computer, and the Baltic Apple Pie