Spring is here, and despite the persisting snowfalls throughout New York State, the ice fishing season is coming to a close. I haven’t had much luck recently. No matter how hard I tried and how long I froze my butt (sometimes way after all the other fishermen had given up), I didn’t land anything. I’m starting to doubt whether some of the lakes I’ve been to actually contain fish at all. So I decided to have my small revenge and just buy some fresh salmon at the store.

For a change, here’s a recipe from the “let’s make a trivial dish with 3 ingredients and write about it” school of blogging. It’s inspired by something I found in a Russian cookbook called Pro Okhotu I Rybalku [Of hunting and fishing]. Not only does it come with very appetizing pictures, and cover most wild game and fish you’re likely to kill for food, but it offers a different take on preparing your catch. There are traditional Russian dishes of course, but also more creative recipes (such as partridges in chocolate sauce or pigeons with kumquats and couscous). 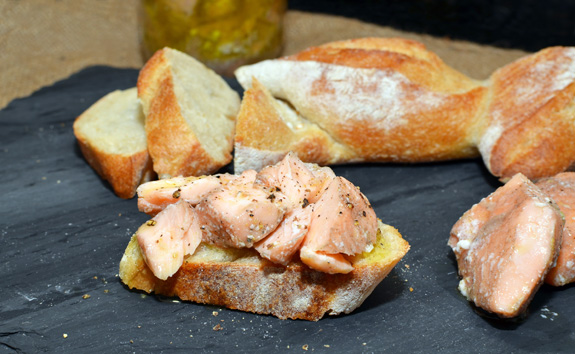 The idea behind this simple recipe is to give fishermen another way to prepare their catch when fish has been biting more than expected (I wish I had that problem!), and they’ve already cured, pickled, kippered, and burgered everything they could. It works equally well with any Salmonidae, and the jars can be kept refrigerated for a while — the original recipe says up to 3 months, but I’d recommend exercising your judgement after a few weeks. 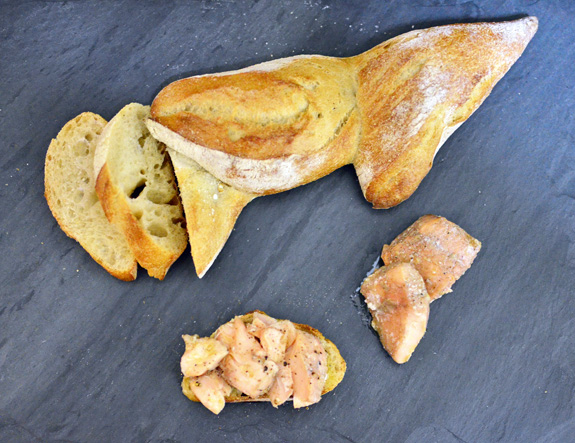 […] recently adapted a recipe for Jarred Salmon In Olive Oil from a Russian cookbook titled Pro Okhotu I Rybalku [Of hunting and fishing]. Here’s another […]

Great idea! And we can try it with many types of fish! Thank you!