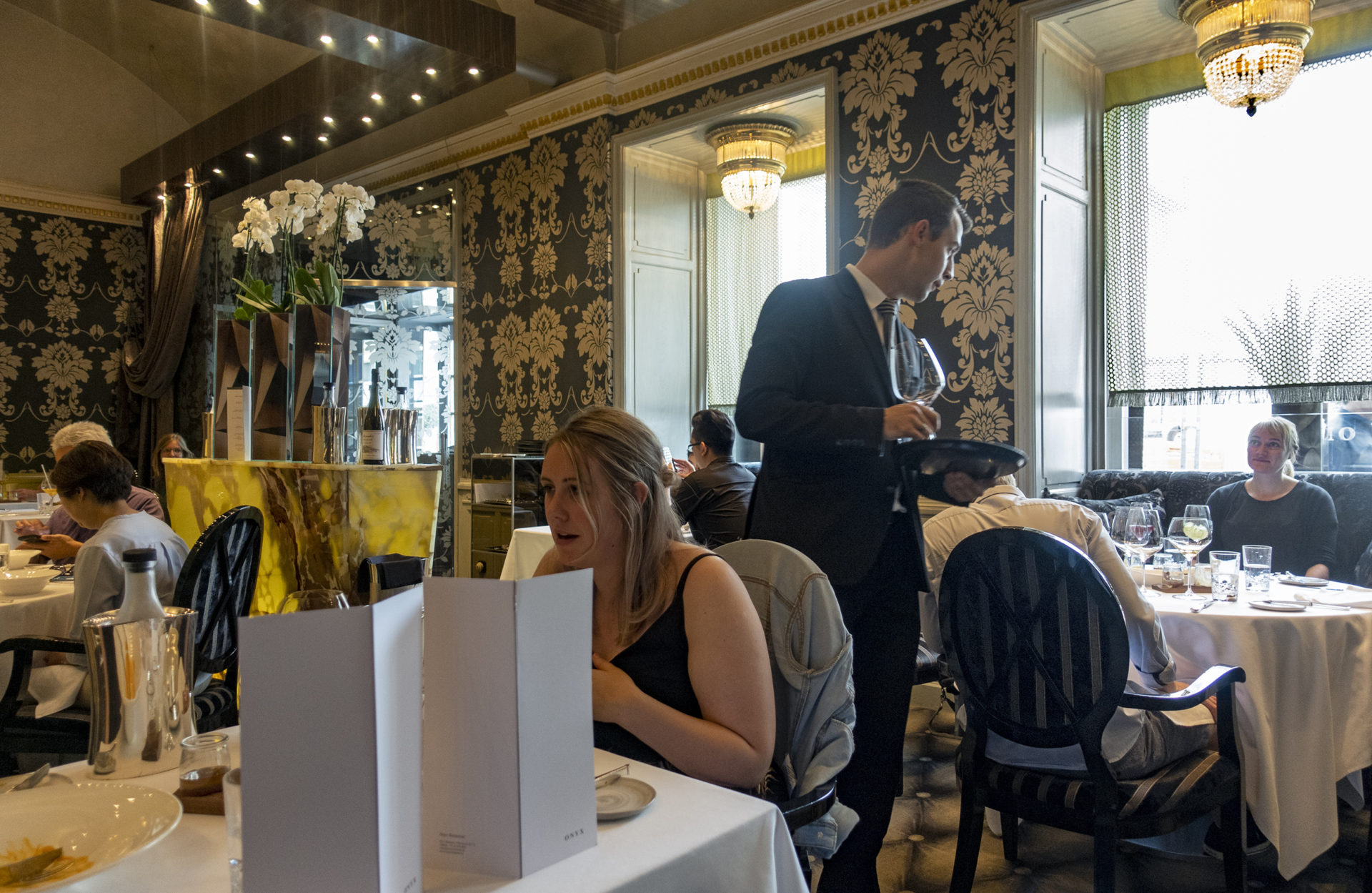 Located smack in the center of Budapest, on Vörösmarty tér next to the Café Gerbeaud, Onyx isn’t just any restaurant. Not even just any high-end restaurant. It’s the only restaurant in all of Eastern Europe to ever receive two Michelin stars. Here’s more about it…

Onyx opens its doors in 2007 in the Gerbeaud House (it shares the same owners as the famous café). Led by executive chef Szabina Szulló and chef Tamás Széll, it receives its first Michelin star in 2011. In 2016, Széll and his team win the European final of the Bocuse d’Or, which brings widespread acclaim to both the competitors and the restaurant. The following year, Szulló and Széll leave Onyx to start new projects. They now run two other restaurants, Stand (one Michelin star) and Stand25 Bisztró.

The founding chefs’ departure didn’t derail Onyx’s ascending trajectory, though, and in 2018, with Ádám Mészáros at the helm, it’s awarded its second Michelin star. Mészáros didn’t get there out of the blue; far from it. Born in Budapest in 1988, Mészáros starts down his culinary path at a young age. In 2002, he attends the Gundel Károly Secondary School, followed by the Vocational School of Hospitality. After graduating, he completes his training with 3 years of externships at Budapest’s top restaurants at the time, Trió Restaurant, Matteo Restaurant, and Costes. Mészáros is then offered a full-time position at Costes in 2009, and a year later, Costes becomes the first restaurant in Hungary to receive a Michelin star. He leaves soon after for a stage at the famed El Bulli in Spain, then joins the team at Onyx in 2011, shortly after the restaurant became the second in the country to receive the coveted Michelin distinction. He keeps rising through the ranks over the years to chef de partie, then to sous-chef, and becomes the natural replacement once Szulló and Széll quit. Shortly after, he makes Hungarian culinary history.

In 2020, Onyx begins a metamorphosis. After hosting a dinner modestly called ‘The Last Supper,” where a few select participants are served a hammer for the last course so they can symbolically demolish the decor, the restaurant closes its doors. The transformation is still underway. In fact, today in Budapest, as I type this, Onyx is holding a sale where one can acquire dinnerware items and other relics from the restaurant that is no more, while eating some Hungarian street food prepared by the former kitchen – I’m happy to see the menu includes lángos made with a potato-based dough, just like mine!

I visited Onyx in August 2018, and the following review of the tasting menu, paired exclusively with Hungarian wines, is a belated testament to that all-too-brief era when it sat alone at the top of the Eastern European gastronomical world.

The bread assortment that arrives shortly after the waiter takes my order is almost a course on its own. There are miniature pogácsas and a very black squid ink bread, along with several other kinds I should have written down. All of them are really excellent. Spread them with butter or chicken liver mousse topped with apple jelly, an original and delicious alternative to the butter.

Everything goes very well with the refreshing 2018 Egri Csillag, by Böjt Winery in Eger. This is a blend of four varietals: Sauvignon Blanc, Riesling, Leanyka, and Muscat. Quite pleasant and well balanced, with peach notes and a slight floral hint from the Muscat.

The water buffalo tartare with shallot, and mushroom is also very pretty and tasty, but there are too many things going on. Some of the decorative elements, such as the kind of leaf on top, have no identifiable flavor and hide the tartare so much I can no longer see what I’m eating. The tartare, surrounded by slices of raw white mushrooms, has a very pronounced onion taste (in a good way) and is covered with a layer of crunchy quinoa, which could be a good idea if there wasn’t so much of it and it wasn’t so crunchy. I’m told there’s also goat cheese somewhere – in the dots of white mousse, perhaps?

The dish is paired with a glass of 2017 Oreghegy Riesling from Matyas Winery, a Hungarian winemaker in Nová Vieska (a.k.a. Kisújfalu in Hungarian), Slovakia. I’ve never had a Riesling quite like it: mineral, very full-bodied, dry, maybe a bit oxidized but not too much. A great find.

If a Hungarian restaurant with two Michelin stars offers foie gras as a supplement to a tasting menu, I gladly accept, but I expect to be served one of the best I’ve eaten in my life. The duck foie gras, almond, and truffle milk loaf does not deliver on that expectation. First, in the land of goose liver, why am I served duck liver, which, as any foie gras lover will tell you, is rarely as good? Even for duck foie gras, it’s not spectacular. It’s served with a bit of apple sauce and a black powder supposedly made with coffee, though I don’t really taste coffee – how is that possible? The dish tries to be pretty but the oddly shaped blob of foie gras mostly reminds me of a turd. It’s not even practical to eat, as there isn’t enough bread. I’d trade the useless tiny crackers for a piece of toast any day!

This is served with a Tokaji dessert wine, of course: a 2003 Aszú Esszencia made by Sauska (a wine I’ve reviewed here) and served in a small spoon generally reserved for pure Esszencia. The wine is every bit as delicious as I remember it being, and I could have drunk a whole glass.

The “stuffed paprika” with lamb and tomato is very successful and doesn’t boast too many elements (except for that unnecessary chip shaped like a pepper and placed on top as a garnish). It consists of a small piece of red pepper stuffed with lamb meat flavored with different peppers, in a tomato sauce with celery and celery root, and decorated with a red pepper and cheese purée as well as various micro-greens (and the aforementioned chip). The meat inside almost has the texture of a thick sauce, and the sauce itself tastes like ripe tomatoes from the market. Very well made.

As for the wine pairing, the 2015 The Collective Boys by Maurer Ozskar (actually located in Serbia, near the border) is a blend of Merlot and a white grape called “white honey,” barrel-aged for 12 months. It boasts a very nice nose (maybe it’s the power of suggestion, but I smell honey) but is a bit too tannic and disappointing on the palate. The winemaker likes to revive old vineyards and forgotten grape varieties, and I’d be curious to try more of his wines.

The rooster consommé is supposedly cooked with a whole rooster for 14 hours. It’s simpler than the other dishes I’ve had so far, which I appreciate. The consommé is indeed quite concentrated, and very good. In the center, there’s a strange ravioli with a crunchy texture (I’m told it’s made with thin slices of carrot instead of pasta, and filled with rooster stew). It’s topped with more carrots and a few slices of summer truffle.

The wine I am poured this time is a 2012 Hárslevelű from the Fekete Winery in Somló. It’s aged in oak barrels, as is traditional in the region, and you can see it from the color. This is a fairly full-bodied, complex wine that matches the complexity of the consommé. A good Hárslevelű that I would recommend.

With the venison “montage,” duck ravioli, celery root, and chervil we’re back to dishes with a lot of going on – a hell of a lot! Let’s start with the centerpiece, venison loin with pistachios with chervil on top. Not quite, actually: small pieces of venison loin are caught in a matrix of emulsion sausage. Even if it’s made with venison, this large sausage reminds me of food from the school cafeteria. Why would one put venison, the meats of kings, in a hot chunk of bologna? And why stick chervil leaves to it? This “montage” is served with a classic celery root purée thickly piped into a geometric pattern, maybe just so that the waiter can pour some jus within its boundaries. Onyx loves pouring stuff tableside; almost every dish so far has had something poured tableside. When it’s a consommé, sure, why not, but after the second or third dish, it becomes gimmicky. As for the ravioli made of celery root slices filled with duck and cherries, I don’t really understand what it’s doing here. What’s the point of serving duck with venison? Shouldn’t they each be given their own dish, to let them shine? There’s also a tartlet made of brick dough and filled with celery root, celery, and pine nuts, which is the kind of thing corporate catering companies come up with when they’re tasked with organizing a gourmet reception. To be clear, it’s not necessarily that the ravioli and the tartlet are too much, it’s just that they don’t complement the flavor profile of the whole dish very well and their execution fails to impress.

Perhaps because of my opinion of the dish, I was also disappointed by my glass of 2015 Petit Rhône Syrah by Jánosh von Beöthy, in Badacsony. I know the winemaker has received some high praise in Hungary, and the wine is certainly not bad at all, but it has a cooked berry flavor that I’m not fond of.

Finally, the chocolate, walnut, and rum dessert is a faux ice cream bar inspired by Somlói galuska. This dish is just on the right side of the thin line between playful and gimmicky (except maybe for the greens). And it’s delicious! The bar consists of chocolate cream in the center, a vanilla sponge outside, and a chocolate coating. The stick is edible too – it’s made of white chocolate. Then there are pieces of microwave walnut sponge cake flavored with rum, a mystery white powder, and a few dots of various sauces.

I’m not crazy about dessert wines being paired with chocolate desserts, but on its own, the glass of 2007 Tokaji Aszú 6 puttonyos from Kiralyudvar is delicious (as I would expect; see my review of the 2000 vintage here).

Overall, the food at Onyx is great, but it sometimes feels too gimmicky and too cute for its own good. I’m known to be of the opinion that if an element doesn’t add a flavor of its own and doesn’t complement the flavor profile of the dish, it shouldn’t be there. That extra leaf/flower/chip might get the chef a few more likes on Instagram, but for people who actually come for the food (a vanishing category, it seems) and are eating the dish, it’s somewhat detrimental to its harmony. It’s also in no way a requirement to get more Michelin stars. But this obviously doesn’t mean I wouldn’t go back. My meal at Onyx was a remarkable one, with a very interesting selection of wines, and all at a reasonable price for this level of fine dining. In fact, I look forward to discovering what the restaurant will be like after its ongoing metamorphosis!