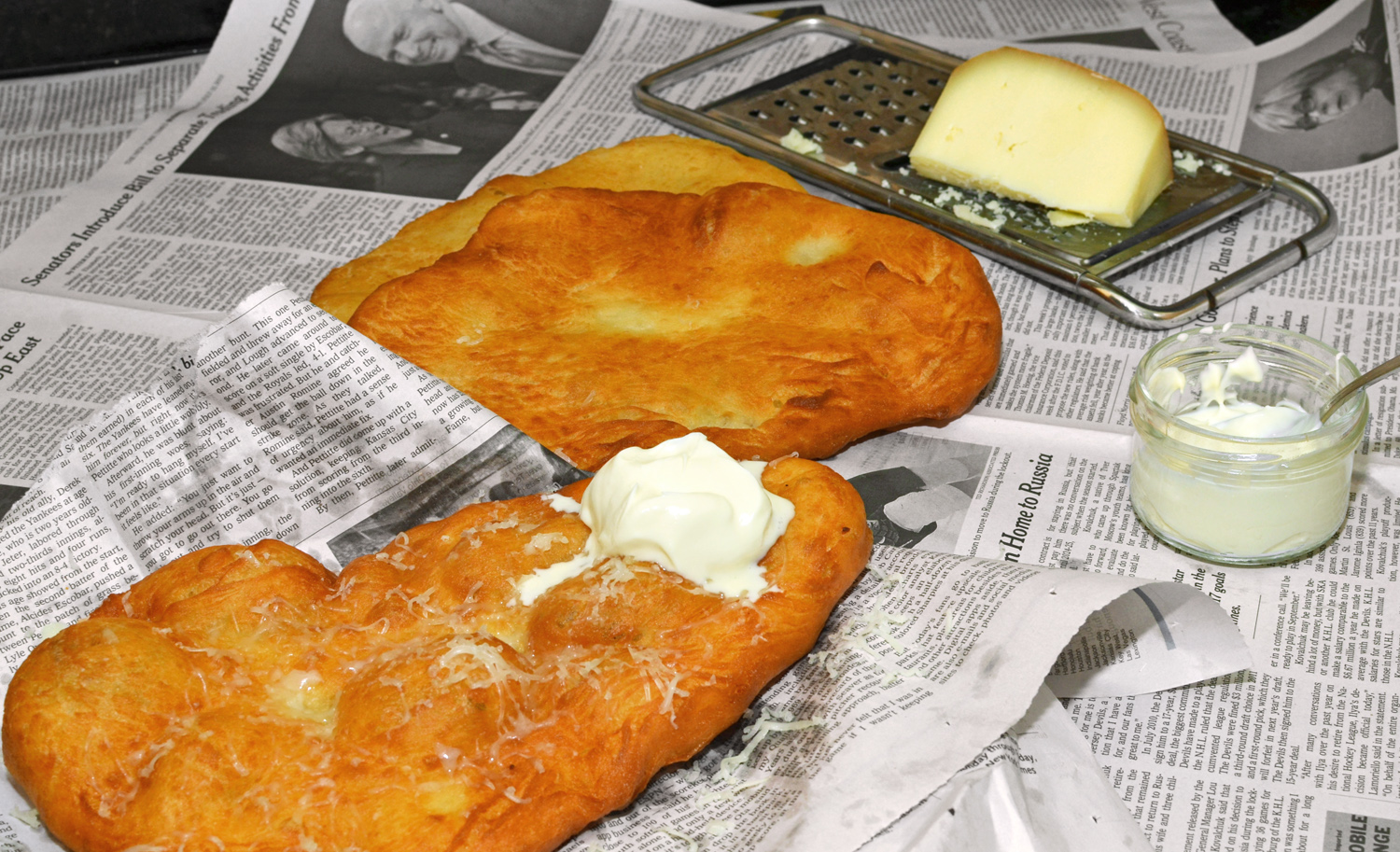 In Hungary, whether you’re at the market, at the train station, on the beach or just walking down a commercial street, sooner or later you will smell the bewitching greasy invitation of the lángos, the ubiquitous Hungarian deep-fried flat bread. You might even encounter this fat-soaked snack in neighboring countries like Austria, Germany, Czech Republic, Serbia, or Romania.

Wikipedia reveals some interesting facts about the etymology of the word:

The name comes from láng, the Hungarian word for flame.[…] [The] ancestor of flat breads was the panis focacius attributed to the Romans (of which derives also the Italian flat breads called focaccia). In ancient Rome, panis focacius was a flat bread baked in the ashes of the fireplace (cf. Latin focus meaning “fireplace”). However, the modern lángos, despite its name, is not prepared near an open flame but rather by deep-fat frying, and among Hungarian foods it is instead the pogácsa which preserves the connection, both etymological and culinary, to the ancient panis focacius.

There’s still a gap in the story, though, since the Romans and the Magyars never actually found themselves in the same place at the same time. The Hungarian tribes lived around the Ural Mountains until the 8th century, while the Roman Empire had disintegrated in the 5th century and hadn’t expanded much farther East than the shores of the Black Sea. The link may just be the Magyars’ invasion of former Roman Pannonia (modern-day Hungary), where some Roman customs and cuisine must have lingered. 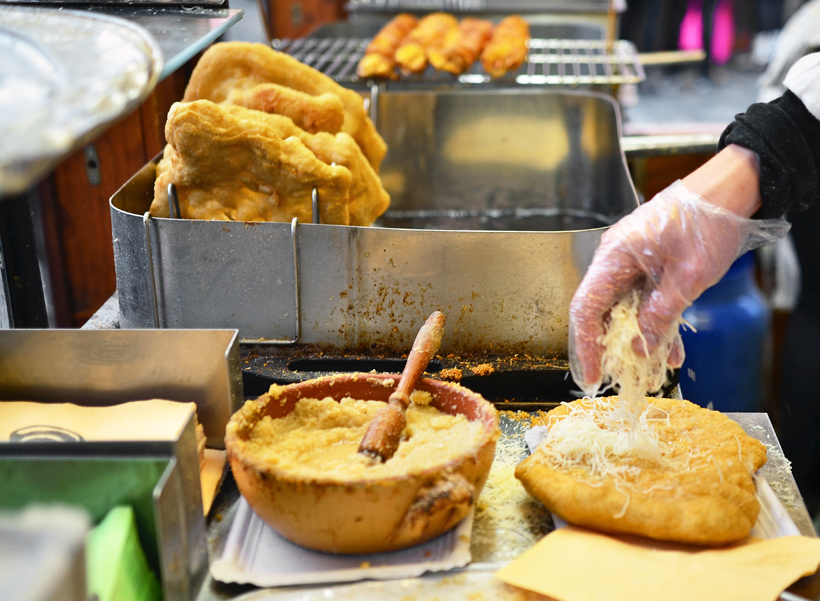 Lángos on the Old Town Square in Prague

Anyway, let’s get back to the lángos. It’s usually eaten as a snack. The toppings of choice are grated cheese and sour cream, but there are many variations. Ham, sausage, cabbage, mushrooms, quark, and butter work great, as well, and you can even make a stuffed version with some of these ingredients.

However, no matter how you prepare it, don’t expect an epiphany when tasting your first lángos: it’s just fried dough. (Of course, my posting such a simple recipe has ulterior motives that shall be revealed soon…)

For those of you who would prefer a lighter option, I’m also giving a recipe for the original baked lángos. Though totally different from the fried version, it’s a pretty good bread. Feel free to top it with garnishes, or use it to make sandwiches! 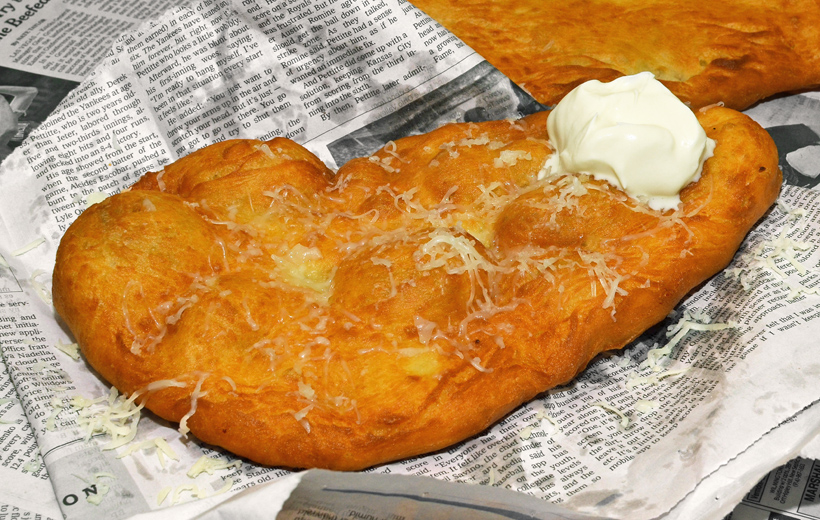 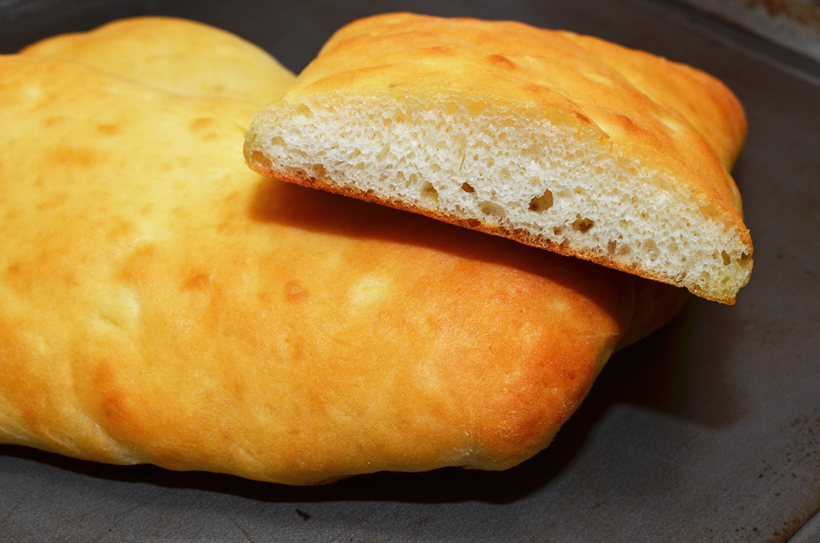 Wow. Never heard of this before. Interesting dough recipe!

Have you been to Korzo Haus in the East Village? There’s one in Brooklyn too but I’ve only been to the EV one. They make a burger that’s wrapped in langos and it’s delicious. (My autocorrect tried to change that to “wrapped in langoustines” . . . um, no). I believe they make most of their condiments in-house, too. Everything pickle-y I’ve had there has been very good.

[…] I published my recipes for lángos and goulash sauce, I promised that these were the building blocks for more complex dishes. The […]

[…] perch fritters use a modified version of my langos dough, with hard cider added to turn it into a thick batter. The fritters are great by themselves, […]

Langos are one of my favorites at the Bonn Christmas Market (Germany) every single year! Thanks for your great post.

[…] “Lángos”- a deep fried potato bread, with a texture of a doughnut. It is brushed with garlic oil and topped with sour cream and grated cheese. […]

My hungarian mother NEVER put anything but flour, yeast, sugar (for the yeast) water, salt, and oil in her LOUNGOUSH and never anything other than salt on after except powdered sugar if we wanted sweet. I haven’t the faintest idea where your recipes come from that have all that other stuff in them.

Your Hungarian mother lived in a totalitarian country with recurring food shortages and she doesn’t write a food blog.

There is one thing however, which her mother knows: how to make lángos dough like Hungarians do. And I can assure you, there is no potato whatsoever in the lángos you get at the piac or on the strand by lake Balaton. Tejföl and cheese are mandatory toppings however and not just the flimsy amount you put on in the cover photo. We’re going for a heart attack at 50, for crying out loud!

Hi Attila, sometimes I make cheeseburgers at home. I don’t, however, try to replicate McDonald’s Quarter Pounder with Cheese — I want to think mine are rather better. I ate many other burgers made by Americans that tasted either great, just OK, or plain disgusting, because one’s nationality is no guarantee of one’s culinary abilities. Finally, I don’t claim to know the perfect amount of cheese that goes on a cheeseburger: I have my preferences, but if my guests think differently, I’m happy to oblige. Now guess what? The same goes for langos and Hungarians.

Florian, I understand that and indeed, I’m not at all saying that your lángos is inferior to what you get here in Hungary from a grease-caked tin shack. Some people might like yours better, I might like the tin-shack version better, hell, even some born-and-raised Hungarians might prefer your version. And I’m not even saying that no Hungarians put potato in their dough. I just felt like some liberties you took with the recipe changed the dish you originally intended to present substantially. But I guess it also depends on what you want to achieve? Do you want to present a personal riff on an exotic dish or do you want to present the lángos in its most authentic form. Because based on your whole blog, it appears to me that it is the latter, you’re trying to unearth and present to an audience the treasures of an exotic land(s) and in that case, I look at the image on top and I say “that’s not how you put sour cream and cheese on a lángos”.
Anyway, I’m not trying to be a pain and I really appreciate the work you do and how you apply your culinary-scientific approach to recipes of this region that were usually born out of necessity and frugality as opposed to culinary science and decadence like other, more dominant cuisines. Really looking forward to The Goulash Archipelago, too.