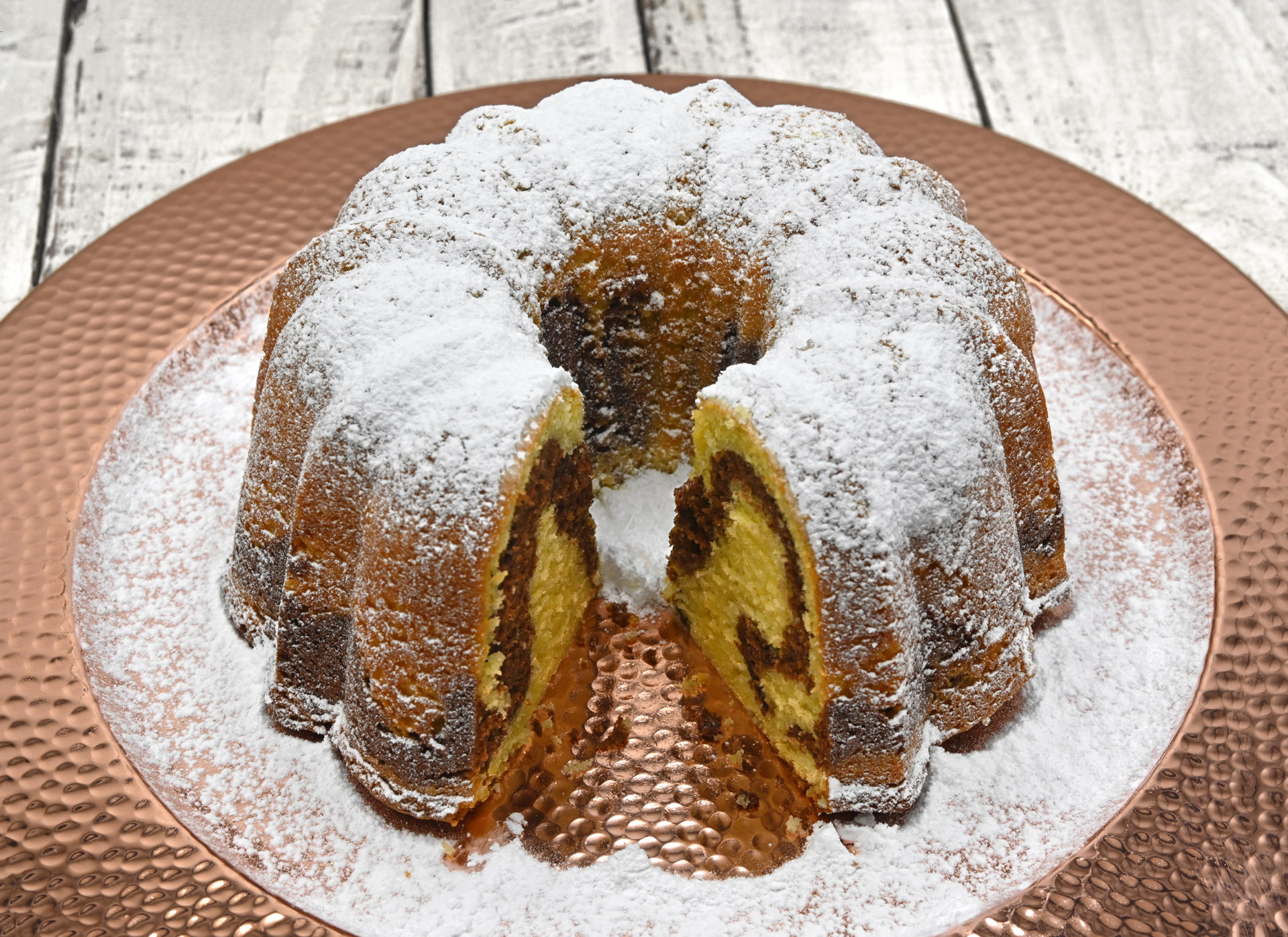 In Czech Republic, bábovka is a popular dessert. Unlike vánočka that’s made only for Christmas, it’s an everyday cake, easy and quick to prepare (one can even buy bábovka mix), perfect as a coffee cake or for the kids’ afternoon snack, and available in dozens of variations. Then why is it not more famous abroad, you may ask? Actually, it is, just under different names: Gugelhupf, kouglof, Bundt cake, and sometimes marble cake – these are all bábovkas!

Which version came first? Early Gugelhupf mentions are found in late-Medieval Austria, when it is served at major community events such as weddings and is decorated with flowers, candles, and seasonal fruits. The first known recipe is featured in Marx Rupolt‘s 1581 Ein new Kochbuch, a kind of textbook for professional chefs in training. In the Austro-Hungarian Empire, the name eventually comes to designate in Viennese cookbooks a rich cake flavored with rosewater and almond. Since there don’t seem to be such early mentions of bábovka anywhere, I’m gonna go out on a limb and say that the cake is imported into the Czech culinary repertoire by way of Vienna.

Gugelhupf later evolves to become a yeast dough cake with raisins and almonds baked in a special pan, the Gugelhupf mold (which seems to be brought to America by Jews in the early 20th century, eventually evolving into the Bundt mold that popularizes Bundt cake on this side of the pond). In Central Europe, Czechs, Slovaks, and Hungarians develop regional varieties, such as one filled with a layer of sweetened ground poppy seeds.

In the second half of the 19th century, baking powder is invented! People the world over decide they can’t be bothered to wait for yeast dough to rise anymore. As for those pesky poppy seeds that get stuck between your teeth, with the development of the Dutch process in the early 19th century, why not replace them with cocoa powder? Eventually, as long as it’s baked in the traditional mold, almost anything can be a Bundt cake, a bábovka, or even a Gugelhupf.

So here we are. Today, Czechs most often prepare bábovka as a marble cake, with one light layer flavored with vanilla, and a dark one mixed with cocoa powder. In some places, raisins, candied fruits, or chocolate chips are also common. But really, as long as you keep the Bundt mold, pretty much anything goes. Kynuta bábovka (leavened bábovka) is the original made with flour, eggs, milk, butter, and yeast. Trená bábovka (sponge bábovka) uses beaten egg whites and baking powder to give the cake volume and airiness. And check out this site (in Czech) for many more options: fast bábovka (with whole eggs), bábovka with whipped cream, bábovka with kefir, bábovka with oil; bábovka with zucchini, bacon and walnuts, apples, carrots, coconut, poppy seeds, or marzipan and nougat. With so much diversity, it’s tempting to just translate bábovka as cake! And if one needs any more proof of the degrading effect of the cupcake craze on mankind, there’s even a bábovka in a cup – a confection that has lost all of the attributes of the original…

I’m offering two recipes today: one marbled sponge bábovka, and one bábovka made with whipped cream, raisins, and Maraschino cherries. I did try a yeast dough bábovka as well, but to me the bready brioche-like taste and the airy but somewhat sticky texture that it produces felt less like the modern idea of a cake (although maybe some of this is due to the recipe I used).

These being simple desserts, I want to bake the best versions possible! Here are a few steps I’m taking towards that end:

And then there’s the flour… Inevitably, when talking with Czechs about baking, the discussion will turn to Czech Republic’s unique categories of flour. When it comes to white flours in general, there are a few factors that vary: gluten content, wheat varieties, milling size, and freshness. I’ve talked about the latter here, basically stating the fresher, the better; don’t buy flour in bulk from the other end of the continent/world. In the US, flours are pretty much exclusively rated by gluten content: there’s bread flour with high gluten content, cake flour with low gluten, and all-purpose flour in between. The wheat varieties and milling sizes are rarely under your control: unless you mill your own, you get what you get. As far as I know, most countries in Europe use a similar system – except Italy (which has a gazillion different kinds) and Czech Republic. In the most common types of Czech flours, the gluten content and milling size come in preset combinations:

The T number is the ash (i.e., mineral) content, measured by burning the flour, and it’s proportional to the amount of gluten protein. In other words, hladká and chlebová flours are quite fine and have medium and high gluten contents, respectively, whereas polohrubá and hrubá are coarser and have low gluten contents. As a point of comparison, in the US, I think standards specify that 98 percent of the flour must pass through a 212 μm sieve.

So we have a rough equivalence between US and Czech flours. My dear Czech expats and fellow Czech culture lovers, print this and tape it to your kitchen cabinet: T1000 chlebová = bread flour, T530 hladká = AP flour, and T400 polohrubá = cake flour. T450 hrubá, commonly used for Czech dumplings, doesn’t have a good equivalent – farina, maybe?

Bábovka generally calls for polohrubá flour, and this gives people a chance to split hairs: “The milling size isn’t the same, the result is different!!!” There is some mathematical truth to this for sure, and coarser flour absorbs more water. But I still have several solid arguments against going out of your way to buy Czech flour:

Maybe you could also write the recipe using teaspoons and cups instead of just grams. I am not sure how to convert.

Buy a scale, that’s the single most useful kitchen tool you can have.