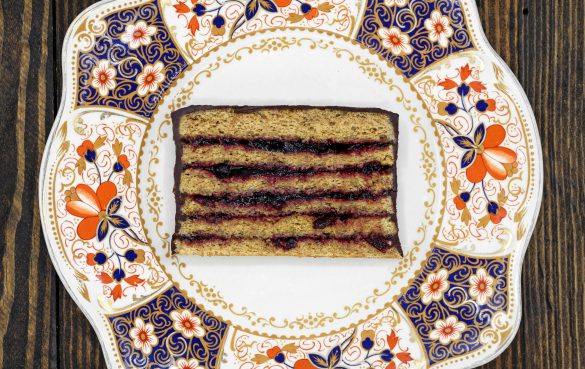 When my partner, tasked with finding a Russian-ish dessert recipe for me for a recent quarantine weekend, unearthed a rye bread cake in Joyce Toomre’s English translation of Elena Molokhovets’ A Gift to Young Housewives, she was intrigued but dubitative. It’s not just that recipe #985 (note: number varies depending on edition) is over 150 years old; it also doesn’t seem like one of Molokhovets’ most accomplished creations. Indeed, the recipe is full of oddities, inconsistencies, and omissions. The proportions are written for 6 people but the instructions use triple those amounts. We are told, among other things, to grind 50 cloves (a good way to finish that old jar in your pantry, but probably inedible!) and to mix the dough for a whole hour. Then all of a sudden, after baking, the cake is stacked and interlaid with jam with so few explanations that even Toomre felt forced to add a note – in which I believe she may have misinterpreted the instructions. Finally we’re told to glaze the cake, but not given any ingredients for the glaze…

Yet, despite its imperfections, I immediately took a liking to the recipe. With a little bit of imagination and a few tweaks, I could align it with my trip to the Arkhangelsk region and thus fulfill my quest for a dessert that would capture the essence of the Russian Far North. First, of course, because of the rye bread – rye flour plays an important role in baking in Northern Russia. Then, the spices reminded me of kozuli, a kind of Pomor gingerbread often made with cinnamon and clove. Finally, the vague ingredients (i.e., “jam” and “glaze” without any detail) gave me the opportunity to pack in a couple more Northern flavors: I chose blackcurrant jam because it evokes the blackcurrant tea we drank while touring the Lake Lacha countryside, and my (chocolate) glaze is spiked with Pomor or Karelian balsam.

The result is a layered cake that’s spicy, fruity, and chocolaty at the same time and goes great with a cup of black tea. Maybe it is worth tripling the proportions after all…

A word about the harder-to-find ingredients:

Potato Kalitka, the Pie from the Russian Far North