From the outside, Korzo Haus just looks like another hole-in-the-wall located in a forgotten block of the East Village — in so far as there is such a thing. Even the blackboards simply advertise your usual brunch, coffee and burgers. 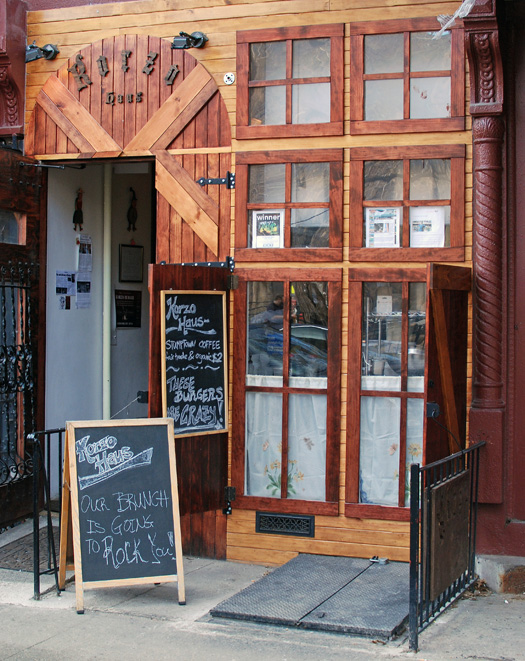 However, if you pass the short-order kitchen in front and inspect the diminutive dining room (which consists of a few tiny two-tops and a communal table that isn’t much bigger), you may notice the picture on the wall and wonder why the President of Slovakia chose to visit this place. You may also wonder which person on the picture is really the president (hint), but that’s beyond the point. The explanation comes when you read the menu: the dishes seem to come straight from a café at the trijunction between Austria, Slovakia, and Hungary. Austrian bratwurst and potato salad shares the scene with Slovak halušky with bryndza, and Hungarian langos and goulash. Many of these specialties are then rearranged into egg or burger offerings. There is no wine to rinse down the food, but there are about a dozen kinds of beer, mostly from Central Europe and the US.

If you choose to start the meal with the potato salad and happen to be sitting at the bar, you’ll be pleasantly surprised to see that the salad is prepared à la minute, entirely from scratch: 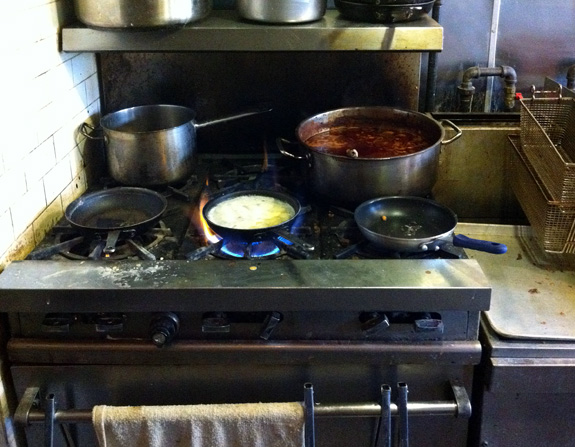 Okay, à la minute is a bit misleading, as it will take quite a few minutes before the dish finally hits your plate. But the result is worth the wait! I don’t hesitate to say this is the best potato salad I’ve ever had, mixing delicious potatoes with sautéed onions, bacon dice, and just the right amount of mustard. The bratwurst is served either on a roll, or with the same potato salad and some sauerkraut. The sausage was tasty and appropriately greasy, though not excessively so. 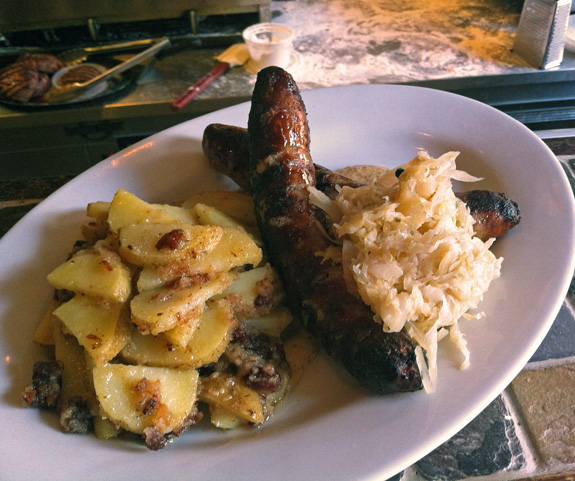 Moving on to Slovakia, we ordered the halušky (the Slovak version of spaetzle), which come with either bacon and chives or bryndza (a cheese similar feta). Simple but good. 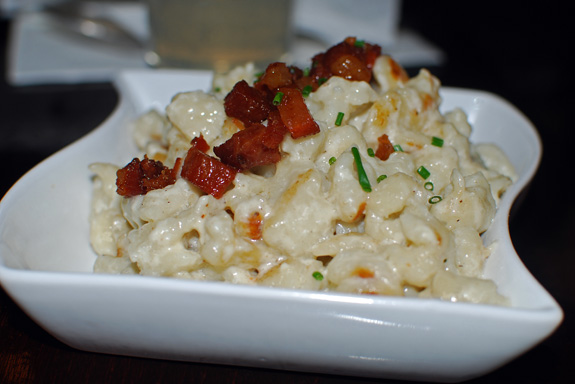 More halušky, deep-fried this time, arrived with the goulash, adding an interesting crunch to the spicy Hungarian stew that you see bubbling on the back burner in the kitchen. I found the beef brisket very tender, but too much caraway in the sauce overpowered the dish. 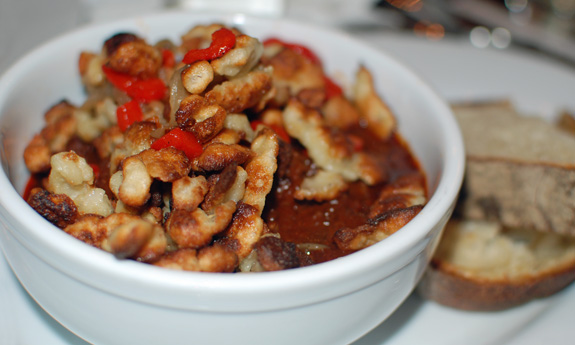 We completed the meal with a couple of the truly unusual Korzo burgers, which occupy half of the menu and change regularly. All of them are wrapped in langos (Hungarian fried bread) and served with the ever popular deep-fried halušky and an assortment of green apple, red cabbage slaw, and aioli. Looking in the kitchen, we saw that the one-man-show chef first grills the patties, lets them cool, then wraps them in the langos dough and deep-fries them: 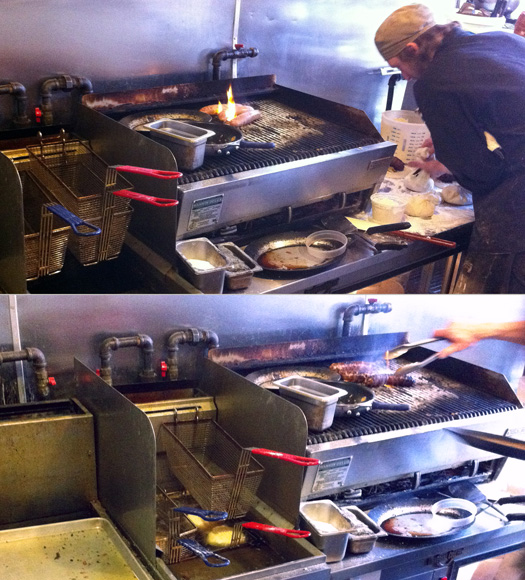 “The Original” came with bacon, emmentaler cheese, mustard and pickle. “The Slav” was topped with slow-cooked pork neck, saeurkraut and bryndza. Both were good and pleasantly decadent, and you hardly needed an appetizer before them. My main reproach would be that the meat was too packed (later on, I actually noticed that the chef was pressing those patties a lot). Ground meat in burgers is best if it’s pressed just enough to not fall apart. And while the deep-fried halušky went well with goulash, they were less satisfying with burgers. Not to mention I was reaching halušky saturation. Surely, there must be a Slovak fried potato specialty that could be tapped into instead. 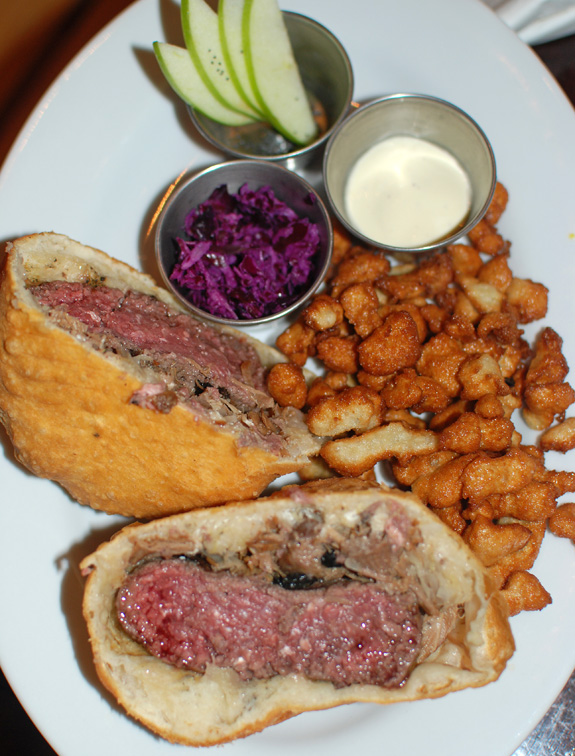 There were no desserts, and I don’t know where the kitchen would find the space to prepare them. Too bad — a slice of strudel would have fit perfectly.

[…] Boris’ Corner: Take a taxi to Korzo Haus. Sorry my recipe takes so long, but when you’ve spent 12 hours freezing in a tree stand to […]

[…] blocks for more complex dishes. The wait is now over, as today I present my own version of Korzo Haus‘ famous Korzo […]